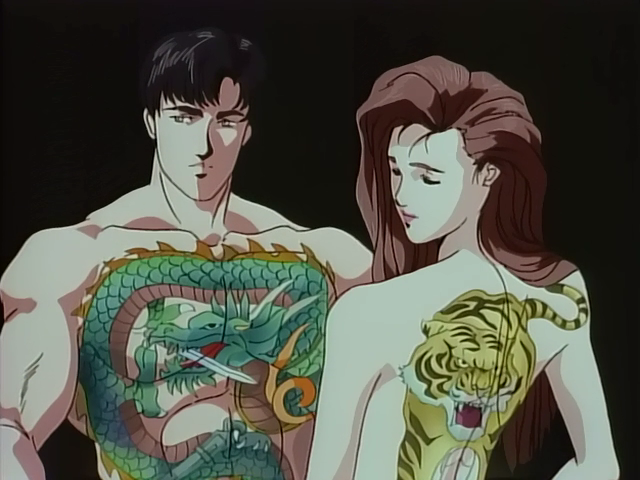 This sounds awful, but I used to judge the Crying Freeman series by their cover–or, I should say, by their title.

When I finally decided to give the Crying Freeman OVA a chance, I was struck by the level of emotion and detail crammed into six episodes. As you watch, you nearly forget that what you’re watching is animated, falling instead into a pit of despair along with the main character, Yo Hinomura. A simple potter, he stumbles across a film depicting the 108 Dragons, a Chinese crime syndicate. 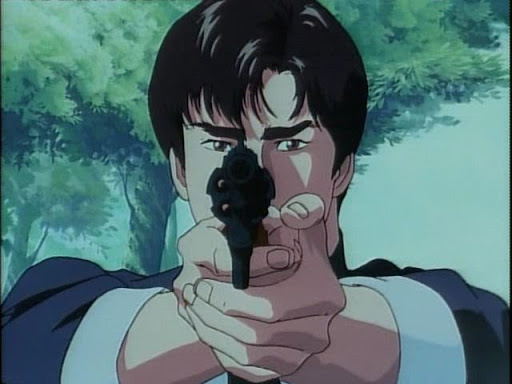 The 108 Dragons aren’t too pleased with the footage going missing, as it shows a certain assassination. Kidnapping Yo, they take it back, hypnotizing him in the meantime.

No, not brainwashing him to forget about what he’d seen or to make him do the chicken dance. Yo becomes the top assassin in the syndicate, trained by Mother Tiger in martial arts and given a humongous dragon tattoo on his back. Each life he takes brings back memories of his innocent former life. He is not permitted to forget.

Each time he kills, a tear falls down his cheek, earning the nickname ‘Crying Freeman.’ It’s a potent story, almost too human and too raw to imagine.

The story blends Yo’s unfortunate existence with his sudden romance and his wish to destroy the mental chains keeping him shackled to his life of crime. Eventually, he is seen committing murder by Emu Hino, a beautiful artist, who knows that Yu will be back to kill her too. However, things don’t go to plan, and the two end up falling in love. Yes, this complicates things massively.

An English dub came between 1994 and 1995 by Streamline Pictures, though they went out of business before the final episode could also be brought over. Luckily, A. D. Vision released the complete series in 2003, complete with episode 6 and the original cast.

But I’m getting ahead of myself. Before the OVA, as you’d expect, came a manga series. And this one is a true classic.

The Manga was Created by a True Master

The creator of the series was the late Kazuo Koike, who is often credited for his large contribution to the international growth of Japanese pop culture. (That’s a big reason why we here at OTAQUEST tip our hats to him.) 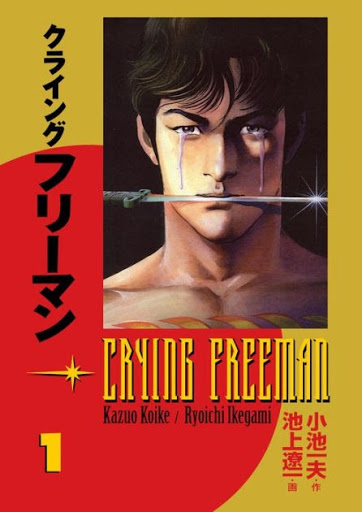 Koike didn’t just create manga–he was a novelist, a screenwriter, and a lyricist. Famously, he created the Gekiga Sonjuku program, seeking to teach a new generation of aspiring manga artists. Graduates of his program include Tetsuo Hara (Fist of the North Star), Keisuke Itagaki (Baki the Grappler) and, mentioned above, Rumiko Takahashi (Ranma ½, InuYasha.)

Along with Crying Freeman, Koike is most known for his works Lone Wolf and Cub and Lady Snowblood.

The artwork in the Crying Freeman manga series was done by Shogakukan Manga Award-winner Ryoichi Ikegami, who has also contributed to a number of popular series, including Mai, the Psychic Girl and Heat. He also provided the art and writing for Spider-Man: The Manga.

Originally, the manga was published in the west by Viz Media in the form of a comic book. Later, it was republished in typical graphic novel form, both as a normal-sized set and in larger volumes called the ‘Perfect Collections.’

In the late 2000s, they were republished once again, this time by Dark Horse Comics.

Not Many Series get Three Live-Action Films

Crying Freeman has been adapted for the big screen, though none of these films were created in Japan. Two were made in Hong Kong, the first being the 1990 movie The Dragon from Russia, starring Sam Hui and Maggie Cheung. While reviews vary, many people complain about much of the story being replaced with wire-fights and cheesy dialogue.

The second film was also released in Hong Kong, and also in 1990. A Killer’s Romance earned slightly more favorable reviews, praising the emotional performances and fight scenes in equal measure.

In 1995, the French-Canadian film Crying Freeman was released, though not in the United States. This was despite the fact that the classic Animerica magazine constantly promoted the film up to its release. It was only in 2018 that it was finally streamed on Amazon Prime in the US. But was it worth the wait?

In this incarnation of the story, Emu O’Hara, a young painter, sees the assassination of a Yakuza member. The murderer, who initially seems emotionless, begins to shed tears, introducing himself to the woman as only ‘Yo.’

The leader of the Sons of the Dragons, a Chinese crime syndicate, is responsible for a number of murders, and Yo wishes to put a stop to them before they can kill a friend’s son. Emu is pulled into the fray as the love interest, and to cause a number of problems for Yo along the way.

This French-Canadian film was directed by Christophe Gans, who has since gained notoriety for directing both the Silent Hill film in 2006 and the 2014 Frenco-German version of Beauty and the Beast. It featured some popular Japanese stars, including Masaya Kato (Re:Born, Kingdom) and Yoko Shimada (Kamen Rider, Shogun.)

The 1995 Crying Freeman film also featured Mark Dacascos in the title role. Even if the name isn’t too familiar, he’s been in just about everything, from Iron Chef and Hawaii Five-0 to John Wick: Chapter 3 – Parabellum and Dancing with the Stars. It was an excellent role to cast him in, as he’s won plenty of kung fu and karate championships.

Reviews are mixed, with some enjoying the story and others citing the lackluster acting as being the biggest issue. The film follows the manga perfectly, though it seemed to lack emotion. Luckily, it had enough fight scenes to earn back its budget.

Where to Read Crying Freeman and Watch the OVA

The Crying Freeman Manga is available for purchase on Amazon, either in paperback or digitally. You can also find copies straight from Dark Horse, including their own digital edition.

Sadly, the OVA currently isn’t available to stream. However, you can find the entire DVD collection for sale on Amazon. No, no Blu-ray, much to our eternal rage.

Both Hong Kong films and the more recent French-Canadian Crying Freeman film are available to purchase on Amazon in DVD format, though many are region-locked and won’t play on North American DVD players. Time to play the waiting game.