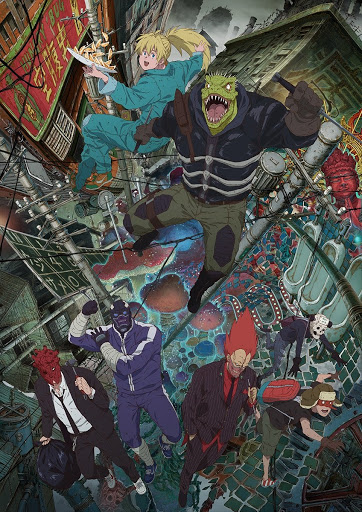 I’m a big fan of series that don’t shy away from the bizarre or the uncomfortable. I like something that pushes the envelope, not just in art style but in storytelling and lore as well; something that makes me more interested in the world as a whole. Sometimes, the main characters are the only thing that snag me, but in the case of Dorohedoro, the very first chapter had me hungry to know every piece of minutiae about this dystopian hellscape.

‘Hellscape’ is a very literal term here, by the way. Dorohedoro is filled with devils, sorcerers, cockroach people and a man with a lizard head seeking his lost memories.

It’s got zombies, drug use and a bad guy with the ability to turn anything into…mushrooms. Yes, really. If you’re wondering why that’s scary, well, I’ll invite you to experience the series for yourself. You need to see this.

The manga is an experience, and it is available in English if I’ve already piqued your interest. For you anime fans, you’ll be able to watch the series very soon on Netflix.

Now, how to even begin with this doozy of a story…

The apocalypse came, and with it, a new world order. Your typical run-of-the-mill humans live in a place called the Hole, a dreary and overcrowded megacity, while sorcerers live in their own land, the Sorcerers’ World.

The latter is bright and clean, and much more civilized. While humans and sorcerers may look similar, they are completely different species. Sorcerers were created by an ancient devil named Chidaruma, and didn’t simply evolve as humans did.

These sorcerers can produce ‘smoke,’ which is the source of their individual magical powers. Some have weak powers while others are capable of insane things, like controlling time or bringing the dead back to life. The weak live in the slums while the powerful rule the show. Typical.

Sorcerers often visit the Hole to practice their magic on the silly humans, not caring whether they live or die. If a sorcerer becomes powerful enough, they can transform into an immortal devil, respected deeply by all magic users. And, bonus, they get to work in Hell, where they torture the dead. Sign me up, right?

The story of Dorohedoro centers on Caiman, a human with a lizard head and zero memory of anything prior to being cursed by a sorcerer. You’re probably thinking ‘Oh, he’s on a quest to reverse the curse and regain his memories!’ That’s right, but the way he goes about his journey is the interesting part.

When he finds a sorcerer in the Hole, he puts their head in his mouth. Not to eat it, but because a mysterious face will appear to confirm or deny whether the sorcerer he’s munching on was the one to cast the spell or not. Oh, and Caiman is now immune to magic.

Friend Nikaido by his side, Caiman continues on his quest, fighting against the evil syndicate run by the En Family while he searches for a way to return to normal. As the story unfolds, we learn that Caiman’s past is a little more complicated than anyone could have expected.

Dorohedoro has One Hell of a Bizarre Cast of Characters

While the series has dozens upon dozens of wacky characters, here are a few you should know when jumping in for the first time. 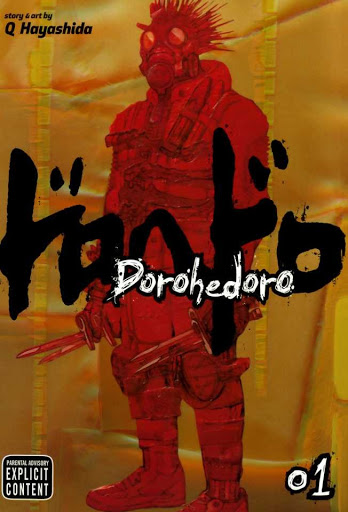 Dorohedoro began as a manga series, beginning serialization in Monthly Ikki in 2000. It continued to be featured here until 2014, when the magazine suspended publication.

After this, it moved to the short-lived Shogakukan manga magazine Hibana from 2015 to 2017, when it moved to its final home Monthly Shonen Sunday until 2018. Over its 18 year run, 167 chapters were published, which have been compiled into 23 volumes. In the west, these have been translated and released by Viz Media.

The creator of Dorohedoro is Q Hayashida, a rather mysterious figure in the manga world. Her real name remains a mystery, though in interviews she has stated that being a manga artist has always been her dream. As a child, her art was utterly terrible, and in art school she skipped most of her classes.

Eventually, she attended the Tokyo National University of Fine Arts and Music, where something clicked and she found the art style she’s known for today. Dorohedoro is her longest and most well-known work.

Many people praise her artistic sensibilities and her somewhat sloppy style, with extra kudos to her for making the super gross stuff she incorporates easier to swallow by finding the beauty within it. This is one of those artists that people seem to either really love or really hate, with few people in between.

Since Dorohedoro ended in 2018, she has been working on her new manga series Dai Dark, serialized in Monthly Shonen Sunday since April 2019.

In December 2018, it was announced that Dorohedoro would finally be getting an anime adaptation, and fans rejoiced. Premiering in January 2020 in Japan, it ran for 12 episodes, and it received an international Netflix release in May 2020.

The series was produced by MAPPA of Dororo and Banana Fish fame, immediately speaking to the quality of the animation you can expect. It was directed by Yuichiro Hayashi, who previously directed both seasons of Kakegurui. 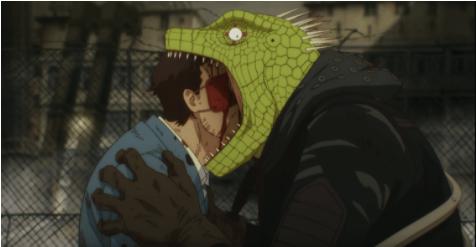 Dorohedoro has some of the most creative characters I’ve ever seen in an anime series, period. Staying true to Hayashida’s works, Tomohiro Kishi worked as character designer for the anime series. Previously, he created the memorable designs for characters in 91 Days, and worked on key animation for Naruto Shippuden and Honey and Clover II.

The music in the series was composed by (K)NoW_NAME, a J-pop group specializing in anime music and soundtracks. Signed under Toho Animation Records, the members have an impressive resume, with Makoto Miyazaki previously composing for One Punch Man and R. O. N. composing for FLCL Progressive and Alternative.

The theme song? It’s a bop. And it’s filled with nothing but gyoza-making.

As previously stated–though I think it bears repeating–Dorohedoro will premiere worldwide on Netflix on May 28, 2020. A little patience will go a long way.

If manga is more your style, all 23 volumes are available for purchase from the online bookshop of your choice, including Amazon, Barnes and Noble, Walmart and more.