What Is Higurashi No Naku Koro Ni? 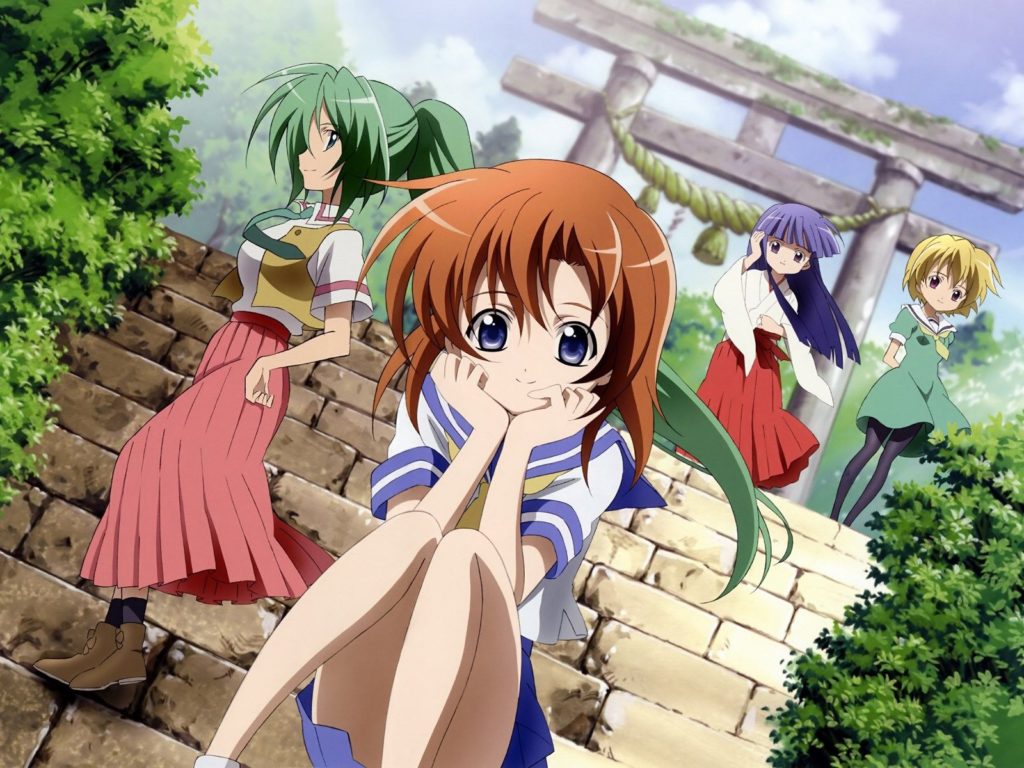 Higurashi No Naku Koro Ni, also referred to as “When They Cry”, started off as a horror-themed mystery dōjin visual novel series that debuted in the summer of 2002. The saga is most famously known for its anime adaptation. These were written and produced by Ryukishi07, who is the lead member of 07th Expansion.

The series follows a group of young friends trying to solve the mysterious happenings of the small town of Hinamizawa during the summer of 1983. If you thought your coming of age summer experiences with your friends were risky or scary, try stomaching watching these characters overcome torture, psychosis, and ancient demon curses.

Who Are The Characters In Higurashi No Naku Koro Ni?

What Is Higurashi No Naku Koro Ni About?

The series focuses on a group of students, switching narrators in every new arc, while they try to navigate the bizarre occurrences that start around the time of the annual town festival.

The arcs in “When They Cry” are as follows:

The arcs in the sequel are as follows:

In the first arc, we follow Keiichi Maebara who has recently relocated with his family to the rural village. Despite being the “new kid”, he enjoys the antics shared by his new friends Rena Ryuuguu, Mion Sonozaki, Satoko Houjou, and Rika Furude.

During preparation for the festivities, we learn about the lore surrounding the town legends. In the past few years, the event has brought both the death and disappearance of several townspeople. These misfortunes have all been linked to the village’s god, Oyashiro.

After Keiichi inquires about the incidents, his friend group remains quiet about the dark mysteries surrounding their hometown. As time passes, more and more horrifying situations occur, creating more questions without providing any answers.

In Kai, Rika Furude is determined to end the seemingly never-ending cycle of whatever is cursing the town of Hinamizawa and the lives of her close group of friends. Instead of this season being separated into arcs, this anime runs in a consistent stream of continuity.

How Many Ways Can I Learn About The Higurashi No Naku Koro Ni Universe?

The When They Cry series has been distributed to the world through multiple forms of media. It was originally created as a visual novel that was first put out on PC. The first arc, Onikakushi-hen, made its debut on August 10, 2002. The final game, which is the 8th in the installment, Matsuribayashi-hen, came out in 2006 on August 13th.

On December 31st, 2006, a fan disc was also released called Higurashi no Naku Koro ni Rei. In this series, there are three chapters called Saikoroshi-hen, Batsukoishi-hen, and Hirukowashi-hen.

The official English debut of the Higurashi series is currently on Steam. The game was published by MangaGamer and they have currently put up all of the arcs except for Matsuribayashi-hen.

The game was then adapted into two seasons of anime. The Higurashi anime was animated by Studio Deen, and the first season premiered in Spring 2006. The second premiered in the Summer of 2007.

The visual novel was also adapted into a manga series. The serialization was released with 14 story arcs that first began being published in Spring 2005. The novels are written by Ryukishi07 and the series has multiple illustrators that were responsible for one or more story arcs each.

What Is The Higurashi No Naku Koro Ni Live-Action Movie?

Higurashi no Naku Koro Ni the live-action film is written and directed by Oikawa Ataru.

The plot of the movie revolves heavily around the story of the first Question Arc, Onikakushi-hen. The piece of cinema was produced by Phantom Film and debuted on May 10th, 2008. It was distributed internationally under the title Shrill Cries of Summer at the European Film Market and the Cannes film festival.

It was broadcast across 60 movie theaters and earned 200 million yen in ticket sales. Despite its popularity, it was never given a home video release outside of Japan. It was subtitled and distributed by fans online to different countries years later.

What Impact Does Higurashi Have On Japan Today?

In the most recent news, a Higurashi game was recently adapted onto the Nintendo Switch eShop. The game comes in more than one physical package. There are the standard version and the version which comes with both the drama CD and visual book.

There was also a Higurashi-themed stamp rally held back in 2018. The real-world town of Shirakawa was well-known for its thatched-roof houses that made it into a UNESCO Heritage Site. However, the village gained more popularity after the author of the Higurashi series, Ryukishi07, used photos of the village and its locations for his made-up horror zone called Hinamizawa.

Shirakawa has welcomed both regular tourists and anime tourists as a result. After the release of Higurashi no Naku Koro ni: Hou on Nintendo Switch and PlayStation 4, the village became home to a stamp rally. The stamp rally encourages fans to visit the signature sites from the series, all while receiving a limited edition Hanyu badge.

You follow the trail all the way from the tourist information center, down a pathway with six stops and a stamp at each stop. Fans of the series can explore and immerse themselves in the inspirational locations that the fictional horror story was based on.

Where Can I Enjoy Higurashi No Naku Koro Ni?

If you want to watch the first season of Higurashi No Naku Koro Ni in all it’s glory with subtitles, you can watch the entire first season on Hulu. It’s the best place to watch all the iconic, gut-wrenching torture scenes. (I haven’t looked at fingernails the same way since).

If the manga is more your style, Yen Press has published and distributed all the volumes of the series for you to read. Their website provides links on where you can buy the physical copy of the graphic novels in stores.