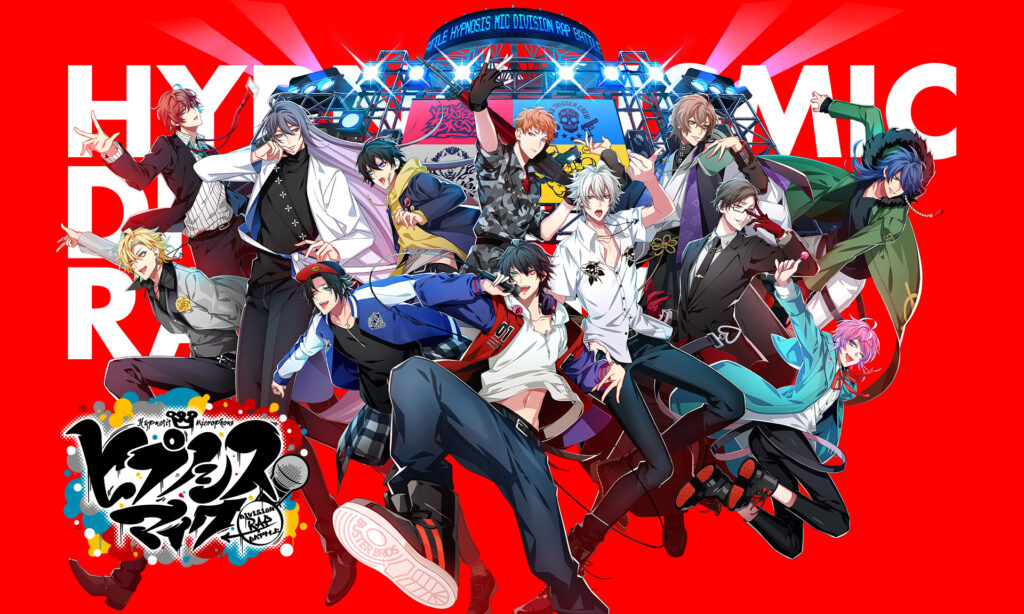 Hypnosis Mic is a multimedia franchise that, until October, was mostly an unknown quantity outside of Japan. Franchises whose origins are rooted in mediums outside of anime and manga, particularly those targeted at women such as Hypnosis Mic, are easily overlooked in English-speaking territories. While the series certainly had fans outside of Japan before the anime’s premiere last month, it can be assumed that most people will be encountering this series for the very first time through the new anime.

Over time, the multimedia franchise has grown into a sales juggernaut in Japan with very little analysis outside of its home country regarding the series. With that in mind, what is Hypnosis Mic, and how did it grow from a set of musical concept CDs to the best-selling franchise it is now? More importantly, why do fans gravitate towards the series, and what makes it so appealing?

I don’t necessarily want to discuss the roots of hip-hop in Japan here. While relevant, what makes Hypnosis Mic appealing is how it blends trademarks of the genre with male pop idols and anime culture to form something unique. If you want to learn about hip-hop in Japan you can view our coverage of artists like Chelmico and SUSHIBOYS. This piece intends to primarily focus on how Hypnosis Mic adapts the genre to create an appealing, female-oriented rap battle multimedia franchise.

So, What Is Hypnosis Mic?

That’s a more difficult question to answer than it would first appear.

Conceptually, the series is strange from the outset. The premise behind the music is an alternate modern-day Tokyo following a war that devastated the world and brought a new female-led government to power that banned all weapons. Men have been sent to live in designated Divisions where territory and disputes between divisions are handled through rap battle using the Hypnosis Mics that amplify the human spirit. While weird, slightly problematic yet somehow engaging, I don’t want to focus on it too much. To understand the franchise, the concept isn’t all that important.

Hypnosis Mic as a franchise sought to capitalize on two expanding markets in the Japanese entertainment industry: the rising popularity of rap and hip-hop, especially in the increased proliferation and popularity of music produced domestically in Japan, as well as the growing market within the anime and manga industry for otome series targeted at women featuring popular male talents and voice actors.

The roots of Hypnosis Mic’s appeal come from otome games and the fandom surrounding popular seiyuu. Otome games typically center a self-insert female protagonist in a story featuring several attractive male characters. Throughout the game, players will get to know this array of characters and, perhaps, form an emotional or romantic relationship with one of their doting male companions. While some otome titles earned notoriety beyond the medium of games through adaptations, the proliferation of otome-style multimedia projects can be traced to the early 2010s and the blockbuster success of the Uta no Prince-Sama franchise.

This series similarly utilized a musical concept by following Haruka Nanami as she joins a prestigious music school with dreams of becoming a composer, soon becoming acquainted and the center of attention for several attractive male classmates. Starting as a PSP game, the game was a major success that only grew with later adaptations as anime, manga, stage plays and more, and was soon exploited with music releases, concerts and merchandise.

The success of Uta no Prince-Sama helped usher in an era of multimedia franchises targeted at women that aimed for similar mass appeal, of which Hypnosis Mic is one of the more successful examples that has bubbled to the surface thanks to music and a concept that helped it stand out. Another factor in the success of both franchises is the use of popular male voice actors employing the brand nature of male seiyuu.

Popular voice actors like, for example, Mamoru Miyano, are more than their voice and often hold careers outside of their voice acting roles in fields such as music, with even their personality holding a level of brand appeal that can be used to attract a fanbase to a product. Hypnosis Mic, in turn, features popular voice actors in many of the key roles for each Division. Jiro Yamada of Buster Bros is voiced by Ishiya Haruki, while Samatoki Aohitsugi of the Mad Trigger Crew is voiced by Shintaro Asanuma.

While it may have taken inspiration from predecessors to court the intended passionate female fanbase the franchise now fosters, the series has moved in a bold direction from the start and grown from strength to strength in just 3 years since its introduction in 2017. Released under the King Records sub-label Evil Line Records, the series initially started as nothing more than a concept and a series of 4 concept CDs released under each of the 4 main rap-battle groups. 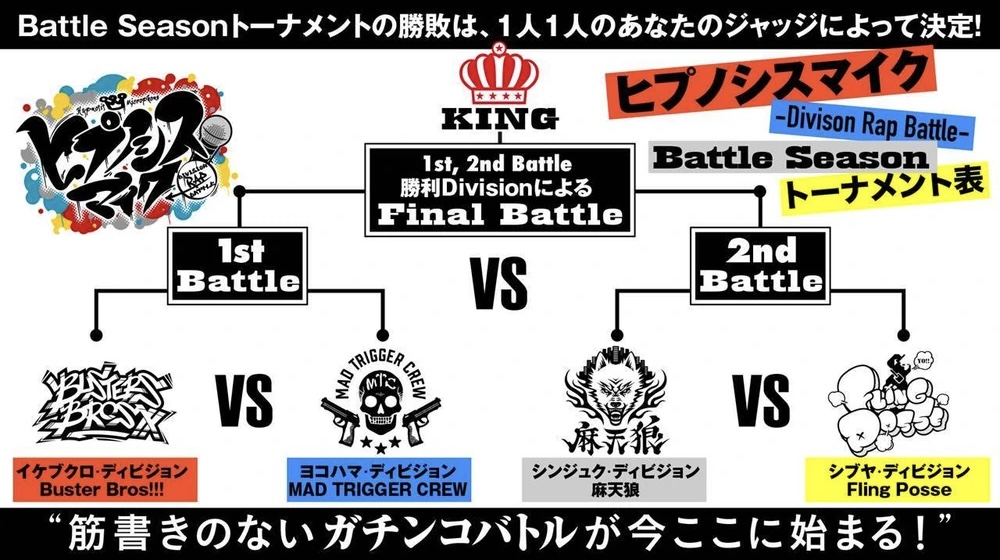 The series has only grown stronger since then. Leaning into the concept of rap battles, various CD releases and concepts have been themed around competitive battles between the groups, with many releases including voting tickets that allow fans to vote for their favorite artists that classify which group ends up as the ‘winner’ of the rap battle. Such sales techniques alongside the group’s general popularity have helped propel them to the top of the Oricon charts.

Soon after, the series expanded into other mediums beyond music. In-person concerts saw the voice actors duke it out on stage, and before long we had manga, a rhythm mobile game in the style of a hip-hop Love Live game and, now, an anime.

The evolution of the medium over the past decade has facilitated the growth of multimedia franchises aimed at women, through which Hypnosis Mic found success by bringing something new to the table with its rap battle concept. Yet this only describes why Hypnosis Mic was successful. I’m not sure this describes what makes the series appealing.

So what’s the appeal?

There’s a cynical explanation. The series undoubtedly has a wide array of male characters that neatly fit into archetypes, all while leaning heavily into regional pride both inside and outside of Tokyo to foster tribal loyalty. Like Ikebukuro or Shibuya? Maybe those Divisions are for you. Want some local pride and live outside of Tokyo? Yokohama, Osaka and Nagoya Divisions now exist!

Not only is the Japanese hip-hop genre on the rise in the Japanese music scene, but the genre also lends itself well to franchising. Rap battles can boost sales and create a sense of investment for a fan into a group and character. Mix in voting for the winner of a rap battle based on voting slips in CDs which could encourage fans to invest further to support their favorites, and you have a relationship mutually beneficial to both parties.

Still, I don’t feel like this is the appeal of the franchise for many.

One sub-group within the Hypnosis Mic project brings the Tokyo Division leaders together to form Dirty Dawg, and this group made a rare non-Hypnosis Mic appearance at the Evil a Live 2019 to celebrate the 5th anniversary of Evil Line Records. Hosting the likes of Momoiro Clover Z, Teddyloid and more, I had a lucky chance to attend the sold-out concert in the summer of last year in Yokohama.

Attending thanks to a spare ticket from a kind Hypnosis Mic fan, the event proved to be a first exposure to the bizarre yet endearing world of the franchise. They opened the concert with a special collaborative tune and performed a later set aimed at audiences old and new, bringing with them a contagious electric atmosphere among fans and non-fans alike. 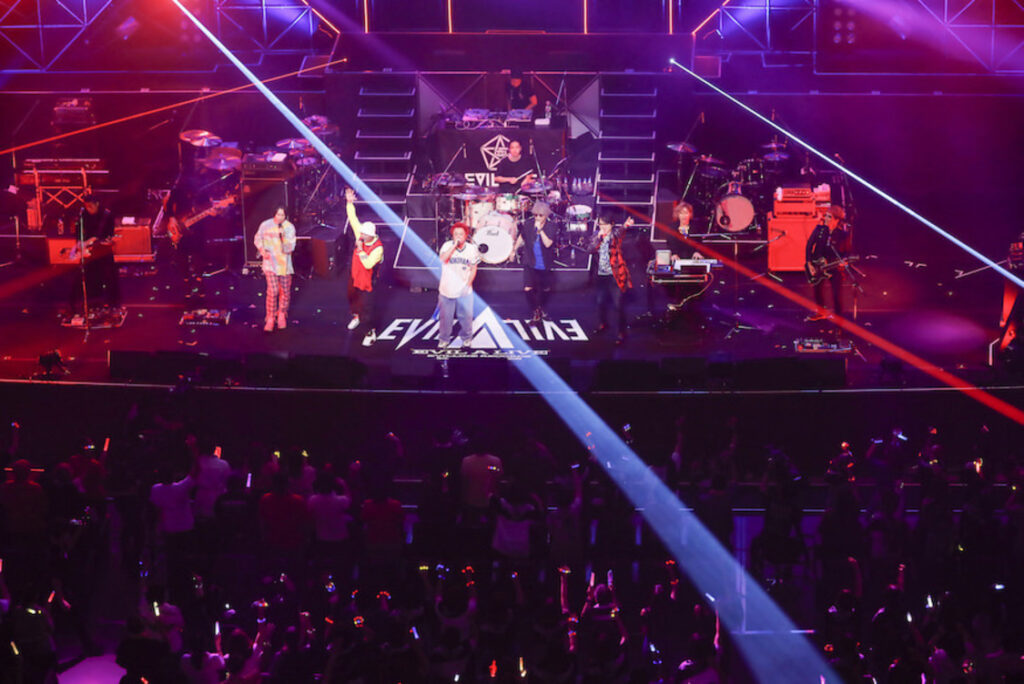 As soon as they stood on the stage, a sea of rainbow hands lit in colored rings for each member bounced in the crowd time to the music. Even as someone used to the sea of color associated with idol concert penlights, it was hard not to gawk and be impressed. And the music was a lot of fun! The rap itself incorporated clever wordplay and rhyming, with the voice actors enhanced it with great vocal and physical performances.

Being driven by charismatic voice actors enhances the musical core of the franchise, in this respect. Each character sounds and acts so differently from one another that it results in tonal shifts not traditionally found in the genre. In a live venue, it brings a new atmosphere to a live hip-hop performance, creating a unique experience that stays with you long after the fact. Even listening to studio recordings, the characterization and personality of the series stand out. It’s just good music!

A cynical person can point to success as a result of launching in the right place at the right time and clever marketing. In reality, the appeal and charm of Hypnosis Mic comes from creating entertaining music with talented music producers like Teddyloid, invisible manners and more, fleshed out with engaging characters.

Give Hypnosis Mic a chance. The anime is fun, the music is entertaining, and there’s a lot to like here. You just might be surprised.