What Is it Like to Attend the Kirby Cafe?

After literally months had passed between making my reservation for a table at the Kirby Cafe and the date on which this reservation was made for, it was perhaps fitting that the location of the cafe on this particular day was eerily similar to that of a final boss level in terms of its atmosphere. The mist and fog on this particular day were intense, and as we stood awaiting our timeslot at the base of Tokyo Skytree itself, the weather had transformed this feat of engineering into an eery fantasy-like tower whose peak could not be seen through the low-lying thick clouds that punctuated the air… the mood was set. 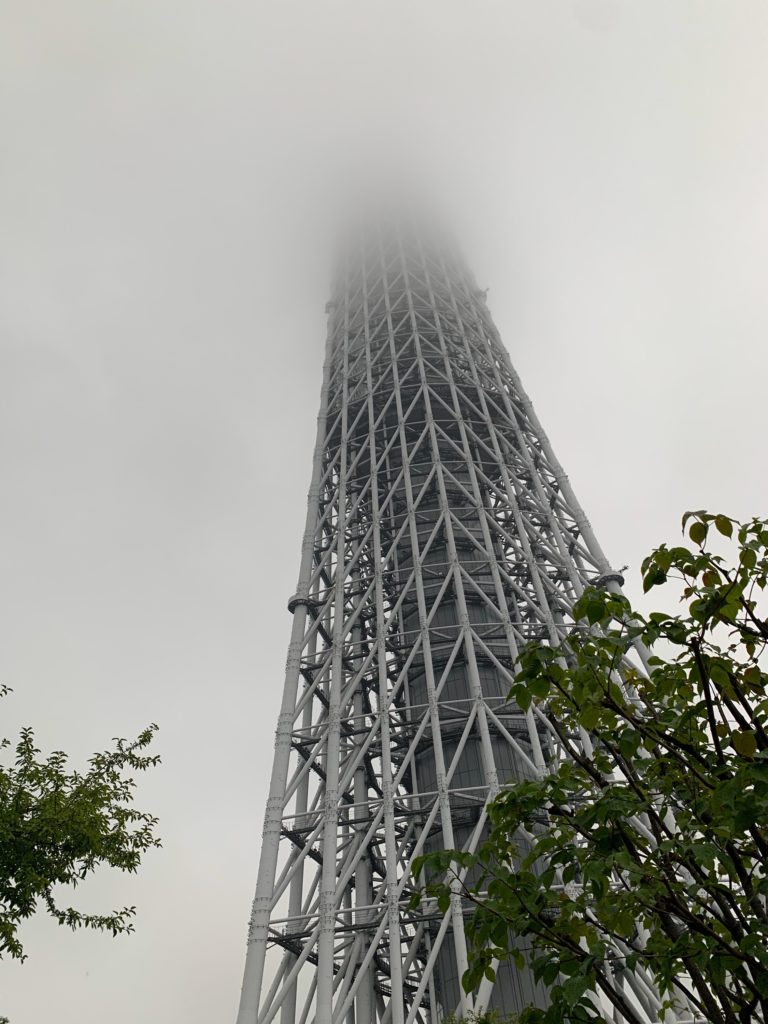 Of course, the weather and the ominous metal structure seemed to betray the summer vibe the Kirby Cafe, which stood in its shadows, wanted to portray to those lucky enough to have secured a meal at this hard-to-access eatery. After all, alongside the ever-present cheery Kirby statues that have sat outside the cafe ever since 2018 (a supposedly temporary set-up that has been constantly renewed ever since with new themes due to its popularity), special wall-sized posters for the current cafe theme, ‘Kirby Cafe Summer’ are boldly on display. I have to say, Kirby in a rubber ring and the pastel blue color scheme perhaps betrayed the reality of the season as it was felt on that day.

While I didn’t know what to expect going into the cafe other than the food that I had glimpsed on its website (which is partially why I wanted to write about my experience with this article), as the minutes crept ever-closer to the time of our reservation my excitement kept ever-rising, reaching a fever pitch just as we were allowed in. The entire cafe felt rather homely, between the flower arrangements and open cafe props with Kirby and Waddle Dee hidden within them to the staff in Hawaiian shirts for the summer theme, the cafe’s appearance was as welcoming as the pink blob it was celebrating. The only thing perhaps out of place in this regard was the summer-themed photo spot you could have a photo with as you went inside. 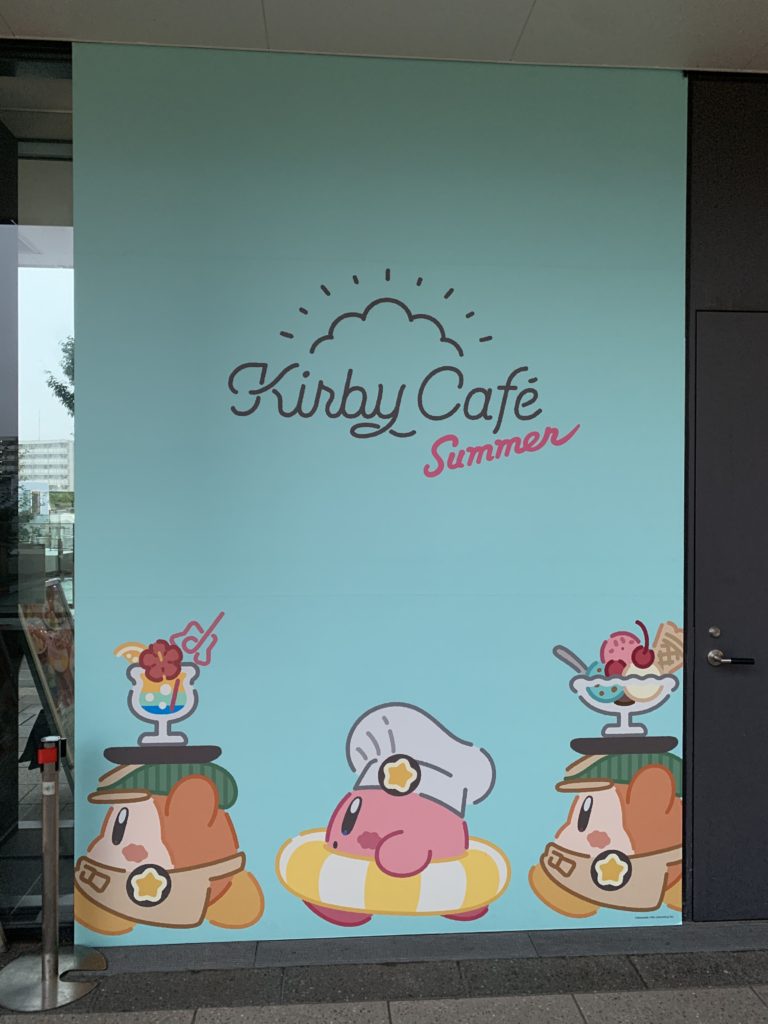 Once we were sat down it was time to order. I mentioned this while writing about the Zombie Land Saga Cafe in Ikebukuro a few months ago, but one thing you have to understand when going to a collaboration or themed cafe such as this is you are paying partially for the experience when you buy your food. In that regard, the food is a little more than you would perhaps expect to pay were you ordering the same type of food elsewhere. The Kirby Cafe was arguably a further price increase on top of this, but in return, you would also receive substantial bonus goodies with whatever food (or drink) you order. Forget the drinks coasters or flags, these were much larger in scale.

The food that I and my friend ordered were both rather different. I chose to order the 2,450 yen Whispy Farm Curry, The Ultimate Course, which mixed steam veg, rice, thick meat curry and, hidden inside Whispy Woods, mashed potato and melted cheese. Brought out alongside the meal was a set of Tabasco sauces with cute Kirby designs on them to use on the dish. Alongside this, I ordered the Ice Mug Heat (1,980 yen), a jar drink made up of orange slices, whipped cream and a rather citrus-like coke soda, while for the dessert I had the Meta Knight Fondue and Lava cake (780 yen). When it comes to freebies, though, their rather high prices were justified by receiving a free mug glass with the drink and a choice of either a ceramic Kirby or Waddle Dee with the curry (of which I chose Kirby, obviously).

My friend, on the other hand, went with Kirby’s Summer Vacation (2,450 yen), a meal mixing egg, rice in the shape of a rubber ring, pasta and more with its own small yogurt dessert included, the Fruity Forest jar drink (1,980 yen) which was a carbonated drink with a variety of fruits floating inside it alongside a Maximum Tomato Maximum Recovery Plate (2,480 yen), its own mix of desserts. Here, the Summer Vacation also came with a ceramic Kirby or Waddle Dee while the jar drink also came with a jar glass, with the maximum tomato coming with another ceramic Kirby or Waddle Dee and a Kirby Cafe plate.

It can at times feel that the promotional photos for a cafe fail to live up to the reality of the food in the picture, yet that wasn’t the case here. Rather promptly (perhaps a good thing given our time was limited to 75 minutes) our first meals arrived and they looked almost identical to the photos found online and in the menu. The only thing missing from the Summer Vacation and Ultimate Course was the ceramic character pieces, and that was because they were brought to the table brand-new and in their packaging. I chose to move mine for photos, but this was nice for those who didn’t want to sully them up.

When it came to taste, it was pretty nice too. The Tabasco gave you a choice of 4 different levels of spice, and, naturally, as someone who has never had Tabasco sauce before, I chose the second level out of the four. Luckily I was able to handle it (I can handle some spice) and the rest of the meal was equally delicious. My friend seemed to enjoy their choice as well based on their own accounts, and the drink was a refreshing compliment to the meal as well, though unlike my friend’s more fruity choice there wasn’t really an ability to have the orange slices other fruit pieces inside the mug once the drink was finished. For dessert, on the other hand, the lava cake was a very nice closing to the meal.

The entire meal is perfectly complemented by the setting I described earlier and the special Kirby Cafe soundtrack that was playing during our time inside. When the Cafe first opened in 2016 in multiple locations, a special soundtrack CD of remixed music was released and played while eating at the original locations for the cafe. This music was playing for this visit as well, the recognizable medleys of the series given a more soothing tone that remained familiar yet relaxing, keeping to the theme without ever getting in the way of just attempts to have a conversation and enjoy the experience in your own way. 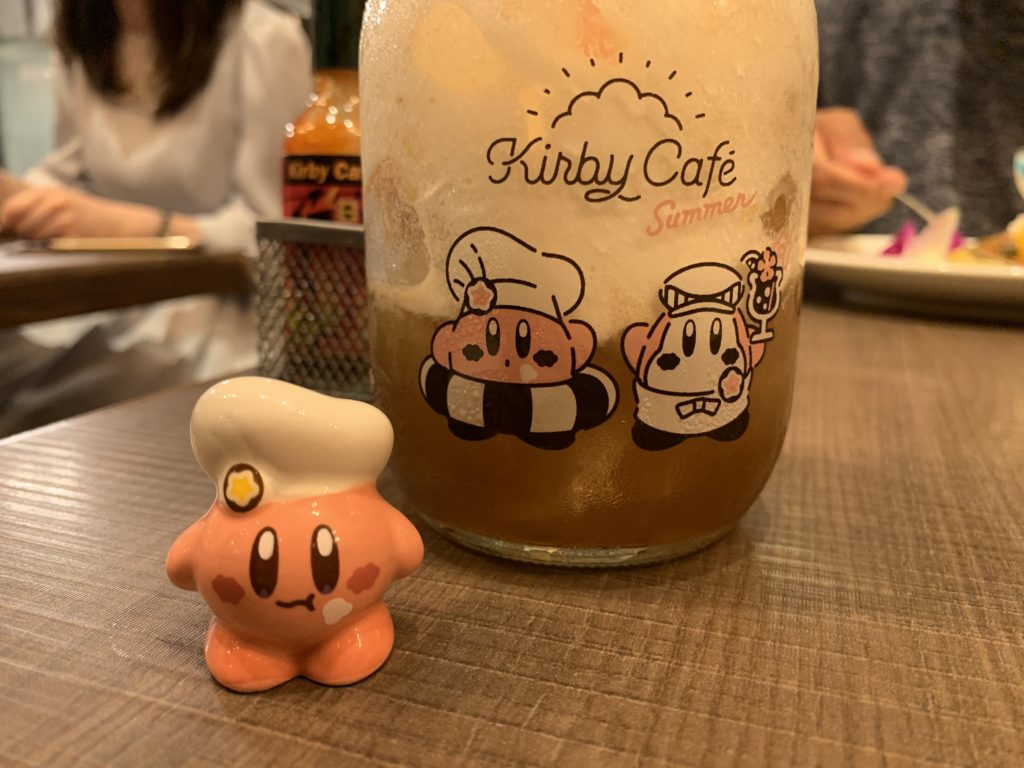 While I chose not to purchase any extra merchandise on the way out (between a previous visit to a store located outside the cafe and the freebies with the meal I was satisfied with what I had), when you decide to leave at the end of your time in the cafe you have the ability to purchase a variety of Kirby Cafe-themed merchandise, from adorable Kirby plushes to small canvases to the aforementioned soundtrack CD, rather nice canvas bags and more. while I didn’t buy anymore, I did have to relinquish my will when it came to the gacha, unfortunately not getting my desired prize but still happy with what came out of the machine.

Although the sun had set in the time we were inside, the clouds hadn’t cleared, the warm and inviting atmosphere of the cafe replaced by the rather breezy and eery stillness of what should be a bustling tourist attraction left mostly empty by the middling weather and darkness. With one check back to ensure I had all my belongings, the two of us returned to the train station and went home.

Is the experience worth it? If you’re a Kirby fan, then it 100% is worth your time. The theming and food alone ensure that. It’s not cheap, however. My choices of food and drink tipped the meal over 5,000 yen, and that’s without the purchase of merchandise at the end. Although it was nice to receive some really cool bonus items (a Kirby I display on a desk and glass I use for drinks), the way it bumps the prices further is an unfortunate consequence of this. As long as you keep this in mind (and book enough in advance), I see no reason why you shouldn’t be able to thoroughly enjoy your experience here.

After all, I sure did. 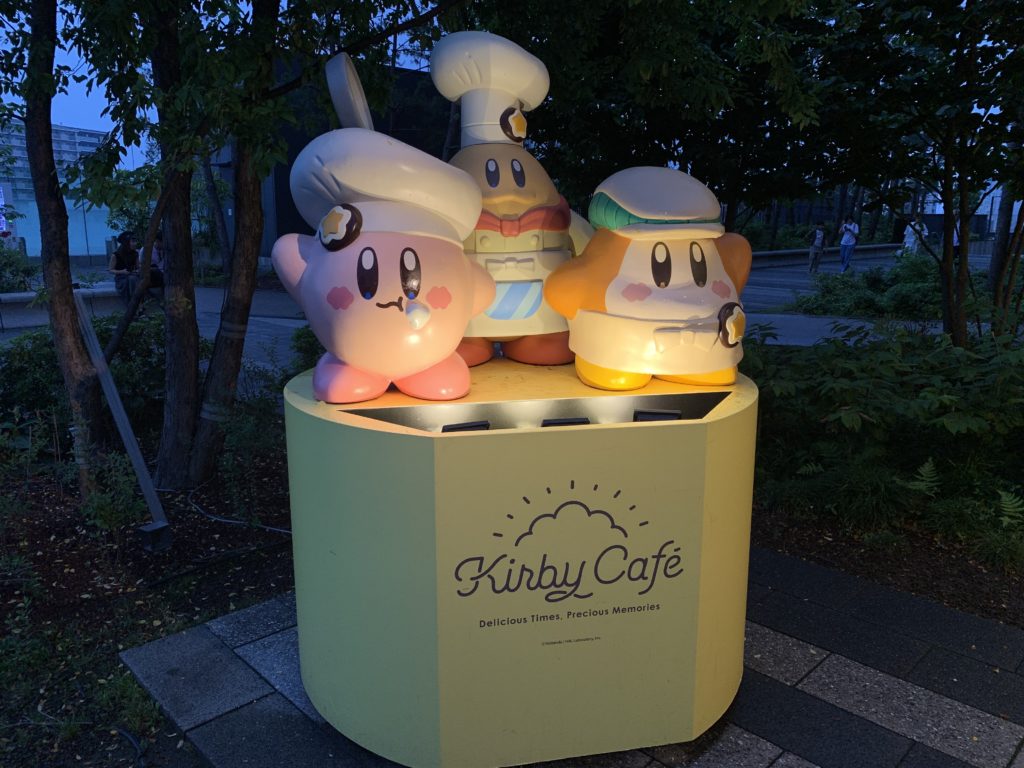 You can find more details about the Kirby Cafe over on the official website.