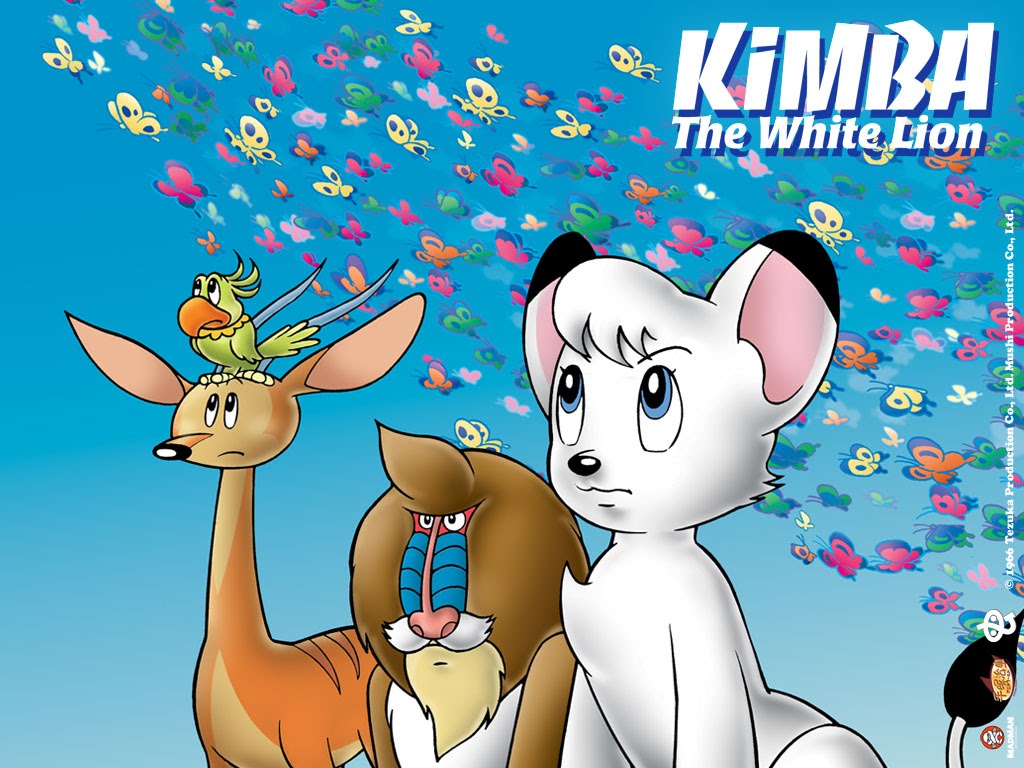 Before we begin, let’s get one thing out in the open — yes, Kimba The White Lion is the jungle adventure anime which maybe/ probably inspired and/ or influenced Disney’s The Lion King.

We’ll have more about “Kimba the White Lion vs. The Lion King” later. But first, who was Kimba?

It all started with Osamu Tezuka. Tezuka is sometimes called the Father of Manga or the God of Manga. Or, you can combine the two and call him the Godfather of Anime.

Sometimes he is even called  “The Walt Disney of Japan,” although that is a title that he shares with Hayao Miyazaki.

Before he created Astro Boy, Princess Knight, Phoenix, or Black Jack, he created a manga called Jungle Taitei, or Jungle Emperor.  This was in 1950, a year before Captain Atom — the manga which would lead to Astro Boy.

Jungle Emperor would last from November 1950 to April 1954. It would be made into an anime TV series, Kimba the White Lion, in October of 1965.

Both the manga and anime versions of Jungle Emperor tell the story of a pride of lions.

The story is set in Africa when mankind is starting to push into the jungle.  People don’t seem to exist in the Lion King, but they are a problem in Jungle Emperor/ Kimba the White Lion.

Panja, a white lion, is King of the Jungle. He is also soon to be the father of a cub.  Panja’s mate, Eliza, is Kimba’s mother.

The jungle’s carnivores need food. The local human village’s cattle would seem to be ideal — and that’s where all the trouble starts.

The villagers bring in a hunter to stop Panja from raiding their cattle. The hunter traps Eliza and kills Panja.

Eliza is shipped to a zoo, and Kimba is born on the ship. Kimba is white, like his father.

As if things weren’t bad enough, things don’t go well on the way to the zoo.  A huge tropical storm sinks the ship, and Kimba must escape.  Kimba manages to swim back to Africa.

After he escapes from the ship, Kimba is cared for by some humans. The exact details are different in the anime and in the manga, but the basic message is the same — not all humans are bad.

This lesson sticks with Kimba, and it shapes his outlook on humans, living in the jungle, and civilization.

Upon his return to his jungle kingdom, Kimba has numerous adventures with his friends.   In both versions, Kimba believes that there can be harmony between the jungle animals and humans.

Kimba also understands human language, which is a huge help.

Eventually, Kimba grows up and has his own mate and cubs.

From the very start of the story, there are significant differences between Kimba the White Lion, and The Lion King.

Kimba’s story doesn’t have nearly as many obvious parallels to Hamlet.  The Lion King is filled with them.

The old king, Mufasa, is killed by his brother, Scar.  Scar takes the throne.   Eventually, Simba gets his revenge on his uncle, although he doesn’t die in the end.

In this scenario, Scar is effectively Claudius. Simba is Hamlet, only without the soliloquies. He doesn’t act crazy, but he does need some time before he’s ready to face Scar.

There is a talkative and boring advisor — Zazu is Polonius.  The nutty meerkat/ warthog combination of Timon and Pumbaa are The Lion King’s equivalent to Rosencrantz and Guildenstern.

The two goofy sidekicks even get their own version of the Tom Stoppard comedy, Rosencrantz and Guildenstern are Dead, called The Lion King 1½. It’s a comic re-telling of The Lion King, with a lot of silly stuff happening in the background of the main story.

Kimba the White Lion has many of the same Shakespearean elements as The Lion King, such as the two comic relief sidekicks, a wise old advisor, etc.

Kimba has to reclaim his rightful place as King of the Jungle after the death of his father. There is a bad guy who has taken the throne.  But unlike Cladius or Scar, Claw wasn’t directly responsible for the death of the old king.

In short, it’s not a full-fledged re-telling of William Shakespeare.

As we noted earlier, there are also humans in Kimba the White Lion, and this makes a huge difference in how the story unfolds. 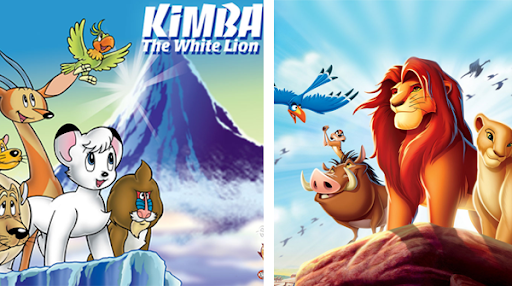 People who were familiar with Kimba began making comparisons between the two soon after The Lion King came out in 1994.   The Los Angeles Times had an article, “A Kimba Surprise for Disney,” the day after the movie opened.

Even The Simpsons made fun of the controversy, with The Lion King’s Mufasa accidentally telling Simba, “You must avenge my death, Kimba… I mean, Simba.”

The controversy came back to life when the live-action The Lion King remake was released in 2019.

Some of the characters are uncannily similar. Young Simba looks like Kimba, the names are one letter off. Kimba and Simba have similar friends and allies and the evil lions Scar and Claw are also very much alike.

And some of the artwork is similar.  A scene from the manga shows Kimba’s dead father appearing as a cloud — very similar to the “Mufasa-in-the-clouds” scene in The Lion King.

Matthew Broderick, who voices grown-up Simba in The Lion King, even told the Austin American-Statesman, “I thought [they] meant Kimba, who was a white lion on TV when I was a little kid. So I kept telling everyone I was going to play Kimba.”

Another interesting bit of evidence comes from The Lion King director Roger Allers. He had lived in Tokyo, where he had been an animation director for Tokyo Movie Shinsha’s version of Little Nemo: Adventures in Slumberland (1989), which suggests that he had to be familiar with Japanese anime.

People at Disney have denied the connection, and with no smoking guns — a memo or some other direct evidence — they had plausible deniability. When the new The Lion King came out, they continued to deny it.

“I think in the recesses of my memory we’re aware of it, but I don’t think anybody consciously thought, ‘Let’s rip off ‘Kimba,’” a Disney animator told HuffPost Entertainment.

“It was never discussed and there was no intentional parallel ever made that I was ever aware of,” The Lion King director Rob Minkoff told SyFy Wire.  Minkoff went on to say that when the parallels were pointed out to him after the film was made, “it gave everyone pause, I think, to look at it and go, ‘Wow, there is a lot of similarity.’ ”

The anime was edited into a Kimba the White Lion film in 1966.

An English-language dub of Kimba the White Lion was broadcast in the United States in 1966.  In this version, Panja is Caesar and Kimba is Leo.

Season 1 of the 1965 (Watt) version of Kimba the White Lion is currently unavailable on Amazon Prime, although the episodes are listed.

A second Kimba anime series was created in 1966.  This was called New Jungle Emperor: Go Ahead Leo!

Tezuka Productions (founded by Osamu Tezuka in 1968) created The New Adventures of Kimba The White Lion in 1989.   This was not a continuation of the old story, but a remake.  The story goes back to the start of Kimba’s adventures.

An Original Video Animation film, Kimba the White Lion: Symphonic Poem, was created in 1991. The OVA uses music to tell the story of Kimba’s early life.

It contains no dialogue, beyond the spoken introduction.

A new anime film, Jungle Emperor Leo, came out in 1997.  The new film takes place after Leo the Lion/ Kimba has grown up and has kids.

In the film, Ham Egg, the hunter from the original series, has discovered the Moonlight Stone.  It seems that the mineral can be used to save the world from an energy crisis.

Ham Egg joins a group of scientists and explorers in the jungle. The hunter’s jungle-destroying tendencies are shocking to the other explorers.

Of course, Ham Egg and the rest of the jungle exploration team soon come across the white lion pride.  The younger lions come into contact with civilization and are curious about it. There is also a deadly disease killing animals in the jungle.

The story has a bittersweet ending.

In September 2009, the anime television film Jungle Taitei – Yuki ga Mirai wo Kaeru was broadcast. The name can be translated as Jungle Emperor: The Brave Can Change the Future.

The film takes place in an artificial “neo-jungle” on Earth, sometime in the future (the year 20XX).  The neo-jungle is an animal preserve.

The story is different from previous versions. Lions Panja and Eliza have a son, Leo.  Leo meets Kenichi, the human son of the CEO of the company that created the preserve. Kenichi can understand animals.

When disease strikes, Leo and Kenichi try to save the animals.

An English-language dub of the film was distributed by The Japan Foundation in 2019.