What is Demon Slayer: Kimetsu no Yaiba 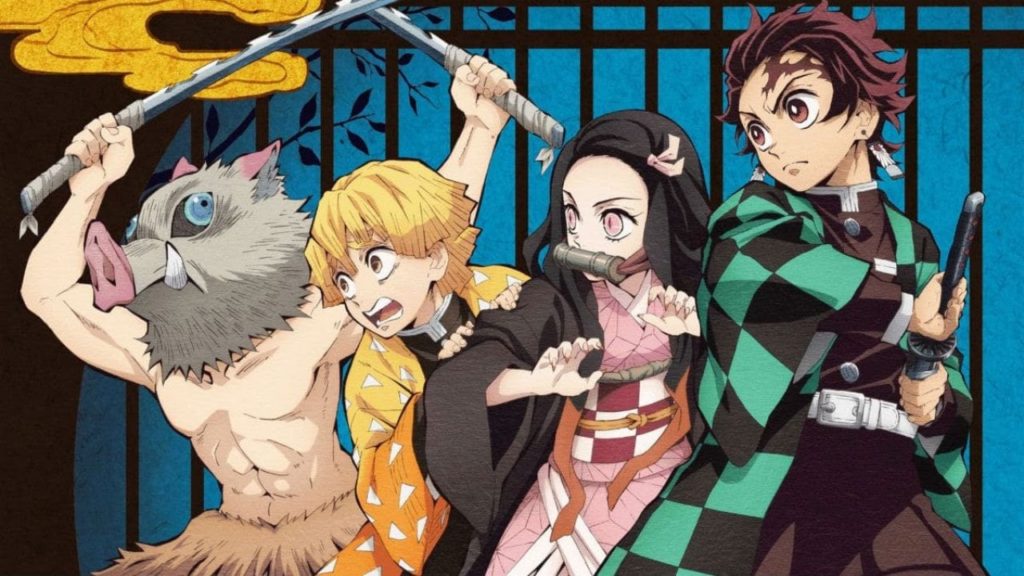 Demon Slayer (鬼滅の刃 – Kimetsu no Yaiba) is a Japanese manga and anime tv series set in the Taisho-era Japan. It is written by Koyoharu Gotouge and published by Shueisha in their Weekly Shonen Jump magazine as well as 19 tankobon individual books.

It got its start in February of 2016 and is still running to this day. The story is about a young boy by the name of Tanjiro Kamado who himself becomes a demon slayer once his family is slaughtered by his younger sister Nezuko after she was turned into a demon.

The manga had such immense popularity that Ufotable picked it up to do an anime adaption of the series which launched in April of 2019 with its first season running through September of 2019.

A sequel was announced as a full-featured movie which is slated to release sometime in 2020. The series has been such a hit that it is on track to be one of the best selling manga series of all time with over 40 million copies being sold as of February 2020.

The Production of Demon Slayer

The creator of Demon Slayer, Koyoharu Gotouge made his Jump debut in the 70th Jump Treasure Newcomer Manga Awards with Ka Gari Gari. After this, he made three one-off series titled “Monju Shirou Kyoudai” which was published in the 2nd issue of Jump Next! In 2014.

He followed up this with Rokkotsu-san in the 39th issue of the Weekly Shounen Jump in 2014 as well, and lastly Haeniwa no Zigzag in the 21st issue of the Weekly Shounen Jump in 2015. Due to Zigzag not becoming a weekly manga in the Jump world, his editor Tatsuhiko Katayama suggested that Gotouge make a series that has a theme that is easier to understand by the general public.

This caused Gotouge to start work on Kisetsu no Nagare which had the themes of demons and swords which is easy for the typical Japanese reader to understand as it’s a theme that is commonly used in manga. However, due to the dark and serious nature, it was not granted a serialization in the Weekly Jump series.

This prompted Katayama to further ask Gotouge if he could write a story that would have a brighter and more centralized character who could be injected into the world which he created with Ka Gari Gari as the base.

Initially, the name of Demon Slayer was going to be Kisatsu no Yaiba (鬼殺の刃) but he felt that the character 殺 (Satsu) which literally means “kill”, was too direct for the Japanese public. This prompted Gotouge to choose 鬼滅 as it was easy to understand even though it has no real meaning.

After some trial and error, Koyoharu Gotouge was granted a weekly publication for Demon Slayer starting with the 11th issue of the Shounen Jump magazine in February of 2016. The series was written and illustrated by Gotouge directly.

Since its release in 2016 the manga has garnered a success that only a few mangas achieve. It’s been so popular that Shueisha began publishing the series in English simultaneously on it’s Manga Plus service in January of 2019.

The manga reached a level of popularity in Japan that American publisher Viz Media purchased the license for the series and has been publishing it in the United States. Viz Media also made the first three chapters of the series in its Weekly Shonen Jump iteration as part of its “Jump Start” program.

There was still a bit of time for the anime to hit the airwaves in Japan as the anime did not make its debut until almost a year later in April of 2019 on Tokyo MX, GTV, GYT, and BS11, as well as a number of other channels.

The anime adaptation of Demon Slayer was directed by Haruo Sotozaki. He has lent his talent to the likes of Fate/stay night, Gintama, Lupin the Third, Gundam Wing, and the Tales of series.

Before the series started airing on syndicated television, the first five episodes were premiered in Japan for two weeks in movie theatres across the nation under the title Kimetsu no Yaiba: Kyoudai no Kizuna (鬼滅の刃兄弟の絆）which translates to Demon Slayer – The Bond Between Siblings.

This five-episode premier also got the same treatment in the United States with Aniplex of America screening the episodes at the Aratani Theatre in Los Angeles on March 31st of 2019 and in Australia by Madman Entertainment at a number of theatres across the country on April 2nd, 2019.

Shortly after the movie theatre premiers around the world, it was announced that the English version of Demon Slayer would be airing on Adult Swim’s Toonami lineup. The series started airing on that block at 1:30 am on October 13th, 2019.

After the first season wrapped up, it was immediately announced that a direct sequel would be released in 2020 in the form of a feature-length film titled Kimetsu no Yaiba The Movie: Mugen Train. All of the staff and cast were announced to be retaining their roles and would be an anime adaption of the Infinite Train arc from the manga series.

The Characters of Demon Slayer – Kimetsu no Yaiba

Demon Slayer is a host to a cast of eclectic characters that span a number of backgrounds and history. With the series being set in Taisho-era Japan, many of the characters follow Japanese folklore and can sometimes be difficult for a western audience to fully understand their backgrounds. Let’s take a look at the main protagonists in Demon Slayer – Kimetsu no Yaiba.

Tanjiro Kamado – Tanjiro is the main protagonist of the story who is the eldest son of a charcoal-seller. Tanjiro’s entire family was slaughtered by Muzan Kibutsuji while he was out, selling charcoal.

Only his sister Nezuko survived the massacre. His sister, however, was turned into a demon and his only goal is to find a cure to turn her back into a human. This causes Tanjiro to join the Demon Slayer Corps.

Nezuko Kamado – Nezuko is Tanjiro’s younger sister. She was with her family when they were slaughtered by Muzan Kibutsuji due to their family’s heritage being tied to the Breath of the Sun Technique.

Even though Muzan killed the entire family, Nezuko survived as a demon although most of her mind is lost. She however retained enough of her memory to prevent herself from killing Tanjiro.

Zenitsu Agatsuma – Zenitsu is a passive boy who was forced to join the Demon Slayer Corps almost at the same time as Tanjiro as a method to repay his debts. He trained in the Thunder Breathing style by Thunder Hashira, even though he was only able to learn the first technique. It’s because of this that he often looks down on himself in battle.

Genya Shinzugawa – Genya is also a demon slayer who joined the corps around the same time as Tanjiro and Zenitsu. He is a brash character who is obsessed with demon-killing and nothing else.

He is unable to use Breaths or many sword fighting skills unlike other demon slayers, instead, he relies on eating parts of the demons that he slays and through this, he is temporarily granted demonic powers.

The strength of this power can change depending on the amount of the demon that he eats. As a downside to this though, he also inherits the weaknesses of the demons that he consumes.

Inosuke Hashibira – Inosuke is a young boy who was raised by a wild boar. He uses a technique called Beast Breathing which he taught to himself along with a set of two swords when he fights.

He seems like a lackluster character, but he proves himself in battle time and time again. When he first meets Tanjiro, he sees him as an enemy, but this quickly changes once they fight together. Inosuke also has an enhanced sense of touch which he can use to detect enemies at large distances.

Kanao Tsuyuri – Kanao is another demon slayer who joins the Demon Slayer Corps around the same time as Tanjiro, Zenitsu, and Genya. She is the disciple of Shinobu Kochou and is being trained as a successor to Hashira.

She uses the Breath of Flower Breathing and excels in fighting. But she is a character who rarely acts on her own will, requiring her to be told what to do frequently in battle. The reason she is like this is the fact that she was raised in a harsh household and was even sold to be a slave.

Where there are a number of other characters in the Demon Slayer universe, this is the set of characters that our protagonist spends the majority of their time with and really in my mind what sets the tone and the premise of the series.

The Wrap Up – Is Demon Slayer – Kimetsu no Yaiba Worth the Time Invested?

With the series spanning a massive 26 episodes, it definitely is no short order to be able to invest the time to watch, but with its compelling story and even more interesting characters, I would strongly recommend that any person, not even anime fans, take the time to watch the series. It’s available to watch on Netflix as well as Crunchyroll.

Not to mention, that there are a couple of games coming out for the series in the near future as well. One for the PlayStation 4 as well as a mobile game for iOS and Android. After watching the series, you’ll easily understand why Demon Slayer is praised as one of the best series to have ever existed.