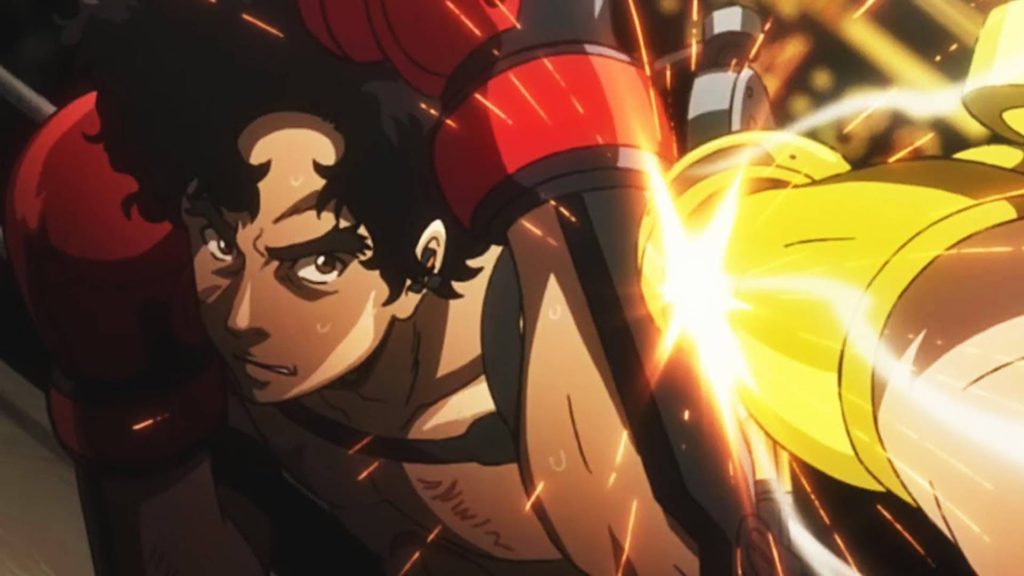 With Megalo Box’s April 5 start date drawing ever closer, topped with Crunchyroll’s recent announcement that they will simulcast the Ashita no Joe 50th anniversary celebration project, it seems appropriate to address the question – what even is Megalo Box?

First, we should go straight to the horse’s mouth and check out the official synopsis:

Set in the future, where the world of boxing has collided with advanced technology to create a new sport, ‘Megalo Box’, in which fighters utilize futuristic exoskeletons to boost their power in the ring. Our hero, Junk Dog, a brilliant fighter but lacking in direction – that is until he meets the reigning champion of the Megalo Box world, Yuri. Their meeting will push the two men into battle, as well as further towards their destiny.

I’m a sucker for anything cyberpunk, so I was immediately drawn in even without any prior knowledge about the show’s ties to Ashita no Joe. Looking further, into the staff working on the project, and things become even more exciting. Moriyama You, who worked previously on supervising the art design on such visually fantastic shows as Attack on Titan and Kabaneri of the Iron Fortress, spent four years creating Megalo Box as director. That’s a large chunk of time to take out of a professional’s busy schedule, which makes me think that Moriyama really took special care in crafting the show. The soundtrack is also being provided by Mabanua, whose fantastic work on Kids on the Slope both helped reinforce the musical identity of the 2012 series, as well as live up to director Shinichiro Watanabe’s high standards.

The series clearly has close ties with the legendary 1968 boxing manga Ashita no Joe, which is obvious when you look at the previews released so far. Yuri and Junk Dog’s rivalry is clearly aiming to emulate the rivalry between Joe Yabuki and Rikishi Toru, not just in terms of their position as underdog and champion, but also in terms of the fateful nature of the encounter. I have no doubt that their meeting will drastically change the course of both character’s lives,  as well as the course of the world around them, just as Joe and Rikishi’s meeting did. Joe’s coach Danpe Tange and neglected love interest Shiraki Youko have also found form once more in the character designs of Nambe Gansaku and Shirato Yukiko respectively, but whether or not these characters will be different from their apparent inspirations remains to be seen. The setting also very much resembles the setting of Joe, being a run-down and neglected slum. Even though both stories are set in different eras, in spirit both Junk Dog’s town and Joe’s Doya-machi seem the same in spirit – neglected and downtrodden. I have no doubt that the series will play off of these elements too, just like Joe did.

That being said, the series’ close ties with Joe does seem to be putting people off. Many people have been worried that they have to have seen or read Joe in order to watch the series, and I’m here today to put those people’s worries to rest.

Although a lot of the framing and themes are the same as Joe, Megalo Box is very much a different beast. Boxing, arguably the central element of Joe, isn’t even mentioned in any of the information regarding the show – from this, it’s clear that ‘Megalo Box’ as a sport will function very differently from the boxing in Joe. The cyberpunk setting is also heavily emphasized and considering that much of Joe’s own narrative weight comes from it’s post-war Japan setting, I have no doubt in turn that the cyberpunk setting will too have its own particular weight.

Obviously, if you have read or watched Joe, then you’ll understand more of the references that the series will no doubt contain, but at the same time I think it’s very much trying to be its own thing. After all, if it really was closely related to Joe, then wouldn’t they put the name of that iconic franchise in the title of the show? It is often advertised as part of the Ashita no Joe 50th anniversary project, but this usually only makes up a small part of the advertisement, above the title or at the beginning of a PV.

Plus, it’s clearly distinct enough to confuse people as to what it actually is. It’d be easier to understand if it was just a Joe sequel, after all. But, it’s clear that the series is trying less to be a straightforward Joe sequel than it is trying to recapture that burning-hot flame that Joe Yabuki showed us all those years ago. Sure, it pays reverence to Joe in its similar aspects, but at the same time, surely the best way to honor the series’ memory is to show us another masterpiece just like it? And I, for one, certainly hope that they do.