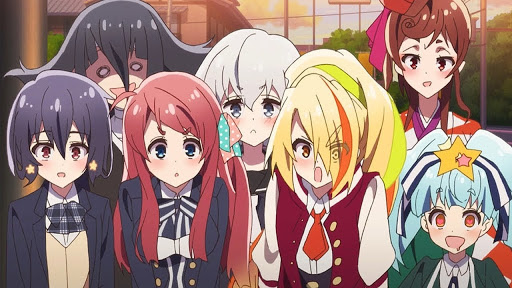 What Makes Zombieland Saga One of the Best Idol Anime?

If you haven’t heard of Zombieland Saga, or need a refresher, here’s a quick rundown of the show that talks about the characters, the development, and the real-life impact that show has had on Saga. We’ve also followed up with the show’s popularity through its collaboration cafe and concert.

Zombieland Saga is not a traditional idol anime; it revolves around zombies. The show begins with the untimely death of Sakura. Some 10 years later, Sakura and six other girls, Saki, Lily, Junko, Tae, Ai, and Yugiri, were revived by the mysterious Kotaro Tatsumi in order to revitalize the Saga prefecture by forming the idol group Franchouchou. The question is: How long can these zombie idols keep their secret under wraps?

As an idol anime, it’s no surprise that the girls will fit into some sort of troupe. However, because the show focuses on zombie idols, the show can bring in characters that haven’t been really seen in idol shows. Zombieland Saga takes advantage of this and has the Franchouchou members come from different points in time to create a group that wouldn’t exist in this modern era.

One of the characters, Yugiri, was born in 1863, near the end of the Edo period and was a courtesan. She is the eldest member of the group, and her mannerisms and talent on the shamisen give her this regal air despite her background as a courtesan. She is the odd zombie out because the other characters are more modern as they lived and died in between the 1960s and the 2010s.

However, this also creates an interesting strain between the girls as some of them remember the older members from when they were alive and even heard about their deaths and know what happened in the aftermath of their deaths. On top of that, the older girls react a lot differently than the younger members due to generational differences, but they adjust well to the newer trends. Then there’s the enigmatic Tae who we really know nothing about besides her being the group’s actual zombie.

Of course, we can’t forget about the man responsible for waking these girls up, Kotaro. Kotaro’s relationship to the girls is one of manager to idol, and he does care about these girls and often encourages them to move forward. However, he can also be selfish and often puts the girls in awkward situations. 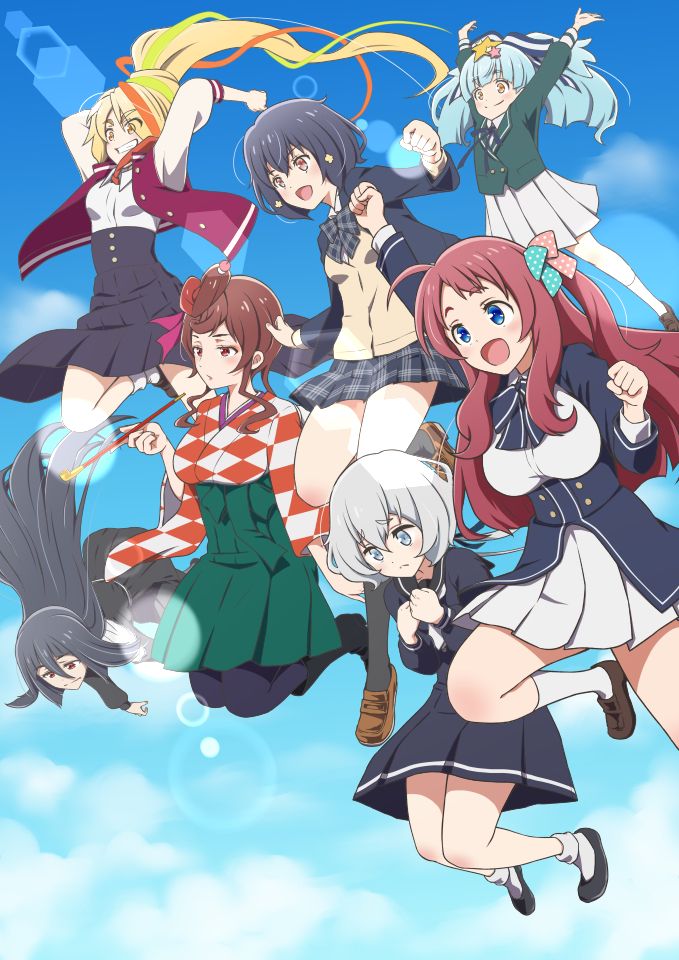 As an idol show, the girls do have to play up the idol aspect and be cute girls. However, the show takes advantage of the undead state of the Franchouchou members, which often leads to some funny situations.

As zombies, the girls are prone to losing limbs. This usually happens to Tae as she is the only member of the group who has not regained her memories, so she acts like a typical zombie and is often seen biting something or doing something weird in the background.

This leads to the amusement of other members, and in one episode, Lily and Saki are seen playing with Tae’s limbs on stage like it’s no big deal. Tae’s head even flies off into the audience, and while Sakura is the only member to panic, the elderly audience doesn’t really notice.

In another episode, Tae falls apart shooting for a commercial and the girls scramble to put her back together before anyone notices. However, Tae isn’t the only member this happens to. In many cases, the girls have had stage malfunctions where they sometimes do lose their heads mid-performance.

This makes them think fast and they work to make sure that no one notices a member lost a limb, or their head midway through a performance. There is also an episode where the members continuously slap Sakura that her head literally spins.

There is also a gag where Lily’s heart beats out of her chest when she’s nervous. This is a gag referencing her death from a heart attack. It’s just another comedic gem that can be logically used in this way because of the show’s nature.

In another episode, Yuugiri makes a very valid point when she asks if they smell due to the fact that their bodies are decomposing. This leads to awkward laughter from the group which then leads to them rushing to bathe. While they are guaranteed that they really don’t smell so bad, the thought lingers.

The show also plays with age as Yugiri and Junko died before the computer was invented and don’t know how to interact with it. In another instance, Saki is shown to be very crass with her language, mostly due to her background as a biker, which leads Junko to blush. There is also Yugiri’s response to slap sense into people as that was the norm for her.

Kotaro himself is just so dramatic. In just about every scene, he’s screaming and performing over-the-top theatrics that are drenched in dramatic flair. Normally, this would be annoying, but in the Japanese version, he’s voiced by the legend himself, Mamoru Miyano which makes Kotaro such a beloved character. In the English version, he’s voiced by Ricco Fajardo who perfectly embodies the character’s over-the-top antics and makes the character so much more lovable and comedic.

It also doesn’t help that Kotaro is also seen in costumes for no real reason. In one episode he’s seen in a shower cap and shamisen, in another he’s in a beret holding a baguette, in another he’s wearing an alpine hat. Why? Well, why not.

The comedy also goes beyond the contents in the show. The show’s official Twitter account also makes references to iconic memes. In this case, the show references the iconic Fist of the North Star line, “omae wa mou shindeiru” which adds an extra layer of comedy to the show.

This iconic rap scene from episode 2 flooded social media and became the talk of the internet because of how savage it was. The rap came about as Sakura was fed up with everyone in the group, especially Saki and proceeded to vent her frustrations out through an impromptu rap battle with Kotaro beatboxing and Yuugiri playing her shamisen and ad-libbing.

While Sakura ended up dissing members Saki, Ai, and Junko, she also went as far as to diss the elderly audience. However, some viewers, myself included, also ended up being dissed by Saki’s line “…your Tamagotchi’s long dead”. Seriously, that line still hurts.

As a show from Studio Mappa, a studio famous for its loving representation of LGBTQIA+ characters, it’s no surprise that they’d add in a trans character to a show at some point. Lily was first introduced as the youngest member of Franchouchou and everyone took a shine to her. In episode 8, it was revealed that Lily is a trans girl who died of shock after she found that she was starting to grow facial hair.

While Ai had some concerns regarding what that meant for their girl group, Lily was quick to reiterate that she’s a girl and will always be a girl. This was also echoed by Kotaro who was quick to berate the girls for thinking of Lily as different from before just because she was born a boy and said “if you have time to ask stupid questions, you morons should go to bed” before kicking them out of his room.

This was followed with the members of the group understanding that they’re all zombies which means they’ll never change and echoing Kotaro’s sentiments in mentioning that Lily is Lily and that, too, will never change.

This was met with a giant celebration from many of the fans of the show, but it was also met with hate from some others. It got to the point where Zombieland Saga’s official twitter had to address the critics by posting tweets saying to respect and love Lily as well as to remember what the biker chick said to silence the haters. 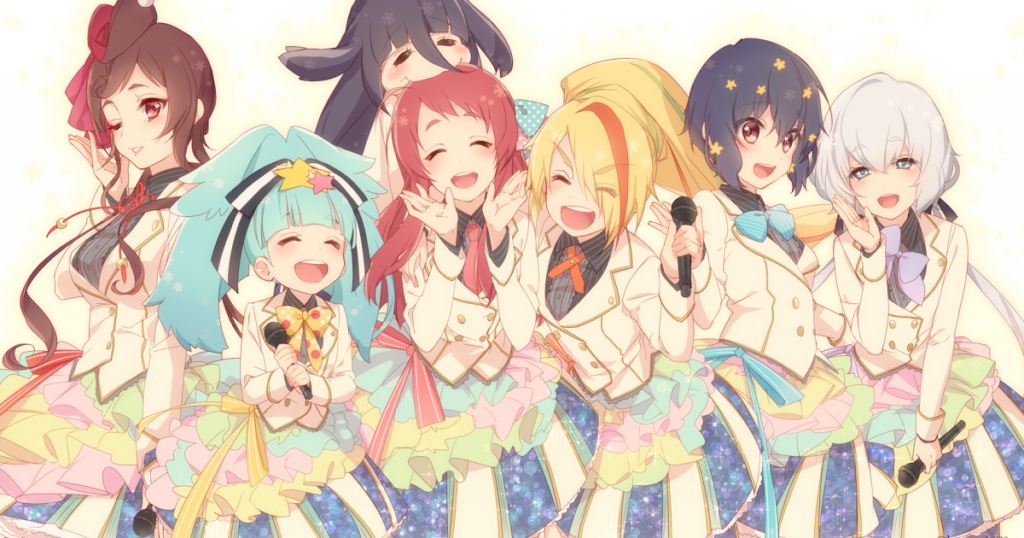 The Set-Up For Season 2

At the end of the first season, fans were expecting the show to take a normal idol anime turn by having the girls work towards the next big performance.

While it most likely will go in that direction, the show decided to add another layer to the narrative by revealing that Kotaro knew Sakura when she was alive which explains why he always picks on her and wears sunglasses to hide his face from her. The fact that he studied necromancy, revived Sakura and the other girls just to make sure Sakura got to live out her dream of being an idol is so precious, but also heartbreaking.

We’re excited to see where MAPPA is going to take this plotline for the next season as well as the shenanigans Franchouchou is going to get themselves into.

While there’s no definitive date for season 2, that doesn’t mean you can’t enjoy season 1. Zombieland Saga is currently available on Crunchyroll in Japanese. If you’re interested in hearing the English dub, head on over to Funimation.