Latest Digimon Adventure Movie Trailer Has Us Asking ‘What Was It About Digimon’? 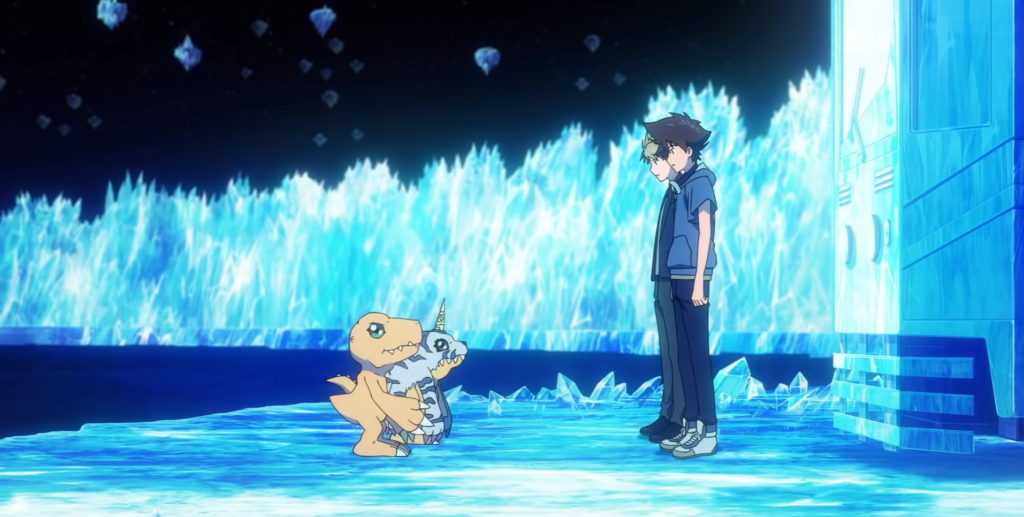 Usually I’m a little more cynical when it comes to the endless regurgitation of rehashes and remakes in media. Whether we’re talking about the Hollywood movie landscape where these films comprise nearly all big releases now or even our smaller worlds of anime and games which, while new stories still get made, has also been infected with the remake disease. Not to say that every new edition of old property is bad; For instance, Spider-Man: Into The Spider-Verse kicked ass and Dragon Ball Super more or less lives up to its namesake’s legacy. With less original anime coming out every season though, I worry. However, even I have my weaknesses One big ongoing ‘rehash’ I absolutely welcome and champion has been the resurrection of the original Digimon Adventure with the 2010s Digimon Adventure Tri series and next year’s Digimon Adventure: Last Evolution Kizuna film.

The latest trailer for Digimon Adventure: Last Evolution Kizuna cuts me right to my core with the phrase ‘This Is Tai and Agumon’s last Adventure’ and the sparse rendition of the classic Butter-Fly by the late Koji Wada. Objectively, I know Toei Animation could very well continue making Digimon Adventure after this and that of course they’re going to use Butter-Fly, it being a song everyone under the age of 40 in Japan knows. Much like many of you are fell prey to Rise Of The Skywalker reigniting old Star Wars feelings, I’m doing that but with digital monsters. Even after Tri, I desperately want to see my digi-destined and my monster friends one last time. One last adventure would soothe my soul. A cynic normally, two decisive factors have tricked me into buying into this ‘rehash’ more than I ever would have; Why the original show was so important and how Toei and the various producers have handled bringing it back to life.

Of course, when Digimon Adventure first came out 20 years ago, people constantly labeled the anime a bootleg Pokémon. On some level that’s to be expected because, to the toy companies and producers, it was created to compete or at least siphon some of that endless Poké cash. Here’s the thing though; While Pokémon is undoubtedly the stronger franchise with its better games, catchier hook (get it), and the Nintendo money behind it, when speaking strictly about the shows Digimon was way stronger than Pokémon. I don’t know why the creatives who were tasked by the powers to make a show to sell kids toys and games decided to put their hearts into creating something great but they succeeded. For my money Digimon, the first three seasons at least is the great ‘kids’ anime ever made. 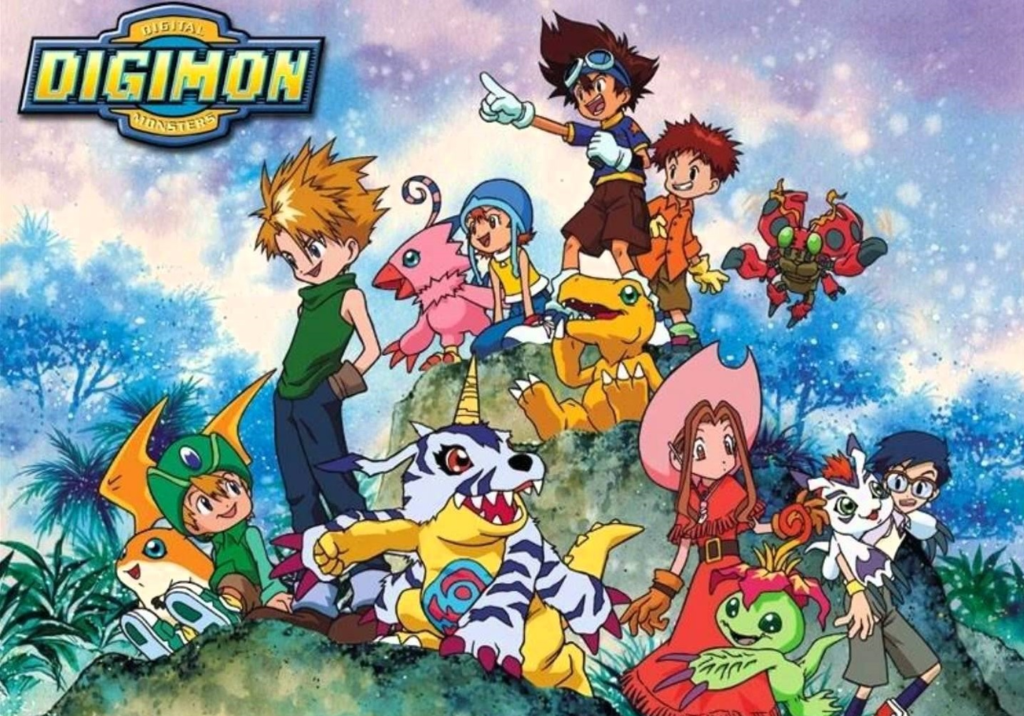 While friendship and cooperation are common themes found in kids shows, Digimon Adventure really pounds them into you with its set up. Seven elementary-aged children who only kind of know each other are transported to a mysterious other world and immediately get attacked by a giant monster. Turns out though they each meet a smaller friendly monster who in time will become their best friends as they all work to simultaneously get home and save the digital world. You watch as these kids learn to work with each other and with their digital friends, slowly opening up along the way about their real lives, their fears, and their hopes. While the viewer doesn’t get their own monster pal, unless they buy one in toy form of course, with the show’s more three-dimensional approach to character writing they get attached to humans and monsters alike as they navigate this fascinating but scary unknown world. When you’re watching it, you’re a Digi-Destined too.

Sure Pokémon the series had friends working with monsters and journeying from town to town each week, but there were never any stakes. Maybe Ash would lose a match or Team Rocket would attack but at the end of every episode, you were brought back to the status quo. All the towns were safe and nothing truly bad ever happens. Digimon, on the other hand, respected its younger audience enough to put them through trials and tribulations. Characters fight, characters feel scared and get depressed, sometimes characters even die. You have Digimon enslavement, youngins under attack, and all sorts of psychological matters at the forefront of the show. In that sense, this kid’s anime was touching on some very real ideas and problems underneath its ‘buy our toys and trading cards’ face. The cast’s adversities and struggles were genuine and their triumphs were something you really feel proud of them for. It makes them tangible. Whether first meeting Tai, Agumon, and the rest as a kid or only watched their shows as an adult, they’ll stick in your hearts forever.

Digimon Adventure originally consisted of Adventure and Adventure 02. After that, Toei made other seasons after but each would be its own self-contained show in its own self-contained world. Tamers, written by the madman behind  Serial Experiments Lain and The Big O  Chiaki J. Konaka, was every bit as good as Adventure but Frontier, Fusion, Savers? We could take or leave them. Regardless of whether these other entities were good or no, when people hear Digimon they think of Tai and Agumon. In the mid-2010s Toei Animation decided to resurrect a number of old classics. As we said, Dragon Ball Super along with the previous new Dragon Ball Z movies turned out to be a great success. Sailor Moon Crystal, on the other hand, had some problems, but even that sub-franchise is getting a new movie too next year. When it came time to dusting off Digimon, Toei could have either gone the Dragon Ball Super sequel route or the Sailor Moon Crystal remake path. Thankfully they did the former and in a really neat way. 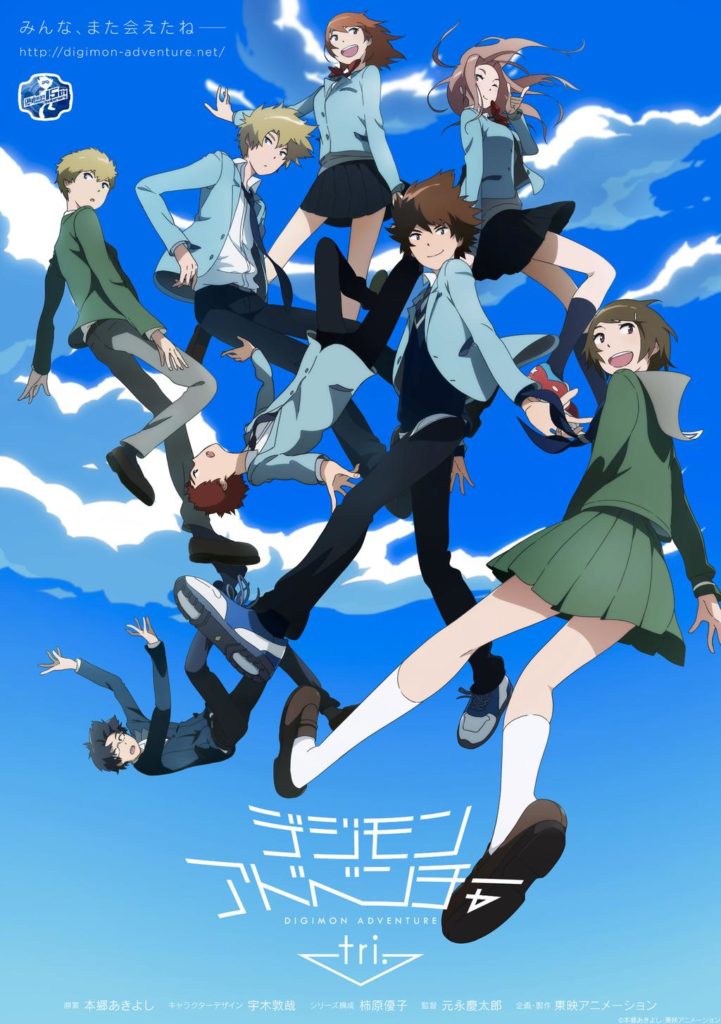 Digimon Adventure Tri was genius for one specific reason. Toei didn’t just create another season of Adventure that took place after Adventure 02. The show-runners aged up the cast to the point where they were high school students and allowed them to actually act like they were older. Of course, there are all sorts of new threats and bigger, cooler Digimon for you to buy toys of, but in aging they characters they were able to give fans of the older series a show that grew up with them. They didn’t’ shy away from romance, from friendship ending disagreements, and more subtle kinds of mental fatigue that can affect a person. It was a little silly and certainly melodramatic at times but that worked in favor of making Tri its own distinct entity in the canon. In a sense, Tri was like the fanfiction people wrote because they always wanted to see what would happen to the digi-destined later in life. Unlike fanfiction though, the show came off as authentically Digimon for older audiences.

This new movie ages up the characters even more. Everyone’s in their early 20s now and have to contend with what it means to finally become adults. The trailer implies they’ll finally have to severe their connection with their Digimon once and for all. Unlike Tri, even the cast from Digimon Adventure 02 will be part of this supposedly ’emotional finale’. If Digimon Adventure: Last Evolution Kizuna really is ‘Tai and Agumon’s Last Adventure’ and the producers continue to take narrative risks like they’ve constantly done throughout the entire Adventure franchise, this movie could be something truly poignant at least for those of us who’ve ‘walked with Digimon’ all this time. While I’m definitely not expecting some End Of Evangelion or Madoka Rebellion type subversion of the series, I’m confident it will have some surprises in store for us. 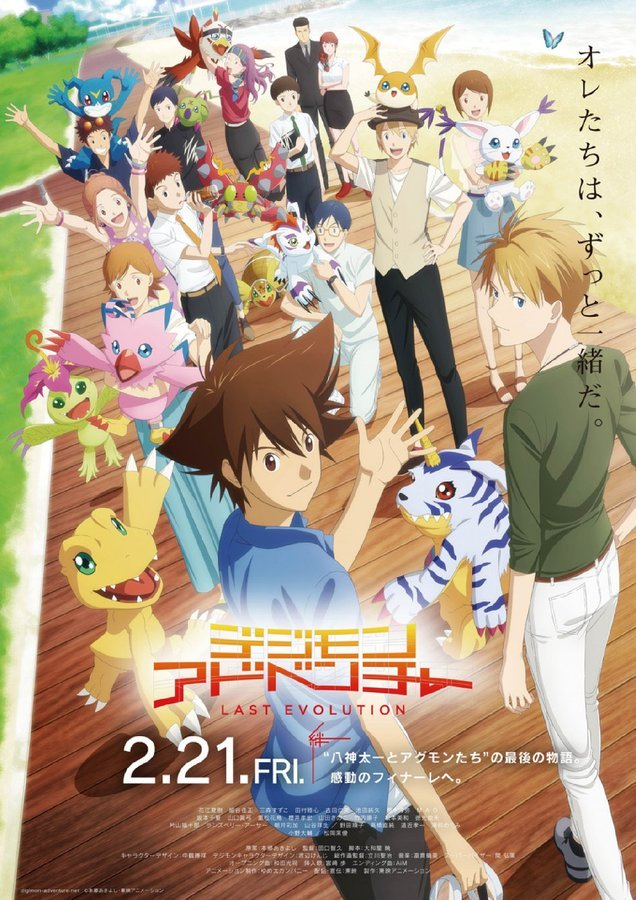 If I haven’t made it clear already, not only do I really love Digimon, I think extremely highly of it. I can’t think of another anime aimed at younger audiences that respects them enough to show that life isn’t always alright even while providing them with a spectacular and thrilling adventure. Even Digimon Adventure 02, despite getting a lot of flack for not being the original, goes to some dark places by the end of its run. I applaud the creators of these shows for giving fans new entries the age up the characters to both make them more relatable to us, as opposed to younger kids, as well as to just let fans see how they’re doing after all these years. Digimon is something special and if you’ve never taken the plunge, or maybe you have young kids and want to get them set on their anime path early on, consider jumping for. For those of us that have, get excited for what’s to come; The digi-destined have saved the world again and again, they haven’t let us down yet.

other Chris Cimi 4 months ago