Here There Be Humans: What’s the Deal With Mermaid Saga? 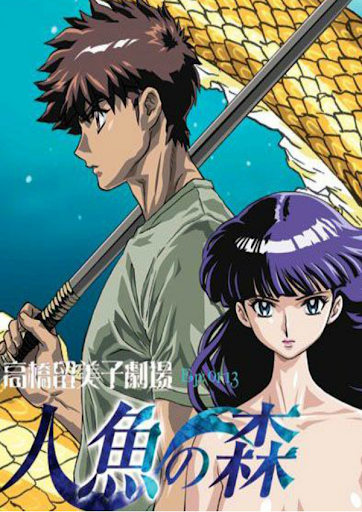 So… monster girls are still a thing, right?

We’ve got your demons, dragon maids, neko girls, and a handful of less ‘moe’ monsters as well. You think it, it probably exists on the internet.

I, for one, think these archetypes of truly monstrous girls are great as a concept. I know they’ve been ‘waifu-ed’ over the years, but bringing them into the mainstream ain’t bad for showbiz.

However, it’s interesting to look back on the many myths and tales from which monster girls originated as they tend to be less than pretty and pretty out there.

The mermaid is such a creature for the world of anime and manga.

So, what’s the deal with mermaids you may ask…

To Disney’s credit, their adaptation (1989) of the beloved and bittersweet Hans Christian Andersen fairytale The Little Mermaid (1937) is likely the first version to come to mind.

Needless to say, it’s a happier take on the original story with surface-level worldbuilding.

Don’t get me wrong, it’s a cute, fun, and visually appealing film as is Studio Ghibli’s The Little Mermaid-inspired Ponyo (2008). The same goes for the musical shoujo Mermaid Melody Pichi Pichi Pitch (2003-2004) and shounen My Bride Is A Mermaid (2007), the latter of which I enjoyed quite a bit for its comedic take on mermaid powers.

The horror anime/manga Mermaid Saga, on the other hand, explores mermaids (known as ‘ningyo,’ a type of demon or yokai, in Japan) as they’re often depicted in both Greek and Japanese lore. 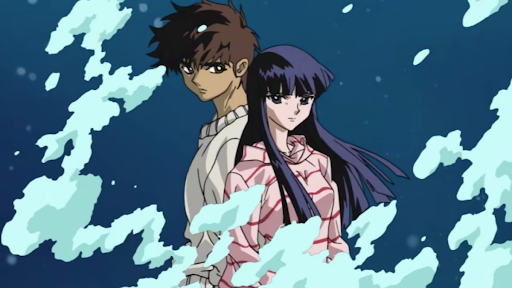 What Is Mermaid Saga?

The eleven-episode anime series that followed was produced by TMS Entertainment in 2003. The two arcs made up of Episodes 4-5 and Episodes 12-13 reimagine the OVAs’ plotlines as their shared titles imply. This format of arcs goes for most of the show.

Mermaid Saga is a relatively short series, but packs a lot of disturbing content and good ole’ hubris into its nine individual stories and eleven episodes.

Our story begins with a girl named Mana being prepared for a sacrifice by her village of mermaids in disguise. Prior to Mana’s transformation into a mermaid, she is saved by a five-hundred-year-old former fisherman, Yuta, who’d obtained his own extended life by means of consuming mermaid flesh as a young man.

The rest of the series follows Yuta and Mana as they encounter other immortal humans, some malicious and some tragic in their pursuit of youthful wants, as they search for a way to undo their curse.

I think the Mermaid Saga anime takes full advantage of its monstrous girls (and guys!) and their resemblance to humans without detracting from the dread of immortality.

It’s terrifying to watch Yuta and Mana come to blows with dangerous strangers and be killed multiple times (only to be brought back to life via the poison in their veins). Those who don’t live through the flesh-eating process as Yuta did either die, lose body parts to graphic deformities, or transform into Lost Souls, hideous creatures more akin to Greek sirens than mermaids.

Overall, the anime makes the manga’s worldbuilding all the more visceral.

Seeing as Yuta and Mana’s journey is episodic in itself, we as viewers get to know them better than the passing villagers they meet every 2-3 episodes through subtle moments.

In fact, Episodes 2-3 are devoted to exploring Yuta’s past as a fisherman and the ‘one that got away.’ Our protagonist is surprisingly sound for an immortal, but does regret not being able to experience life as his deceased wife had. With that in mind, his romance with pirate and second love Rin is cut short due to his misgivings.

On the other hand, Mana is sheltered and wide-eyed, her only link to the outside world being Yuta after years of grooming. Yes, she does start to feel something deeper for her savior, but age gaps in immortal/mortal romances have always been a gray zone, to say the least.

Overall, the show is more about our pair facing the worst of humanity, finding comfort in each other as strangers bound by spilled blood, and growing closer as friends.

The Legacy of Mermaid Saga

Mermaid Saga may not have been a hit upon release, but it was…memorable, unique.

I wouldn’t call it popular in terms of garnering a big fan base or entering the mainstream like monster girl ‘waifus’ and related media do nowadays, but it exists as a testament to the staying power of fairy tales, folklore, and mermaids in general.

I’d even argue this manga was a stepping stone for mangaka Rumiko Takahashi’s later fantasy work Inuyasha (1996-2008). I don’t think it’s a reach to ‘read’ Mana and Rin as having influenced the designs and plotlines for Inuyasha’s Kagome and Kikyo. The two manga also balance historical and supernatural elements in a way that feels organic.

On a side note, should horror RPGs be up your alley, I’d recommend checking out the RPG MAKER game Mermaid Swamp (2013) as it was recently rebooted (2019), offers several meaningful choices, and screams Mermaid Saga while putting its own less supernatural twist on mermaids’ powers.