Why ‘Attack on Titan’ Is the Manga of the Decade 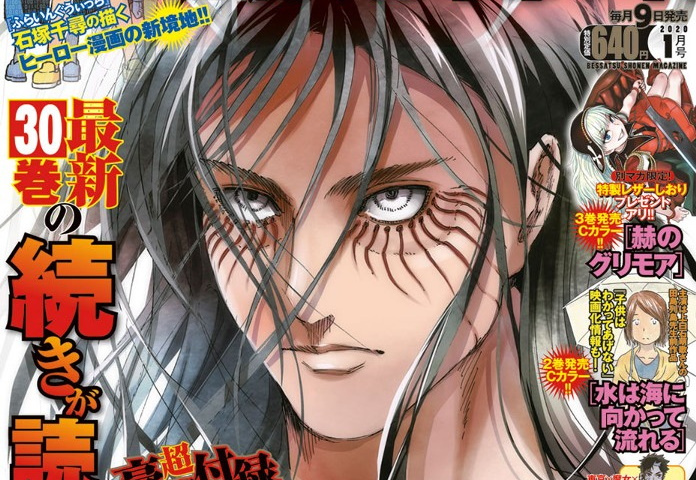 This decade was a transformative one for shonen manga. Not only did the ‘Big Three’ as we know it fade from existence with both Bleach and Naruto coming to an end, but what took their place was wholly unexpected. It represented a paradigm shift not just in the industry itself, but also in popular culture as a whole. What became one of the best-selling manga of the decade and a truly international phenomenon was not another Weekly Shonen Jump or even a Shueisha-owned property, but a little known series from a little known magazine known as Attack on Titan.

Confusing, I know, but the point is that Bessatsu Shonen Magazine wasn’t exactly on the tip of everyone’s tongue at the beginning of the decade. Prior to the explosion in popularity of Attack on Titan, the magazine was essentially unknown to all but a small pool of diehard fans. Hajime Isayama’s series is still by far the magazine’s biggest success (next to The Heroic Legend of Arslan) and its line-up has, in turn, been historically dominated by side stories and spin-offs of said series, such as Attack on Titan: Junior High and Lost Girls. Not exactly made for success. 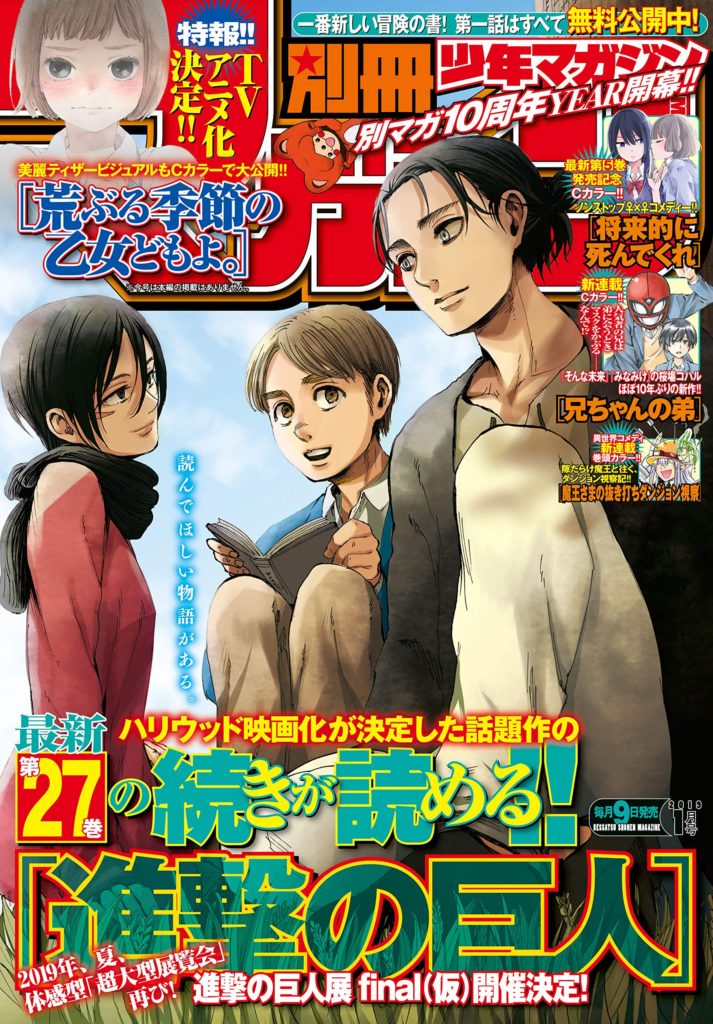 In this sense, if you’d have told any manga industry expert back at the beginning of the previous decade that one of the biggest and most important manga of the 2010s was going to come from Bessatsu, they’d have laughed in your face. That speaks, in at least some sense, to the volatility of popular culture and the manga industry in particular, but this disbelief would’ve been confounded if you were to explain who was going to be pen the series – Hajime Isayama, a complete rookie with less-than-satisfactory art skills who had already been rejected once by Shueisha before pitching the idea for his series to Kodansha.

Even so, he did it. While the going was slow at first, the manga itself not gaining significant traction until 2012 when the newly-formed WIT Studio picked up the series three years after its launch for an anime adaptation, once the ball got rolling, it never stopped.

Never has a series swept the world so fast nor as completely as Attack on Titan did in the early 2010s. During that magical period, you couldn’t go to a convention without being greeted by a mob of teenagers in 3D Maneuver Gear or head online without entering into some kind of debate about shipping or theorycrafting. It was truly a worldwide phenomenon with sales to match – reaching an all-time peak in 2013 with a whopping 15 million sales, only dropping by 4 million the next year.

Attack on Titan manga sales each year since 2011

Of course, part of this was down to good fortune and circumstance. Anime had already come firmly into the cultural zeitgeist during the early 90s thanks to Toonami, Akira, and Sailor Moon, among others. By the early 2010s, anime streaming had also become sophisticated enough in its organization and industry ties to facilitate the then-novel concept of ‘simulcasts,’ primarily through the fledgling Crunchyroll. The proliferation of the internet also allowed many fans who had become enamored with the anime to jump directly into the manga more or less as it was released in Japan, through both legal and illegal means.

All of this was incredibly important to Attack on Titan. No longer was watching anime tantamount to social suicide, and many of the teenagers who engaged with the series were no doubt already familiar with the medium, possibly due to the influence of their parents or an older sibling. Crunchyroll picked up the anime for legal, same-day streaming that beat out the pirates in terms of speed and quality. And the fact that the series was so heavy on mysterious world-building, hidden agendas and identities sated the viewer’s appetite for more, which was readily available in the form of the original manga online.

Why Attack on Titan?

But to pin the entirety of the series’ success entirely on circumstance would be inaccurate. The day cannot be seized without the means to do so, and in this sense the quality of Hajime Isayama’s series, its unique vision and storytelling sensibilities cannot be understated.

One thing that I opted not to mention when discussing the role of circumstance in Attack on Titan’s popularity was how the story’s premise matched up with the abundance of overtly dark post-apocalyptic media in the early 2010s. Those were the days of your mom watching Game of Thrones because it was marketed as ‘fantasy for adults,’ and The Walking Dead TV show not being such a disastrous trainwreck. The way that Hajime Isayama’s series matched these series in both tone and content – the Titans function in much the same role as the zombies from TWD – seems to be a favorite of non-specialist critics when attempting to explain away why the series became so popular so quickly.

As you may have guessed, I’m not entirely convinced by this. While the series’ dark tone and subject matter may have made viewers (especially non-anime fans) predisposed to checking it out, the wanton character death of the opening episodes quickly gives way after the Battle of Trost to a very different story, where our cast more or less stays the same and things slow down just a little bit.

It’s my belief, therefore, that Hajime Isayama’s powerful, patient storytelling is what forms the core appeal of his series. The level of restraint that he has exercised over the years in world-building, character development, and essential exposition – a far cry from many other mangaka out there, who rush to get their best ideas right out of the gate – is what has kept viewers engaged, and was what made the eventual reveal of so many of the narrative’s mysteries in the end of the Return to Shiganshina arc and during the Marley arc so gratifying.

Of course, we mustn’t forget about the series’ characters. It’s hard to underestimate the importance of characters in a narrative, and in Attack on Titan’s case, some key suspects are responsible for how big the series became. Eren, for one, but also Levi the heartthrob, Bertolt the meme, and Mikasa the misunderstood. The fact that people resonated so greatly with some of the characters and dedicated themselves to fanfiction or doujinshi featuring them or a combination thereof was, no doubt, also instrumental in getting some people into the series and sustaining long-term interest.

The End of Attack of Titan

But all good things must come to an end. Attack on Titan is currently in its final, mad death throngs, and will no doubt come to end this year. After Attack on Titan, what next?

It’s hard to imagine that the shocks from the series and absorbed by the popular culture landscape will simply go away once the series as a whole comes to an end. The damage has already been done: not only in dislodging the percieved superiority of Shueisha and Weekly Shonen Jump but also in bringing into the medium a whole legion of new fans, western and Japanese alike. I’m sure that there even a fair few who are reading this that found their feet with Hajime Isayama’s series. 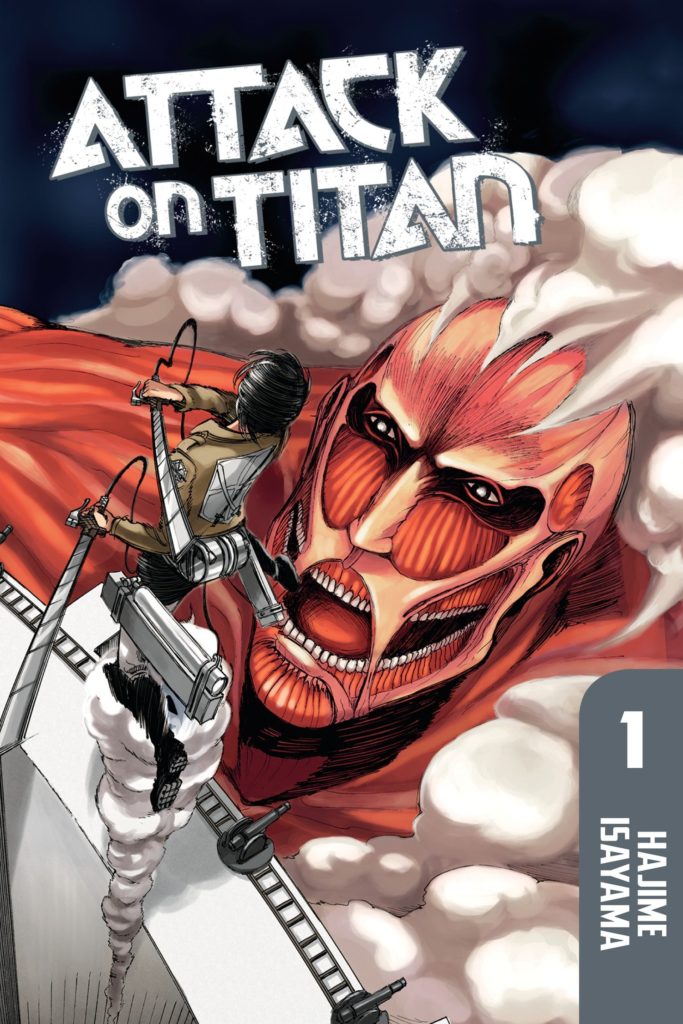 Nevertheless, the series has already passed its popularity peak, and already the new generation has found its new cornerstone. What’s more, is that many of these series come from Weekly Shonen Jump: Kimetsu no Yaiba, for one, but also My Hero Academia, The Promised Neverland, Haikyu!!, to name but a few. For all intents and purposes, it seems like Attack on Titan’s star has faded.

But the series was still one of Japan’s highest-selling manga this year, and the memories formed for those who lived through its heydays are ones that aren’t so easily forgotten. While it doesn’t have quite as much emotional punch as Bakuman, that’s why I, and many others, consider Attack on Titan to be the manga of the decade.