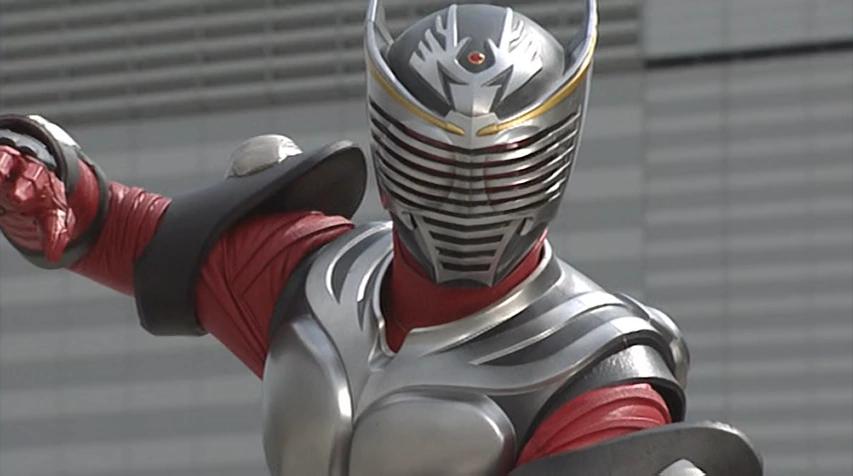 While a ‘kids action show’ isn’t everyone’s idea of a good time, in an age where Marvel movies have been the most popular form of media in the world, nothing with superheroes should be explicitly off-limits. Even before One Punch Man and My Hero Academia, Japan had its own for decades and sometimes they are in fact bug themed. Kamen Rider, the sister franchise to the show that Power Rangers have spent 30 years pilfering footage from, is an acquired taste. Like Super Sentai, it too was originally based on a manga by Shotaro Ishinomori who couldn’t have known not one but two of his series would become Saturday morning kids staples in Japan for years to come. Compared to the Sentai franchise though, Kamen Rider has historically been a touch more serious and character-based, and while it’s all made to sell kids toys, that doesn’t mean there’s nothing worth writing home about. 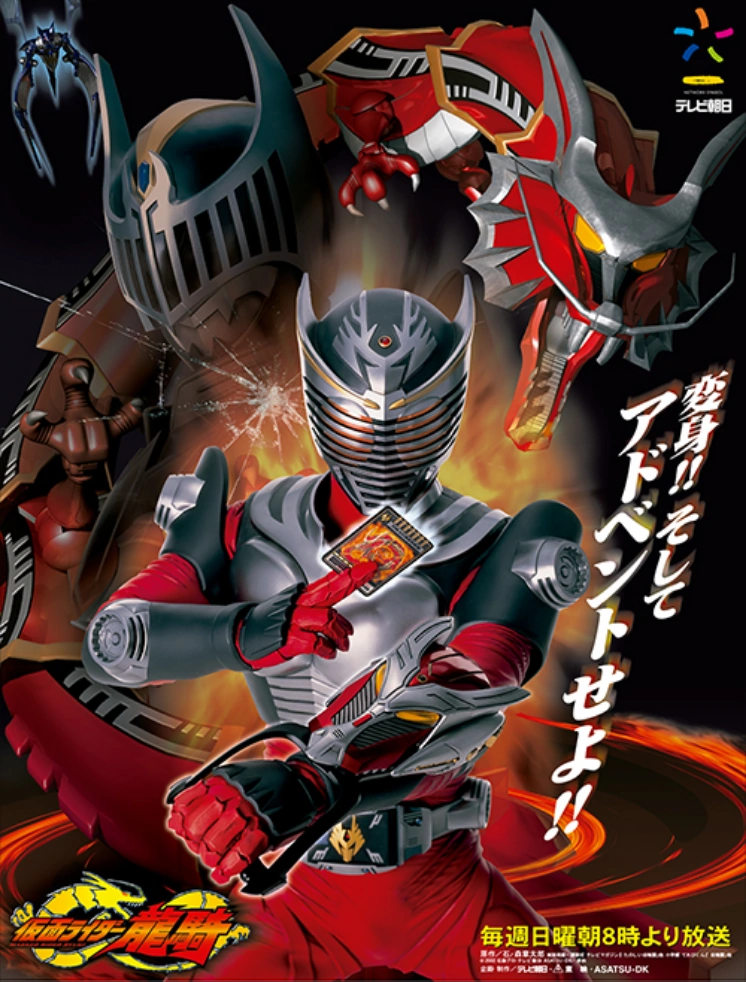 And writing to your homes we shall! 2002’s Kamen Rider Ryuki is something of a special case amongst all the Sentai and Rider shows; It was the first to truly center around pitting a bunch of these ‘heroes’ against each other. I’m sure infighting has happened before in Tokusatsu hero history, but Ryuki deep dives into the idea of humans being forced to fight and kill one another. Normally these kids superhero shows have these zentai suit-clad warriors tackling monsters (who do appear), but here the Rider Fight takes precedence; thirteen riders at the start, last one to survive gets one wish granted. The entire D&D alignment chart is represented amongst the thirteen bug men, with the titular Ryuki’s Shinji Kido being something of a chaotic good. It results in a spectacular amount of moral gray for a show trying to unload trinkets onto your parents, which is only one part of its charm. 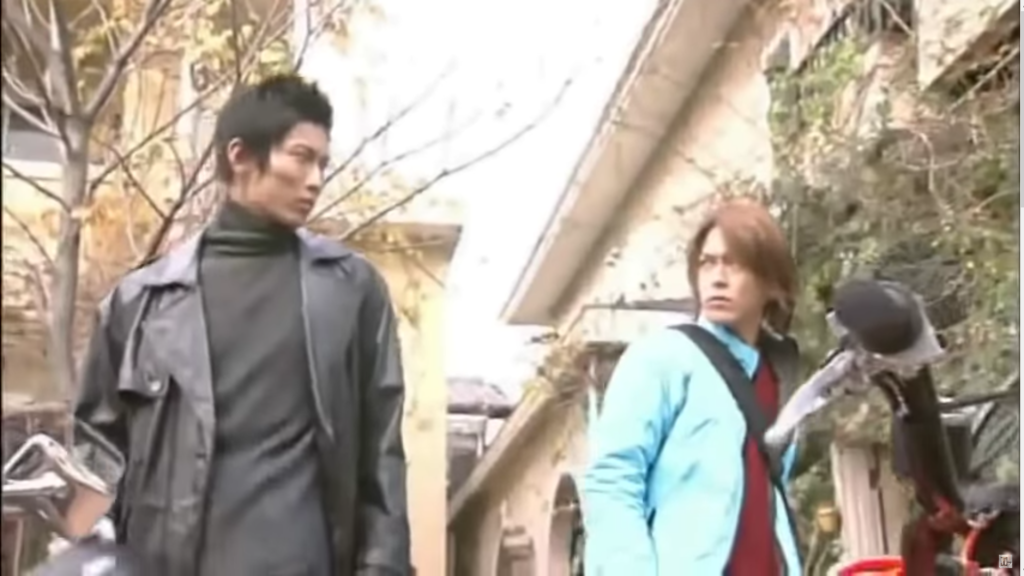 Like your Narutos and your Avengers, it’s the people behind the masks who turn the show’s fans into lifelong diehards. Speaking of the former, a very ‘Naruto and Sasuke’ type relationship makes up the crux of Kamen Rider Ryuki’s emotional backbone in the form of Shinji Kido and Ren Akiyama, or Kamen Rider Knight. If the dimwitted yet earnest Ryuki is a chaotic good, Akiyama’s Knight could be considered true neutral at first. The two riders, who again are opponents in the grand Rider Ryuki, begin to begrudgingly care about one another after bumping heads one too many times. While Ryuki wouldn’t be the same without their tumultuous friendship, they’re not the memorable cast members.  Other standouts include the Beetleborg throwback Zolda, a highly successful amoral lawyer whose reasons for fighting remain a mystery, and Ouya whose pretty much the dang Joker right down to the purple color scheme. 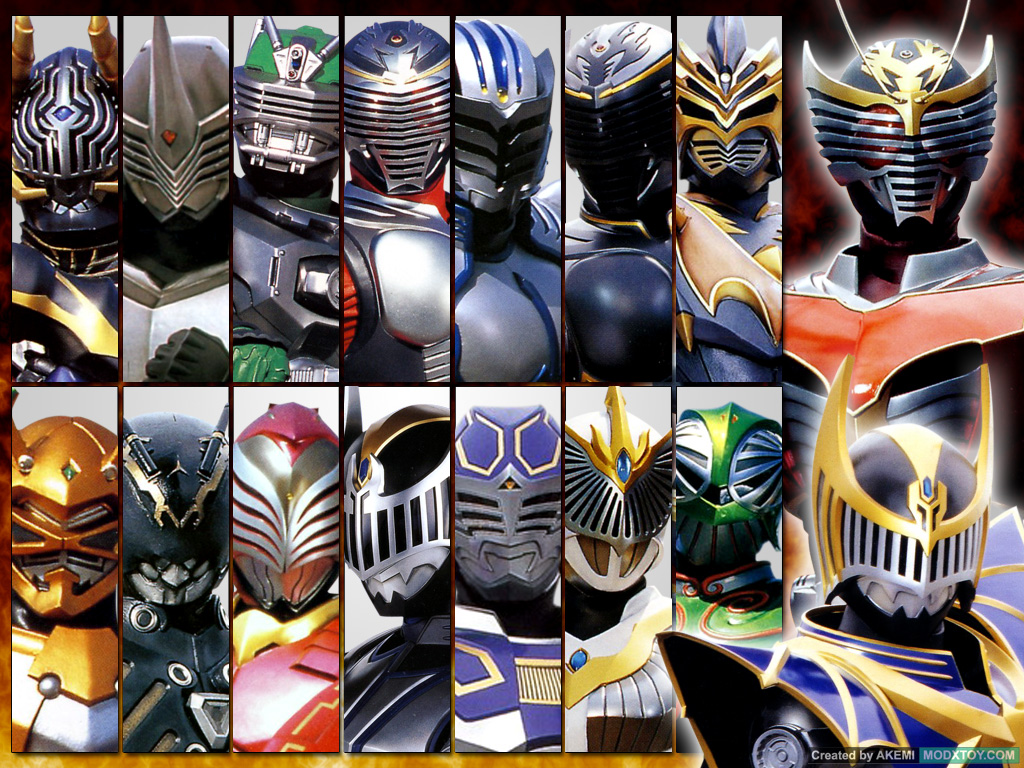 Soap-Opera Aesthetics and Other Worldly Atmospheres Are the Peanut Butter & Chocolate of Saturday Morning TV.

Kamen Rider Ryuki was the third Heisei Era series, which is a sentence that will only make sense to you only if you’ve already entrenched yourself in the world’s premiere grasshopper-inspired Tokusatsu series. Created in Japan’s Showa period, the series created between 1971 and 1989 are referred to as the Showa Era riders. Aside from a few films, the series took a decade long break before returning in 2000 with Kamen Rider Kuuga at the start of the millennium, kick-starting the Heisei Era of riders as the country was in that era at that time. Agito followed a year later, and then Ryuki making it the third Heisei series and the eleventh overall Rider TV incarnation. The Heisei shows can be broken down further into two periods which, from as far as we can tell, can be marked with an upgrade to HD Cameras and a more streamlined, definitively ‘kids’ oriented flavor. Before then, it looked like a comic book movie made with camcorders, and Ryuki was all the better for it. 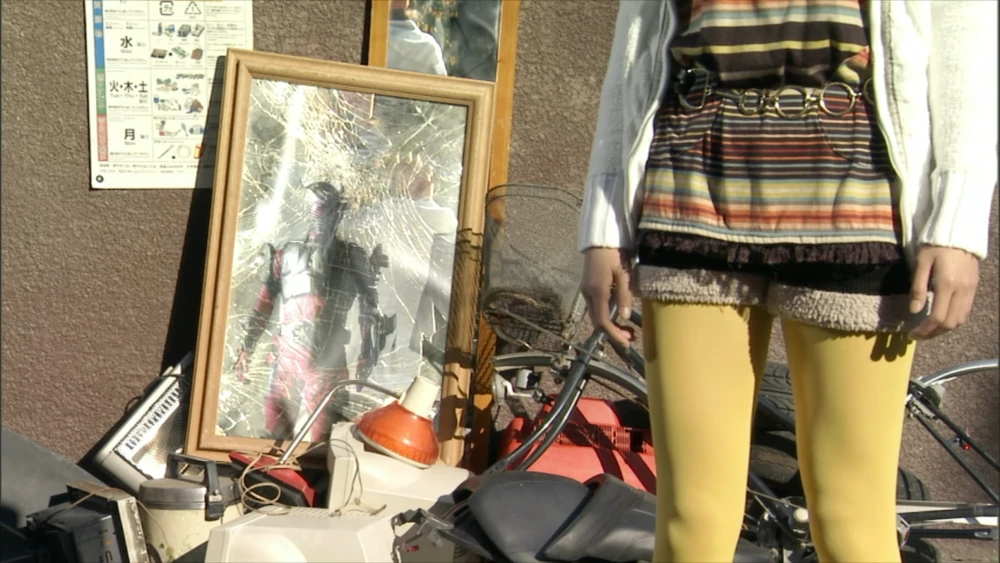 While it’s true that first-generation iPhones took better video than the cameras used to film early Heisei Kamen Rider, that raw quality actually worked in the favor of those shows and Ryuki in particular. The lack of polish imbued by that early digital camera technology made those shows all the more visceral; Instead of super slick superhero CGI fest, you just had dudes in cool suits bashing the crap out each other. That soap-opera visual grime coupled extremely well with Ryuki’s mirror world, an empty alternate space where the majority of these rider battles take place. A palpable eeriness manifests that occasionally puts the show in line with (and I can’t believe I’m drawing these parallels) the likes of Twin Peaks or Videodrome. With so much of the score being the haunting sounds of early computer production, alien synth pads and even some jungle type beats, Kamen Rider Ryuki is surprisingly an atmospheric experience. 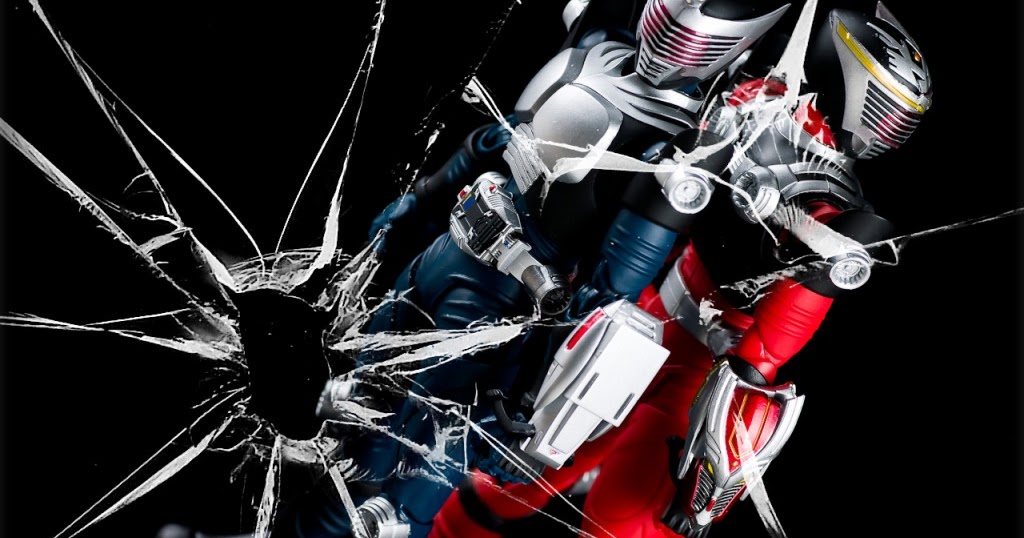 There are just too many iterations of Kamen Rider for any one series to be the definitive one. However, those who’ve seen Ryuki admit that this clunky and magnetic friend vs friend kids show sits in a category of its own. Despite being unique, that claim is perhaps best supported by two shows that wouldn’t exist. Both these works were wild, ambitious experiments that have since stood completely in their own lanes. One now boasts a legacy bigger than Ryukis and the other is largely forgotten by anyone not currently reading its Wikipedia page, but all the same, it broke some new ground on its way to failure. 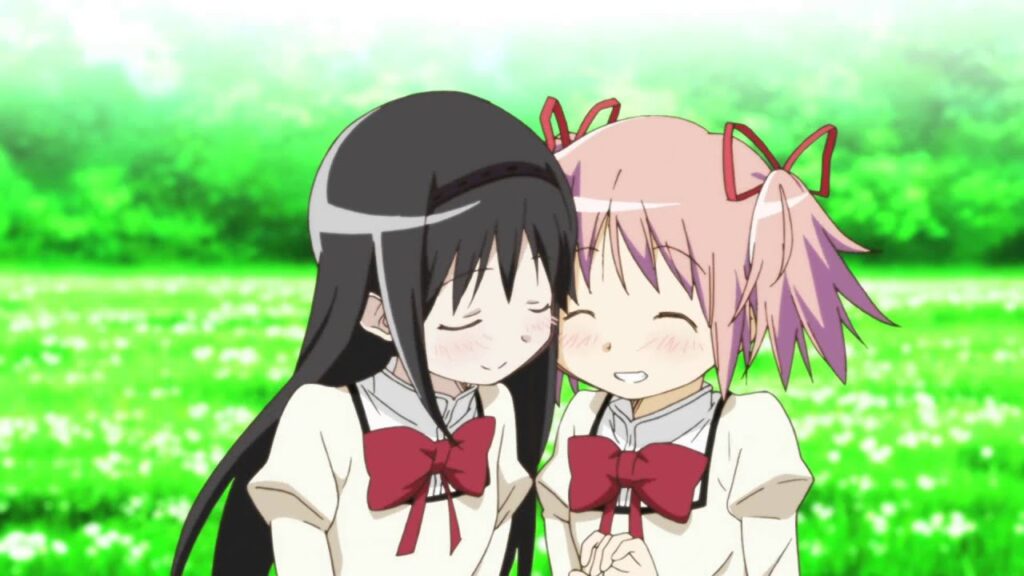 The former, of course, is Puella Magi Madoka Magica; Madoka’s head writer Gen Urobochi’s love for Ryuki has always been an open secret, and after his masterwork Madoka Magica came out, fans put two and two together. With similar hero against hero themes and other spoilers parallel in both shows, Urobuchi’s influence was so obvious that Toei offered him to create his own Kamen Rider series in 2013, called Gaim.

Surprisingly, that’s the other show. No, Kamen Rider: Dragon Knight is an American attempt at a Power-Rangerization of Kamen Rider with Ryuki as the adapted series, created a whole 7 years after its original aired in Japan. It is the only one of its kind, and there had to be some reason producers wanted to Frankenstein Ryuki with American footage and not any newer iteration. 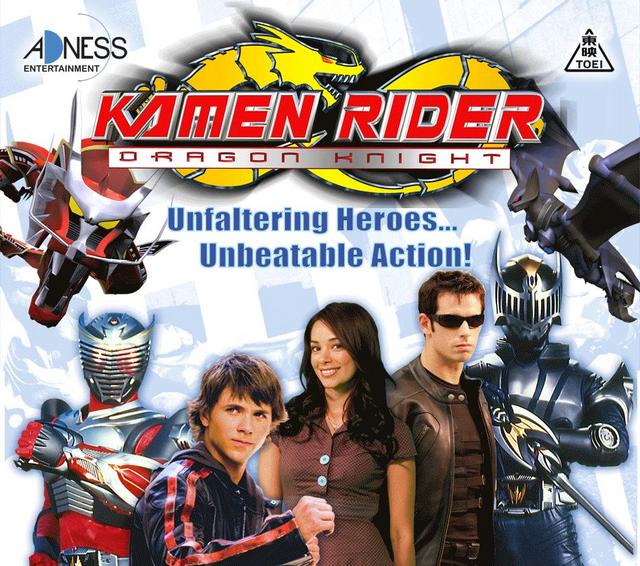 I hate to tell you this, but there’s no legal way to watch Kamen Rider Ryuki in English. Even its American retelling doesn’t exist anywhere, and while that’s possible for the best, Ryuki not being front and center on every streaming service is a disservice to anyone who would be willing to watch a man dressed up as an edgy grasshopper fight twelve other men dressed up as edgy grasshoppers. There’s hope though, because Kamen Rider has slowly been peeping its head onto the Tokusatsu-themed streaming service named Toku. Kuuga was acquired early last year, and just last week or so, the second Heisei Rider series Agito has also been announced for the platform. That would logically dictate Ryuki to be next if the stars align themselves correctly. Toku, if you’re listening, I’ll commit to one month’s free trial (which even if you wouldn’t profit off of would look good for your statistics) if you license Kamen Rider Ryuki.