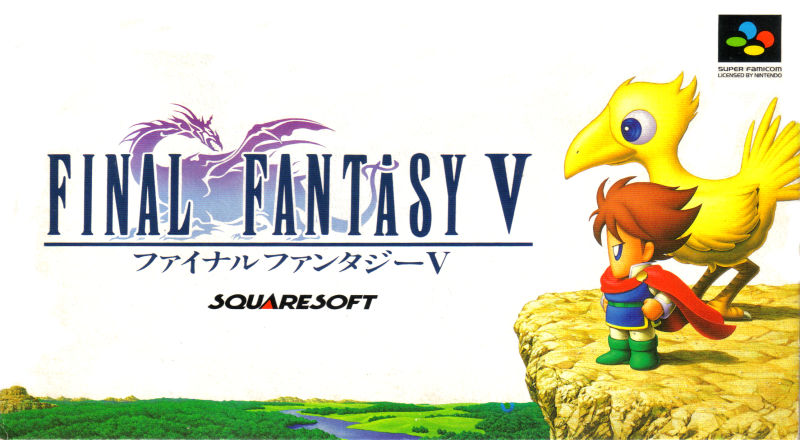 Why You Should Play Final Fantasy V: An RPG of Infinite Possibilities – OTAQUEST Selects #27

Final Fantasy V has become one of those famously underrated things that everybody knows about, but nobody bothers to give a shot. It’s like the English dub of High School DxD, or Black Sabbath during the Dio years. It seems that whenever discussing the legacy of old school Final Fantasy, the fifth entry will invariably be mentioned as this great game that everyone forgot about as soon as its younger siblings VI and VII came out. The cult popularity of 2012’s Bravely Default sparked some discussion regarding its spiritual predecessor, although not enough to fuel any significant resurgence of interest. It’s a shame too, because I don’t think today’s gaming generation has a clue just how great Final Fantasy V is. On a pure gameplay level, it easily is my favorite of the older Final Fantasy games.

Released in 1992, Final Fantasy V is the middle child of the trilogy of Final Fantasy games on the SNES and the obvious follow-up to Final Fantasy IV. It’s got the retro 16-bit graphics, a mish-mash of classic fantasy tropes blended with elements of steampunk, and an evil Darth Vader-looking warlock seeking the four elemental crystals to plunge the world into chaos and despair. Most important of all is the Active Time Battle system that conducts the turn-based battles in real-time, making each fight a test of agility as well as endurance.

Yet with its innate class system, V feels more like Final Fantasy III, which in turn feels like the very first Final Fantasy. The original NES title had the player create a four-character party at the game’s start with six distinct classes to choose from, which lent its way to a variety of choices. But the downside is that once you made the decision, there was no going back. You don’t like your party of two white mages, a black mage, and a thief? Tough luck. Continue the game or start back up from scratch. Those are your options.

After avoiding classes altogether in Final Fantasy II, III would revitalize classes with its own unique system. This one would bring back customizable teams in the vein of Final Fantasy I that the player could switch up at any time. The catch? A pesky system based on capacity points forces the player to be mathematical and downright picky about when and where they could rearrange their party. Its 3DS remake would alleviate things by stripping capacity points in exchange for a Job Adjustment Phase that would temporarily reduce job-transitioning characters’ stats.

That problem is eliminated in Final Fantasy V. The player is now allowed to change their party’s classes (now called jobs) at any given moment with no strings attached. And it does this in the most maximalist way possible by giving the player 22 jobs to choose from, each of them saddled with unique abilities that you can mix and match across different classes. You want a monk that can wield swords? Have at it. Need an archer who is handy with healing magic? Go nuts! 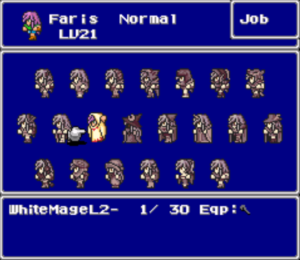 By no means does this job system make the game easier. Every class has its own advantages and disadvantages, and it will take you a long time to create the ideal overpowered team. Certain dungeons are harder to trek through, and some enemies can become monstrosities to take down. This challenge allows you to make creative and strategic decisions almost every step of the way and adds a healthy layer of complexity. There are few things more satisfying than finally defeating that tough-as-nails boss with the right team.

Often, the best type of RPGs are the ones that are malleable enough to ensure that no playthrough is ever the same. It’s what makes things like Pokemon’s changeable party of six and The Elder Scrolls personalized characters so appealing. The very same can be said about Final Fantasy V’s job system. Besides having inventive worlds and nostalgic turn-based combat, Final Fantasy V’s charm is rooted in a job system that ensures the player a never-ending number of ways to play the game. For instance, you can spend endless hours customizing your parties like I did, or you can be hardcore and have one unique party stick with you the entire game. The choice is yours. 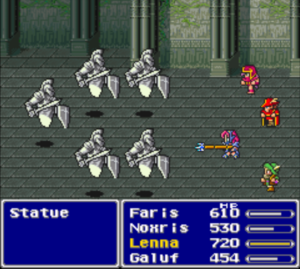 Of course, even with this innovative style of gameplay, it’d be a lie if I said that Final Fantasy V is without its flaws. The major faults rest within its story, which is the same tired ‘Heroes of Light restore the world’s Crystals’ story we’ve seen before. Bartz is the wandering adventure/player insert character archetype. Old man Galuf is full of spunk, but is just another JRPG character with amnesia. Lenna and Faris’s sisterly relationship is cemented by the game’s first act and doesn’t go much further from there. Perhaps you could chalk this up to the game putting gameplay before story. But to those who were spoiled by the Star Wars-esque mystique of Final Fantasy IV’s narrative, V’s story seems like a huge regression. VI and VII’s novel-like narratives would soon arrive and further cheapen what little drama V had.

Still, putting Final Fantasy V’s generic story aside, the game holds up incredibly well three decades later. The gameplay, the soundtrack, the graphics, and the 30-to-40 hours of gameplay are so easy to get lost in that the plot doesn’t even matter. The game highlights the best of what the early 90s JRPG scene had to offer, and the freedom given to the player makes it ahead of the curb.

The game’s production was pretty significant in Square’s history, as it was the first big Final Fantasy title to include Yoshinori Kitase and Tetsuya Nomura in major developer roles. Kitase had previously assisted in designs for lesser-known Square titles, while Nomura was just a humble debugger. Final Fantasy V’s success brought these two men to the forefront of the JRPG scene. Kitase and Nomura would reach their artistic peak with Final Fantasy VII, and the latter would move on to create Kingdom Hearts. 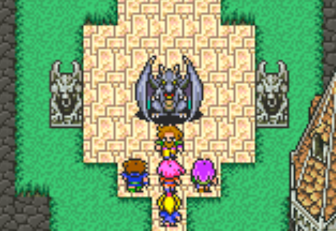 Final Fantasy V was a hit in Japan and even got its own sequel OVA directed by Rintaro of all people. However, Square deemed the game’s hardcore RPG mechanics inaccessible to international audiences. Final Fantasy V wouldn’t get an international release until 1999, a good two years after Final Fantasy VII had made its meteoric impact on the world. V, originally on the Super Famicom, became bundled with VI as part of Final Fantasy Anthology on the Playstation. Fans would dismiss this port for its butchered script and tediously slow load screens.

It wouldn’t be until seven years later that fans worldwide got a proper release with the Game Boy Advance remake Final Fantasy V Advance, which fixed up the load times while adding four new playable jobs and a bonus post-game dungeon. Despite these additions and my nostalgia for it, this is not what I consider the definitive version. It still has its script issues, namely the inclusion of lame pop culture references and jokes that seem like they were culled from a bad episode of Family Guy. It’s also a complete breeze to go through. I can barely remember a boss fight that ever gave me any trouble. Things would get even worse when it was remade again for PC and mobile, throwing in new graphics and an updated interface that strips away the original’s retro charm. The end result looks less like a legit Final Fantasy game and more like something whipped up in RPG Maker.

Despite being criminally overlooked by the status quo, Final Fantasy V snagged the number 15 position on Famitsu’s 2006 list of the greatest games of all time, beating out the first two Kingdom Hearts, the first Super Mario Bros., and The Legend of Zelda: A Link to the Past. Twelve years later, the game is still fawned over by its small and devoted fanbase, which has since made things even better with its own set of challenges and randomizers. This level of creativity is proof of the game’s staying power. By blending addicting RPG action with an enthralling sense of customization, V has ensured that no person’s fantasy-induced playthrough will ever be their final one.