Some of us have been waiting a hell of a long time for Super Mario Sunshine to make its grand return as part of the Super Mario 3D All-Stars collection on the Switch. Super Mario 64 and Super Mario Galaxy, the absolute perfect games that they are, have been rereleased since their first console go around, the former more than once! With Super Mario Sunshine, unless you’ve got an old copy and a Gamecube laying around, you’ve been out of luck. To get it out of the way, yes, we wish that Super Mario Galaxy 2 was included in the collection but not only are we not here to talk about that today, but our bets are also on all four Mario games becoming digitally available once the controversial 3D All-Stars limited release finishes its course next march. We’re here to argue though that getting to play Sunshine again, especially now, is worth the full price of admission alone.

Super Mario Sunshine has something of a mixed reputation. Since it’s initial release 18 years ago, a not small number of fans were off-put by the F.L.U.D.D. (the giant water Jet on Mario’s back) mechanics and felt that because of them the game wasn’t a proper follow up to Super Mario 64. Objectively no game could ever be as 64 is the true Alpha of modern games.  Since that time though, we’ve witnessed public opinion ebb and flow with millions falling all over of the spectrum. Some say it’s the best because it’s the most unique, some the worst, and others might use the words ‘flawed masterpiece’ to describe Mario’s island vacation of a game. On the whole, we veer towards that third option but not because of the unique F.L.U.D. based gameplay; In short, this one’s not as smooth sailing from start to finish compared to likes of Galaxy 1 and 2.

But it is still fantastic. 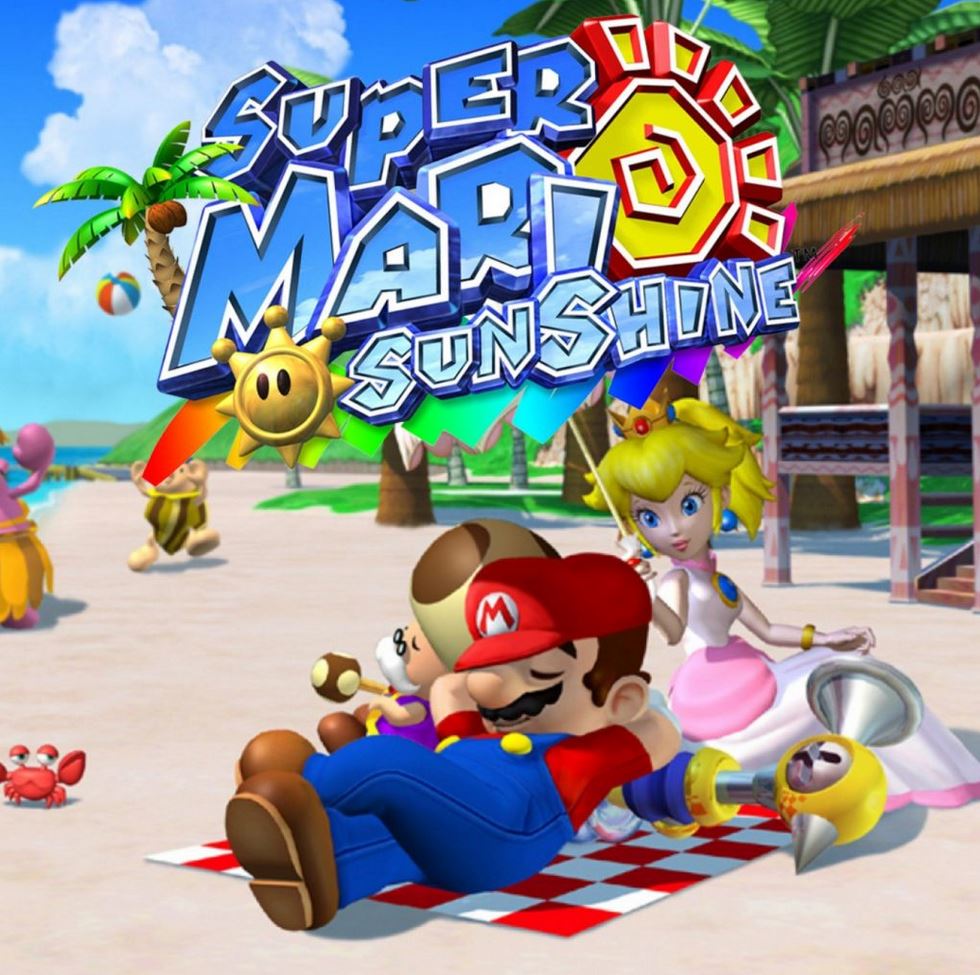 Amongst the rest of its havoc, COVID 19 took much of our summers away. No going to the beach without risking the death of you and your loved ones. No post-graduation trip to Europe with your best friends. Even backyard barbeques with more than just your immediate family were out of the question for much of the western world in 2020. The closest most of us got to seeing the ocean was cycling through the obligatory beach episodes in our seasonal anime. Despite the fact that Super Mario 3D All-Stars comes right at the beginning of all, with Super Mario Sunshine back in our hands it’ll be like we could simulate the 2020 summer we couldn’t experience.

Super Mario Sunshine entirely takes place on the lovely Isle Delfino; A beautiful island resort somewhere off the coast of the Mushroom Kingdom. It comes complete with an Amusement Park and an active Volcano! What more could want? Unfortunately, it’s been awash in particularly toxic paint that harms the local residents, the Piantas. Furthermore, there’s a very Y2K looking shadow Mario running around and graffiti-ing giant Ms all over the place, leading the island police to think the real Mario has been doing crimes. While we’d never rat on our favorite plumber, he’s innocent of everything besides cleaning the streets with his F.L.U.D.D. and picking up some loose change along the way.

Isle Delfino itself goes down in gaming history as one of the best hub worlds of all time. At the very least, jumping around from hotel rooftop to hotel rooftop and then rocketing up to the sky with the F.L.U.D.D. before landing on a Yoshi and sampling some of the local fruits is a blast. You’ll spend hours exploring every sunny nook and cranny looking for those blue stars and you’ll enjoy every second. Each visually distinct level also plays into the dual resort and ocean themeing, and while they’ve always looked great now rendered at 1080p, Ricco Harbor and Noki Bay will stand out more than ever before. These are worlds you’ll want to live in. 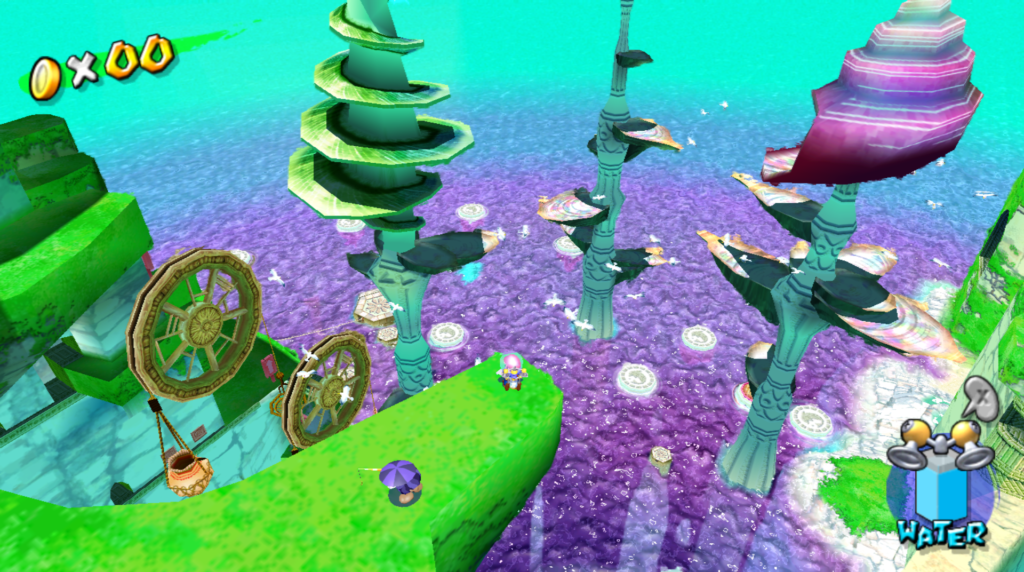 The Game Platforms As Smoothly As That Poolside Mojito

Whether you’re staring at the palm tree or diving off them into iridescent oceans, scenery and atmosphere alone may make a good game but they don’t make a fantastic, bolded, and italicized again for emphasis. If there’s one area where Super Mario Sunshine does actually exceed Super Mario 64, and this may irk some of you to here, is tight Mario controls in-game. While 64 controls as well as any game could for its titular system, technologies had progressed by the Gamecube area and Sunshine reflects that. You’re not just soaring from pipe to tree to the top of an unfortunate squid’s head, you’re doing so with Gamecube controller precision, still the most trusted hardware to any Smash player for a reason! Truly Mario feels like an extension of your fingertips making that island immersion ever more palpable. Sunshine doesn’t have the speedrunning and game-breaking scene 64 has but the completely refined control schematics of Super Mario Galaxy and Odyessy without it.

This brings us to one point we’ve never understood about the F.L.U.U.D. criticism; All the water nozzle mechanics are in addition to the schematics that Super Mario 64 set up. Of course, it’s necessary to utilize to get many of the game’s Shine Sprites (Power Stars essentially) but practically all of Mario’s 3D move-set is here! You got your triple jump, ground pound, wall jumping, and all with extreme precision! In fact, there are segments of the game where the player is F.L.U.U.D.less and these secret levels contain some of the most interesting and skill-based 3D platforming in history, requiring a technical proficiency that ‘hardcore gamers’ should welcome! The only thing is, you can play those segments as well as being able to shoot rockets at a giant mecha bowser on a roller coaster. What a drag! 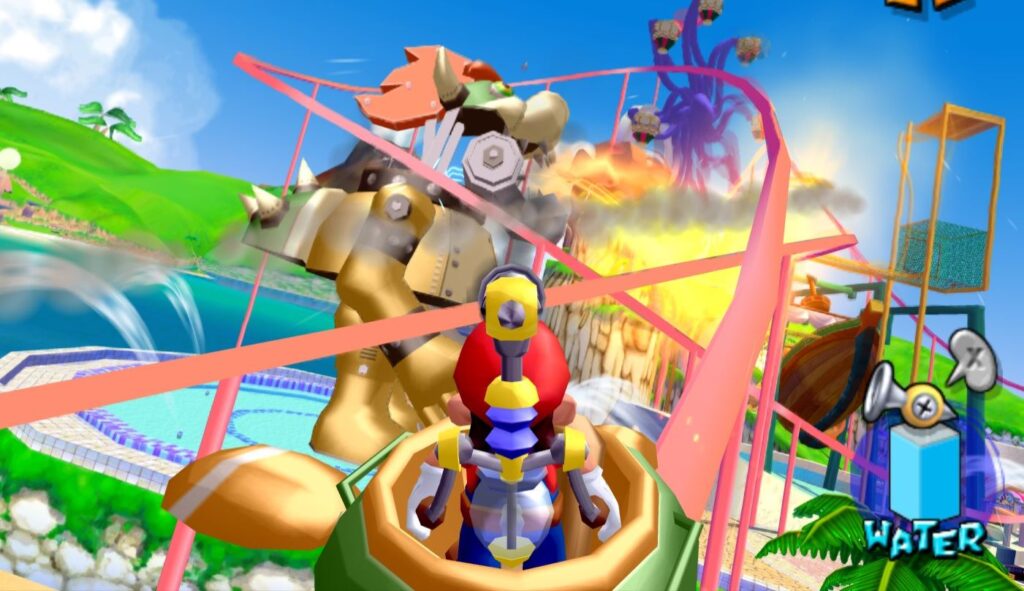 Sunshine’s Charm Washes Away All Its So-Called Flaws

Yes, if we put our nitpicky Games Journalist™ hat on and hold our old Gamecube copy of Super Mario Sunshine up to the light, you’ll see it’s a got some nicks. There are a handful of particularly obtuse Shine Sprites to collect and ultimately the one flaw of it’s relaxing Island theme is that Sunshine doesn’t offer the variety that 64, Galaxy, and Odyessy do. Aside from those frustrating one-off missions, every single second of this game is tropical bliss. It oozes with charm and charisma in abundance in both locales and even the core mechanics of the game. The inclusion of the F.L.U.D.D. makes for much unique platforming that no other game has even tried to pull off. While on ‘Metacritic dot com’ it’s the lowest-ranked of the three games in the collection, a fact which we wouldn’t even disagree with, getting to play Sunshine once again with the added 1080p and portability of the Switch makes it a well-spent 60 dollars alone.

Super Mario Sunshine as part of the Super Mario 3D All Stars collection is out on September 18.