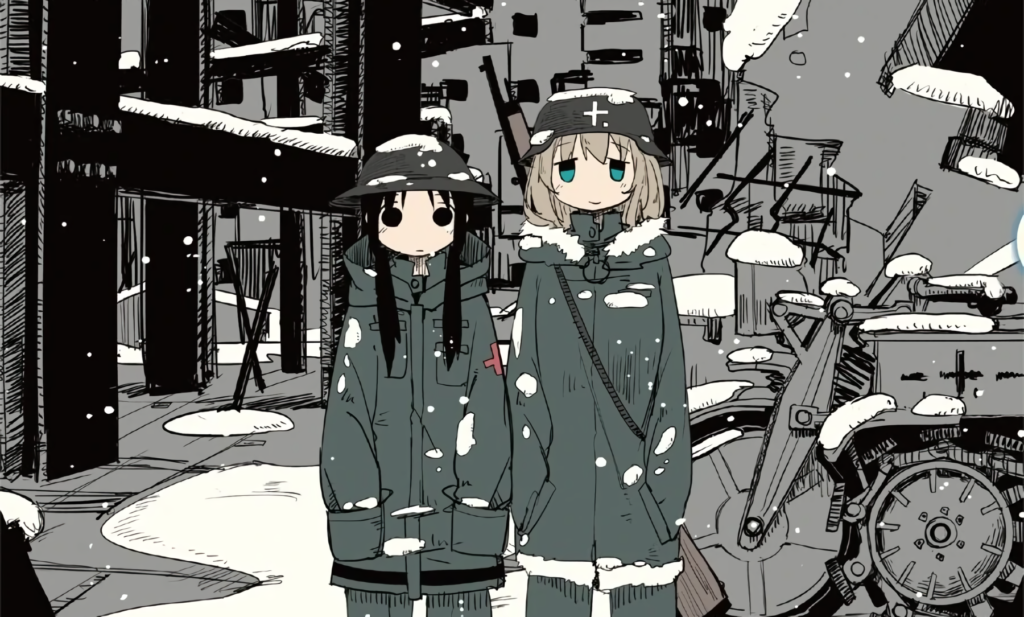 Japanese pop-culture is a wide-reaching and plentiful subject to explore. If you’re new to the worlds of Japanese anime, music, manga, and more it can be tough to catch up with the decades worth of masterful works to consume. In our new ongoing series of articles, OTAQUEST Selects, we aim to make traversing the vast landscape of Japanese pop-culture just a little bit easier by recommending our favorite works across all mediums and giving you the background needed to jump right in.

Girls’ Last Tour (Shoujo Shuumatsu Ryokou) has managed to cultivate for itself, in a very short space of time, a dedicated cult following. Following the journey of the young girls Chito and Yuri through a post-apocalyptic wasteland, the series was serialized in Shinchosha’s Kurage Bunch from 2014 to 2018 and is available to read in English from Yen Press. As to why the series has garnered such a passionate following, that answer lies both in the mastery of its presentation as well as its core ideas, which remain relevant more than ever today. Here’s why you should read this manga series.

The first draw to Girls’ Last Tour is, undoubtedly, its characters. Chito and Yuri are at once cute and moe, but at the same time incredibly real and charismatic. Chito, the straight man, plays her role well as the foil to the spontaneous, energetic Yuri, who is the driving force behind many of their adventures. In this sense, the series is similar to many other slice-of-life comedy series. 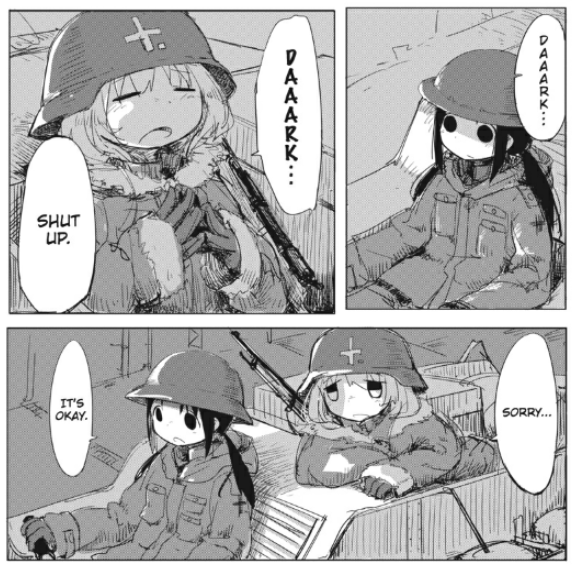 Yet, underneath the comedic surface, there is a real connection between the two that serves to capture the sympathy and attention of the readers. While Chito may chastise Yuri for her stupidity and her selfishness, they ultimately need each other; in this sense, we feel a genuine companionship between the two – something which has cemented them so keenly in the minds of many fans.

The series’ setting is also incredibly captivating. Although a post-apocalyptic landscape isn’t exactly something new – you can read Akira or Dr. STONE for more of that – the way that it is presented is entirely unique. Taking its cue from Soviet-era brutalism and industrial machinery, the aesthetic of Girls’ Last Tour oozes with the fallout of a society consumed by its own inventions. It is also rendered in beautiful jagidness by series creator Tsukumizu, which at first glance appears unrefined, but quickly takes on a charm of its own. 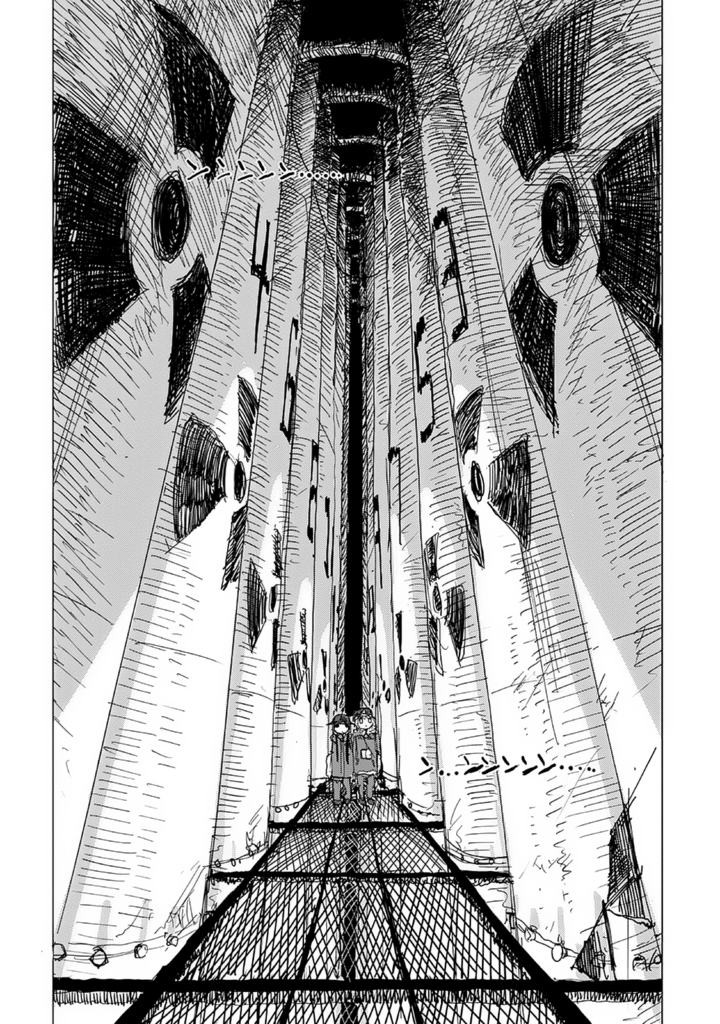 Tsukumizu’s brilliance isn’t just contained to the art of Girls’ Last Tour, either. The chapter-by chapter narratives of the series, comprising Chito and Yuri’s adventures and misadventures in a post-apocalyptic world, are perfectly crafted with a clear sense of set up, development, and pay off. Not a single moment is wasted – and neither will any of your day be by reading this series.

The series’ narratives also communicate brilliantly the core ideas of the series, which teach us to appreciate the little things in life. Such episodes as ‘The Sound of Rain’, where Chito and Yuri discover the unexpectedly musical properties of rain, and ‘Cooking’, where they discover the joy of cooking for the first time, serve to both heal the heart and inspire us to pay more attention in our everyday lives.

The impact that Girls’ Last Tour has had on me, personally, is hard to describe. The relationship between Chito and Yuri came at a particularly difficult point in my life, providing me with a sense of comfort in a time where there wasn’t much. I found myself lost in Tsukumizu’s fictional world, entranced by its unique aesthetic and thrilled by the balanced narratives. Furthermore, the idea of an endless journey has fascinated me – so much so that I have recently picked up bike touring, longing to discover the little things in life just like Chito and Yuri did. It may sound corny, but I hope that Girls’ Last Tour can affect you in a similar way, too.

Finally, a word on the different adaptations. Alongside its inherent strengths, one of the reasons why Girls’ Last Tour has garnered such a dedicated following is because it has benefitted from an anime adaptation. Produced by White Fox in 2018, the Girls’ Last Tour anime is very good, faithfully adapting the source material and adding some its own charm through voice acting and music (Inori Minase and Yurika Kubo are perfect as Chito and Yuri respectively).

Nevertheless, by watching the anime instead of reading the manga, you are depriving yourself of the full range of Tsukumizu’s incredible art (the anime can only communicate a fraction of this due to its complexity), a gorgeous physical release by Yen Press (almost the same as the Japanese version), as well as a complete story, as the anime only adapts up to volume 4. That ending is, in turn, one of the reasons why the series has stick around so vividly in many fans’ hearts. To discover why, read the manga for yourself.

The Girls’ Last Tour manga is available in English via Yen Press. The anime is also available to stream via Amazon Prime.