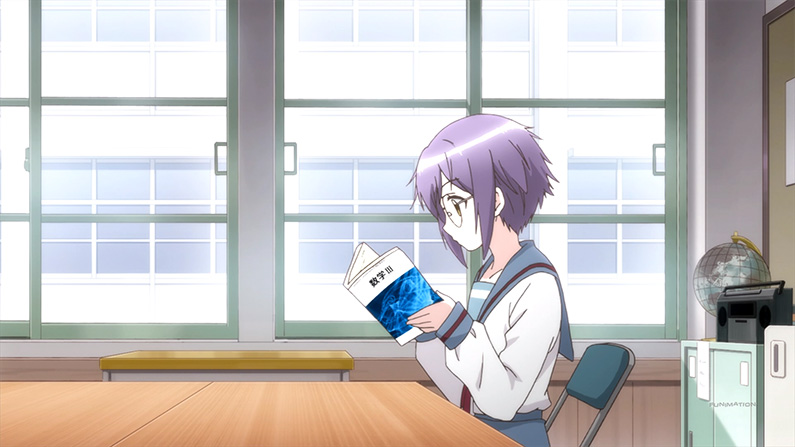 If you are a fan of The Melancholy of Haruhi Suzumiya, but you haven’t read the light novels, you are not getting the full picture.

And if you used to be a fan, but left to escape the endless recursion of time that the show fell into for a while, the light novels are a great way to get re-acquainted with this franchise.

Admittedly, few people outside of Japan would know about the Haruhi Suzumiya light novels if it weren’t for the TV series.  So, perhaps we should take a moment to praise the series, which really does capture the spirit of the novels quite well.

Haruhi Suzumiya took the world by storm in 2006. It inspired lots of cosplay, and crowds of Haruhi fans overwhelmed events at anime conventions. It even had its own “religion,” called Haruhi-ism.

And no wonder. Even after several viewings, the series — especially the first season — remains clever, unique and fun to watch. The series has a good, witty sense of humor.  It is a science-fiction series, but the science-fiction passages are intermingled with high school romantic comedy and just plain slapstick.

(If you need an overview of the whole franchise, you can read my article here.)

If you like Haruhi, you will probably like the light novels, which the anime is based upon. Haruhi is best enjoyed if you pay attention to the deeper stuff and take the time to really stop to think about it. No format lets you do that better than reading.

And a lot of what I just wrote about the anime series applies to the light novels as well.

It Started with the Light Novels

If you think you were “there from the beginning” if you were a Haruhi fan in 2006, you’re only partially correct.  In Japan, the Haruhi Suzumiya phenomenon began in 2003 with a light novel series by Nagaru Tanigawa.  The first 10 Haruhi books (11, if you count Surprise volumes 1 and 2 separately) were written between 2003 and 2011.  He added a 12th story in 2018.

The anime series is named after the first book. Most of the other books follow that same “The X of Haruhi Suzumiya” naming pattern — The Sigh; The Boredom; The Disappearance; The Rampage; The Wavering; The Intrigues; The Indignation; The Dissociation; and The Surprise.

Starting with Intrigues, none of the more recent books were ever animated.  That is perhaps the best reason to read all of the Haruhi light novels.  The books offer new stories about familiar old characters, and new characters who never made it into the anime.

Intrigues is a fun time-travel story, so naturally it involves a lot of Kyon and Mikuru interaction. It also introduces us to some new characters who will be more important later in Dissociation and Surprise.

Indignation consists of two short stories.  The first of these is a funny, silly story where the SOS Brigade members write stories.  The second one is a ghost story with a distinctly Haruhi twist to it.

The plot starts to get a bit complicated with Dissociation.   Two separate and divergent timelines are introduced, and they aren’t resolved until the end of Surprise.  These two books really ought to be read together.

Kyon meets an old friend from middle school, and Haruhi gets jealous.  In one timeline, there is also a new, younger member of the SOS Brigade.

The new characters from Intrigues return as members of an anti-SOS Brigade of sorts.  The anti-Brigade is equal, yet opposite to the regular Haruhi gang.  It would be too simplistic to call them evil, but their goals aren’t compatible with the SOS Brigade. Naturally, they come into conflict with the Brigade.

The story is a bit heavier than the earlier novels, but it’s still a worthwhile read.

That would have been the grand finale to Haruhi Suzumiya, except that Tanigawa wrote one more story, Seven Wonders Overtime, for Sneaker Bunko, a light novel magazine. The story is sometimes referred to as a short story, although it’s much longer than a short story normally would be.

The tale is a fun one, and it’s a good addition to the Haruhi franchise.  We get a lot of Kyon and Koizumi’s typical discussion of things supernatural, metaphysical and absurd. It also includes some silly bits where they try to figure out what sort of “seven wonders” Haruhi would enjoy.  Of course, Haruhi has her own wildly imaginative ideas as well.

In 2019, Seven Wonders Overtime was translated into English as The Reciprocity of Haruhi Suzumiya. It was included with the 12th volume of the Haruhi-chan spin-off manga.  You can find it and the rest of Tanigawa’s Haruhi stories at Amazon.

The light novels really add new layers to the Haruhi story, and are worth reading.