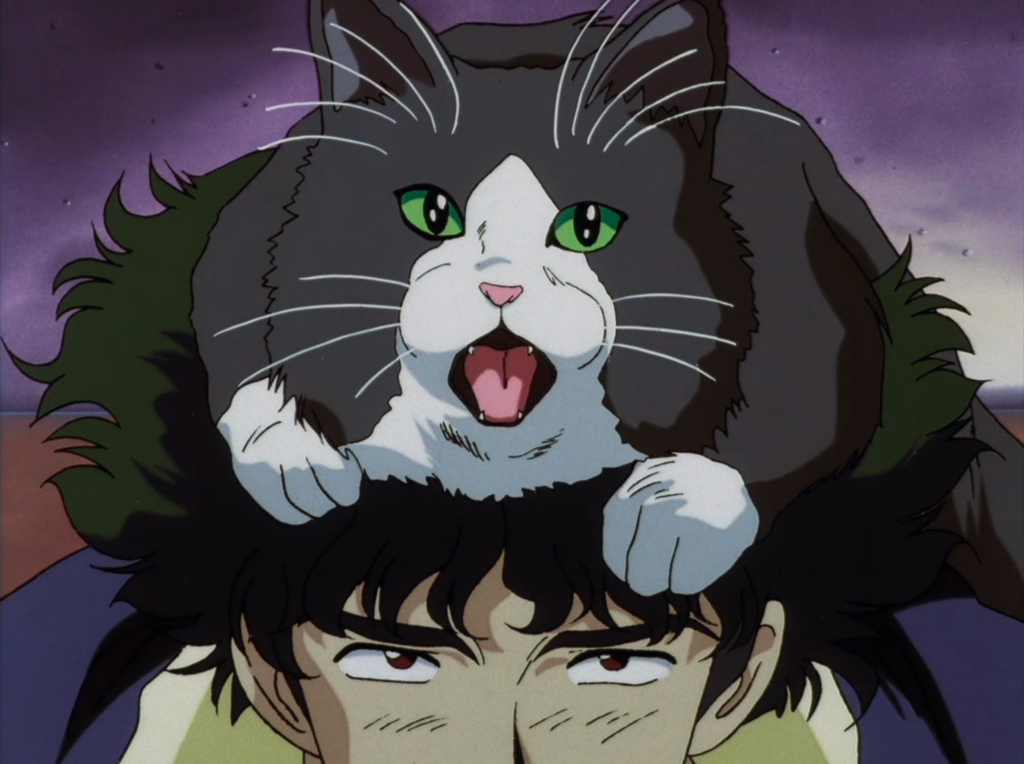 There are one-thousand and one reasons for you to watch Cowboy Bebop, many of which you have probably heard before: the iconic soundtrack, the charismatic characters, the haunting ending… but one thing that scarcely ever gets discussed is the series’ episodic structure, and how it uses this to its fullest advantage.

Ask yourself the question: what is the point in an episodic series? On the surface, this is so that the production can be broken down into congruent parts, giving this team that story and that team the other one. It makes long-running shows such as Lupin III and Detective Conan run that much better.

Yet, there is also another advantage: allowing us to spend more time with more characters in more distinct situations. This is different from a long-form, continuous narrative, which tracks one story and often one set of characters for the entire time. Admittedly, this narrative may then occasionally break for one-off, more inconsequential episodic asides (especially if it is adapted from a serialized medium, such as manga) but this only speaks further to the strength of episodic storytelling, and the reprieve it can bring to an author or team of creators.

How Episodic Narratives Are Used in Cowboy Bebop

So, how are episodic narratives used in Cowboy Bebop? First, they underscore the meaning of the story, and the journey of its main character. This is something that will be discussed later on. For now, it is worth focusing on how one particular, self-contained story speaks to the variety and complexity that episodic narratives can bring.

Episode seven of Cowboy Bebop, ‘Heavy Metal Queen,’ has long since been my favorite episode of the series. There are others, granted, that prove far more emotional and ultimately important to the overall narrative, but episode seven was always been a real indication of what made the series work so well: great moment-to-moment storytelling, and an excellent grip on characterization.

The opening moments of Cowboy Bebop episode seven (after the iconic OP) introduce us to the titular Heavy Metal Queen, VT, in the most kickass way possible: high octane guitar riffs, shots of her truck, and a space station cut together in quick succession. This quickly sets the tone for the rest of the episode and makes us eager to know more: who is this mysterious trucker who listens to this badass music? As it turns out, no one knows, which forms the basis of the entire episode. 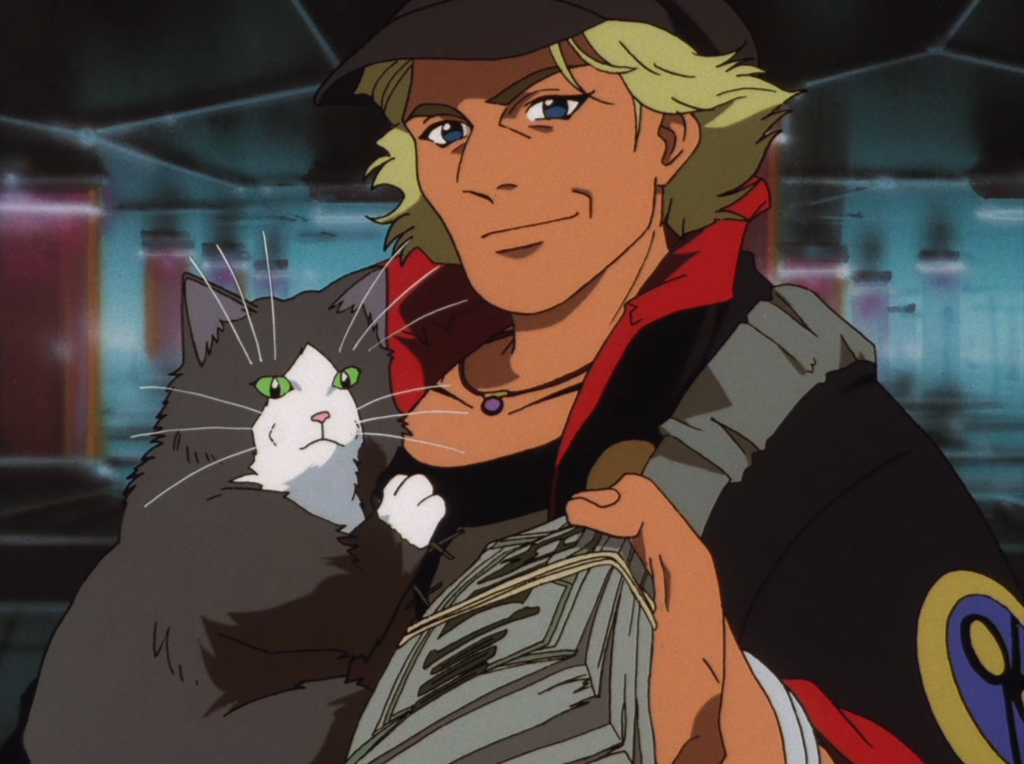 Upon entering the space station, VT is immediately accosted by another trucker who sets down a Woolong bill and attempts to guess her real name. This underscores the fact that no one knows who she is in a very organic, unique way. Her mystery is later expounded when she meets Spike in a bar, declaring that ‘Bounty hunters are all stupid scum’ and hinting that she used to know someone who also drank prairie oysters. Pulling these two things together then becomes the answer to all of our burning questions.

In just about seven minutes, even before the first eyecatch, Cowboy Bebop is able to do what many shows struggle to do: get us interested in an entirely new character and understand what makes her tick. That speaks to the quality of Michiko Yokote’s writing, who scripted this episode. As an aside, she also recently did a lot of Shirobako, which is excellent.

In any case, Cowboy Bebop episode seven also does a lot of subtle worldbuilding in much the same way that it does VT’s characterization. If you’ve ever wondered how trucking might work in the future, then Heavy Metal Queen has your answer: it’s basically the same, but just in space. It’s truly incredible the amount of detail that is crammed into each shot of each trucker’s cabin when VT contacts them for help. It shows that the team was dedicated to realizing this universe as vividly as possible.

Heavy Metal Queen also contains what is possibly the only high-speed truck chase set in space to appear in any piece of media, let alone in anime, but we’ll leave that aside for now.

As mentioned, Cowboy Bebop’s episodic narrative was not just intended to make production easier for the team over at Studio Sunrise, although it definitely had that advantage. It ultimately allows us to come into contact with more characters and more stories, the likes of which might be considered superfluous to a continuous narrative. An entire episode about space trucking might just be the best example of that.

Yet, Heavy Metal Queen also feeds into the overall aim of Cowboy Bebop’s episodic structure: to signify the journey of Spike Spiegel. This isn’t an original idea, by any means. It was first explained to me in a video by The Cinema Cartography, but it is one that I haven’t been able to get out of my head since, given how much sense it makes.

Spike Spiegel is a broken man. His tragic past has left him with no reason to live, and his heroic badassery becomes a little more worrying when you realize that he has almost no concern for his own life. Part of the reason why he does bounty hunting in the first place is to find out if there is any point in living. This is best summed up by his motto ‘Whatever happens, happens.’ 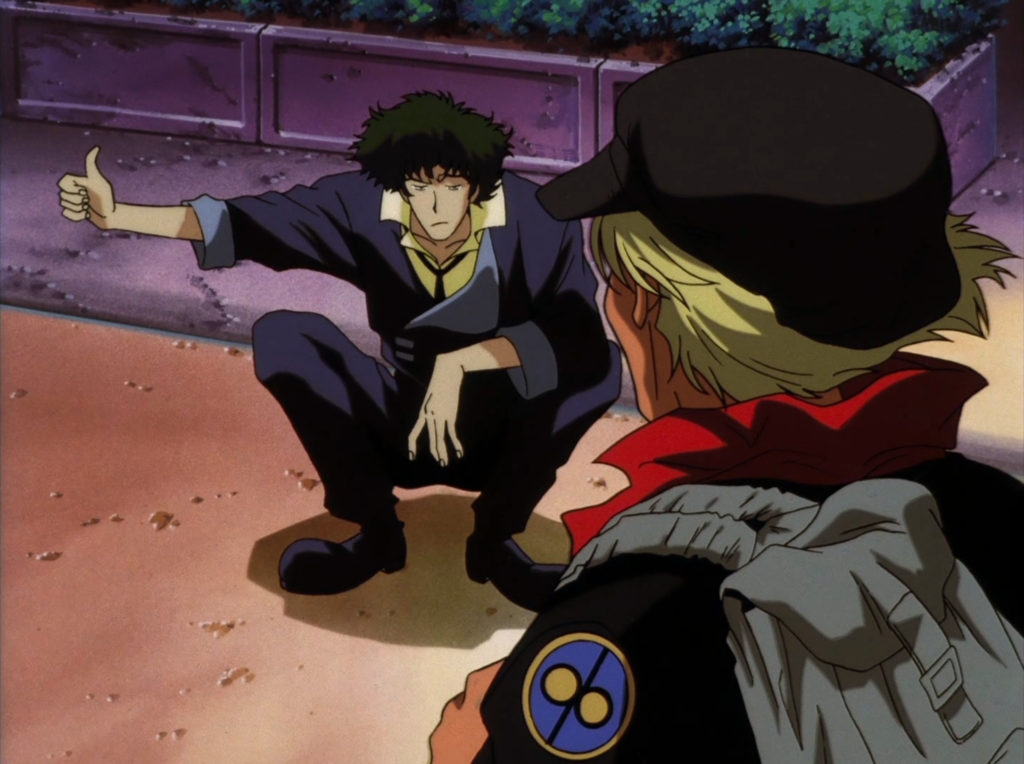 By coming into contact with different people and different characters across his journey, Spike is eventually able to face up to his past and reconcile with his trauma. The final shot of the series is the protagonist looking straight at the viewer, saying ‘Bang’ and leaving out with the words ‘You’re gonna carry that weight.’ Throughout the whole of Cowboy Bebop, we were watching Spike come to terms with his trauma and his regrets. Now, it is time to come to terms with ours.

Although small, VT’s interaction with Spike was one more step in helping him to complete his journey. The end of Heavy Metal Queen, in particular, is distinctive as VT offers him the money for guessing her name correctly, but he refuses to take the whole lot. Instead, he just takes one bill, saying ‘Give the rest to your husband… I’m sure he’s suffering from a hangover, so I’ll treat him to a prairie oyster,’ following up on VT’s hint in the earlier bar scene.

Perhaps Spike sees a little bit of himself in VT, someone who is also burdened with what happened in the past. But, unlike Spike, VT has moved on, crafting a new life for herself as a trucker, and apart from her husband in heaven. Maybe this story, along with countless others, was what was spinning around Spike’s head when he said, ‘I’m not going there to die. I’m going there to find out if I’m really alive.’

You can watch Cowboy Bebop via Crunchyroll.