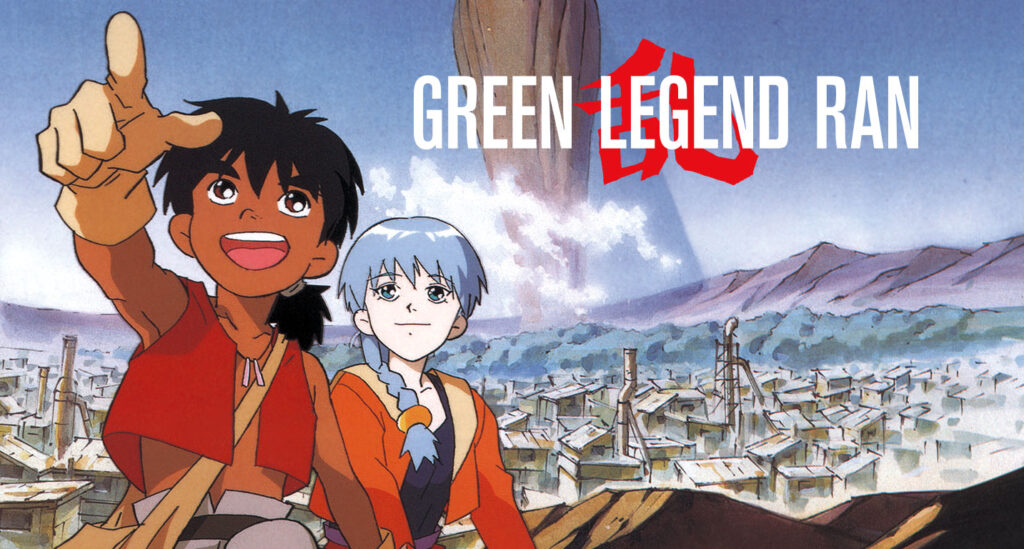 There’s a brief moment in Green Legend Ran that still gives me nightmares, nearly twenty-five years later. A slow pan of the camera reveals a mutated man, his body slowly and painfully becoming plant life, saplings and leaves bursting through his skin, hinting that he had breathed his last.

It’s a throwaway scene, and something the audience would miss if they blinked. The 3-episode OVA series is filled with these quiet and subtle moments, evoking little reaction at first, but detonating in your head hours or days later. It isn’t meant to be horror (it’s often dubbed a ‘sci-fi adventure’) but it’s unintentionally one of the scariest anime I’ve ever seen.

Just imagine Mad Max meets Nausicaä, and you’ll be on the right track. Now ask yourself this: what would become of humanity if we were fighting over drinking water? 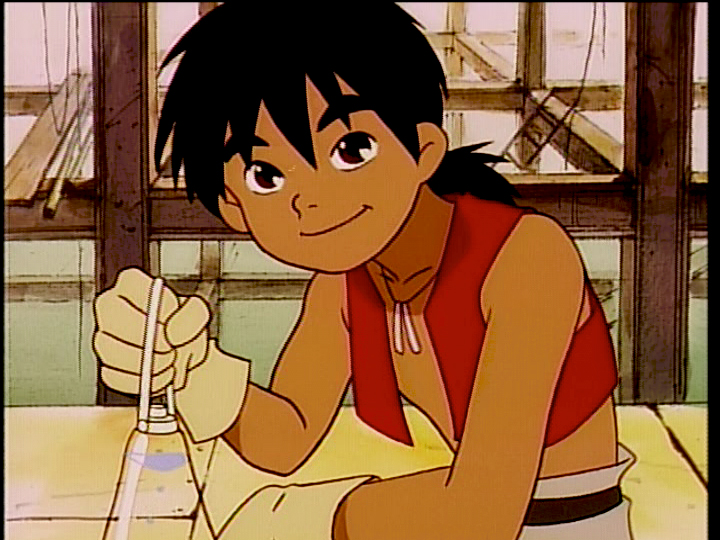 In the future, massive monoliths known as Rodo fell from space, transforming the Earth into nothing more than a scorched desert. The only place to find life-giving water is at the base of these objects, and after many generations, countless humans become Rodoists, part of a cult to appease the Rodo in the hopes of someday returning the Earth to its former glory.

Opposing these creepy and brainwashed servants are the Hazard, a rebel terrorist group tired of living under Rodoist rule.

Ran, a young Hazard-hopeful, leaves on a journey to find the man who murdered his mother. On the way, he meets the gentle Aira, a strange silver-haired girl, who is being pursued by both sides. Even she doesn’t know why, and as Green Legend Ran progresses (dropping plenty of bombshells in its two hour runtime) we discover that the state of the world isn’t what it seems. 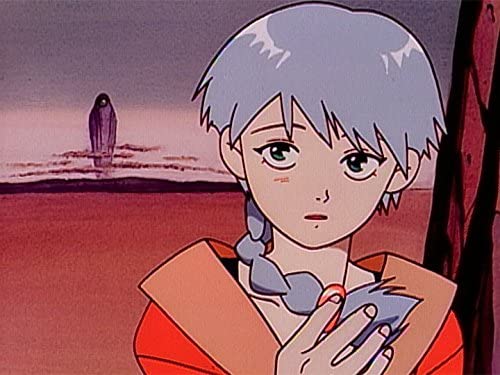 It’s tempting to treat Green Legend Ran as a plain-spoken commentary on environmentalism, but that’s not taking into account the heavy religious connotations interspersed throughout. The largest and most revered of the Rodo monoliths is referred to as the ‘Holy Mother,’ which beckons those with silver hair to return to the land of plenty within its walls. Certain people with silver hair have the ability to communicate telepathically with this deity, making them very attractive to humans looking for a way out of Rodoist rule.

In another nightmare-inducing scene, we see one such boy who has been graphically tortured for information, despite knowing nothing of the Gods’ plans. If humanity is being punished for their past transgressions, they are doing a pretty sorry job of making amends. 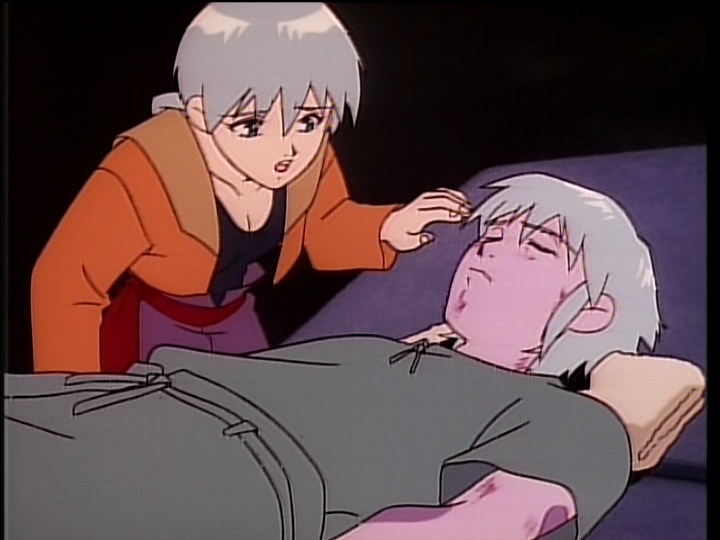 The theme of atonement leaps from character to character, regardless of faction. These cult members preach of their devotion to higher beings, but beat women and children begging for water in the street. Even Ran, our peppy protagonist, has murder on the mind: an eye for an eye, with the vivid images of his mother’s death driving him forward. Aira seems to be the only one who is utterly blameless, offering aid to a wounded Rodoist in the street without discrimination.

Is there anything worth saving? Is it any wonder that the world was made barren by these so-called ‘higher beings,’ given humanity’s actions? Is there even any hope of salvation?

Green Legend Ran is a personal journey with more profound meaning for some, with others more easily able to kick back and enjoy the action shots. Yoichiro Yoshikawa’s score is memorable, able to leap effortlessly between sinister and sanguine, the punctuation to Satoshi Saga’s brilliant direction. There’re mountains and valleys here, the more intense and troubling scenes followed by several moments of quiet and contemplation. It gives you time to recover as you journey through the narrative, and it does so without losing your attention. 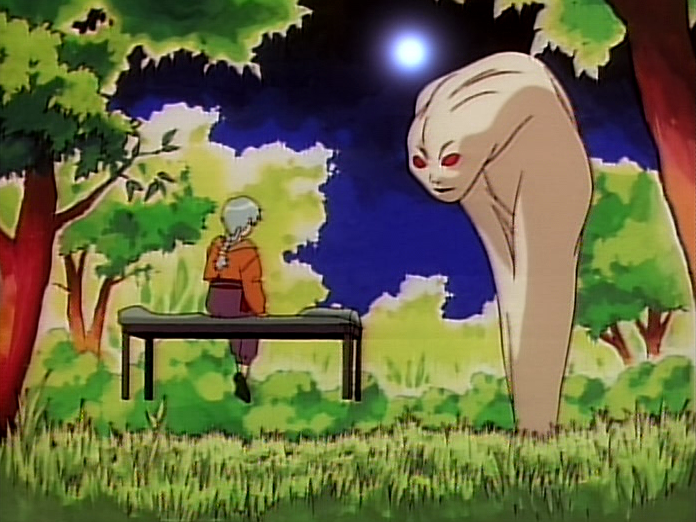 If you’re glancing over this and thinking to yourself ‘this looks incredibly familiar,’ you might be one of the older… ahem, more mature OTAQUEST readers. In 1997, Green Legend Ran aired on the Sci-Fi Channel in the US, and was edited down to resemble a typical feature film. Following this, a single dubbed VHS tape was available, or, if you were lucky, three subtitled VHS tapes in a box set. What followed was one of Pioneer’s first ever anime DVD releases, which was particularly archaic when looking back… it didn’t even have a menu.

Visually, the series is reminiscent of the 1994 OVA Final Fantasy: Legend of the Crystals, with characters displaying a fluid and overly exaggerated sense of motion. With a story so heavy and a world so bleak, the immersive background art is also worthy of praise, done in somewhat sloppily painted sepia tones. Can a scary desert world be beautiful? It certainly tried.

After Geneon ceased to operate in 2007, Green Legend Ran was briefly lost to time. Thankfully, it was rereleased by Sentai Filmworks in 2017. If you find a copy, pick it up before it’s gone!