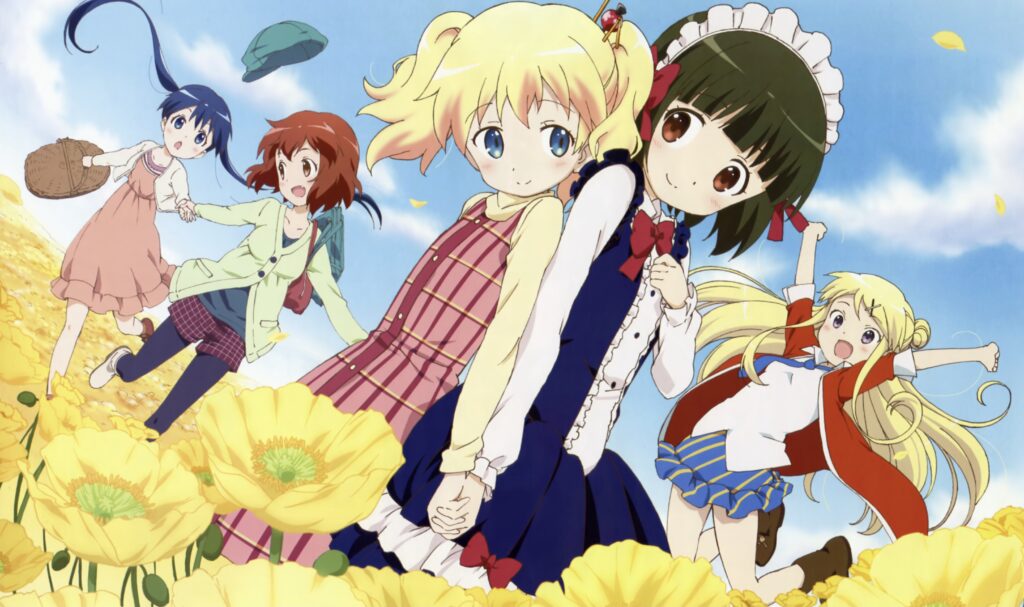 Back in 2013, right as the first season of the Kiniro Mosaic anime came to an end, I created a Twitter bot that aimed to tweet at the same time every day asking a single question: has Kiniro Mosaic season 2 been announced yet? In my excitement and stubbornness in insisting we get a second series of the anime, I would even make sure to retweet and share these posts regularly, as though this would somehow make a difference. I could sit here and pretend my bot, with its grand total of 10 followers, made a difference and successfully convinced Studio Gokumi and the production committee behind the series to invest in a second series, but deep down, I know the truth.

In the end, after amending the tweet following the announcement of the second series, I forgot the password and couldn’t make any further changes to the account. To this day, the account still lives a 2014 experience, continuing to tweet every day as though we’re still waiting for news on the anime’s second season (it aired in 2015).

I love Kiniro Mosaic, and have ever since 2013. The anime’s welcoming cast of characters and structure are indicative of everything you’d expect from a traditional slice-of-life comedy, but the series’ unique attempt at capturing a story told between the United Kingdom and Japan, as well as genuinely hilarious comedic writing, helped the anime to stand apart from a crowded competition. Now, with the manga concluded, the anime adaptation of this cross-continental comedy is coming to an end, making it a perfect opportunity to catch up on everything you may have missed.

While the story is never the focus of a slice-of-life anime such as this, the premise of Kiniro Mosaic is one of the things that helps this anime to stand out from the rest. Shinobu Omiya is a British-obsessed Japanese schoolgirl who takes part in a homestay in England with a girl named Alice Cartelet. While unsure of each other at first, they became great friends and kept in contact as pen pals after Shinobu returned to Japan. Five years later, she receives a letter saying that Alice is coming to Japan to stay with her, and soon after she transfers to her school and lives with her in Japan.

By visiting Japan, Alice gets to meet Shinobu’s other friends, Aya Komichi and Yoko Inokuma (with Aya holding clear romantic feelings for Yoko that manifest in several different ways), and the group hang out with each other during and after school ever since. Karen Kujo, a half-British, half-Japanese girl Alice was friends with in the UK, also makes her way over to Japan around the same time and joins them, but unlike Alice, her mastery of the Japanese language is a little more ropey, and she wears a garish Union Jack jacket that would cast you as suspiciously over-patriotic had she worn it in real life.

What’s impressive about this concept is how the British connection is lifted beyond being merely set dressing and flavoring to a character synopsis through the accuracy and attention to detail paid towards portraying British mannerisms and locations.

The first episode takes place entirely through a flashback of Shinobu’s first visit to the UK, where we see her first attempts at riding the train, meeting an understandably nervous Alice, and seeing sheep! Real sheep! Certain elements of this seem unrealistic as someone who has lived in the UK for all their life (unlike Japan, a child of Shinobu’s age would not be taking the train alone), but other aspects down to the design of rural train stations and the Network Rail posters hanging outside are surprisingly true-to-life.

Alice’s house is even based on a real place. During the production of the anime, the production team visited the UK for photo references and used the Fosse Farmhouse bed-and-breakfast in Wiltshire as the location of Alice’s home. Comparisons between the various rooms and exterior of the building to the scenes shown in the anime reveal startling similarities, with much of the food also taking cues from the food served in the hotel. Location scouting isn’t an unusual thing for any anime to take part in, but how this episode recreates local Cirencester and Kemble while creating an overall more personal and intimate episode tonally that captures the warm nostalgia of a first meeting and exciting adventure with only minimal jokes is a welcome introduction to the series.

More impressive is that this flashback is entirely anime original, expanded from only a small 4-koma strip in the original manga into an entire episode that enhances the rest of the series by deepening the friendship between Alice and Shinobu.

The rest of the anime takes place in Japan and is a mostly strict adaptation of the manga with rapid-fire jokes as a result of its structure, but it does still take the time to have some fun with the formula that can only be had through animation. Both seasons of the anime feature musical sections where the cast break into song in fantastical settings that remain some of the most memorable moments of the series. These are often prefaced on outlandish concepts: the musical in the first season of the show is centered on the magic of blonde hair, which Shinobu is obsessed with while the other characters play the likes of pirates.

It’s this willingness to endear its audience with creative tangents and playful interactions between the cast that has helped the series spawn memes and remain popular over many years. While the manga and its brief epilogue came to an end this year, the anime has received multiple OVAs alongside two seasons since its initial premiere in 2013. Unfortunately this, too, will come to an end soon with the release of a final theatrical film next month titled Kiniro Mosaic: Thank You!!

As the title suggests, this trailer and everything surrounding this film should feel like gratitude towards a fanbase that has been enamored by the show in the same way as Shinobu has been for a country halfway around the world. It’s a show I’ve felt a deeper connection with than I would have expected for a show that doesn’t necessarily do anything different more than refining the tenants of the slice-of-life genre into a shining diamond. I’ll be sad to see it go.

Kiniro Mosaic is available on Blu-ray through Sentai Filmworks.