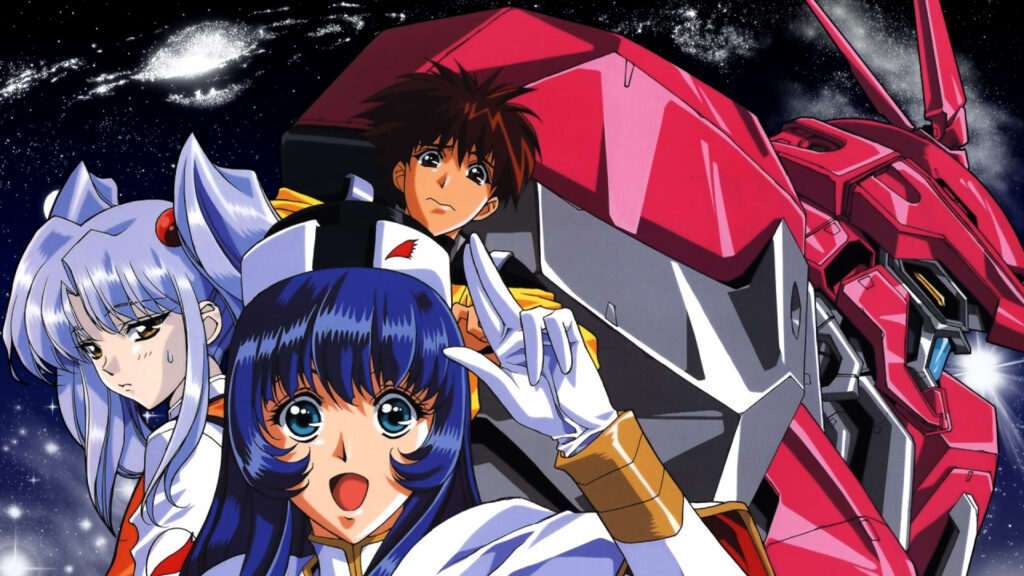 Ask a dedicated anime fan what was the defining mecha show of the 90s and nine out of ten times they’ll rightly answer Neon Genesis Evangelion. If you were to then ask them for a runner up or two, your answer would probably vary depending on where our hypothetical question answerer grew up.  Stateside fans who grew up with Toonami would likely say Gundam Wing with a possible Mobile Fighter G Gundam or The Big O in that third-place spot, though an older fan might opt for Giant Robo. A studied Japanese Otaku, however, could indeed also opt for one of the many 90s Gundam like 08th MS Team or Turn A Gundam, but another common answer would be Martian Successor Nadesico; Seemingly a lighthearted love-letter to mecha and sci-fi anime at first, filled with all sorts of nods and satirical elements, the show quickly grows into a genuine masterpiece of the genre.

Martian Successor Nadesico finds an aspiring young chef with amnesia named Akito Tenkawa thrust upon a space-faring battleship called the Nadesico which fights for earth against the mysterious Jovian lizards. Akito has no desire to be a mech pilot but, it’s an anime so of course, he doesn’t have much choice in the matter. The ship’s crew is compromised of all sorts of wonders and oddities including the overly enthusiastic yet slightly airheaded captain of the ship Yurika and the fan-favorite deadpan adolescent Ruri Hoshino, who won many a character popularity poll when the show was airing in Japan. They, along with the rest of the odd-ball crew, soar through space sometimes getting caught up in intergalactic warfare and at other points, often in service to Yurika’s puppy-like whimsy, entirely off where they’re not supposed to be. Robots, space, and a zany cast, this is what 90s anime was all about!

On the surface that sounds like a pretty standard summarization for a fun but otherwise typical science fiction anime, but keep in mind it’s supposed to. If it wasn’t already obvious the show was actively trying to incorporate many of the robot anime tropes and stereotypes, the inclusion of the in-universe Gekigangar III makes it apparent. Like Genshiken’s Kujibiki Unbalance, or maybe more aptly Watchmen’s Tales Of The Black Freighter, a good chunk of Martian Successor Nadesico just love watching the two-century-old classic Gekigangar! It itself a homage to classic 70s super robot anime like Getter Robo and Mazinger, Nadesico presents dual layers of satire to the then and (at its time) now of mecha anime with an extra dose of love. However what’s most interesting about Gekiganger III isn’t just that it exists but how much it gets woven into the show. 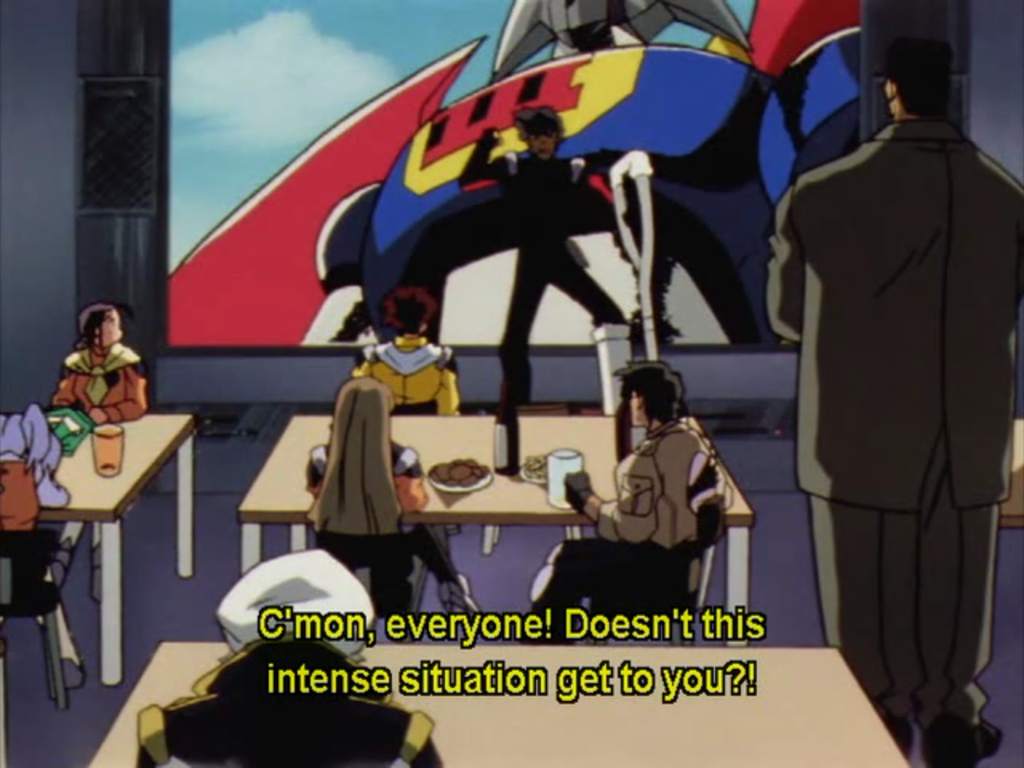 Let’s take Gai Daidoji for example, an over the top Kamina prototype whose most passionate about Gekigangar in the whole bunch. A fellow Nadesico mech pilot like Akito, the two begin to bond over their mutual love for this weird old show about people who do the exact same thing they do, just over-romanticized out of proportion. It would be like Heero Yuy and Duo Maxwell watching beat-up VHS tapes of the original Mobile Suit Gundam and exclaiming they wanted to be like Amuro and Char. That’s only the start for how this anime-in-anime incorporates itself into the larger picture but saying anything else would be a huge a spoiler. We’ll leave it by saying what Martian Successor Nadesico pulls off with Gekigangar is one of the most thematically interesting and emotionally satisfying acts of subversion we’ve ever seen in any show.

Unlike Evangelion though, which Nadesico came out only a year after, you wouldn’t call this anime a ‘deconstruction of mecha anime’, whatever that actually means anyway. Much more like Cabin In The Woods than Scary Movie 4, this series tells its honest and upfront story using a satirical edge without delving into parody for the sake of parody territory. With that satire streak being used as a conduit for genuine subversion and exploration as to what made robot anime so compelling and why the genre morphed from its romantic Super Robot roots to its Real Robot stories with genuine consequences, any fan looking for a deeper understanding of anime needs to dust this classic off. Not that this is the only reason to do so. 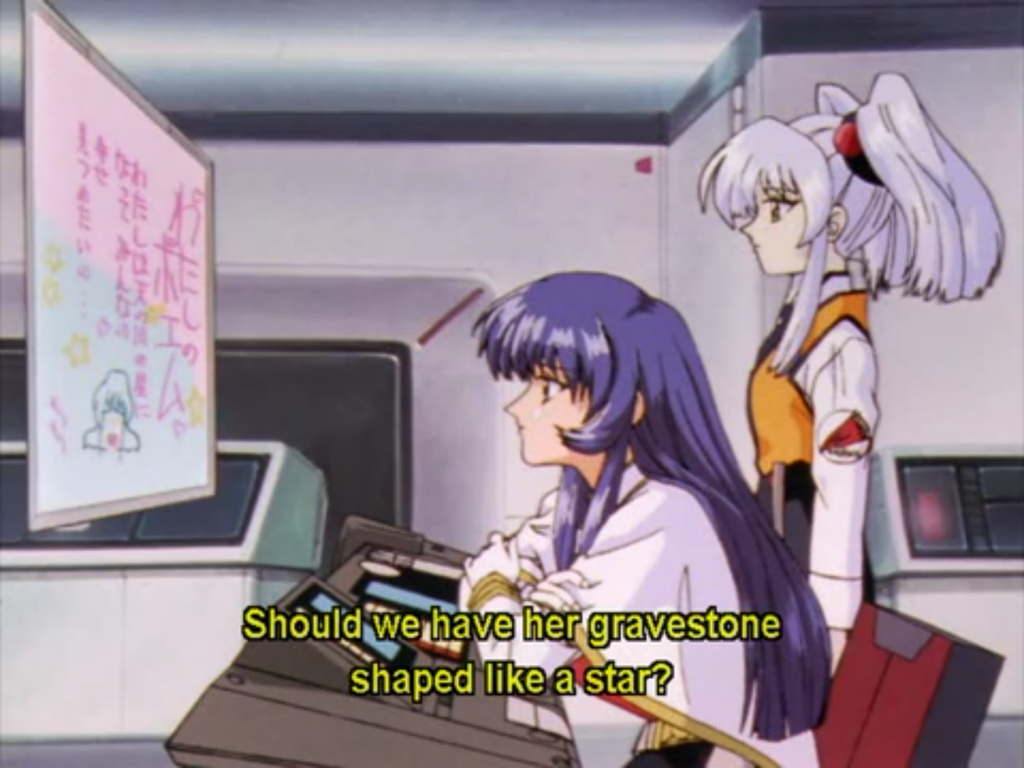 While the show’s love for Mecha / Sci-Fi anime and what it has to say about the genre is why you should watch it, the ‘meta’ elements aren’t the only reason to watch Martian Successor Nadesico. Even just taking the surface elements of the show into account, it’s a total knock-out. Each member of the crew carves out their own endearing personality, like Hikaru the part-time pilot part-time Dojinshi mangaka and the mechanic Uribatake who only joined the crew to avoid his family, and their entire cast dynamic is a riot! Despite being well over 20 years old, just about all the humor in Nadesico holds up, especially the quips from Ruri Hoshino. The show pulls off its genuinely heavier and emotional moments as well as it does everything else too, without indulging in its own sadness. Like in real life, when bad things happen the cast grieves and moves on, without ever quite forgetting.

Entirely original and well thought out from start to finish, we just don’t get anime like Martian Successor Nadesico anymore. Hard to know how director Tatsuo Satou pulled off the upfront charm of the show and all the meaty genre commentary underneath its skin, it being his first major directorial work. His Nadesico follow up film, and the only sequel to the series that isn’t an obscure Sega Saturn or Sega Dreamcast game, The Prince Of Darkness is extremely diverse to fans, but we think it’s actually in keeping with the show’s meta inquisitive nature while throwing everything on its head. It’s conceptual and charming shows like this that keep fans endeared to the anime medium, and we wish we would see more like them made today.

You can watch Martian Successor Nadesico on Crunchyroll and Youtube!