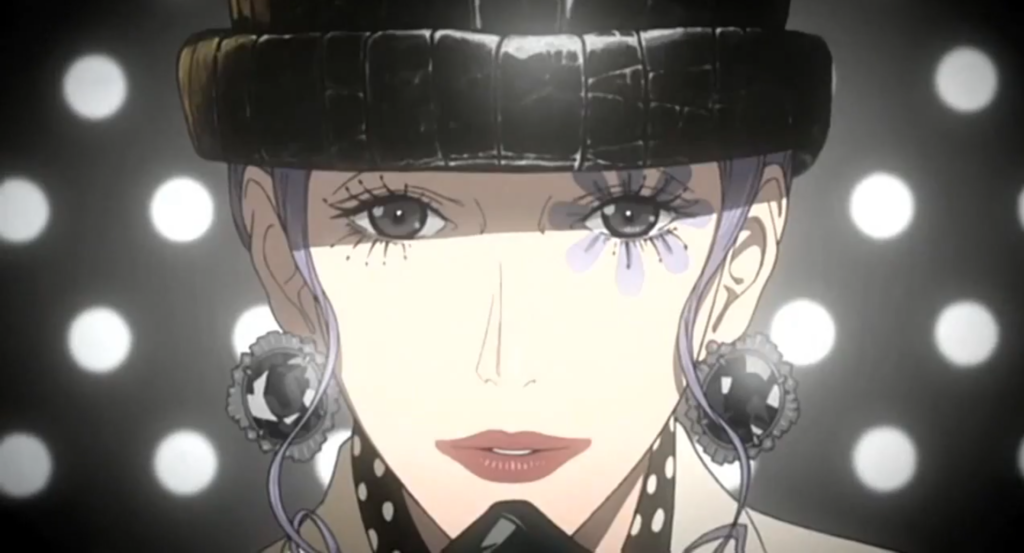 When it comes to Paradise Kiss, the manga is certainly the most remembered iteration of the series. That’s totally understandable! Manga artist Ai Yazawa is a genuine master of her is craft and few comics are as gorgeous as Parakiss is to this day. Huge in Japan of course and an early Tokyopop release stateside, if you read girls comics in the early 2000s there’s no way you weren’t at least aware of it. However! Yazawa was working on it and the best selling Nana at the same time though and while Paradise Kiss got the visual mastery, it’s our honest belief Nana got the better writing, and sales numbers reflect on it being the stronger work overall. That’s one reason why the Paradise Kiss anime is such a treasure; It was able to present Ai Yazawa’s story exactly as she ever wrote it, but with some additional nuance and depth that elevated the already great source material into something even more profound. Only on very rare occasion does an Anime surpass its original manga, but 15 years later we still hold this possibly controversial opinion.

The Legacies Of Paradise Kiss and Noitamina 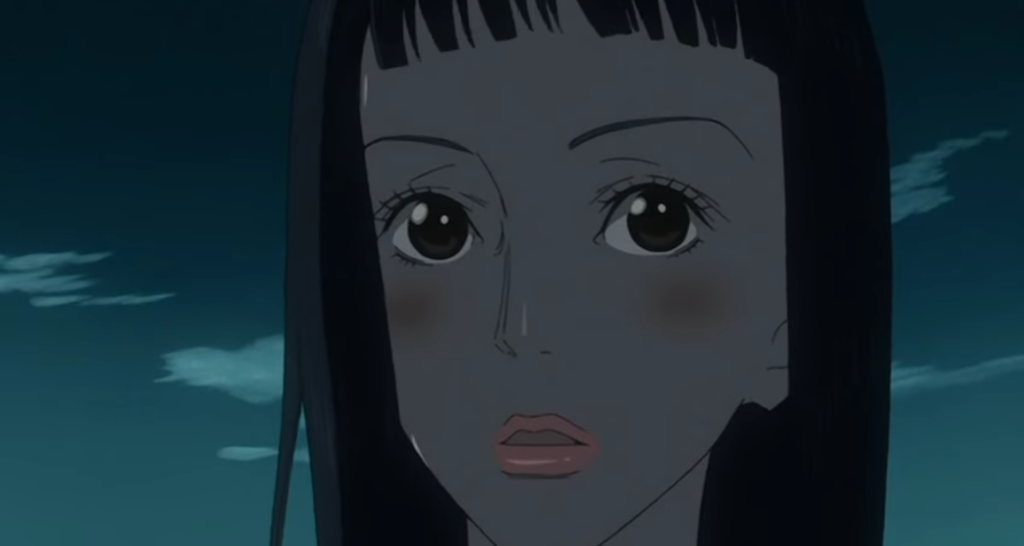 Yukari Hayasaka is your perfect scholarly high school student who would never do anything to disappoint her overbearing mother and is beginning to prepare for the hellish Japanese college entrance exams. Unfortunately for Momma Hayasaka, Yukari meets a group of miscreant young clothing designers who wish for her to sin in the form of her being their model. Of course, the actual risk comes in the form of her getting romantically involved with the handsome and enigmatic group leader George who’ll quickly become an unforgettable character in her life, for better or worse. Would be a generic premise, but what separated Ai Yazawa’s Paradise Kiss from the thousands of other girls comics was its willingness to portray being young and in love as an often painful and idiotic thing to do. Bordering on a Shojo and Josei cusp, Yazawa successfully portrayed the experience of the former with the perspective of the latter with beautiful inksmanship to boot.

The Fuji TV Niotamina animation block very thankfully continues to this day being, perhaps, the most reliable purveyor of actually interesting anime that buck the mold like Psycho-Pass and Erased, just to name a few. Launching 15 years ago with the purposeful aim of only putting out unique content, the Madhouse animated Paradise Kiss anime adaptation was the only the second show to ever premiere on its block! The first was fellow not quite shojo not quite josei Honey & Clover, which made Parakiss a perfect fit for the block’s newly established tone. What was unique about Paradise Kiss even getting adapted was that the series had wrapped up a whole two years earlier and, while in the grand scheme that’s not a huge amount of time. it was rare at the time for an ‘older’ title to get adapted, especially something as risque as this. Noitamina and Yazawa took chances gambling on each other, but their efforts were well worth the risk.

What The Underappreciated Osamu Kobayashi Brings To The Table. 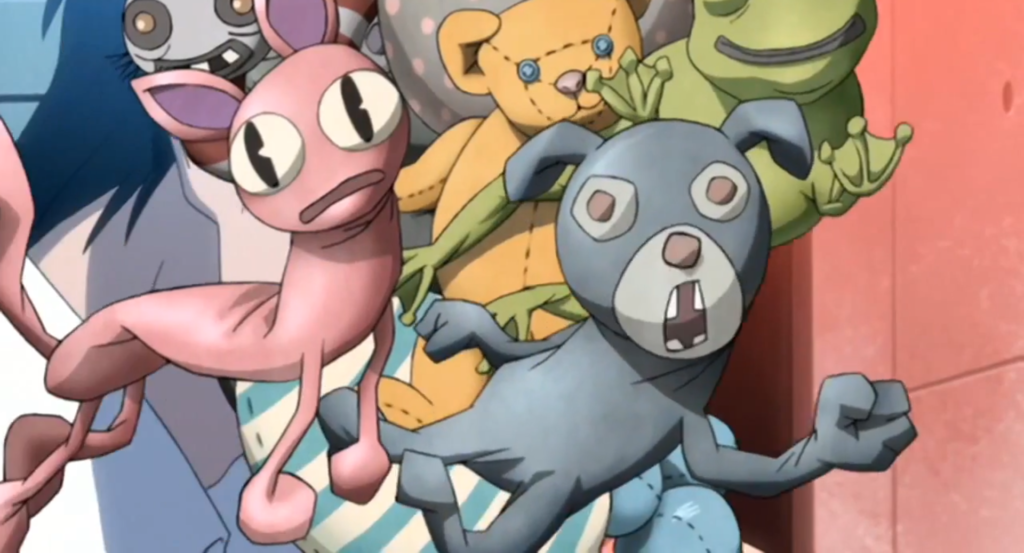 If you’ve only ever read Ai Yazawa’s original Paradise Kiss, you might be wondering why there’s a screenshot of a bunch of little ugly animal guys. No, the Parakiss anime didn’t add an out place monster collecting element. These guys only show up on occasion as a screen-wipe to transition from one scene to the next; a little visual kiss from the absolute auteur director Osamu Kobayashi. Unfortunately, the man hasn’t gotten to helm a series since the second Someday’s Dreamers entry in 2008 and that’s a real tragedy. Also sad, he might be best known amongst fans as large as ‘the guy who screwed up that one episode of Gurren Lagann. you know the one.’ His penchant for the real and the gritty doesn’t sit well with every anime fan, often directly polarizing to the escapism the medium provides to us all. His unique direction may have worked for a series like Beck, whose original manga was already down to earth and ‘ugly’, but how was the visually and atmospherically harsh Osamu Kobayashi touch going to work for a classic Shojo manga? This genre, known for its sparkly eyes and naive gush.

Turns out that the Osamu Kobayashi anti-charm was one of the only things that could have made Paradise Kiss better than it always was. Keep in mind that Ai Yazawa is one of the greatest of all time and that Parakiss was never your generic mushy highschool pulp. Sure all the characters are beautiful and love plays center stage, but the comic always presented the ugly downsides of love as they were, without shojo sugar sparkle. Kobayashi extends that concept of marrying the beautiful and the ugly to the entire show; Our modelesque cast, their delicate feelings, the dreamlike fashion, it’s all juxtaposed with this very realistic, purposefully ordinary and bland world. George, Isabella, and the rest create everything appealing about Paradise Kiss, the art and the love, through their own action; They are the only color of this story, and it’s incredibly fitting. As Kobayashi places the viewer in a world much like their own, we all get to experience this special, beautiful, and fleeting world of fashion and passion with the same eyes as Yukari herself.

A One Of A Kind Soundtrack WithTommyFeburary6, The Babys, and… *that* Franz Ferdinand 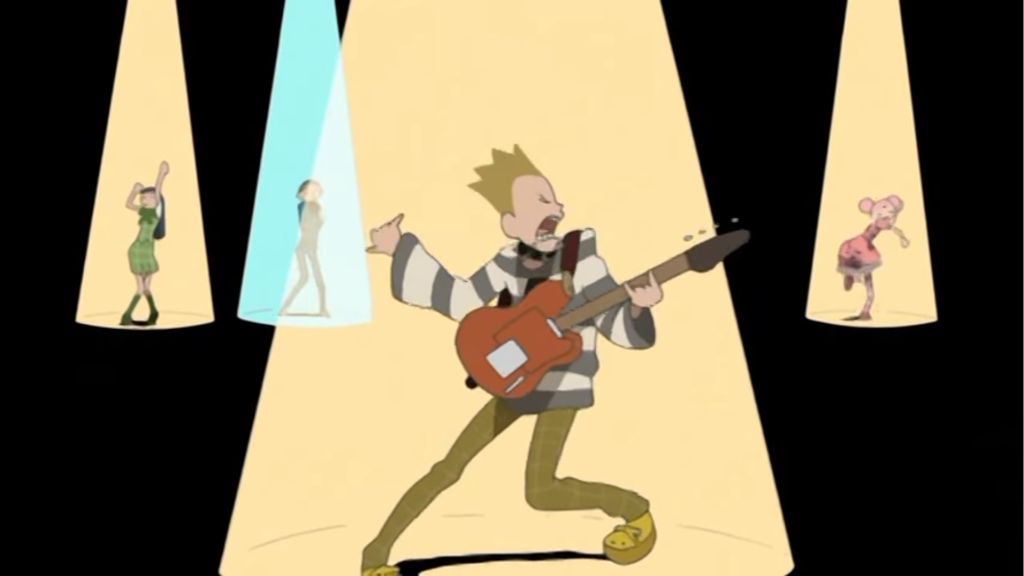 We’d be remiss if in an article discussing why Paradise Kiss should be watched, both in general and instead of being read, if we didn’t talk about all the excellent music sewed into this series. Fresh off helming Beck, arguably the greatest music anime of them all, as stated Osamu Kobayashi knows his way around soundtracking a show and picking particularly excellent music to do so with. An unforgettable 80s synthpop throwback, each gripping episode of Parakiss starts off with the candy-coated yet subtly melancholic ‘Lonely In Gorgeous’ by TommyHeavenly6 side project TommyFebruary6. It was an instant classic; immediately memorable and stage setting with no other anime tune sounding like it. For the ending? Kobayashi straight up plucked the Franz Ferdinand hit ‘Do You Want To’ which, set to his more abstract style of animation, was a perfect finish for each episode.

With an absolutely unique opening and ending combo, Paradise Kiss couldn’t just have a normal soundtrack, could it? Even if one of the director’s specialties was tieing music into anime how could he top the ritual OP and ED this time around? Thankfully Shunsuke Mizutani, the voice actor for guitar playing hooligan Arashi, happened to have a band called The Babys active in 2005 when Parakiss came out that was ripe for the plucking. On paper that sounds lazy but, despite having a short lifespan, The Babys were actually great. Like, their one album and two mini-CD discography was roughly on par with anything The Pillows, Asian Kung-Fu Generation, or Radwimps have ever done. Standard JRock fare imbued with some classic guitar rock energy and sharpened with a punkier edge, Mizutani’s charisma makes The Baby’s small collection of songs horrifically addicting. Fast and a little dirty, having these bits and pieces scattered throughout the anime really helped to solidify that independent identity for itself separate from the manga.

We’re Begging For The Paradise Kiss Anime To Be Remembered 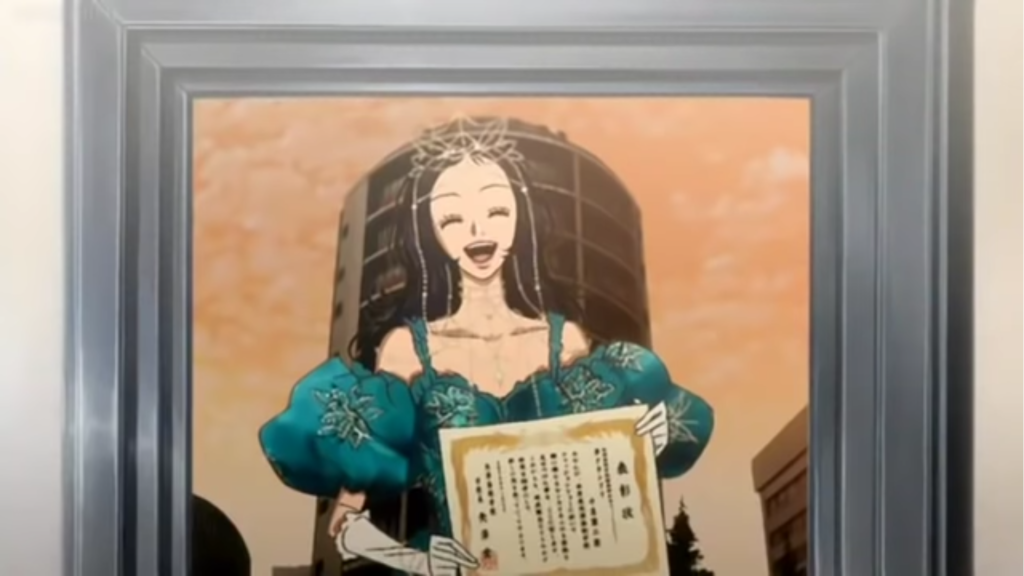 A new English edition of the Paradise Kiss manga, the third in The United States, released just under a year ago. Japan has seen new clothing based around Paradise Kiss’s parent series Gokinjo Monogatari within the last year as well. It’s clear Ai Yazawa’s Parakiss remains in the hearts of its fans to this day. As said the original manga has always been the definitive work in the franchise and while that’s to be expected, it’s a real shame the anime’s nowhere to be found on either side of the pacific. Previously licensed twice in the united states, by the now-defunct American arm of Geneon and then Funimation, it’s now completely out of print with no legal streaming option anywhere. While it’s a little younger than their usual fare, we’re praying Discotek who did rescue its contemporary Niotamina predecessor Honey & Clover to put this incredible show back into circulation. A big ask, but if this article gets at least one or two of you to seek this out, we’ll be glad to have done right by this underappreciated anime adaptation.