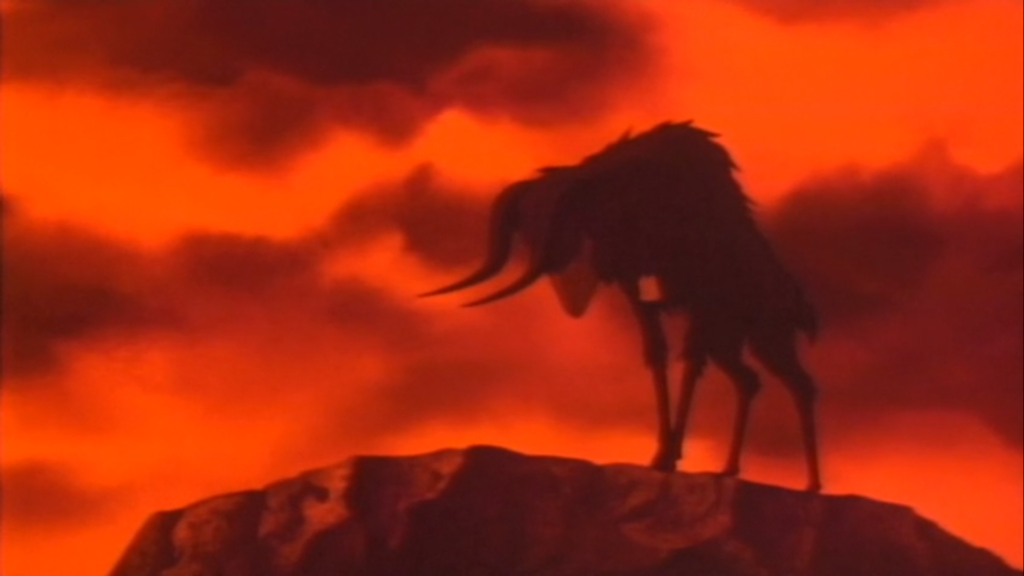 The vengeful and spiteful often turn into the very things they seek to destroy. They pay no mind to the expression ‘Holding onto anger is like drinking poison and expecting the other person to die,’ and go straight for whatever option justifies their twisted sense of justice. Revenge has long been a favorite subject among storytellers and occupies many classic works. And with Ringing Bell (Chirin no Suzu), its ominous presence lurks in practically every scene.

The short film is less of a children’s fable and more of a ghost story that reads like tragedy. Chirin the lamb starts out living the idyllic life, eating grass and playing with the other lambs in the emerald-green pastures. All of that comes to a screeching halt when the wolf Woe swoops down from the mountain to devour as many sheep as he possibly can, including Chirin’s dear mother. This incident destroys Chirin’s sense of innocence as he declares revenge and decides to become as strong and powerful as Woe. He travels to the mountain and trains with his enemy, not letting Woe know his true intentions: that he plans to kill him when he finally reaches his potential. 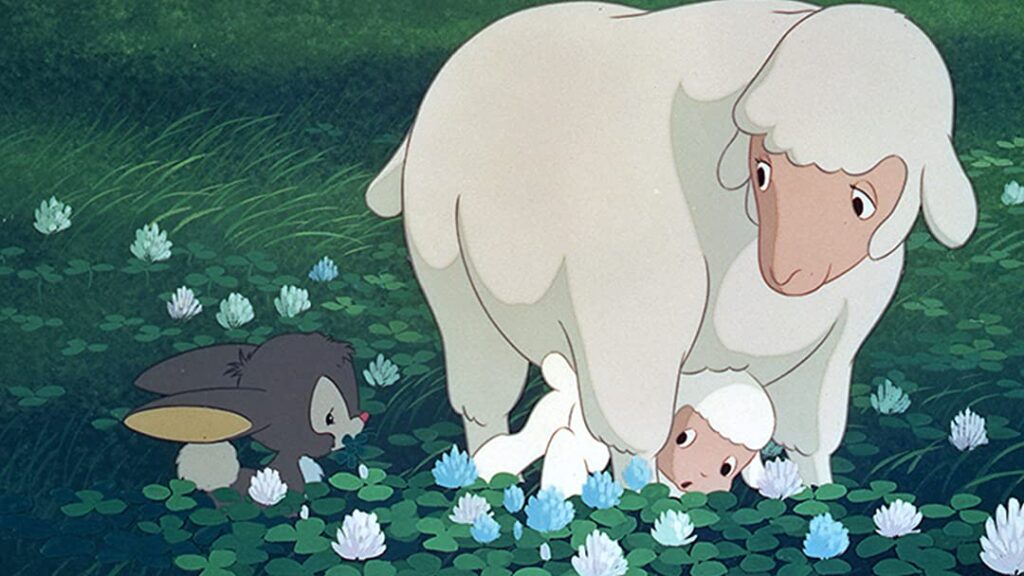 A scene that best represents Ringing Bell’s theme of revenge and its consequences is the training montage between Chirin and Woe. This comes towards the end of the movie’s second act, where we see Chirin’s transformation from vulnerable lamb to killing machine. It is with this that Chirin earns a reputation as a bloodthirsty killer. In a lot of movies and anime, training sequences are supposed to inspire hope and empowerment. In Ringing Bell, it only inspires fear and pity. Chirin’s monstrous metamorphosis is a telltale sign that things can only end tragically. And they do.

Ringing Bell was released in 1978 by Sanrio, and is the most mature thing they had made until Aggretsuko four decades later. It’s also the dreariest thing we’ve ever seen by them. Forty-two years after its release, it still comes off as a shock that the Hello Kitty people could whip up something this bleak and have the gall to label it as children’s entertainment. Online Internet forums have created the myth that it was banned in some countries for its violent imagery, and while that rumor has remained unsubstantiated, it’s understandable why people would believe it. One quick cursory glance at the movie indicates that its fluffy poster is a bait-and-switch for something guaranteed to induce childhood trauma. 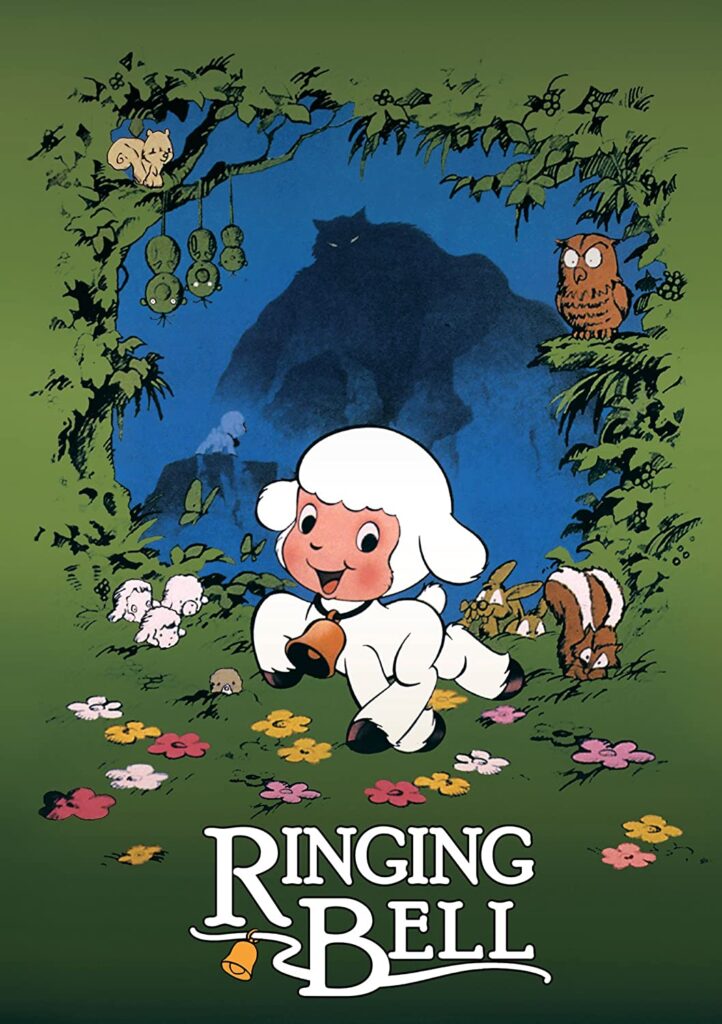 The movie was based on the picture book by Takashi Yanase, famous for his Anpanman children’s superhero book series. Yanase’s story was definitely a dark turn for him, but paled in comparison to its eventual anime adaptation. What was just a series of minimalist sketches hung together by a simple but brooding plot was transformed from the inside-out into something leagues more demented than Yanase ever intended. The scenery and animation look like the more haunting scenes from old Disney movies, but cranked up to a psychotic eleven. Chirin and Woe’s character arcs are more melancholy than their literary counterparts, and look way grizzlier and demented too. On top of that, the film score sounds like a funeral dirge, adding plenty of emotional weight to the film’s tragedy.

Coincidentally enough, the film was directed by Masami Hata, whose previous work was with family-friendly fare like an episode of Princess Knight and a series based on Hans Christen Andersen’s stories. I guess maybe he needed a break from fairy tales with happy endings and saw an opportunity to unleash his inner edgelord with Ringing Bell. Whatever the reason may be, it works. 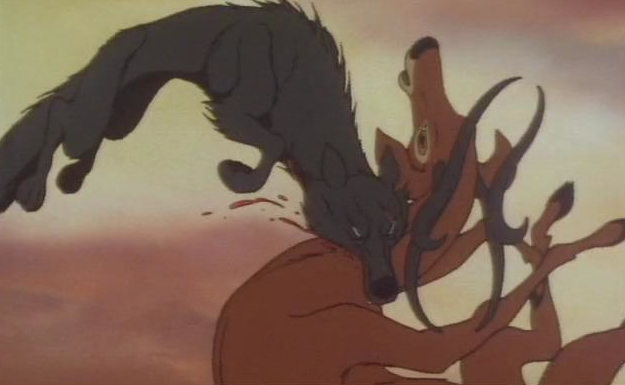 The logic of Ringing Bell is flawed. In order to stop being a victim, Chirin forces himself to train alongside the same creature that victimized him. It would be like if I learned to box from the same bully who punched me in the face back in high school. But that’s something I can easily overlook. The chemistry between Woe and Chirin is tight enough and provides a great yin-yang dynamic between the terrifyingly strong and the sheepishly weak. To me, it’s the movie’s biggest highlight. It’s something that pays off when Chirin morphs into beast mode. The final ten minutes of the movie show that we’ve really come a long way since the movie’s start. Whatever physical and mental differences previously existed between Chirin and Woe no longer exist. They may as well be the same character at this point.

But this still begs the question: Why Ringing Bell after all this time? Besides it being an interesting piece of anime history, it’s a huge shock-and-awe-fest that never feels overbearing. Something more modern like Elfen Lied might be nostalgic for millennials who snuck late-night viewings away from their parents when they were teenagers. As someone who didn’t watch it until later in life, it didn’t do much for me. It was a clumsy usage of excessive violence just for the sake of it, and its heavy-handed misanthropic themes only served as fodder for teenagers wanting to make Evanescence AMVs. This is not horror. It is unintentional comedy. 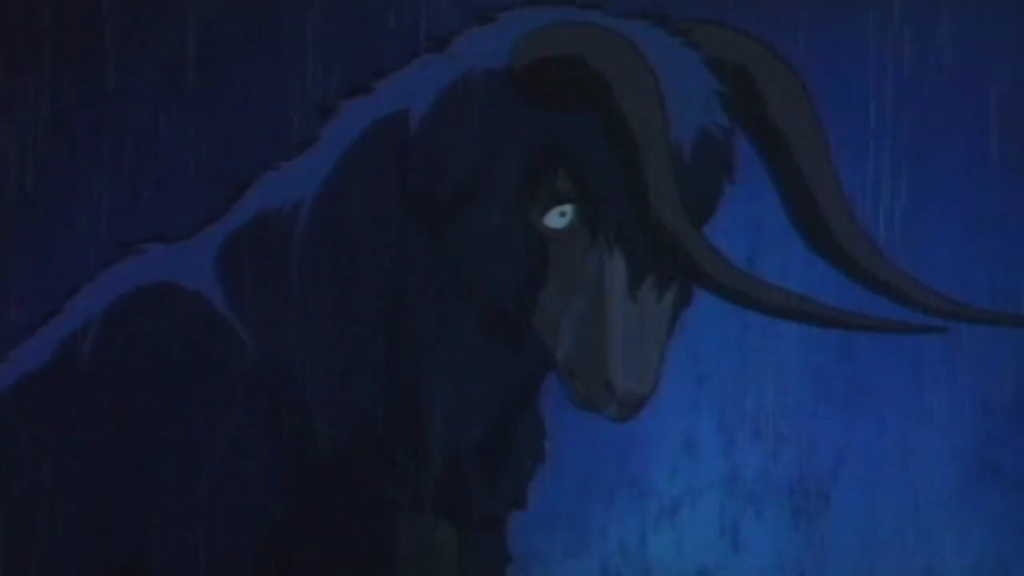 Ringing Bell, despite its reputation, serves up its shock with surprising grace. Yes, it does play up its vulgar displays of violence, but it’s never over-reliant on them. The film knows true terror comes within the psychology of its characters and not spectacle alone. It isn’t shocking that we see violence in what’s supposed to be a children’s film. It’s shocking that such a youth like Chirin would unflinchingly consider violence to begin with. Chirin’s initial training with Woe has him getting constantly pulverized, with a few near-death experiences peppered into the mix. When Chirin finally transforms into a monster, it rings out as a sad affirmation of innocence lost. Here is a child who has sold his soul so early in his life, and it’s a decision that will haunt him forever.

Ringing Bell has long existed as a cult favorite in Japan and even had its own museum exhibit in 2015. However, it has remained a relatively obscure gem elsewhere. An English dub hit the West in 1990, and you can watch it for free here. Interest in the film would linger within hardcore otaku circles and allow both the film and the legend surrounding it to live on. Discotek would release it on DVD in 2014, and Crunchyroll would put it on their website for streaming in 2016. In other words, Ringing Bell has risen from the grave like the undead. If that factoid doesn’t scream horror show, I don’t know what does.