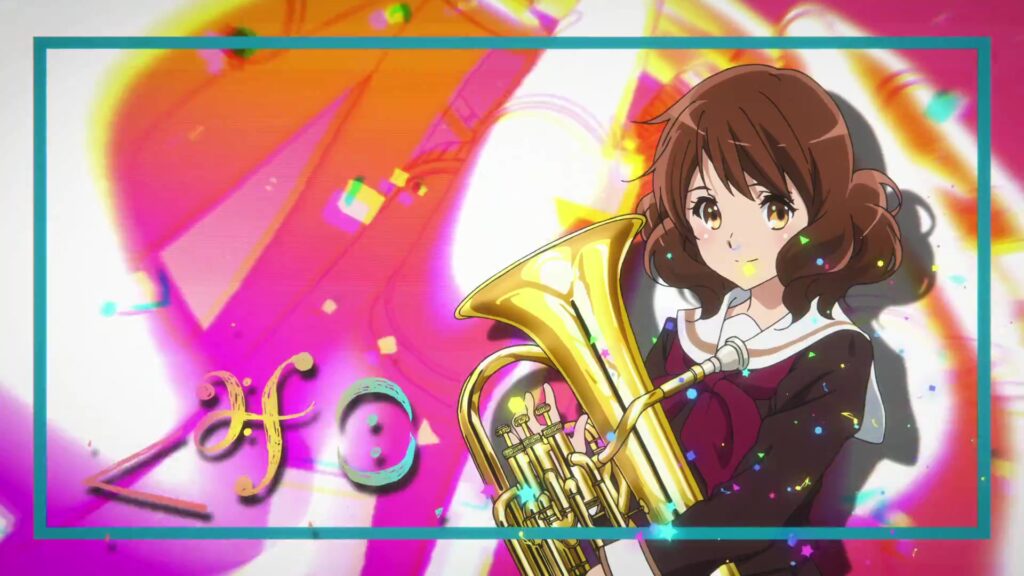 Nothing is as it seems. You can’t just shoot a quick glance at something and think you’ve summed it up. There’s always something deep and buried underneath every image, every veil, every face you’ll come across. The theme of facades is something that runs deep within the groove of Sound! Euphonium’s (Hibike! Euphonium) two seasons. It’s also reflective of the reactions I’ve seen from unsuspecting people watching clips of Euphonium out of context. After watching a few minutes of Euphonium, a friend of mine asked me, ‘What is this you’re showing me, magical tuba girls?’ I laughed and smiled back. ‘I’m sorry you don’t understand Shakespeare.’ I was only half-joking.

Released in 2015, Sound! Euphonium is a music anime that is not about the music itself, but about how an aspiring musician sheds her anxieties and becomes aware of the world that surrounds her. It’s easy to miss this at first; the anime initially seems like an archetypal fluffy slice of life story about a high school concert band coupled with the same cliched storyline of underdogs aspiring for greatness that everything from Gurren Lagann to Rocky to your high school principal have covered ad nauseam. It’s not until later on that we learn things are much, much more serious than that. 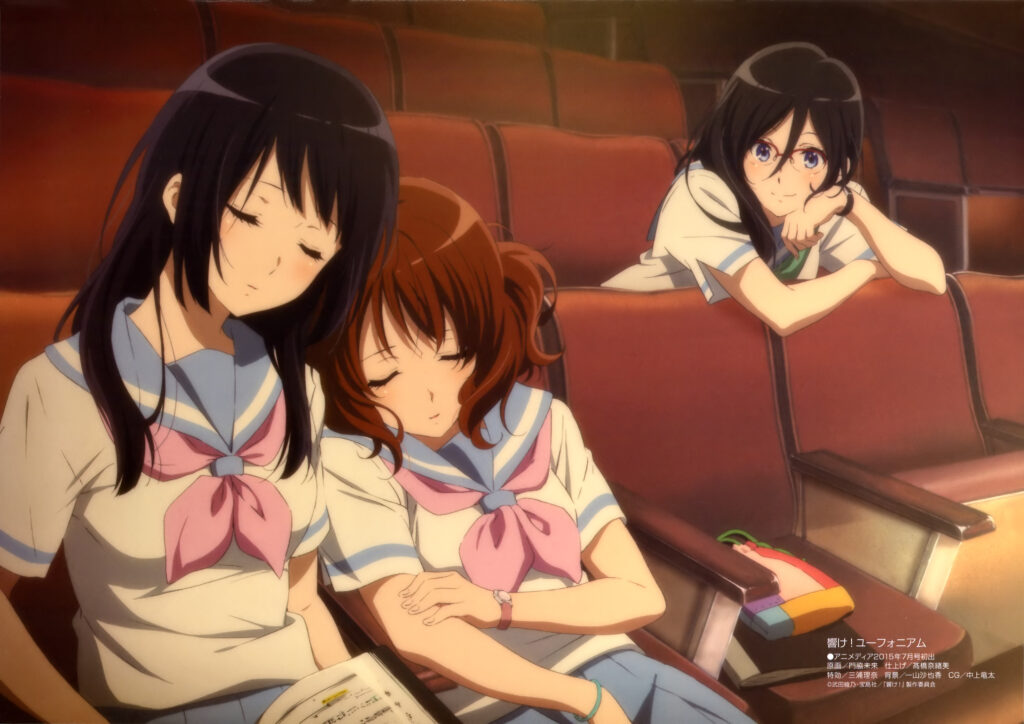 At Euphonium’s onset, our protagonist Kumiko Oumae is just an ordinary girl endowed with extraordinary apathy. When her middle school band loses the big competition, Kumiko shrugs it off as no big deal. Her fellow bandmate Reina is devastated and bursts into tears, to which Kumiko tries to console her by saying, ‘Did you really think we could make it to nationals?’ By her apathetic acceptance of the loss, it’s obvious that Kumiko was never given a reason to feel special, which resulted in a mindset of what’s the point of even trying. Her nonchalant attitude gives new meaning to the Kurt Cobain lyric from ‘Smells Like Teen Spirit’: it’s fun to lose and to pretend.

A few months pass and Kumiko enters her freshman year of high school, only to reluctantly get shanghai’d into her band. It is at band practice where Kumiko’s defining trait becomes evident: her awkward behavior. She doesn’t know how to properly strike up conversations. She panics easily. She blurts things out without thinking. Sometimes, Kumiko’s only means of understanding people comes from silently observing others’ conversations and meltdowns. Her inability to be conscious and learn from others serves as obstacles that Kumiko must overcome. 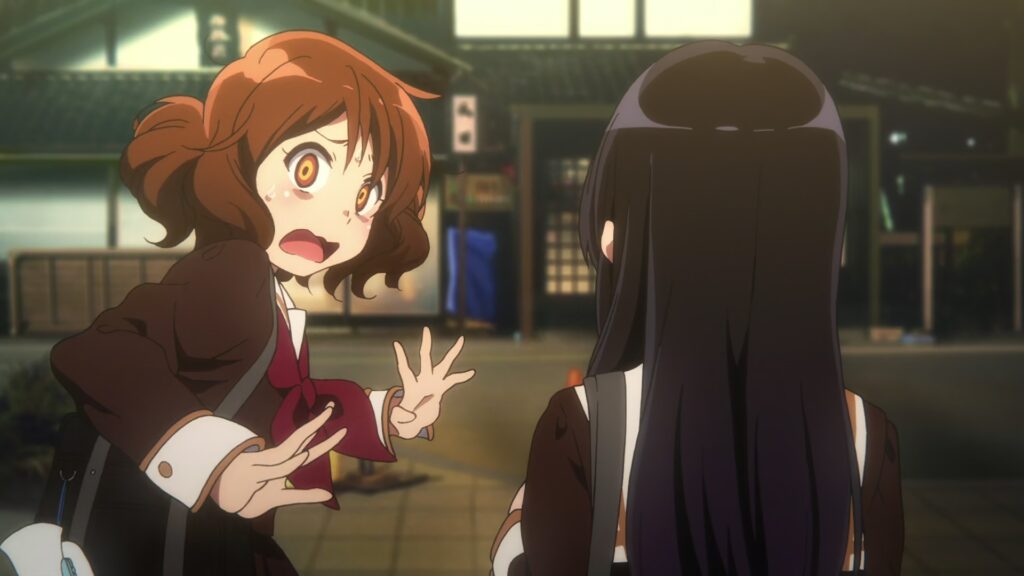 In the book Anime Impact, the Pedantic Romantic described Euphonium as a show of ‘insincerity, deception, and partial truths.’ Indeed, many of the show’s characters hide their true feelings from Kumiko throughout the series, and these hardened exteriors also become obstacles for Kumiko. Asuka, with her upbeat personality and domineering attitude, seems to be the biggest puzzle of them all. After a blunt conversation between Kumiko and Asuka in episode 10 of season one, Kumiko questions Asuka’s honesty when she says to herself, ‘I didn’t know if she meant it, or if it was a facade. Asuka’s mask was too thick to see through. There was no way I could peel it off.’

Euphonium has so much going on that it becomes more than your standard coming of age story. You don’t have to be a high schooler to relate to Kumiko’s journey of self-growth. Getting to know people and all of their joys and pains is a universal theme that transcends your teenage years. Every day, you surround yourself with people you think you’ve come to know – friends, family, co-workers – only to realize you don’t really know them or what makes them tick. Likewise, most of us go through life without any deep understanding of ourselves. 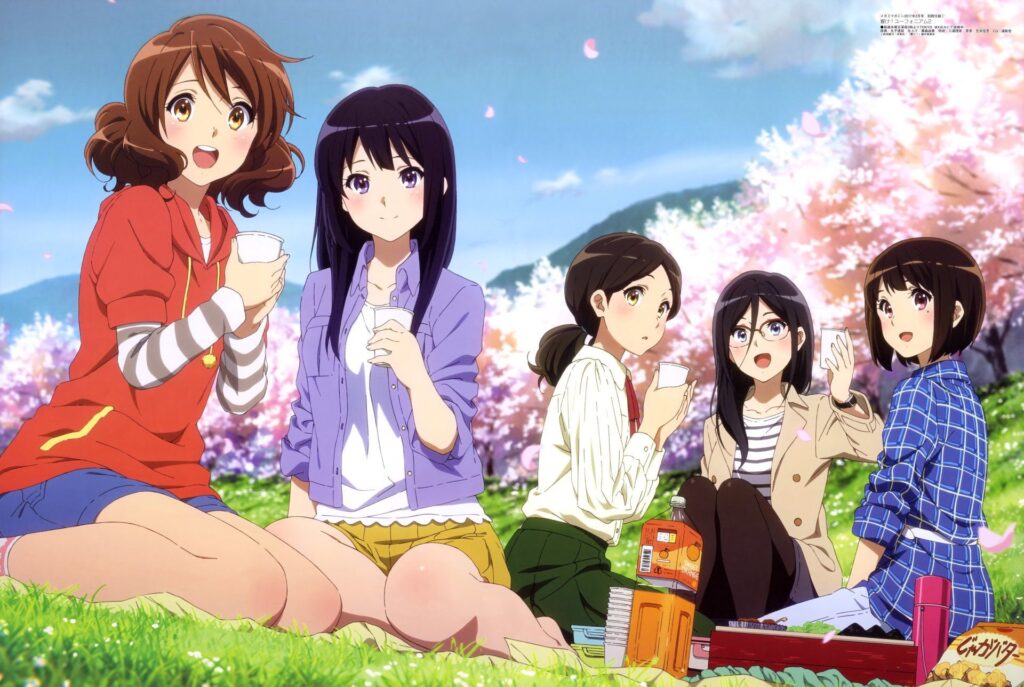 I’m sure many of us have been, at some point, aimless in our life’s pursuits. For me, it was abandoning my guitar to gather dust in a corner of my bedroom because I couldn’t make that dreadful F chord. Maybe for you, it was being stuck at your 9-to-5 job trying to find ways to make each working day meaningful. Or you joined your local volunteer group in the hopes that it would draw you closer to your community. Whatever the reason, Sound! Euphonium makes very, very real the desire to learn from others and improve ourselves. It’s hard not to see myself and others in the way Kumiko strives to improve herself. Her aimlessness is our own.

Sound! Euphonium is very unabashed in its display of emotions and isn’t afraid to be upfront and personal at times. What’s surprising is how it occasionally weaves the theme of death into the narrative. It all starts when a tearful Reina shouts, ‘I’m so upset I could die’ after losing the band’s competition at the beginning of the show. The phrase is said a few times later on, leaving a profound impact each time it’s said. This is especially true when we learn that a certain character’s love of music was inspired by the tragic loss of their beloved. Perhaps death is ever present in Euphonium to remind us that our dreams and feelings inspire purpose in life, and should we let them die, hope dies with them. 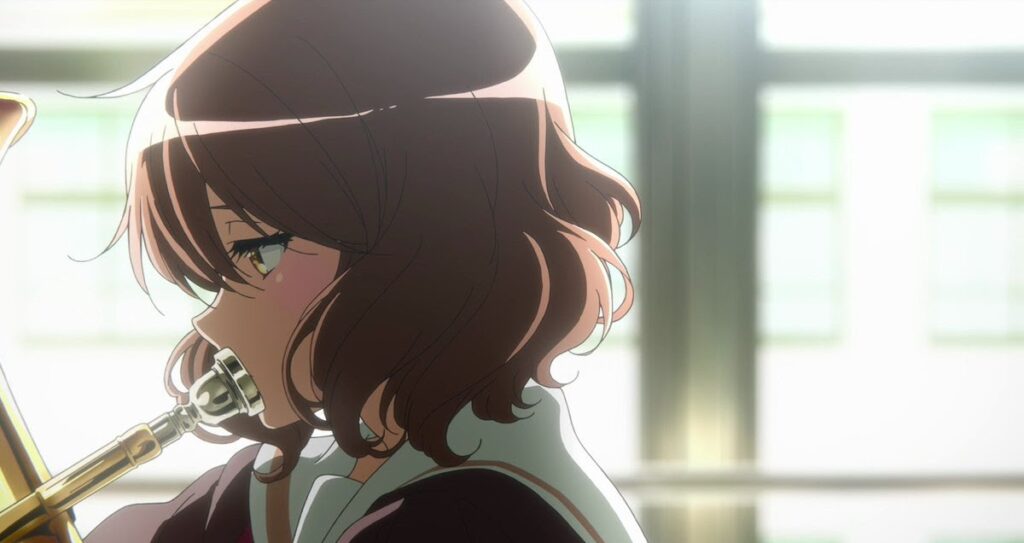 Euphonium’s story and motifs are beautifully juxtaposed with the show’s high-level production, which sees Kyoto Animation on their A game. Of course, this is to be expected with KyoAni’s wonderchild Tatsuya Ishihara at the helm and Naoka Yamada assisting with direction. Having respectively done Haruhi Suzumiya and K-On!, these two are no strangers to the ‘cute girls doing cute after-school activities’ genre of anime. Euphonium finds Ishihara and Yamada at the top of their game. Together they weave a tightly woven story chock full of gorgeous animation that never gets dull for a single moment.

To say the show is eye candy is to understate its power and depth. Every frame of the series shines with cinematic flair and superb attention to detail that you don’t often see in television anime. The color palette flows with a delicate crispness that effectively highlights the mood. Certain directorial choices help punctuate things further, such as focusing on how a characters’ tight shoes gnaw away at her ankles in order to show her toughened attitude. Even the most miniscule things like a character’s hair falling into place is done with meticulous craftsmanship. ‘In particular with this work, I wanted to go in a realistic direction,’ Ishihara stated in an interview with Animestyle 007. ‘Since I wanted it to be a real high school drama, I felt that we should create imagery that thoroughly felt that same kind of realism.’

This heightened attention to detail reaches a crescendo during the musical sequences. Despite the fact that most everyone is shown seated while playing their instruments, there is an impassioned energy to these sequences. Many of the concert scenes required the Kyoto Animation to carefully study certain songs’ musical qualities. They even recorded a university’s wind ensemble performance, placing cameras at strategic angles to record mouth and hand movements in order to properly animate them. The final result is a visual drama that is as explosive as a mecha anime. Whoever said that slice of life was boring? 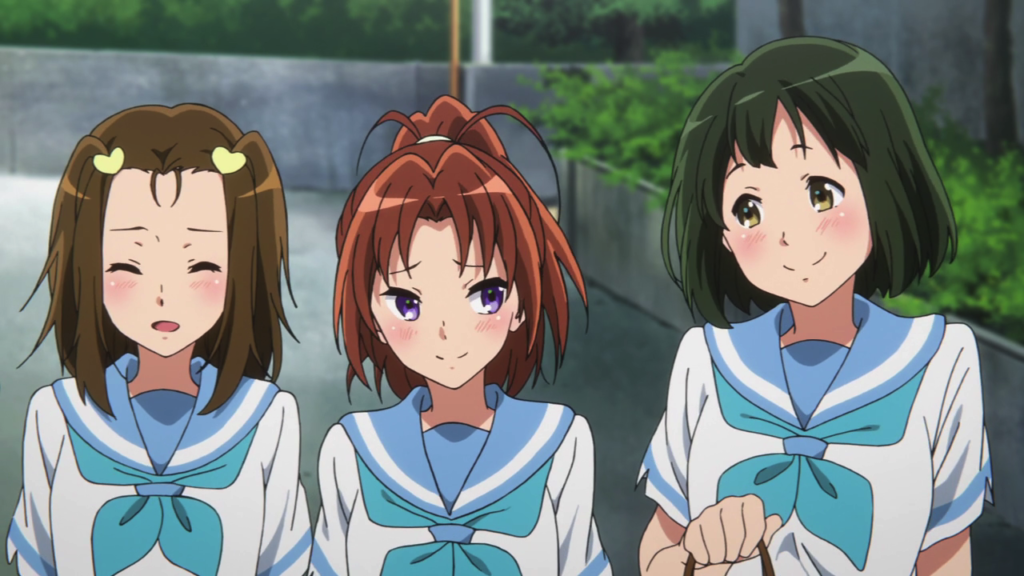 The original light novels were written by Ayano Takeda, who wanted to write about wind music after writing her first work, We Breathed Together Today. Having experience in music herself, Takeda chose the euphonium instead of a more well-known instrument like the trumpet. ‘In order for them to understand ‘this author knows music,’ Takada would say, ‘I think using the euphonium as an instrument was very effective. If I didn’t have a history as a musician, then there are many other instruments that someone who didn’t know music would’ve picked.’

Like Kumiko understands herself through her peers’ conversations, I have taken the time to understand Euphonium through others’ conversations as well. Anime YouTube immediately comes to mind here. I’ve already mentioned the Pedantic Romantic, but there are others. KyoAni mega-fans like Under the Scope and Kevin Nyaa have made wonderful videos about Euphonium. However, there is one insanely underrated video that stands out, and it’s one by Subtitled Anime.

In his video, Subtitled Anime notes the usage of the old tune ‘Orpheus in the Underworld’ and compares the story of Sound! Euphonium to the Orpheus myth with impeccable precision: ‘Kumiko is Orpheus, and much of Euphonium is about her begrudging journey to Hell: band.’

He goes on from there: ‘For Kumiko, the plunge into band is something she resists. Throughout the first episode, she’s constantly wavering over this decision. It’s during her most intimate wavering where the song [‘Orpheus in the Underworld’] is first played… she looks up to the ceiling for answers as if she’s already in the bowels of Hell. She is trapped by her apathy and is a prisoner to music.’

You might find it a bit out there to compare a high school drama to an ancient Greek myth, and it is. But then again, isn’t daring to see beyond the surface of things the most Sound! Euphonium thing to do? The manner in which Subtitled Anime expresses his ideas sum up what the show is about: that Kumiko should never be so disconnected from herself and take things at face value. And for that matter, neither should we.