Why You Should Watch Squid Girl: My First Slice of Life — OTAQUEST Selects #47

We all have that one special anime that brings to mind a special place in time, and Squid Girl is that for me. It was one of my first ‘cute girls doing cute things’ anime, and I stumbled across it as the second season aired during my freshman year of college. I went to a big football school, and even though I loved partying (still do), I wasn’t into sports. Pressure was put on me to do so, but I just never conceded. I turned to anime, yet despite knowing that Sailor Moon was a thing, an inexperienced young me still thought anime was confined to machismo dramas like Yu Yu Hakusho and Dragon Ball Z. When my friends tried showing me Squid Girl, I was initially hesitant and thought the idea of me liking what I pejoratively called ‘kawaii-desu-nyaa’ anime was out of the question. The next thing I knew, I was thrust headfirst down the moe rabbit hole.

Squid Girl’s titular main character is on a quest to enslave humans for polluting the ocean, but she is far from a feared leviathan of the deep. Her entrance is marked by her standing on top of a cafe table in a stance of false authority. She is unaware of how non-threatening she appears to the cafe’s patrons, and it’s punctuated by the earnestness in her voice when she shouts her plans for world domination. It’s this naivety that makes Squid Girl such an endearing character. Whenever we see Squid Girl get giddy over the idea of conquering humanity, it’s never with a face that implies malicious intent. Instead, it’s with a big goofy grin that brings out her moe characteristics, and one we can never take seriously. 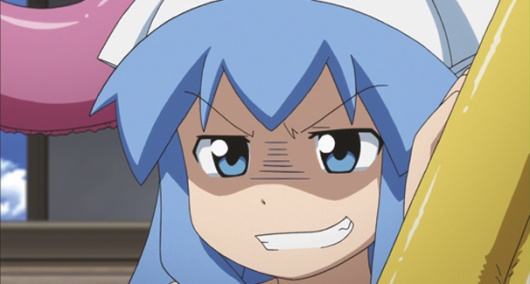 None of Squid Girl’s attempts at world domination ever work. She tries to contaminate everything with squid ink. She tries to ‘brainwash’ school students. Yet she isn’t experienced enough as a landlubber to distinguish the difference between real killer whales and plastic beach toy replicas. But for some reason that is beyond her, she is good at practically everything else: she is a genius mathematician, makes excellent spaghetti, and even performs drum solos that would make Mike Portnoy tip his hat. This irony has a comedic weight to it that lends its way to a lot of great gags.

The anime’s first season came out in the Fall 2010 season, yet I can’t think of an anime more suited for a summer release. This is naturally the case when your setting is a beachside cafe, which means only one thing: every episode is the beach episode. The one that occupies this show is a crowded lively one with skies that gleam with a cerulean hue reflective of its oceans. Surfers catch some waves, lifeguards monitor everything from their tall seats, and the children become bewildered by Squid Girl’s sand castles, which they insist look like turds. The beach is such an inseparable part of Squid Girl’s narrative, although the show finds time to explore outside of its sandy territory. A particular scene early on where Squid Girl and her fellow beachgoers visit a haunted graveyard at night is one of the series’ best, effectively using its location as it does.

Of course, Squid Girl is a slice of life, but I didn’t think of it that way when I first watched it. I still don’t. In my mind, Squid Girl is less like Azumanga Daioh and more like a less-cynical Invader Zim. I know it’s a stretch to compare the two, especially when the directly Zim-inspired Panty & Stocking with Garterbelt aired that very same season. It’s insane that I see similarities between Zim and Squiddie, but I do.

Humor me though. Both Squid Girl and Zim are invaders from another dimension but do not have the competence to follow through with their plans. Immediately after they crash land into foreign territory, they are subjected to live and work within the very system they are trying to conquer: Squid Girl becomes an assistant at a kitschy little seaside cafe, Zim becomes a student in a dilapidated horrorshow of a school. A team of MIT scientists develop a fascination with Squid Girl and want to experiment on her, the paranoid computer addict Dib develops antagonism towards Zim and wants to capture him in the act. And so on.

Squid Girl and Invader Zim are at opposite ends of the humor spectrum: the former is light-hearted and slapstick while the latter is cynical and absurdly satirical. Squid Girl being the opposite in tone is what works for me; it’s nice to see an iteration of a failed invasion presented as something fun and almost welcoming. 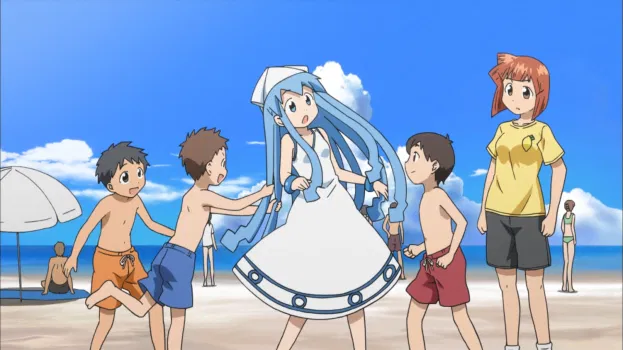 Squid Girl’s catchphrases ‘-ika’ and ‘-geso’ would become big buzzwords across the anime-sphere in 2010, and she would even make a cameo in Splatoon in 2015. But it seems that the anime world has since moved on from this show. Squid Girl exists today as a ‘you just had to be there’ type of thing. For me to watch it today is to relive all the times I spent huddled in that one empty room on campus as we watched episode after episode. I also recall those moments scrolling through anime forums stuffed with memes captioned with ‘YOU GOTTA BE SQUIDDING ME’ and ‘DE GESO’. A few anime I saw before Squid Girl may have been better, and there are plenty of anime I’ve seen since that completely dwarf Squid Girl’s quality. Still, no other series better captures that exciting moment in time when anime was still an exciting new art form I began immersing myself in. And for that, I can only give my utmost thanks.