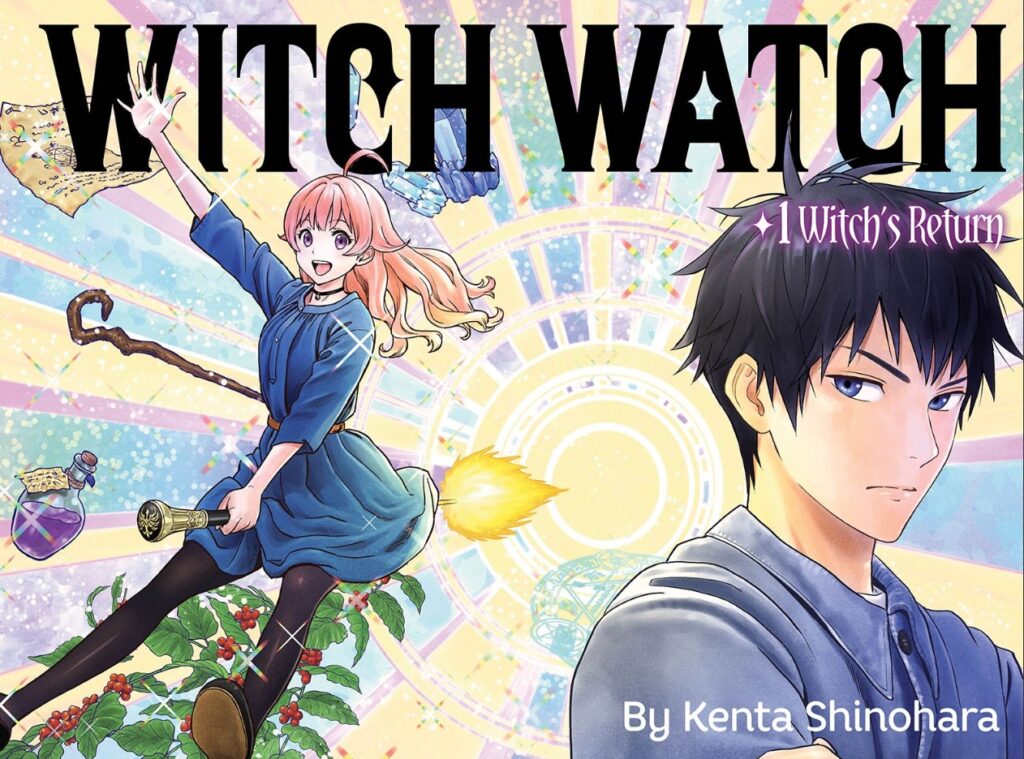 The beginning of a new week can only mean one thing: time for new Weekly Shonen Jump! This is where Jacob investigates the latest and greatest in the magazine, telling you what’s worth your time and what’s not. You can find coverage of other series under the tag Jump Time. Here’s Witch Watch chapter 1.

Considering how many of the veteran authors returning to Weekly Shonen Jump in this latest batch of new series are taking this opportunity to do something completely different, seeing Kenta Shinohara revert back to old habits with Witch Watch chapter 1 is a little disappointing.

As the author of SKET Dance, Shinohara made a name for himself writing and illustrating wacky school-based love comedies. Yet, for his sophomore series, he did something completely different: Astra Lost in Space, which was more of a narrative-driven science fiction work. There were elements of love comedy in there (particularly with how almost every character was paired off at the end) but it was, for the most part, radically different from anything that Shinohara had done before.

Witch Watch isn’t that. In fact, as chapter 1 proves, this is a wacky love comedy like any other that feels far more at home on the SKET side of Shinohara’s career than Astra. The story follows Morihito, a ‘boy with the strength of an ogre,’ who begins to live together with his childhood friend Niko, who is training to be a witch. Combining elements, therefore, of both Burn the Witch and A Couple of Cuckoos (not serialized in Jump, but the premise is very similar) it doesn’t make a very good first impression, nor does it give me much confidence for the future.

One of my main gripes with Witch Watch chapter 1 is how fast it unfolds, and how quickly certain magical elements of the story are explained away. It’s revealed in a matter of pages that Morihito and his family are actually descended from ogres, not just imbued with their metaphorical strength, which is something that probably could have done with a bit more explanation. It’s a bit much.

What’s more, the main narrative of chapter 1 involves Niko casting ‘paper magic’ on herself and getting stuck in the gap between two walls, which Morihito then has to smash to get her out. So much is going on that it’s honestly hard to quantify.

Were there parts of Witch Watch chapter 1 that I enjoyed? Yes, absolutely. It’s refreshing to have a main character like Niko in a love comedy, who isn’t unsure of her feelings about Morihito: she exclaims at one point, ‘He’s hot, Moi is seriously hot! […] And now we get to live together? Agh, what am I going to do?! I’m sure all kinds of things are gonna happen.’ That should give confidence that this isn’t going to be an endless will-they-won’t-they kind of love comedy.

Furthermore, Shinohara’s years of experience making manga shines through in terms of his command of the page and panelling, and the way he crafts compelling character designs. Everyone looks great, and the action is well choreographed; it’s just a shame that the story isn’t a little more interesting.

This rings doubly true when considering that Yusei Matsui, author of Assassination Classroom and Demon Detective Neuro, is trying something completely different with The Elusive Samurai, even if parts of that also rub me the wrong way. Kazusa Inaoka, too, is continuing their move away from love comedy and towards more refined stories with i tell c, the second chapter of which blew it out of the park. If Shinohara had tried something a little more out of his comfort zone, then I probably would’ve been more excited, to be honest.

Nevertheless, I’ve been wrong before when it comes to debut chapters, and I’ll continue to be wrong again. Heck, I lambasted Phantom Seer when it first started, and now it’s one of my favorite series in the magazine. Here’s hoping that Witch Watch can improve on chapter 1. That’d certainly be a magical experience.

You can read Witch Watch chapter 1 for free via VIZ Media.