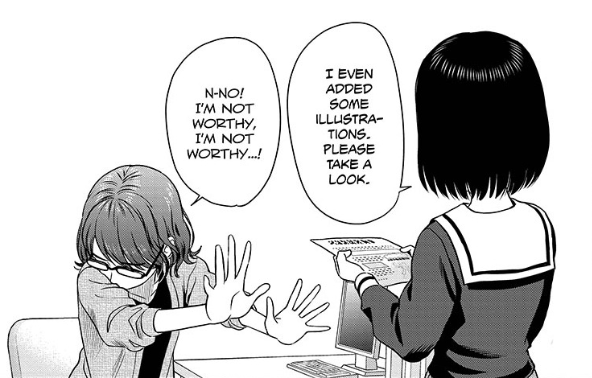 The beginning of a new week can only mean one thing: time for new Weekly Shonen Jump! This is where Jacob investigates the latest and greatest in the magazine, telling you what’s worth your time and what’s not. You can find coverage of other series under the tag Jump Time. Here’s Witch Watch chapter 13.

Witch Watch fans: remember the otaku teacher character introduced back in chapter 3? Well, as it turns out, that wasn’t just a throwaway gag: chapter 13 is all about her, her fandom, and her struggle with the realization that one of her students is her favorite fan artist.

If you’ve ever worked a job or simply related to others in society, you’re probably familiar with the concept of ‘hiding your power level.’ This is an expression taken from Dragon Ball that refers to the act of hiding your hobbies, such as liking anime and manga, for fear of being bullied. To be honest, this probably isn’t necessary for today’s youngsters given how many elements of Japanese culture are now mainstream, but I’m old enough to remember a time when liking anime or manga was enough to get you a swirly.

Witch Watch chapter 13 takes the concept of power levels and imbues it with yet another twist: the fact that teachers are expected to be role models. When Yuri puts the pieces together and realizes that Kuku is her favorite fan artist, she’s unsure whether to engage in otaku conversation with her or feign ignorance: she’s her homeroom teacher, after all. There’s also the fact that most fan artists don’t want to be ‘outed’ in public, so she tries her best to bite her tongue, but ends up giving in at the very end.

If Yuri is stuck in the past, then Kuku can be seen as a sign of the future. Witch Watch chapter 13 starts off with Noel and Kuku’s other friends complimenting her art of her favorite pairing, showing that otaku culture isn’t really a cause for ostracization in Japanese society these days. And when Kuku says ‘It feels really good to just be yourself, never mind who’s watching,’ it really hits at the heart of the issue: bottling up your passions will only lead to something breaking down the line, so it’s always best to be honest with yourself and others.

Wow, that’s actually a really good lesson for Jump to impart to its younger audiences. Witch Watch really is full of surprises, and chapter 13 is no exception.

You can read Witch Watch chapter 13 for free via VIZ Media.