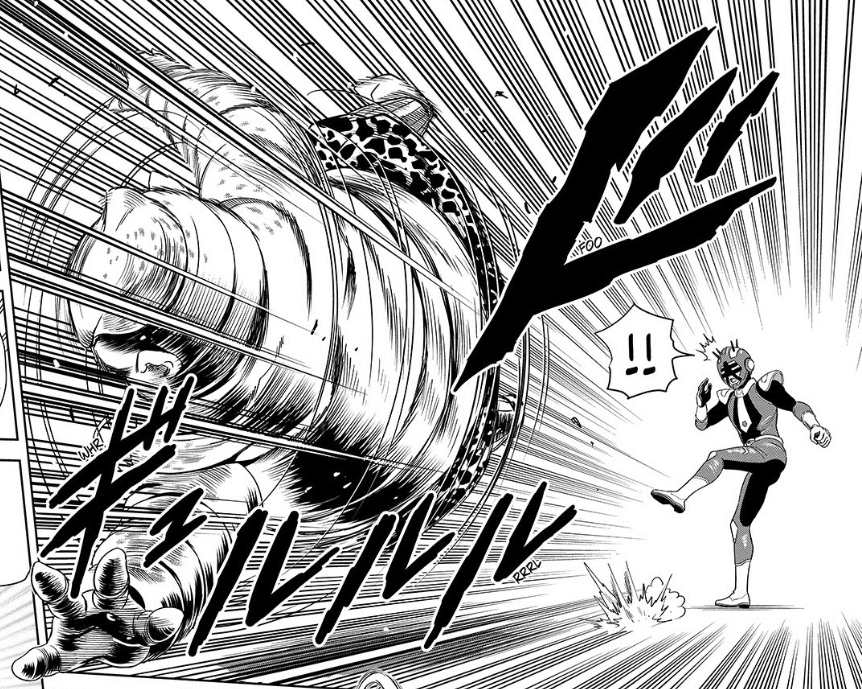 The beginning of a new week can only mean one thing: time for new Weekly Shonen Jump! This is where Jacob investigates the latest and greatest in the magazine, telling you what’s worth your time and what’s not. You can find coverage of other series under the tag Jump Time. Here’s Witch Watch chapter 18.

What do you do when you can’t afford your share of the rent? Well, if you’re Kenshi in Witch Watch chapter 18, then it’s get a part-time job at a superhero show as the world’s weirdest hero: Otto-Man.

For those of you who don’t know Japanese, this means ‘Husband-Man.’ At least the concept behind the hero is pretty much exactly as it says on the tin: Yuichiro Sugata is your average husband, starting every day at 7 a.m. He exchanges tepid greetings with his wife in the mornings before eating breakfast in silence and going to work. There, he gets invited out to lunch by one of his co-workers, before she turns into a giant monster. And then it is Otto-Man’s time to shine!

Naturally, Kanshi can’t quite believe this. The rehearsals for the superhero show in Witch Watch chapter 18 leading up to the transformation are punctuated by his occasional outbursts, declaring at one point ‘Who wants to watch a guy’s awkward morning with his wife?!’ He makes a sound argument, to be honest.

Even so, the tale of Otto-Man turns out to be much more compelling in Witch Watch chapter 18 then it may first appear. First of all, there is the allure of adultery as one of his female co-workers finally works up the courage to invite him out to lunch, despite knowing that he has a wife. She later turns out to be a monster, but this just adds one more gag to the chapter’s already impressive arsenal: probably the best part of the whole Otto-Man story comes when he returns home, realizes that he forgot it was his wedding anniversary, and makes it up to his wife by becoming her footstool.

But wait, there’s more! Witch Watch chapter 18 also has a strong emotional undercurrent as the previous Otto-Man actor, Hironaka, laments about not being able to show off to his son in the role. He invited him to the performance on that day but sprained his ankle the day before, meaning that his role had to be swapped to the otherwise immobile monster. Nevertheless, Kanshi devises a plan: even if Hironaka can only kick very weakly, he’ll pretend like it is much more powerful.

The result is an Otto-Man show that goes completely off the rails, with neither Kanshi nor Hironaka receiving wages at the end of the day. Seems a little harsh when the kids loved it, but there we go. Another funny, self-contained story in Witch Watch‘s arsenal alongside chapter 13!

You can read Witch Watch chapter 18 for free via VIZ Media.