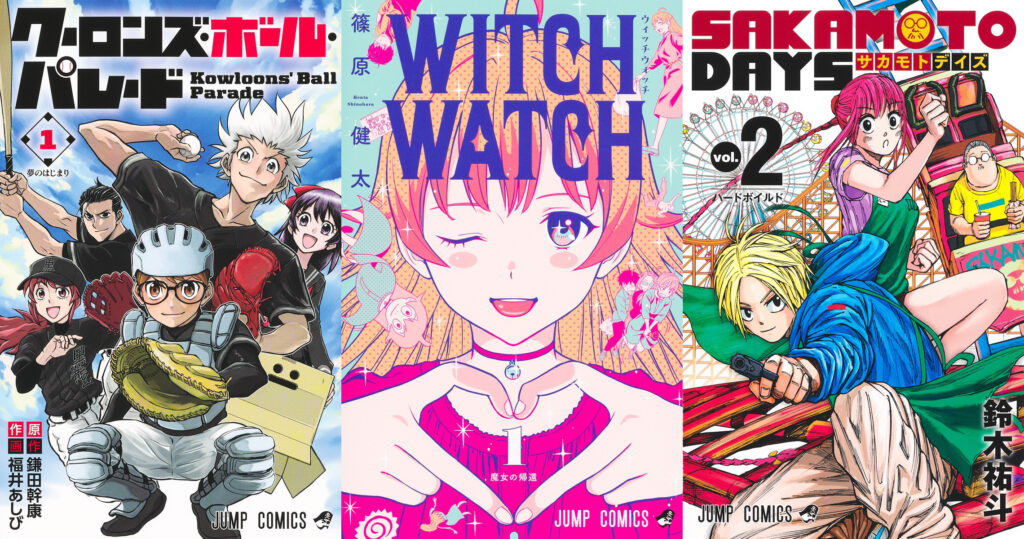 It appears as if Kenta Shinohara has worked his magic once again: the first volume of his latest series Witch Watch has seen some excellent sales, while Nine Dragons’ Ball Parade looks to be on course for cancellation.

Both of these relatively new Weekly Shonen Jump series released their debut volumes on 4 July, spelling sink or swim as per the magazine’s cutthroat editorial policy. All of these sales figures are based on estimations made by the Shoseki Ranking blog, which aggregates sales data from a variety of retailers. They don’t take into account online retailers or speciality stores such as Amazon and Animate, however, so take them with a grain of salt.

In any case, the sales for Witch Watch (marked in red below) are very positive. In the first week of volume one’s release, it managed to rank in at number 73, shipping an estimated 15,480 copies. That strong performance continued into the second week, dropping only slightly down to number 133 and shipping a further 9337 copies. The official Weekly Shonen Jump Twitter account even reported that the series was sold out in many stores, prompting an immediate reprint.

Unfortunately, the story is very different when looking at Nine Dragons’ Ball Parade’s sales (blue). Despite improving immensely over the past couple of months, it has clearly failed to strike a chord with wider consumers: volume one debuted at 396 during the first week of its release, while failing to even appear in the second. All in all, it only managed to ship an estimated 2186 copies… a paltry amount.

To a certain extent, the sales difference between Witch Witch and Nine Dragons’ Ball Parade isn’t that surprising. Kenta Shinohara is a very well-known author with other works such as SKET Dance and Astra: Lost in Space under his belt, while Mikiyasu Kamada and Ashibi Fukui are complete rookies. Perhaps this was inevitable.

Yet, the failure of Samurai 8 last year should serve to show us that veteran authors don’t always necessarily produce commercially successful works. What’s more, a continued strong showing for Sakamoto Days with almost 21,000 copies of volume two sold demonstrates that even new authors can find an audience. Your manga just has to be good.