With a Dog And a Cat, Every Day is Fun Can’t Arrive Too Soon 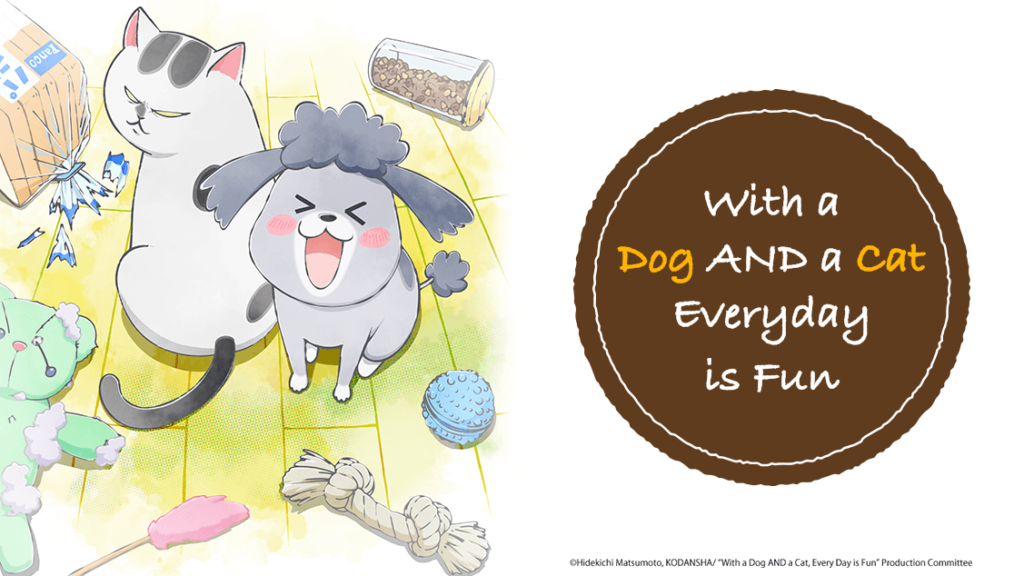 With everything that is going on in the world, this year could use more laughs.

That’s why I was delighted to learn that Crunchyroll is going to stream an animated adaptation of With a Dog And a Cat, Every Day is Fun this autumn.

To be honest, I hadn’t heard about this cute little manga until the end of July. The news about the anime series was buried in the middle of the Crunchyroll Industry Panel at [email protected].  If you blinked, you might have missed it.

Still, the short promo looked cute and funny. Something about it — the fun character designs or the fact that it involves a cat — made me want to find out more.

So What Is It?

Here’s what I’ve been able to find out:

With a Dog And a Cat, Every Day is Fun started out as an online manga by Hidekichi Matsumoto.  In 2017, Matsumoto started posting cute little manga/ illustrated essays about her dog and cat on her Twitter account.

Because even manga characters can’t escape COVID-19, recent illustrations include the cutest possible reminder to wear masks and wash your hands.

The manga/ artwork was also posted on the pixiv Comic website as Inu to Neko Docchi mo Katteru to Mainichi Tanoshii. Then Kodansha picked it up and turned it into a tankobon (standalone manga book).

In such ways are great anime series sometimes made.  The anime adaptation by Team Till Dawn was announced in December 2019, but Crunchyroll didn’t publicize that they had picked up the series until this summer.

You can pre-order an English translation of the first volume of the manga, which has a Sept. 1 release date at Amazon.

The manga follows the real-life adventures of pet ownership.  The dog is cute and playful. (“Super cute, puts heart and soul into everything,” the promo states.)  The cat is destructive and grumpy (“has a super scary face, but you can’t hate him”).

The plots are pretty simple to understand, even without translating — her pets find lots of fun ways to be a nuisance, the cat knocks stuff off the table, the cat learns how to push buttons, the dog is clingy, the cat gets jealous of the dog, etc.  Anybody who lives with a cat or dog would find the situations to be vaguely familiar, but they don’t ever seem cliche.

You can tell a lot about the characters just by the titles used in the promo.  The dog is Inu-kun, while the cat is Neko-sama — the cat is high-ranking and honorable.

Here’s part of Amazon’s helpful description: “With both a cat and a dog, there’s double the antics, double the fun (and double the kibble!) but while Inu and Neko coexist peacefully, they have their own distinct personalities, which play out in unexpected, charming ways during these short-form stories.”

The stories are definitely short and sweet, which suggests short episodes for the anime — Crunchyroll has hosted plenty of short and funny 3-7 minute anime series, such as the slapstick comedy Teekyu.

Or, they could do what Azumanga Daioh or Lucky Star did, and combine a lot of short jokes into a half-hour episode.

Interestingly, the voice actors for Inu-kun and Neko-sama have played a dog and a cat before, although their roles are reversed this time.

Inu-kun will be voiced by Kana Hanazawa.  Hanazawa played the cute white cat/ maid “idol” of a local cat cafe, Momo Hanasaki, in Uchitama?! Have You Seen My Tama?

Tomokazu Sugita, the voice of Neko-sama, played Taro the golden retriever in My Roommate is a Cat.

Hanazawa has had a lot of roles, starting with Holly in Last Exile. Among other things, she was also Angel in Angel Beats!, Shiori in The World God Only Knows, Chiaki in Bodacious Space Pirates, Marimo Bando in Teekyu, and Red Blood Cell AE3803 in Cells at Work!

Sugita voiced Gintoki in Gintama, a store clerk in Lucky Star, and Kyon in The Melancholy of Haruhi Suzumiya.  He was also one of the alternate voices for  Pipimi in Pop Team Epic.

Given the cuteness of the concept, the voice talent, the artwork, and everything else, this anime series should be worth waiting for.

The Japanese manga is available online now. The anime series will begin in October 2020.