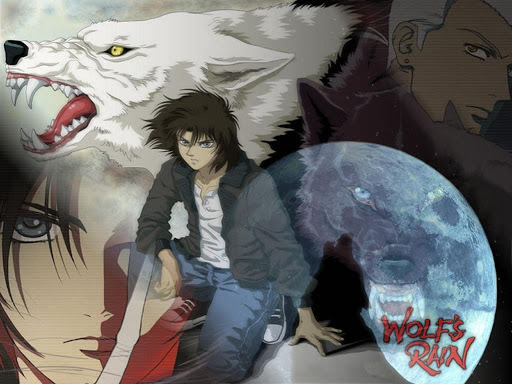 “They say there’s no such place…as Paradise…There’s nothing there…Only if we could fly away, maybe we find another world somewhere…” narrates one of the curious wolves while struggling and fighting hard to survive in a bedeviled, bitter human world.

Despite their intuitions of one another, the pack finds themselves journeying together to the open gates of Heaven.

Written by Keiko Nobumoto and produced by Bones studio, “Wolf’s Rain” has everything thrilling and eerie, making it one of the best dark fantasies I’ve ever enjoyed as a kid.

Toshihiro Kawamoto’s characters and Yoko Kanno’s spine-chilling soundtracks are the added reasons for this 26-episode Japanese anime series to have been such a great success almost two decades back.

Wolf’s Rain is about a pack of wolves that are characterized to project their transformed state of humans. And the portrayal of four young men (wolves) is something less in comparison to the usual “werewolf” sort of dramas that we typically encounter in movies.

Nevertheless, the Japanese fables about tanuki where wild creatures are often disguised as humans is an amazing touch imbued in this post-apocalyptic anime series that was broadcast in the first half of 2003.

In Wolf’s Rain’s breathtaking first episode that aired on January 6, 2003, a wolf disguised as a human tries to save a boy who falls.

He is saved when the wolf grabs him by his arm, but the young boy is left with panic upon seeing sharp teeth nearing his shoulder, and ultimately douses himself to death.

But the pack of wolves manage to find a guide in a magical and mysterious flower maiden who is simultaneously on the lookout by the violent and merciless Nobles.

Director Tensai Okamura’s “Wolf’s Rain” was a rich fantasy treat for the young audience who loved both the original Japanese and dubbed versions of the “winter-themed” anime series.

Its characters are delivered in one of the most enthralling and neatly-told anime episodes, giving us the feeling of traveling on an epic journey surrounded by eerie dark and alluring fantasies.

In comparison with various well-known anime fantasies such as Escaflowne, Wolf’s Rain is darker on its emotional side, making it a perfect anime series for young adults.

Its blazing and cold backdrops make it seem like a Western drama stirred with a mix of romance and lyrical sequences.

A perfect example of this is the awe-inspiring sequence in an episode where the young maiden and the pack of wolves create their “path to Paradise” from millions of beautiful flowers.

On watching this, I kind of felt myself seated at a theatre watching a love drama from a Powell-Pressburger’s movie!

Broadcast in the first half of 2003, Wolf’s Rain sure is one of the best anime titles that captivated young audiences to witness a romantic drama spread out in a Western-themed eerie background.

Though the original TV broadcast in Japan ran 26 episodes of the Japanese anime series, about four of the middle sequences are kind of recaps that add merely nothing to the original narrative.

Nevertheless, this just added to a plot refreshment for those who missed some important scenes of this Japanese fantasy drama.

Wolf’s Rain has not just one but two endings—a stirring climax in the anime’s 26th episode and an intense and tragic-sequenced second climax.

Nevertheless, both the endings somehow managed to keep the viewers on the edge of their seats!

The Revelation of Wolf’s Rain Characters

Kiba is an Arctic Wolf whose ultimate mission is to find the “Lunar Flower” and the gateway to Paradise.

He is Wolf’s Rain’s main protagonist and is portrayed as a powerful wolf who acts on his intuitions, which sometimes push him to the extent of behaving rashly with his fellow mates, giving him the “idealistic man” tag.

Kiba is an epitome of the pride of his pack.

Though he expresses his aversion at the pack of wolves using human disguises, he eventually understands the necessity of this compulsion for their survival.

Attractive and handsome, Kiba is distinguished with his ability of being contemplative, pitiless at war, and always high-held with a chin-up attitude.

As Wolf’s Rain’s main lead, Kiba is ideally “The Chosen One” who is destined against all odds to somehow find the route to Paradise.

A bit of a jerk with his cool shades of “bad boy attitude”, Tsume is Wolf’s Rain anime’s second handsome lad who shelter’s his wolf appeal with a human appearance.

Characterized as a grey wolf with an X-shaped scar on his chest, Tsume is a harsh and self-dependent fighter who buries his true feelings within himself.

He eventually joins the others after his human group in Freeze City strands him with their betrayal.

Tsume doesn’t hold on to even a speckle of a belief in Paradise, but as the plot grows, he starts to believe in their purpose and chooses to follow the pack’s mission out of hope and trust.

His white hair, a distinctive scar on his chest and badass looks give him an appeal of a naturally brushed character in the Japanese anime series.

A Mexican Wolf character with a free-spirited attitude is what Hige is all about.

This character from Wolf’s Rain is an easy-going young lad who despite his obvious laziness hides some secrets for the best reasons known only to him.

But after he meets Kiba, he decides to follow them in their mission of searching the gateway to Paradise without much hesitation and argument.

A big eater in the pack, Hige’s character is also given a distinguished aesthetics with his sharp sense of smell that makes him a reliable wolf who helps in tracking people and unforeseen dangers.

Toboe is the anime’s “Red Wolf” who was initially raised by an old woman owing to which he maintains his side of affection towards humans.

Being the youngest wolf in the pack, he is considered to be the “pup” by his other mates.

Toboe is cast as a wolf who possesses the least enmity towards the human world and this drives him to seek contact with the humans.

Though he’s depicted as an inexperienced and emotional character who is filled with self-doubt at the initial sequences, he slowly becomes a bold and strong-hearted wolf as the plot grows with time.

Donning a red-hooded cloak and giving us the “planted girl” impression, Cheza is the “Flower Maiden” of the popular Japanese anime series.

Her character is given an “artificial human” resemblance as she’s created through alchemy from the Moonflower.

A mutual character among the wolves, Cheza is depicted as the ultimate key that the pack needs to open the gateway to Heaven.

Though she’s shown as a “slumber girl” who is kept under observation and for research in a lab back in Freeze City, she eventually joins the forces of the wolves whom she loves and journeys along with them to help them reach their mission.

Though she’s not a pure-bred wolf, Blue belongs to the wolf-dog hybrid characterization of Wolf’s Rain anime series.

Her blue eyes and thigh-high boots complement the fashionable aesthetics that are wisely incorporated in the anime’s sequences.

But when she finds out that she is a half-wolf who hunts her own kind, Blue bids farewell to Quent and joins the pack.

Wolf’s Rain is a treat to the young audience who look forward to viewing a fantasy-engraved anime with some “romantic” element in it. The background music of this Japanese anime series adds the cherry to the cake with the incredible soundtrack composition.

If you’re looking for an anime that leaves you with a mind-boggling perspective of all things, then I recommend you to take a leap and watch all the 26 episodes of Wolf’s Rain!