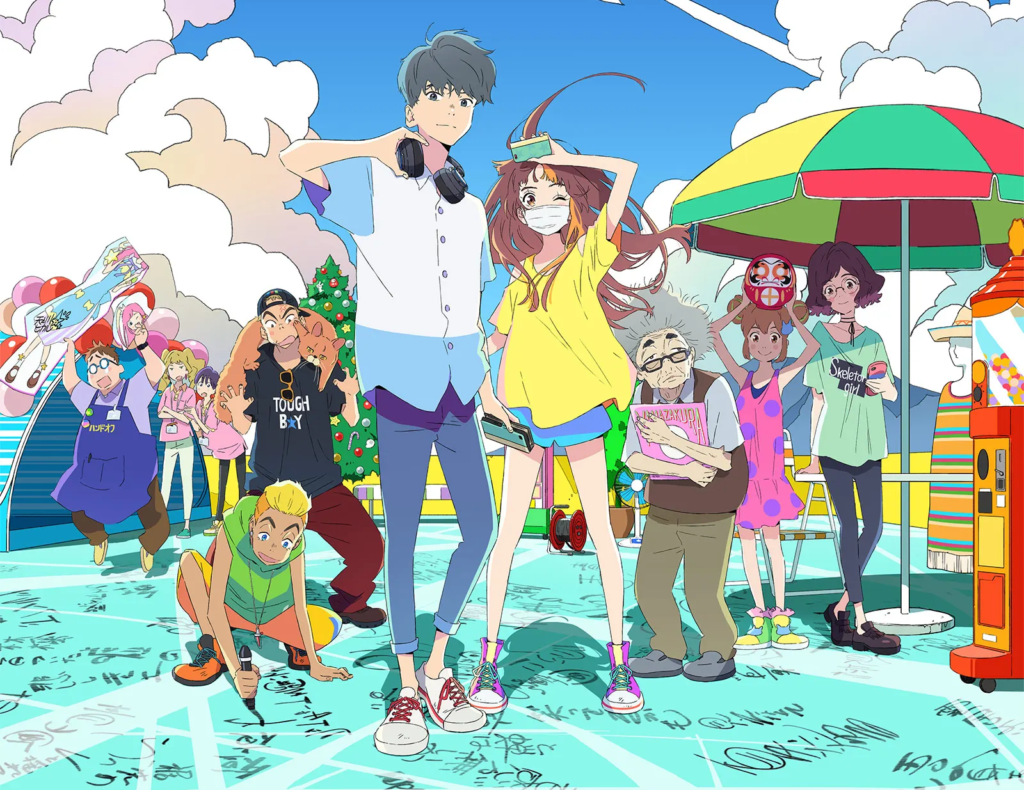 Words Bubble Up Like Soda Pop was one of many Japanese films impacted by the ongoing COVID-19 pandemic that pushed the film away from its much-anticipated summer 2020 release schedule. Following its world premiere at last year’s Tokyo International Film Festival, director Kyohei Ishiguro (known for working on anime like Children of the Whales) noted that everything about the film, from its saturated visual aesthetic to its nostalgic setting of a summer of boredom in a remote shopping mall determined the team’s decision to delay the film by a full year despite being ready to go.

‘It’s a summer movie, I want people to see it in summer.’

Watching the movie following its release on Netflix worldwide outside Japan (the film is receiving a general theatrical release in the country), the reasoning behind the decision becomes obvious. While the film story is tinged by the overbearing influence of social media on our self-worth and the way that these technologies have changed how we communicate and share our deepest emotions, there’s also something timeless about the way the movie captures a summer of freedom and unforgettable experiences, and the adventure it can bring.

In an unremarkable suburban mall converted from an old record printing press, two young teenagers meet by chance. Cherry is a shy boy who struggles to communicate with others, writing haiku poems on his phone while hiding from the world behind his headphones and working at an elderly clinic. Smile, a young social media star known for her buck teeth, covers her smile behind a mask when she needs to get braces to fix what she now perceives as a flaw.

For the next month the pair, alongside Cherry’s eccentric friends Tough Boy and the part-Latin American Beaver, find excitement in the mundanity of their hometown, including a search for a missing record by one of the elderly citizens that Cherry helps to care for.

What’s remarkable is how small this movie feels. A romance anime set almost entirely in a single location, this is a movie driven heavily by its quirky, earnest characters and bold visual design. On this point, it succeeds. While the vibrancy of the pop-art aesthetic the film goes for can at times feel overwhelming in quieter moments, as the bright colors threaten to overpower and distract from these more intimate moments, it’s fresh and stylish and captures the youthful energy the film aims to embody in the bold innocence of its cast.

On the surface, there’s a lot to love about Words Bubble Up Like Soda Pop. While it’s clear that the people who will get the most from this film are those who’ve had to deal with the duality of genuine connection and suffocating peer pressure that social media offers in service of bringing people together, it’s easy to relate to the self-confidence issues and minor problems that these kids face over the movie. Even if the problems are accentuated by social media and the dynamics of that, worrying what others think of you and finding your sense of self is a universal part of growing up across generations and drives deep into the heart of the movie. 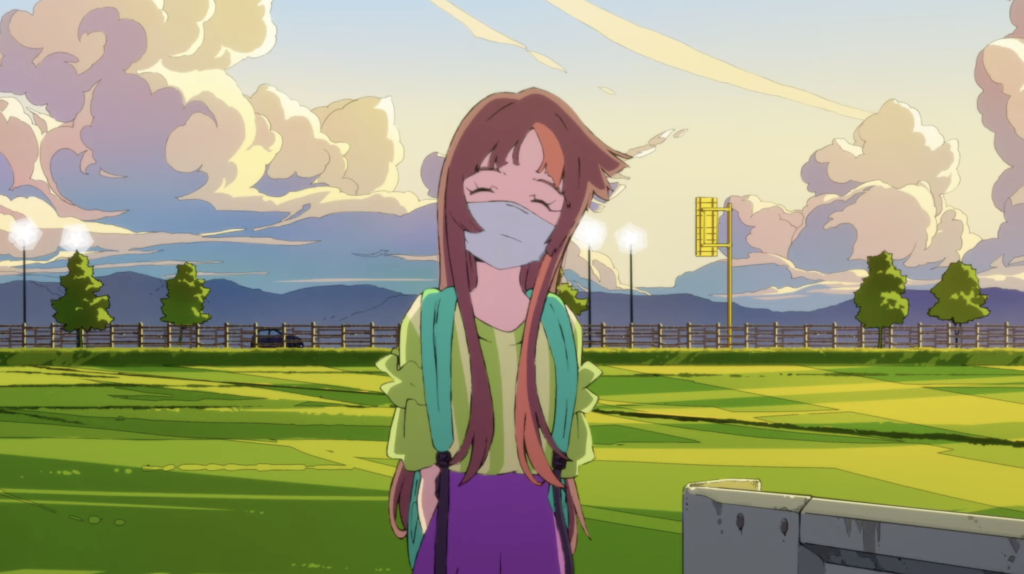 The other conflict of the movie, the search for a lost record of one of the elderly people Cherry cares for in his part-time job, is also welcome in how small it feels. It’s personal and important both for the man who spends his days wandering with the empty vinyl sleeve searching for the lost record, and, at first, feels like little more than something to do while acting as an excuse to bring Cherry and Smile together. It’s also here where the influence of Your Name is felt as it has on many anime films since its release, with the search being a way for these two people from different worlds to come together, get to know each other, and fall in love.

These ideas of connecting across boundaries, even self-imposed ones, hold new meaning in this pandemic era. Shutting oneself out of the world or entering a constructed reality where the opinions of faceless commenters hold you back from expressing who you are (through your smile) hits differently when you can’t necessarily connect with people face to face as easily as you once could. Then again, hiding your face behind a mask is another thing that holds a different significance in 2021.

Still, it’s hard to complain when this movie offers a bold visual direction while boasting a strong staff list including Ishiguro, a script by none other than Dai Sato, and a strong soundtrack from Kensuke Ushio. It’s when you dive beyond these appealing surface-level ideas that certain issues with the movie become more apparent.

While the film’s lack of stakes allows you to enjoy the wistful reminiscence with a leisurely pace befitting of the summer setting, without much going on over the film’s brisk 80-minute runtime, you end up with more than enough time to predict every twist and turn in Cherry and Smile’s relationship. The conflict that does occur is predictable, while even the story of the missing record is telegraphed from start to finish by the halfway point. 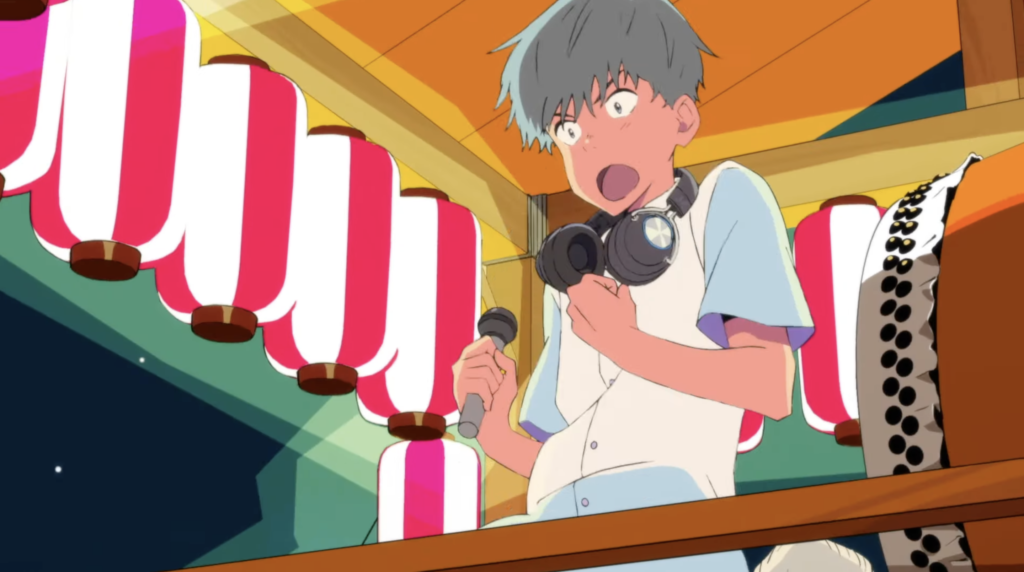 The narrative thread of history being eroded by the march of modernity and how we keep this history alive is the predominant idea driving this subplot and while this feeling still shines through despite its predictability, it ends up breaking the rhythm and our connection to this world when we’re left waiting for them to put together the pieces you finished long before them like a haiku without the right number of syllables.

Overall, Words Bubble Up Like Soda Pop is an enjoyable film, albeit one which feels overly formulaic and could have been so much more. The strong sense of place reminds us where we are in the world today, pushing the film from predictable boredom to something akin to a welcome routine, or a cool breeze in the height of the summer sun. After over a year of COVID lockdowns and separation, a film reminding us of our past and the importance of coming together and reaching beyond our borders is perhaps everything we need. Just don’t expect anything revolutionary.

Words Bubble Up Like Soda Pop is out now in Japanese theaters, and streaming worldwide outside Japan via Netflix.