Last week, Konami shared the news during the inaugural BEMANI PRO LEAGUE stream that they would be kicking off a new in-game event under the name of World Tourism today on 17 June 2021. 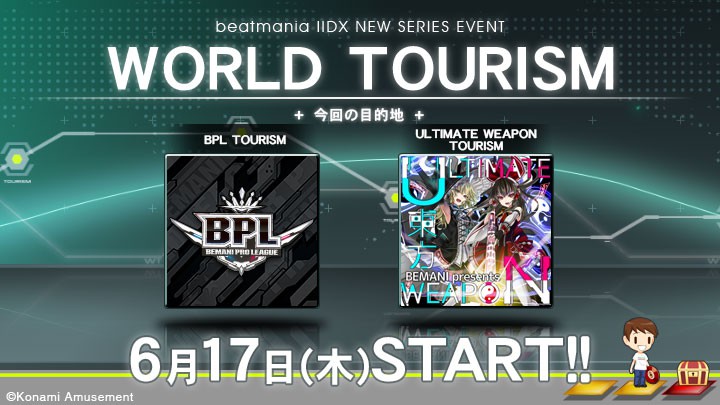 With the start of the event, we have a completely new way to unlock new content to enjoy in the game. Unlike the Meshimase!! Bistrover event, this event doesn’t take place after the game ends, rather you access it in the game directly through a set of new folders on the song select reel.

Once you choose a song from one of the two new folders ‘BPL TOURISM’ and ‘ULTIMATE WEAPON TOURISM’, you will be greeted by a map that is very similar to the same maps that you would see in SEGA’s Chunithm series where you progress to the end of the map to unlock a reward.

The rewards can be MOG that can be used in the webshop to unlock content or you can even get new songs to play in the game. With the new event, today saw two new songs added to the game.

With these being the first two songs unlocked in the World Tourism event, you can bet that we will be seeing a bunch more content being added to the event in the coming weeks. I personally am excited to see if we’ll get each of the BPL team themes. There are some total bangers in there.