What You Need to Know About World Trigger 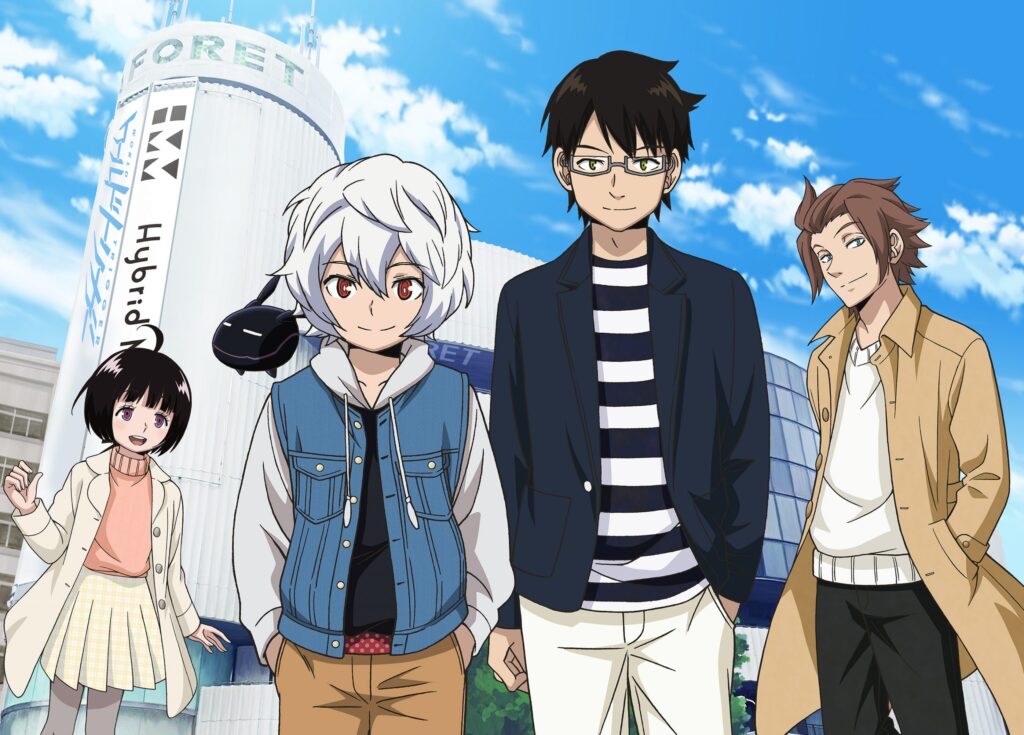 Toei Animation announced that the second season of World Trigger was coming. With no definite time frame, this could be the perfect time to watch all 78 episodes or read the manga, which came back from its hiatus two years ago.

World Trigger is a sci-fi adventure set in an average city.

Four years before the start of the series, warps opened, creatures came out, and invaded Mikado City. Humans were powerless against the attack. As a result, many of these creatures, called neighbors, took humans back to their world and wreaked havoc.

As a result of that invasion, the organization called the National Defense Agency, more commonly known as Border, was created. Border serves to protect the citizens of Mikado City from neighbors.

Four years later, we meet Osamu Mikumo, one of Border’s newest recruits. Osamu is an average guy with a strong desire to protect others. We then meet Kuga Yuma, a mysterious new student, who transfers into Osamu’s class.

All of a sudden, a neighbor attacks the school. Osamu’s first response as a Border agent is to fight the neighbor. However, Osamu wants to keep the fact that he’s an agent a secret. Yuma takes it upon himself to help Osamu with his Black Trigger and destroys the neighbor.

After the battle, Yuma reveals that he is a Neighbor and is trying to hide it from others. This leads the two to become allies in hiding their secrets. The question is: how long can they keep their secrets?

How Do They Fight Neighbors?

Border uses neighbor technology to fight back. This comes in the form of Trion Energy and Triggers.

People can train their trion gland and make it stronger, but they must do it before they turn 20. At 20, the trion gland begins to deteriorate.  Border agents also fight in using Trion, turning their bodies into Trion Bodies.

A Trion Body is a Border agent’s primary source of protection.

When fighting, agents activate their triggers, and their body becomes made of trion. The usage of trion bodies makes it easy for agents to ‘bailout’ or retreat from battle when they need to escape and get more help. This also applies when the user is out of trion.

The actual bodies of the users respawn at Border.

Triggers are special weapons that allow people to channel their trion energy. Triggers come in a variety of forms. They can be used as offensive weapons, shields, and even accessories like camouflage for snipers.

There are also special triggers known as Black Triggers. Black Triggers are extremely powerful triggers that can only be created by people with extremely high trion levels. In order to create a Black Trigger, the user must transfer all of their trion and life energy into an item.

As a result, the user dies and they live on in the Trigger. This makes using a Black Trigger difficult because the trigger must like the person who is going to be wielding it.

There are not a lot of Black Triggers because of the steep cost, and it also is uncertain if a Black Trigger will be created when someone sacrifices their life.

The creation of a Black Trigger comes down to luck.

Daisuke Ashihara is the writer and illustrator of this series. It was first published in the Weekly Shonen Jump in 2013 before it was transferred over to the monthly Jump Square in 2018.

Due to Ashihara’s health, the manga went into a hiatus back in 2016. He came back with a new chapter, 165, in 2018. Since then, the manga has been steadily updated and is currently at chapter 195.

If you’re interested in watching it, please stop reading here if you mind spoilers.

If you don’t or if you’re not about watching 78 episodes of a government organization training to take down aliens, then here’s a summary of everything that’s happened in the anime.

The series begins with Osamu and Yuma meeting at school right before a neighbor attacks.

As a Border agent, Osamu wants to defeat the menace; however, he also wants to keep it a secret that he is an agent. While Osamu argues with himself, Yuma takes down the neighbor with his Black Trigger. Yuma tells Osamu that he is from the world where Neighbors are from.

Osamu teaches Yuma Earth customs for Yuma’s safety. After the attack, top-ranked Border agents come to investigate the damage, and they learn that the neighbor was not destroyed by Border technology. This raises suspicions about Osamu, who was the only agent on the premises.

The next day, more neighbors attack the school. This time, Osamu decides to do his duty and fights the neighbor even though Yuma tells Osamu he will die. As Osamu is about to die, Yuma comes in and saves Osamu using his trigger.

With Yuma in battle, Replica, Yuma’s guardian, introduces himself to Osamu. After the battle, another top team came to investigate the damage and were angry when they saw that Osamu used his training trigger outside of Border.

Osamu is put on leave, and one of Border’s leaders puts an agent, Jin Yuichi, in charge of investigating. Yuma tells Jin everything he knows about what is going on with the massive spike in neighbor invasions. Yuma then meets Chika Amatori, a girl who attracts neighbors.

At that moment, a neighbor attacks, Yuma protects Chika, and Osamu delivers the finishing blow. Jin, who was watching in the shadows, appears with some other agents and takes the trio to Border.

At Border, Yuma is met with hostility by some of the branch leaders; however, one of the leaders, Rindo, invites Yuma to join his branch, Tamakoma. Yuma declines.

Osamu learns Chika decided to join Border, and they talk about it. Osamu extends Yuma an invitation to join his and Chika’s team. Yuma accepts.

The trio immediately begins to train, but the hostile branches send attackers to kill Yuma. However, Jin protects him and takes down the hostile forces.

The trio continues their training in hopes of being able to join the rank wars. The rank wars are a Border-wide competition between all teams in order to determine who are the best teams at Border. Before the rank wars begin, Neighbors launch an invasion and try to capture more humans.

These neighbors however are not creatures; they’re humanoids. They also all use Black Triggers. Border teams take on each of these enemies and beat them one by one. The neighbors leave two of their allies on Earth, Hyuse and the corpse of Enedra.

Osamu ends up becoming a scapegoat for Border’s failure. Osamu and Border reveal that the top teams in the rank wars will be selected to go on a special mission to invade the neighbors world and rescue the captured humans.

The season ends with the official beginning of the rank wars.

While half of this season is filler, the other half is not.

In the first part of this season, we follow the trio as they train some more in between rank war battles. During their training, a mysterious boy, Xeno, captures Chika. As Osamu and Yuma are negotiating with Xeno, they are attacked by a mysterious enemy.

As a result, they gain Xeno’s trust, and they meet Lilith. The duo reveals that they are fugitives from their world and are hopping from world to world. Throughout the season, their enemies, Gieve and Charon, constantly attack the group until their motives are revealed.

Lilith is a weapon that was meant to be deployed in the war she and Xeno ran from. Gieve and Charon are in pursuit of Lilith and want to bring her back. This leads the group to constantly fight off Gieve and Charon.

They manage to defeat them; Xeno and Lilith leave Earth, and the rank war battles officially begin.

The trio as a whole struggle with their own weaknesses during the battles, but they manage to win enough matches to rise in the ranks. While training, they find out what happened with Endera’s corpse and Hyuse.

The trio also learns about what is happening in the worlds the neighbors come from, and they realize that time is of the essence.

With season two ending with information about the neighboring worlds, time is of the essence. However, the manga is still covering the rank wars, so it is not likely that the anime will conclude the rank wars.

There’s no information about what is going to be in this new season, but these are guesses based on the information we have so far.

Where can I read/watch this?

The World Trigger anime is available on multiple sites.