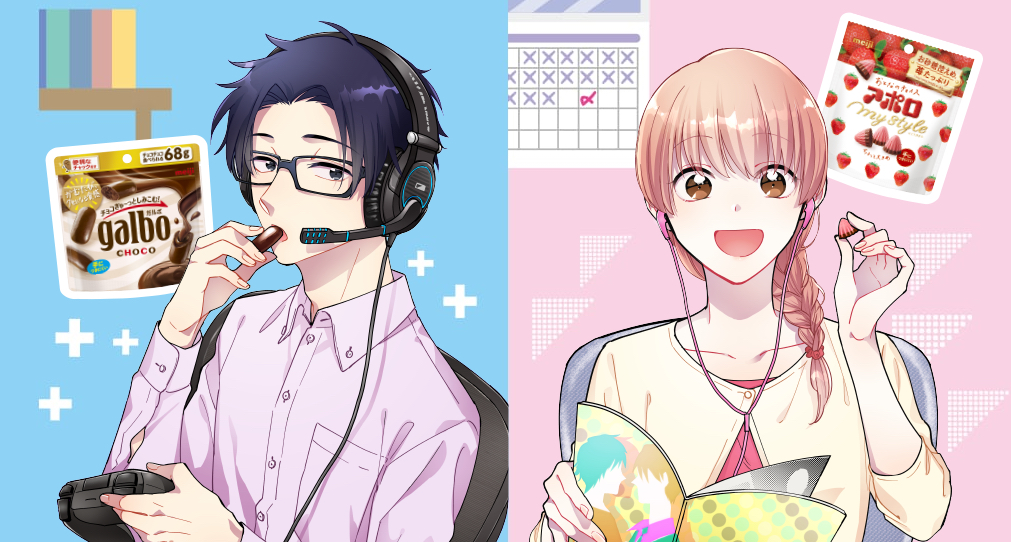 The romantic comedy manga Wotakoi: Love Is Hard for Otaku started a prize campaign with Meiji chocolate on Tuesday.

The collaboration is called “It’s Difficult for Otaku to Work Remotely,” which feels like a very 2020 theme.

Art for the campaign features the two main characters, Hirotaka and Narumi, maintaining social distance as they play video games and read manga — remotely from each other, of course.

Of course, they also snack on Meiji chocolate as they do. Hirotaka has Meiji Galbo, the chocolate-covered cookie candy. Meanwhile, Narumi munches on Meiji Apollo My Style, the strawberry-chocolate one.

For me, there’s a bit of personal irony here, as a person named Fujita created a story involving otaku and featuring remoteness. (To the best of my knowledge, Fujita is not related to me.) 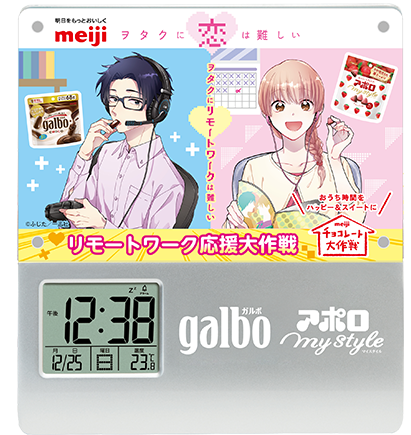 The collaboration started this week and continues through Jan. 31, 2021.

If you purchase one or more Galbo products — of which they have many varieties — and one Apollo My Style, you can enter one of two drawings to win prizes.

Buy five of the appropriate candies, and you can enter to win a Hirotaka Nifuji talking clock. The clock features the voice of Kento Ito, who plays Hirotaka in the anime version of the series.  Only five people will win one of the clocks. 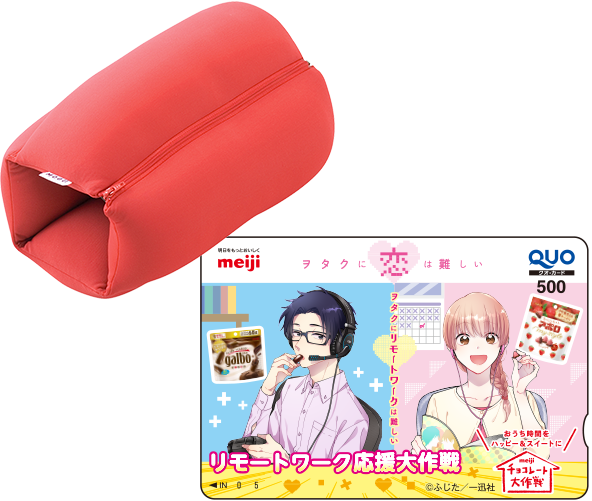 For two candies, you can enter the drawing for a MOGU roll cushion and a 500 yen QUO card.  Fifty people will win the cushion and card combination.

A MOGU roll cushion (shown above) is a segmented pillow which can be folded or zippered in a lot of different ways.

All of the instructions on how to enter the contest are available at the website, along with a printable postcard to drop into the mail.

The campaign is part of Meiji’s Chocolate Daisakusen, which features lots of chocolate-based “missions.”

Incidentally, you may have noticed that the campaign’s title mentions work, but Hirotaka and Narumi aren’t pictured doing that.

That’s all explained in the promo material for the campaign. It notes that “there are many things that hinder concentration, such as manga and games.” It adds, “Change your mood with Galbo & Apollo My Style!”

Wotakoi (the full title is Wotaku ni Koi wa Muzukashii) started out as a webmanga on Pixiv. Ichijinsha currently publishes the manga. Kodansha Comics does the same in English.

It is written and illustrated by Fujita.

It tells the story of a pair of otaku and their romantic/ work/ life misadventures.

An anime version was created in 2018, which Amazon Prime seems to have exclusively in North America.  A new OVA is expected to come out in February of next year.