Yakuza: Like a Dragon Shows That Change is Good for the Popular Series 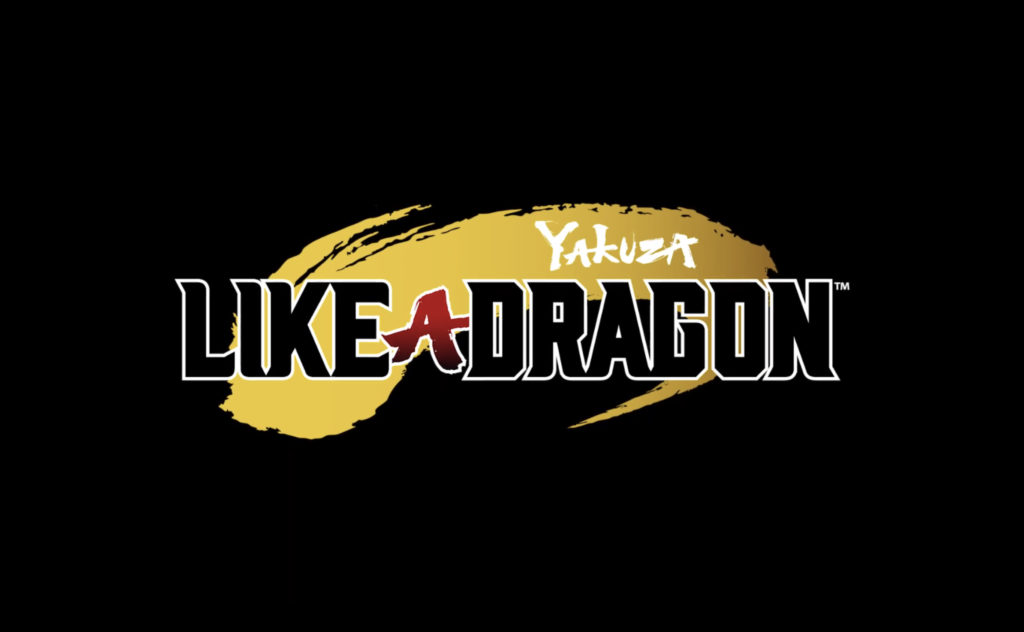 I feel like it’s best to start this with an admission of guilt: I’ve never played a Yakuza game before. I’ve been interested in them since the previous generation of consoles, but uncertainty on where to get started with the series among other things meant that, despite loving the concept of the games and wanting to play it, I never did. I do plan to change this, however, and not just because of the praise the series has been receiving and the fact that all the games in the series will soon be available on just a single platform, the PS4. On top of the exciting new trailer for the game, having played the upcoming newest title in the series, Yakuza: Like a Dragon, at Tokyo Game Show this past weekend, what I was found was a really enjoyable experience and a great introduction to the franchise as a whole for newer players such as myself.

In many ways this is perhaps one of the riskier sequels to occur to a major gaming franchise this generation, especially considering that its a risk that, if it fails, could squander the series’ newfound international success. Yakuza: Like a Dragon, known as Yakuza 7 in Japan, is doing away with many of the core elements of the previous games. Gone is the familiar setting of Kamurocho for the city of Yokohama, while our protagonist has also changed from Kazuma Kiryu to Ichiban Kasuga, the protagonist of the Japan-only mobile game Yakuza Online. While the city certainly feels familiar as you travel through it, this isn’t simply a reskin of Kamuracho by any stretch of the imagination. The scenery is fresh and exciting, with a different vibe to the city of Yokohama that definitely evokes the mood and atmosphere of the city it is emulating.

Of course, the thing that makes this game such a massive departure from previous titles (and the source of controversy) is the game’s battle mechanics. Ever since its inception Yakuza has been an action game first and foremost, with real-time battles taking place dynamically within the game’s world. Yakuza: Like a Dragon, on the other hand, goes for a turn-based battle system evocative of an RPG like Persona or the series our main character falls in love with and references on multiple occasions, Dragon Quest. Battles aren’t as static as that description may suggest, with enemies moving freely around the arena while they wait for you to make your move, but it’s certainly a massive departure from what series veterans are familiar with. 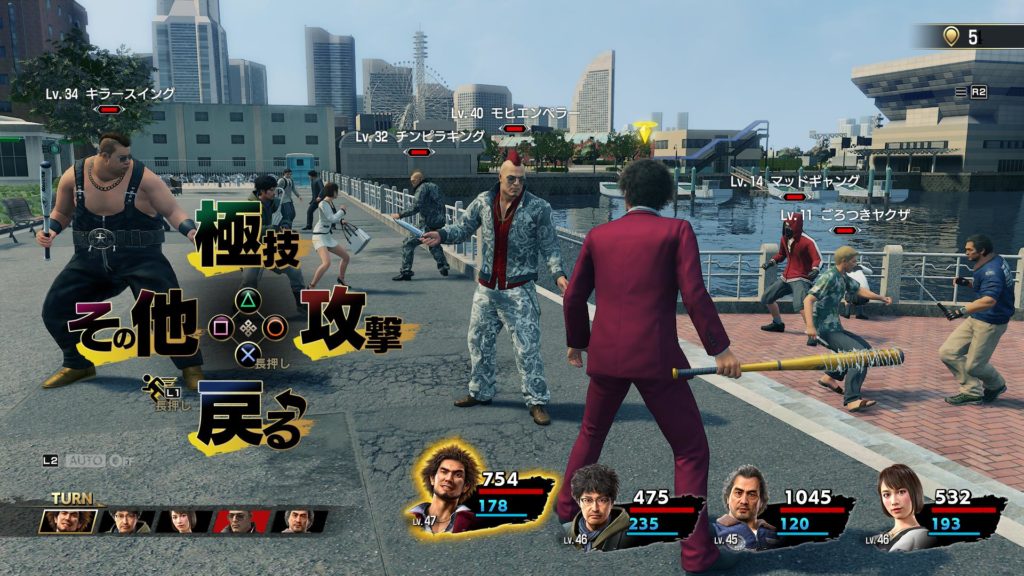 It’s a fleshed out and interesting addition, though. Battles have a dynamism that turn-based systems can often lack. In particular, the game’s combo system allows for more tactical decision making to be considered when deciding who to attack and how to attack them. While each person in battle can only make one move per turn, with the right attack and target being chosen you could, for example, launch an enemy into another to damage both of them, or you could launch them into another teammate who will initiate a bonus attack for more damage. It requires genuine tactical consideration when deciding which moves to use, and as external elements can also have an influence on battle as well it makes for a unique stylistic take on the turn-based battle system.

Lots of hallmarks of the series remain, in particular, the mini-games. The side content in a Yakuza game, in particular, its arcades, have always been important to the series despite being optional, and the one new mode in particular that was playable in the demo (if you knew where to look) was Dragon Kart, a Mario Kart-style racing games through the streets of Yokohama. Only the single track was available to play here, but this was a fun arcade karting game featuring the game’s large cast of characters. Guns could be found strewn around the track to fire at opponents, while boost pads were even found lying on the ground that could be used to race past the competition. It’s not a cakewalk either, with enemies breathing down your neck. Alas, as much as I tried I couldn’t win a race, yet I had a blast with the mode all the same.

Another mini-game I was able to try required you to collect drinks cans up from the floor as quick as possible before returning to the goal, which, albeit basic, was enjoyable, and is a mode that on higher difficulties could be a fun little distraction from the main story. In fact, even in just the small area, we were allowed to explore in this demo there were a lot of mini-games available, with more presumably available in the final product. Although I ran out of time before having the chance to try it out the game has pachislot machines available to play (in PIA-branded entertainment centers that actually exist in Japan itself), while shogi also makes a return from previous games. Even outside of the main quest, you won’t be bored. 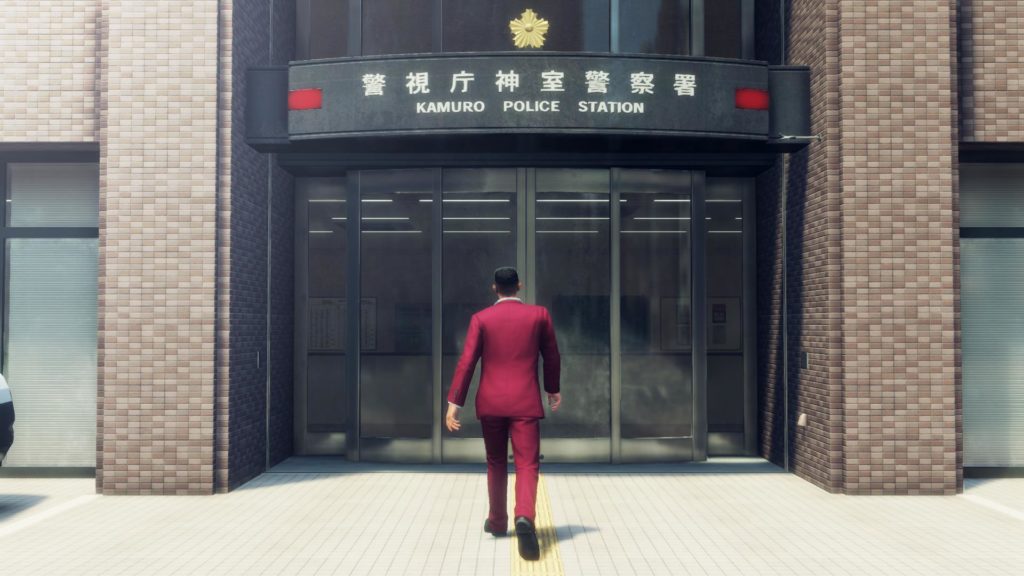 For anyone who feared the game would suffer and fall apart due to its massive gameplay changes compared to other titles in the series, there is no need to worry. The battle system, perhaps the most controversial change, is intuitive yet tactical and is a welcome addition and change of pace from previous titles, the world is an interesting place to explore and the mini-games are fun as well. The early story cutscenes, alongside what has already been showcased in trailers, are setting up what looks set to be an intriguing adventure in the long-running series, and though the international release is set for a later, as-yet-unknown date in 2020, fans of the series in Japan won’t even have all that much longer to wait to try this new and unique take on the Yakuza series for themselves in January 2020. One thing is for certain: after this short Tokyo Game Show preview, I’m eager to see more of what this game has to offer.

You can find more info about the Yakuza: Like a Dragon over on the game’s official Japanese website.