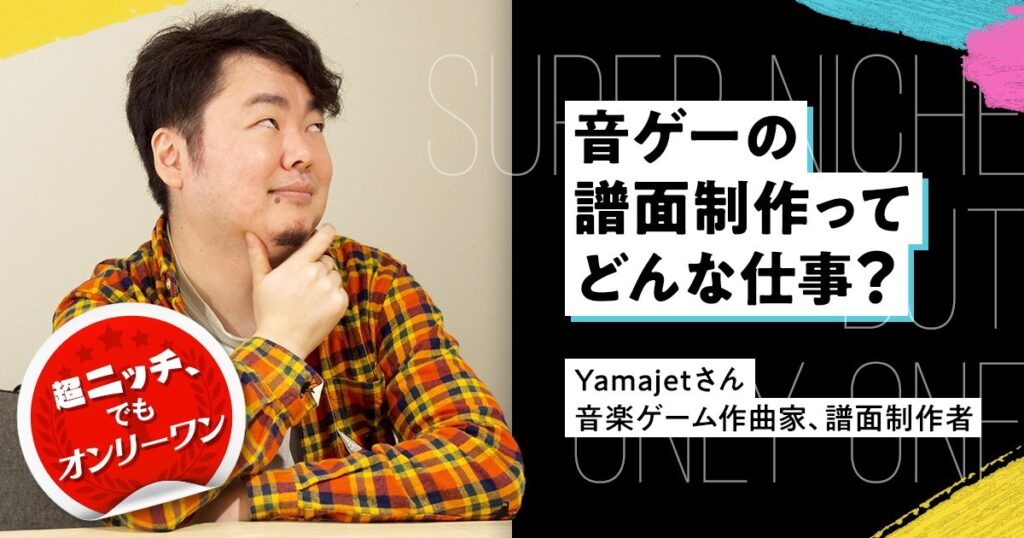 If you’ve been in the music game scene worldwide at any point in the last 15 years, the name Yamajet might seem familiar to you. He’s been a very influential part of the Japanese doujinshi scene and has even been around as a BMS creator not only for music but for note charts as well. He has been one of the few that have turned something that started out as a hobby into a career. Now, rather than having to skirt around the legality of copyright, he now has the opportunity to work with the very same companies that he grew up loving in an official capacity.

The Japanese publication Workship Magazine had the chance to sit down with Yamajet recently and talk to him about exactly what it’s like to be a professional note chart maker for many rhythm games.

The interview with Workship Magazine kicks off with Yamajet reflecting on his past and how he got to where he is now, within not only the music game industry but the entertainment industry in general. He talks about how he started making doujin music as a hobby and how he has always been a fan of music games. He only went to university for one year before being offered a position at a company that took care of all the audio aspects of bishojo games in Japan. He worked for this company for four years before deciding that he wanted to go back to the freelance life, stating that he’s never been good at planning for the future, so he kind of just rides the wave and sees where it will take him and figuring it out from there.

After talking about his background for a bit, they get into the nitty-gritty of what he is currently working on: making charts for various rhythm games. He states that it’s a completely different process from making music for a game, and that the look and feel of the charts are as important as the music itself. For instance, if there was a portion of a song that sounded like ‘do-re-mi-re-do‘ on a piano and the accompanying chart did not make the same up to down pattern, it would ‘feel weird mentally’ to the player. It’s nuances like that that make creating charts for various rhythm games enjoyable. He goes on to say that because he is an outsourced member of the staff, he doesn’t get to decide the difficulty of the charts that he makes; the companies tell him whether to make something easy or difficult.

During the interview, he talks about how he got his foot in the music game scene by making BMS charts for a beatmania clone on PC where he and his peers would need to physically cut sounds out of the songs that they were looking to play, arrange them in a note chart, and program the note chart to trigger the sounds that they cut out in order to make the game playable similar to the bemani titles he loved. He says that this is ‘exactly what he is doing now’, so the experience that he got from doing that all those years ago proved to be invaluable now. He even said that BMS is the reason that he is where he is right now by allowing him to get involved with doujinshi, live events, DJing, and so on, stating that he’s had the opportunity to make many friends across various circles for whom he is truly grateful for.

Yamajet currently is working on a mobile title called D4DJ which he says is ‘unique’ because you have a crossfader and the ability to scratch in the game; the game also offers a new sense of ‘immersion’. He states that his current goal is to have a game that he composed for and made note charts for to ‘breakthrough’ internationally and have the opportunity to perform internationally.

I have a feeling that Yamajet will be able to realize his current goal sooner than he thinks.