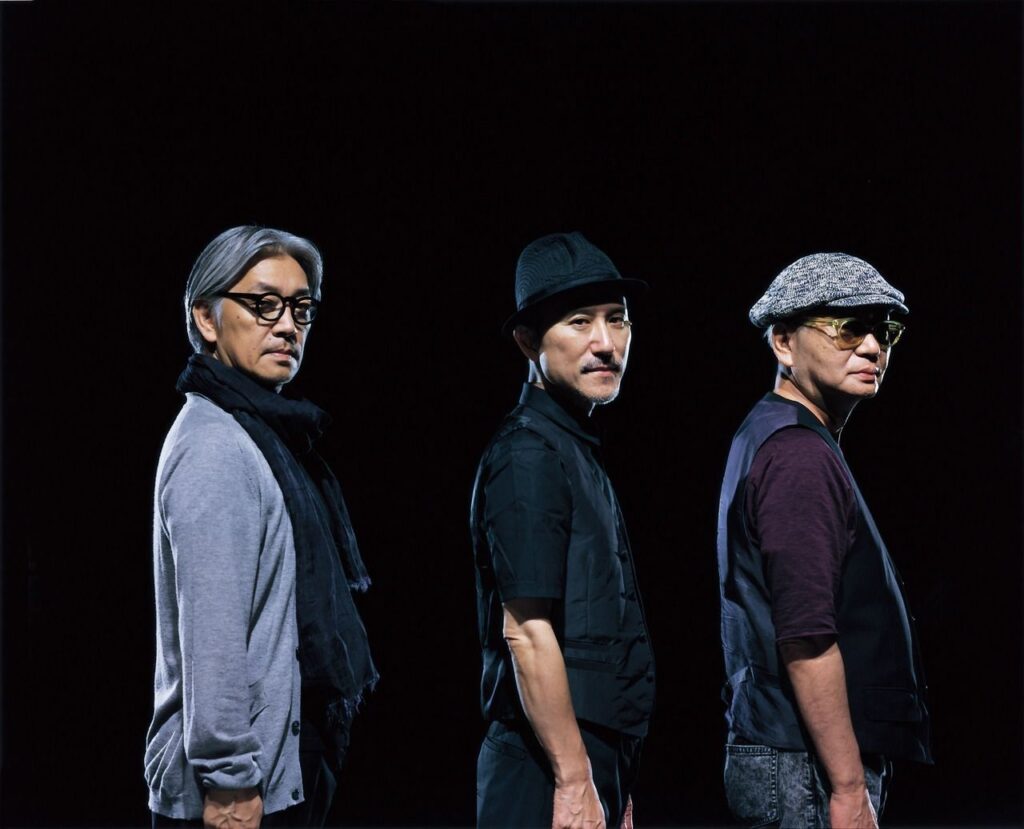 Yellow Magic Orchestra (YMO for short) is one of the world’s oldest and most revolutionary electronic music acts. Based out of Tokyo, YMO was formed by Haruomi Hosono, Ryuichi Sakamoto, and Yukihiro Takahashi in 1978. The three masterfully used a wide array of synthesizers and electronic instruments as the genre of electronic music was first emerging, in order to explore and experiment with new types of sound.

Following in the footsteps of acts like Kraftwerk, YMO (and its individual members) is credited with influencing in part the birth of many genres that began to pop up in the 80s, such as synthpop, city pop, j-pop to name a few.

Following their first albums in the late 70s, YMO was explosively popular in Japan going into the 80s, often spending months in top spots on the Oricon charts (music popularity tracking in Japan similar to the Billboard charts) at a time, even with multiple releases occupying a number of spots.

Popular music in Japan at the time was thus thoroughly dominated and shaped by futuristic computer-age electronic music. This was essentially the perfect time and place for their techno stylings, which included a lot of sampling from various arcade games which were also gaining in popularity in a massive way at the time.

With the ’80s seeing a huge boom to the arcade and console gaming industries, a generation of chiptune musicians would soon be emerging to score said games, and YMO was likely the biggest inspiration behind the emergence of most of these musicians.

Basically a Blueprint for Chiptune Music

The self-titled Yellow Magic Orchestra album came around in 1978 to Japan, and in early 1979 to other parts of the world. Featuring predominantly electronic instruments such as Korg’s PS-3100 synthesizer and VC-10 vocoder, Roland’s MC-8, and the Moog III-C to name a few.

The trio sought to give their home country a sound to ring in a new age of music by recreating themes commonly associated with Japan and China while using as few acoustic instruments as possible. Five singles were eventually released from among the album’s tracks, spreading to various corners of the globe as the decade came to an end.

Computer Game / Theme from the Circus was one such track from the album that propelled YMO to early fame. It sampled sound effects and jingles from arcade games at the time, building up to melody that could be described as quintessentially Eastern in nature.

With Asian culture being mysterious and exotic to the West at the time, this was the perfect tune to serve as an introduction to YMO’s repertoire of electronically synthesized and sampled noises – also exotic and fresh sounding, for a multiplicative complementary effect.

Tong Poo was a track largely composed by Ryuichi Sakamoto that originally appeared as the opening track on the second side of the album. As the name suggests, the track’s inspirations originated from Chinese music popular around roughly the same time.

Many of the Sounds found in Tong Poo were replicated over a decade later by game composers. Anyone who played a Sega Genesis in the 90s should feel a comforting familiarity upon hearing the tune for the first time.

The ‘Yellow Magic Orchestra’ Album was Meant to be a One Time Project, However, Popularity Insured YMO as a Group was Around to Stay

Following the release of their first album, YMO performed several concerts all around the world, toting their entire arsenal of synthesizers, electronic drums, and guitars along with them wherever they went.

Although their music wasn’t always commercially popular in the West, and not all of their albums would receive full releases worldwide (at least until decades later), YMO was ready to put their masterful musicianship and many years of individual skill and refinement out for the entire world to see in all its glory.

In the summer of 1979, shortly before the release of Solid State Survivor, YMO played a concert at the Greek Theater in Los Angeles, California. An album version of the concert was released in 1997, featuring 7 tracks from their first album, as well as some music that would end up on Solid State Survivor.

The YMO 1979 Trans Atlantic Tour album from 2001 features a larger sample of the music YMO played during this period, re-featuring the Greek Theater performance as well as tracks played during a live performance at Hurrah in New York later that year.

In 1980, the band performed at the Nippon Budokan arena, one of the most recognized concert venues in Japan. The Budokan was built in Tokyo for the 1964 summer Olympics as a venue for martial arts and has grown famous as artists from all over the world have held high profile concerts there. This performance is regarded as one of YMO’s biggest concerts, taking place at the tail end of the year, after they had performed a second international World Tour over the course of the year.

This tour was also released as a live album, World 1980 Tour, released in 1996, featuring tracks recorded from their live performances at Hammersmith Odeon in London, Theatre Le Palace in Paris, and A&M The Chaplin Stage in Hollywood.

Video of (most of) both concerts can be found on YouTube if you want to get a closer look at the vast array of instruments YMO had at their command, and relive a few of the most important moments in the band’s history.

‘Solid State Survivor’, the Sound of the Future

YMO’s second album Solid State Survivor has a distinctly futuristic sound to it, almost as if it were created by a race of musicians from fifteen or so years in the future, and somehow transported to the past.

It featured many of the most iconic songs from the group and was YMO’s single most successful album in Japan. Oddly, the album was not released overseas in the United States originally, although many of its songs made it to the US release of ×∞Multiplies a year later.

Most notable on the Eastern front is Rydeen, a track featuring a rather simplistic melody that repeats itself a number of times with electronic sounding whistling-like leading and some segments that featured arcade game bleeps and bloops. The way the track loops, as well as the overall structure and style of the track, make it seem like a proto-chiptune track of sorts.

It seemed as if countless tracks found in games in the 80s and 90s had Rydeen-like qualities; perhaps this track was the single most important track to Japanese game music composition throughout the 80s and 90s.

In the West, the track Behind the Mask is fairly well known and has been performed by other artists. Michael Jackson produced a funky version of the track infused with his own signature style and even wrote lyrics to along with it, which have essentially become the official lyrics for the song.

Eric Clapton, Greg Philliganes, and even Ryuichi Sakamoto himself have covered the lyrical version. Unfortunately, Jackson’s version was shelved and not officially released until the album Michael was released in 2010 following his death due to royalty disputes with YMO’s members and management.