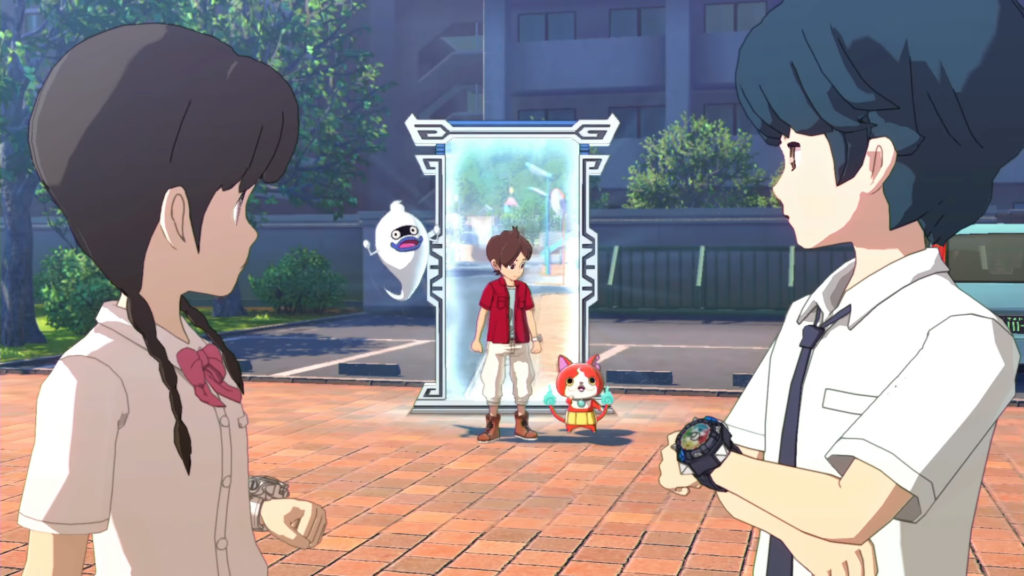 Yo-Kai Watch 4: We’re Looking Up at the Same Sky is a big new step in the popular kids multimedia franchise. Over the last few years, the series has taken many new approaches, from replacing the comedy anime with the more serious Yo-Kai Watch: Shadowside, to creating the tragic Forever Friends film with a brand new character. And now the new Nintendo Switch game is attempting to consolidate all of those stories and tones into one single game. And the newly released opening movie is pretty clear about how those stories differ.

The movie starts off with Nate, Katie, and Inaho, the protagonists of the Yo-Kai Watch trilogy of games facing a monster through a door. They’re surrounded by the fun and silly Yo-Kai, Jibanyan, Whisper, Komasan, and Komajiro. In the anime series, all of these characters have their own recurring jokes and sketches.

The camera then follows the beam through the door to realize that the monster is actually one of the Yo-Kai of the cast of Yo-Kai Watch: Shadowside, a film, and TV series where Yo-Kai have both light and shadow forms (but both are pretty creepy). As the investigation team faces off against Nate and Katie, their own versions of Jibanyan and Komasan face off against fearsome creatures.

The camera then zooms out yet again to meet the cast of Yo-Kai Watch: Forever Friends, a heartfelt adventure film set in the 1960s. So to contrast the difference between Forever Friends and the other entries into the series, the camera explores the streets of 1960s Sakura Town and some of the more classic Yo-Kai.

As a fan of the series, I can’t help but see how characters like Nate are able to deal with the more horrific sides of Shadowside or how Forever Friends protagonist Shin adapts to a city 50 years later. More importantly, I’m interested to see how the comedy holds up. As a nod to the original game, the opening movie of Yo-Kai Watch 4 features a new arrangement of the original Gerapon Song.