After a lengthy break from the manga game, Dagashi Kashi author Kotoyama has returned to the pages of Weekly Shonen Sunday with a new series, titled Yofukashi no Uta (Night Owl Song).

Debuting in this week’s issue no. 39 of Weekly Shonen Sunday, Yofukashi no Uta follows the story of Yorukami Kou, a middle school student who, one day, finds himself unable to fall asleep due to trouble at school. He decides to take a walk to clear his head, but finds himself approached by the mysterious girl Nanakusa Nazuna, who offers to resolve his worries and heads home with Kou to “fall asleep together.”

The Weekly Shonen Sunday official website describes the story of Kotoyama’s new series as ‘Love is born in the evening. This is the story of how I fell in love with Nanakusa Nazuna. A fun love story between two night owls!’ 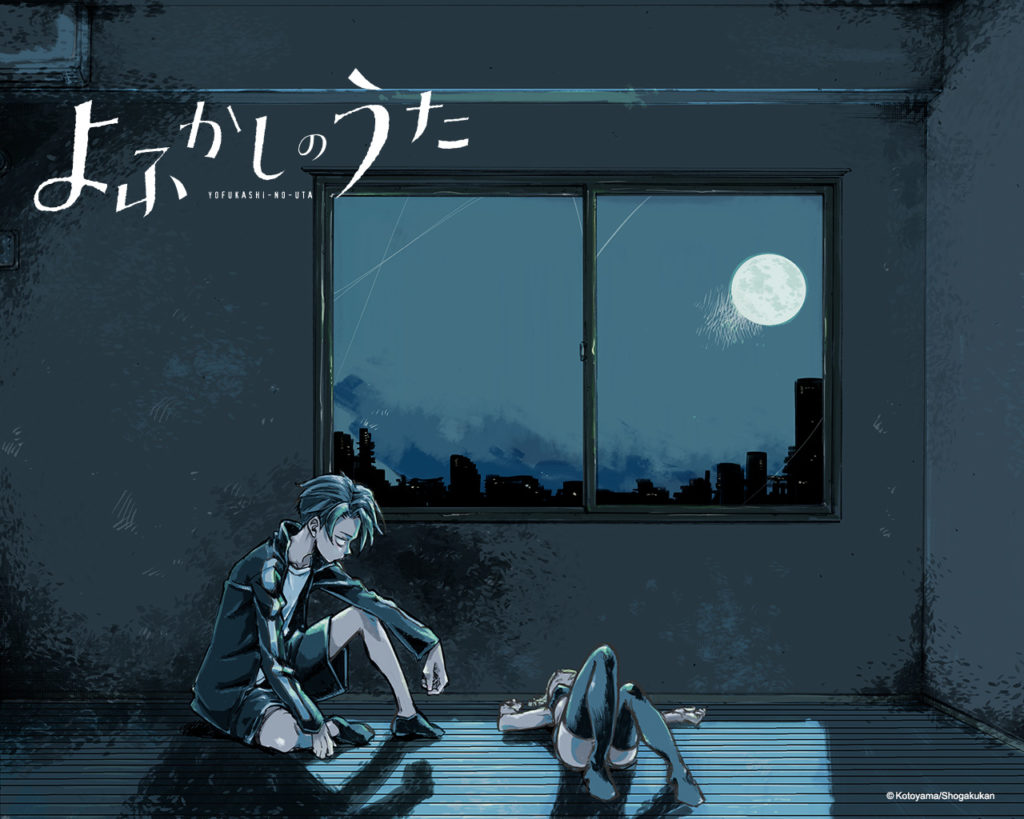 From this, you’ll be able to gather that it’s pretty much textbook Kotoyama stuff. For one, it’s a love comedy just like Dagashi Kashi, but it’s also got some pretty suggestive undertones. The only big difference seems to be a shift in tone and setting to moonlit evenings, as distinct from Dagashi Kashi’s sunlit countryside summer.

Even so, it’s good to see Kotoyama back in the manga game. It’s been around one year and three months since Dagashi Kashi concluded in Weekly Shonen Sunday, but Kotoyama’s been pretty quiet in that time. I wonder if he’s been working on Yofukashi no Uta this whole time, or whether he’s just been recovering from the stress of weekly serialization.

Kotoyama doesn’t exactly want to make a big deal out of his new series despite his lengthy break, however. Speaking on Twitter, Kotoyama stated ‘It’s nothing, but I can’t help but laugh at all the people saying ‘Kotoyama’s back!’ It’s not really that big of a deal, right?’

But both fans and publishers alike will no doubt be over the moon to see Kotoyama back in Weekly Shonen Sunday with Yorufukashi no Uta. While there are lots of great love comedies in Sunday right now, such as the legendary Rumiko Takahashi’s new series MAO, none of them are quite like Kotoyama’s unique creations.

Let’s also not forget how popular Dagashi Kashi was during its serialization. The manga had over three million collected volumes in print as of the release of the final, 10th volume in April 2018, and it spawned two very popular anime series by Studio feel.

For a time, there was no escaping Kotoyama’s Dagashi Kashi and its main girl, Hotaru – so Shogakukan will no doubt be hoping for another hit this time around with Yofukashi no Uta. For the fans’ sake as well, I sure hope that turns out to be the case.