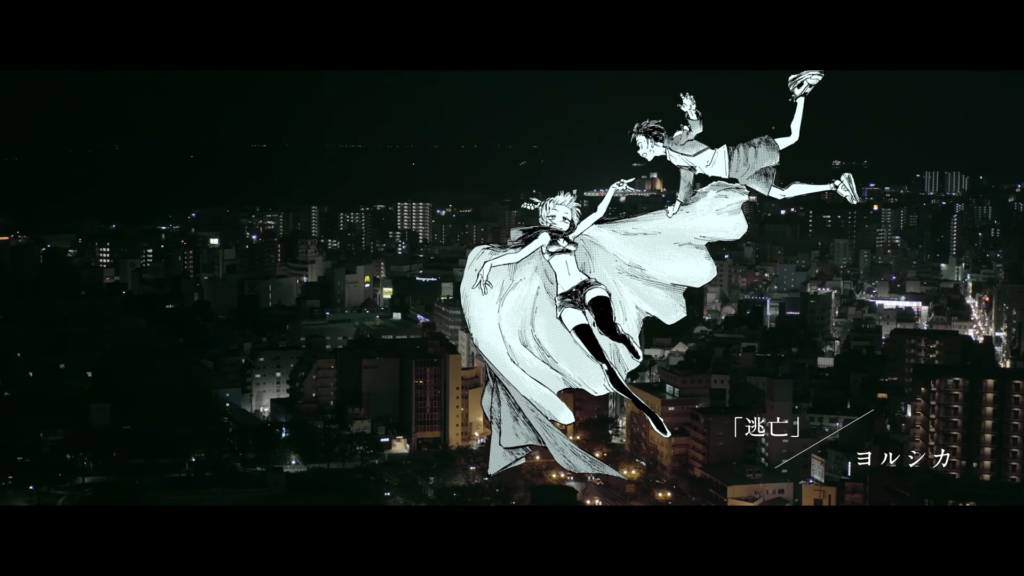 Dagashi Kashi creator Kotoyama’s latest series in Weekly Shonen Sunday, Yofukashi no Uta, is a love comedy all about night owls wandering the Tokyo metropolis under the cover of darkness. That, and vampires. Coming in English next year courtesy of VIZ Media under the title Call of the Night, the series has been slowly building up for itself a solid fanbase, as evidenced by its recent inclusion in the Tsutaya Comic Awards. Now, the series has teamed up with elusive rockers Yorushika for a special Yofukashi no Uta PV to celebrate the series’ latest 4th collected volume and allow viewers a little bit of wanderlust in this time of confinement.

Utilizing the song ‘Toubou (Run Away)’ by Yorushika and the art that appears in the series, this Yofukashi no Uta PV sees main characters Nazuna and Kou, among others, wander the real-life night-time streets of Japan. Footage for the PV was captured all over the country by various collaborators and really brings the essence of Kotoyama’s series to life. You can check it out below:

This Yorushika PV isn’t the first time that Yofukashi no Uta has teamed up with a music artist. Late last year, alternative rappers Creepy Nuts created a song named after the series for a PV that focused more on story. Yet, I dare say that this Yorushika collaboration is much more apt – and not just because the names are very similar.

Obviously, in this time of self-isolation and quarantine, there is something quite cathartic about watching videos of real-life locations. You can almost live vicariously through the superimposed images of Nazuna and Kou as they wander in a way that many of us can’t right now. This is something that publisher Shogakukan is quite aware of, as it says in the video description that this is “a PV depicting summer nights that you can enjoy even from home.” Hard agree.

Kotoyama also shared his thoughts on this new Yofukashi no Uta PV via Twitter: “Yorushika’s song is so freaking good that it’s almost too good.” Big mood.

Yofukashi no Uta will be released in English next year.