Studio TRIGGER, whose movie Promare is still fresh in our memory, has started broadcast and Netflix streaming of their latest TV anime, BNA: Brand New Animal. The story follows Michiru Kagemori, a former human who one day suddenly became a Tanuki Beastman, and her travels through the Beastman-inhabited special ward of Anima-City. Today we sit down with director Yoh Yoshinari, whose previous directorial work was Little Witch Academia.

OTAQUEST: How did you come up with the concept behind BNA: Brand New Animal?

Yoh Yoshinari: Originally I didn’t have much time to come up with a concept. When asking for some ideas, someone mentioned: “Why not do something like Osamu Tezuka’s Marvelous Melmo?” I thought “If I’m going to do something from Osamu Tezuka, I’d rather do something more akin to The Vampires, something that has more of an edge.” That’s where the original concept came from.

OTAQUEST: What kind of interactions did you have with series writer Kazuki Nakashima?

Yoh Yoshinari: First, I started off by writing what it was I wanted to do with this series and sent that to Mr. Nakashima. In that initial draft, I had included beastmen, or rather the idea of transformation. However at the time, there wasn’t any sort of concrete story, so I asked Mr. Nakashima to write one. On the other hand, Mr. Nakashima seemed to have had a desire to describe a city, or rather the society that governs it. Mr. Nakashima mentioned the name of the non-fiction book Lupo Kawasaki, written by Ryo Isabe whose setting was inspired by the southern part of Kawasaki City. Then, based on the idea proposed by Mr. Nakashima, I made it line up with what I wanted to do.

OTAQUEST: How did the main character Michiru Kagemori come to be?

Yoh Yoshinari: We tried to keep Michiru as normal a person as possible. If she has set motives from the very beginning she becomes this special character, which takes away from the spotlight shone on the story. In that way, I was trying to make her a different character to Akko from Little Witch Academia. However, while working with Mr. Nakashima, she ended up having certain traits that are similar to Akko’s. 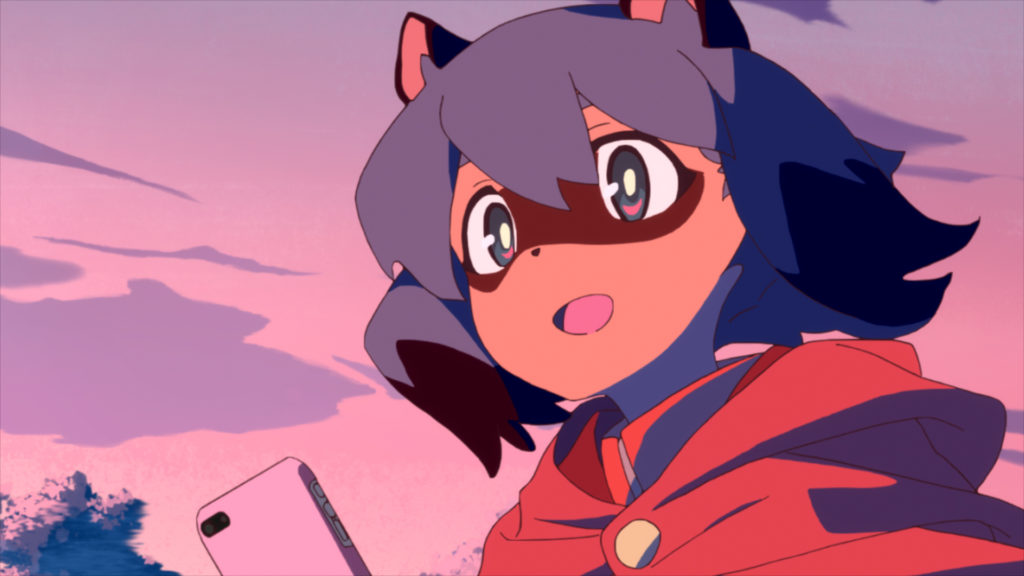 OTAQUEST: Where did you get the idea to make Michiru a Tanuki Beastman?

Yoh Yoshinari: I don’t remember at all (laughs) Tanuki are animals that are central to Japan and are only known to a portion of Asian countries, so they aren’t exactly known worldwide. There was the thinking that maybe having her be a raccoon would be a better fit, but I thought it might be more interesting if we had her be an animal more specific to Japan. Therefore, I thought it’d be nice to have it written as “tanuki” when localized in English. The reason Nazuna was decided to be a fox was also to match Michiru being a tanuki. (Editor’s Note: In Japan, there are many old tales and fairy tales in which tanuki and foxes are paired together)

OTAQUEST: Michiru, like Akko, is a girl in her teens.

Yoh Yoshinari: Being someone that hasn’t joined society yet and doesn’t really know anything, I thought it’d be perfect for them to be protagonists. That way the viewer can experience the world is the same way the character does. However, since the setting was a bit more complicated this time, it took quite a while to show Anima-City and the circumstances surrounding it through Michiru’s eyes. From the first episode to the third episode, I feel that I was showing each and every element that constitutes the society of Anima-City.

OTAQUEST: I think episode 5, Greedy Bears, was especially impactful considering it took place in a relatively early stage of the story.

Yoh Yoshinari: Episode 5 was written to be the first episode where Michiru’s motives are created. It’s a more interesting and prominent turn of events than I had expected, but it’s also an important story from a drama perspective. In the future when a crisis comes to Anima-City, in order for Michiru to want to protect the city she has to first have a relationship with the people that live there. It’s in Episode 5 that I tried to make those points more visible. Up until the fourth episode the story was largely revolving around Michiru, but from the 5th episode onwards I wanted to make the story grow and expand from there. 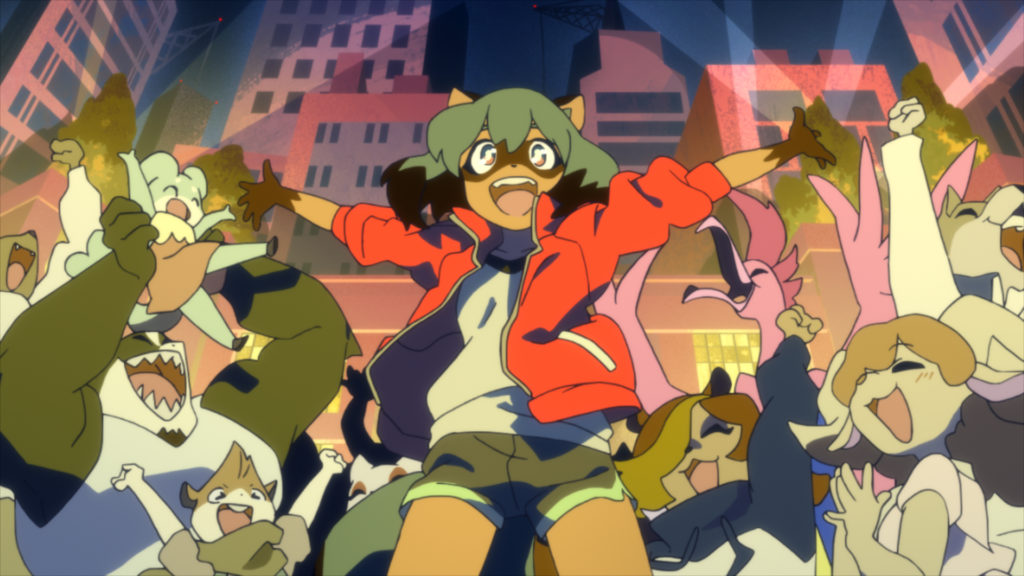 OTAQUEST: What were you aiming to create with Ogami?

Yoh Yoshinari: Ogami was set out to be the exact opposite character to Michiru, which would act as a sort of wall for her. He’s a strong male with a hard-boiled personality and not a sign of femininity in him. In Anima-City, not only is there the administration, but also Sylvasta Pharmaceuticals, and the religious group Church of the Silver Wolf all co-exist as a three-pronged state. Ogami, rather than be this bastion of justice, is more trying to maintain the general order of things by maintaining the balance between these three powers.

OTAQUEST: Was there anything you were acutely aware of while drawing the world of the beastmen?

Yoh Yoshinari: The genre of animal humans is very much already a thing, and is done in various works by drawing animals differently to the images we have of them and giving these characters individuality. We didn’t want to go against the grain there. However, what I did want to do was to bring together the stereotypes and the characteristics of each animal, and draw that. For example, we chose to draw Ogami especially werewolf-like, and then draw Michiru to point out what was wrong with that stereotype. Conversely, I wanted Michiru to break down those established stereotypes.

OTAQUEST: How influential was Genice Chan and her concept art in creating the look and feel of the world?

Yoh Yoshinari: This time, in order to find staff who could create the image of Anima-City, we looked overseas. Chief among those we saw was Genice, whose work we liked the most. The majority of scenes have, in one way or another, her input. Among them is her sense of color. For example, in the first episode, Genice’s vision is strongly reflected in the pink color at dawn, and in the red and blue areas behind the alley that Michiru and Ogami argue in. At first, I was only planning to request the art related to the image board, but I ended up asking her to also work on the original draft of the characters. 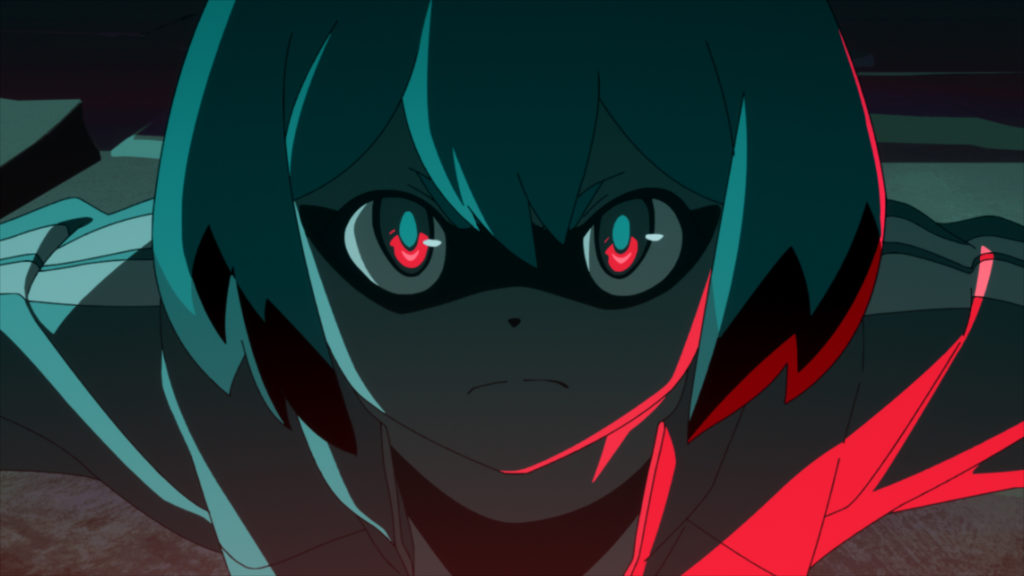 OTAQUEST: The ending was directed by GiantAnt, with help from Genice.

Yoh Yoshinari: there was the suggestion that the company Genice works for could produce an ending, so I asked them to do it. Typically asking another company overseas to produce isn’t something that’s done, but we were under heavy constraints and the prospect of it seemed interesting. I didn’t make any sort of detailed request, I just told them to make something that has their own sense of originality.

OTAQUEST: This is your second time directing a TV series, has any of the experience from last time stayed with you?

Yoh Yoshinari: Little Witch Academia was for two seasons and BNA is for one season, so I thought it might be a bit easier, but I was mistaken. When we worked on Little Witch Academia we had a lot of staff who were director-level working on the project, so there was a lot of help there, regardless of my abilities as a director. This time I feel like I was made aware of that fact. It felt more like this time, with the help of Mr. Hiroyuki Imaishi and TRIGGER President Masahiko Otsuka, we were able to manage and get by.

OTAQUEST: Currently, up to episode 6 has been released on Netflix (in Japan). Can you tell us any highlights or developments we should keep an eye out for looking forward?

Yoh Yoshinari: Mr. Nakajshma is really good at packing many things into the story, so I feel there might have been too many elements that I’ve added. However, as with any of Mr. Nakashima’s plots, There will be many rapid changes in the second half of the story. Lots of unexpected developments, and things that will make you say “Wait, what? This is how it’s going to play out?”. I hope you can look forward to it.