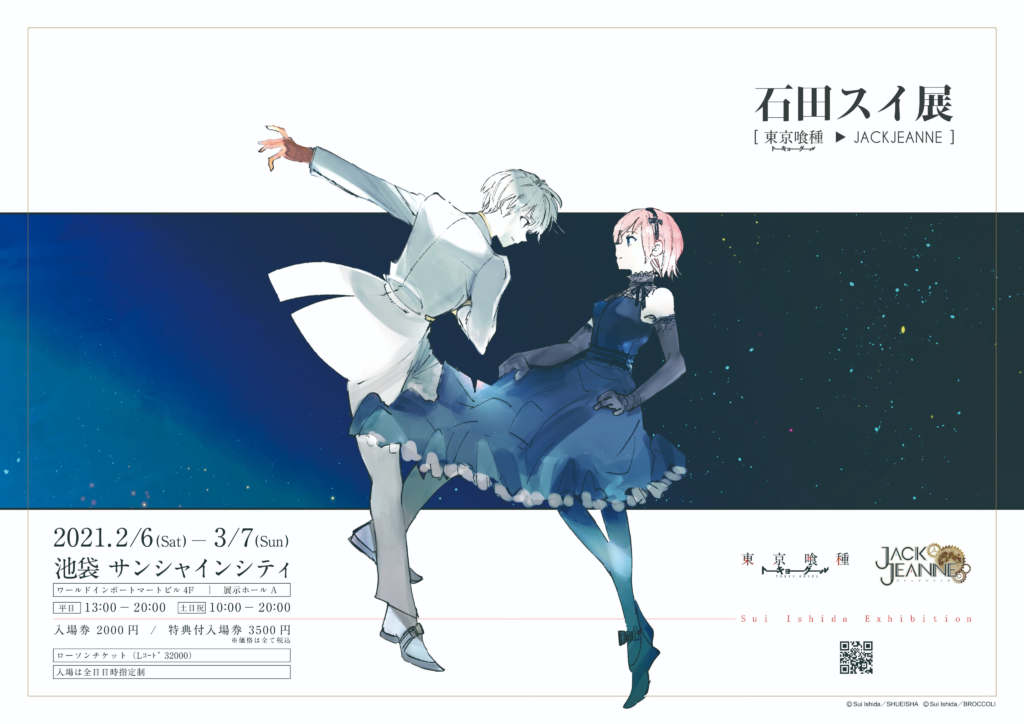 The upcoming month-long art exhibit, very directly titled ‘Sui Ishida Exhibition: Tokyo Ghoul > Jack Jeanne‘, looks to be a grander event with each passing bit of information that unravels (hint hint). Announced over six months ago now, the event set to display Ishida’s uniquely striking art (old and new) will finally come to Ikebukuro’s Sunshine City Exhibition Hall on 6 February through 7 March. Immediately after, though, it’s traveling to Fukuoka for a whole additional month. Not only will it provide fans with an intimate look at the March Bishoujo game illustrated and conceived by the Tokyo Ghoul creator, but fans will also get to rejoice in a new remix of the anime’s iconic opening ‘Unravel‘ by TK From Ling Tosite Sigure made for the festivities. Yes, the ‘From Ling Tosite Sigue’ is part of the name.

The ‘Unravel‘ remix specifically comes from the in vogue, and rightly so, Yorushika’s producer and composer n-buna, but both names will be used in said remix. As visitors come to the Tokyo Ghoul exhibition, they’ll be greeted by song and an original video presentation. As if Ishida’s equally beautiful and chaotic illustrations weren’t of a draw, now your ears have a reason to roll through too. Though, we hope they put the song alone sooner rather than later.

Independent of if you like Tokyo Ghoul (though you really really should) ‘Unravel’ dominated as arguably the second biggest anime opening phenomenon of the 2010s, just behind the original Attack on Titan opening. You can still see spirited edgy youth Tik Tokking it to this day! Yorushika won themselves a lot of fans over the last couple of years with their playful melodies and artful aesthetic, and just the idea of getting to hear their (producers’) version of the song read as a pure genius idea. Kudos to whoever made it happen.

You can catch Sui Ishida’s Tokyo Ghoul exhibition with the Yorushika ‘Unravel’ take from February in Tokyo and March in Fukuoka.