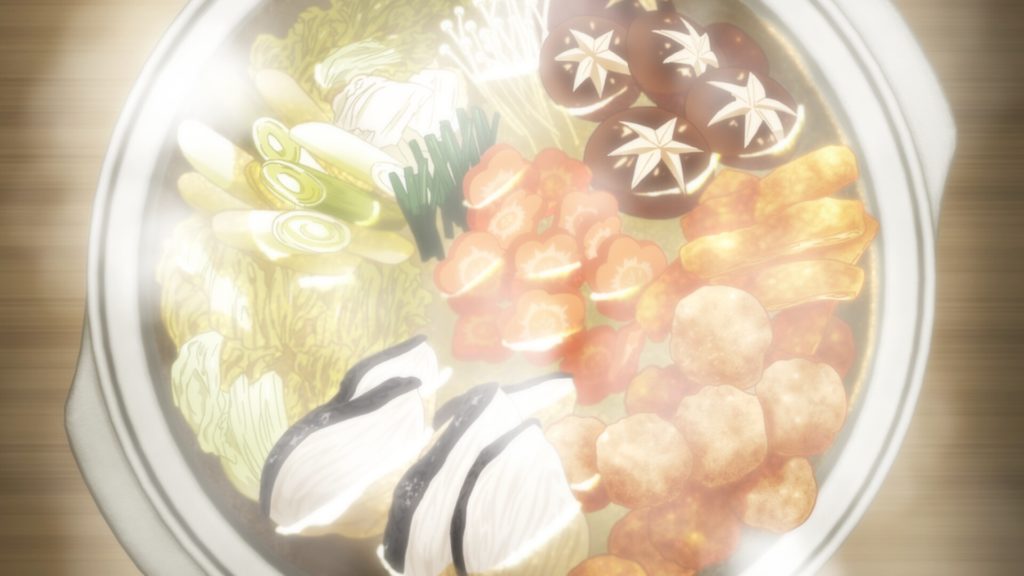 The Art Of Animating “Delicious”: Interview With Yoshiaki Ito Pt. 1

Watching anime, there’s something one comes to realize. Why is it that animators always strut their stuff when there’s food on screen? Unlike anime characters, who always have screentime, food is destined to disappear in just a few bites… much like real life. Even so, anime creators ensure their characters’ meals look as appealing as possible, almost as if to compete with one another. According to our investigations, the foremost thing on the minds of visitors to Japan is “Japan’s food”. It’s likely that many of them feel an affinity for “Japanese cuisine” through a major facet of Japanese pop culture, anime. In this project, we seek to understand the relationship between Japan’s food and its anime.

The 2015 anime “Gourmet Girl Graffiti” (a Shaft production) is a heartwarming tale about an ordinary high school girl and ordinary home cooking, but the anime drew attention for the extraordinary detail it gave to both the food, and the reactions to the food. However, there’s a key figure behind the establishment of this anime’s depiction of food. Amongst the credits, one finds the unique position of “Cuisine Coordinator”, given to Yoshiaki Ito. Just what kind of job is this? We asked him about his work and the process that brought about this depiction of food.

OTAQUEST: Can you tell us the story behind what created this unique position, and how you came to be in charge?

Yoshiaki Ito: I first recieved an offer from our company (Shaft) president, Mitsutoshi Kubota. The food design was a critical part of “Gourmet Girl Graffiti”, so the idea was that by giving someone a specific task like this, we could ensure the quality of food representation throughout the entire series. The “Cuisine Coordinator” position title was also an idea from Mr. Kubota. (laughs) I remember him saying “Food Director’s just so boring. I know, how about Cuisine Coordinator? It’s like something you’d see in a robot anime”. (laughs) I was rather taken aback myself at the time, but everyone thought the name was funny, so I had to accept his cleverness. (laughs)

OTAQUEST: Including this 2015 project, you were involved as a character and general design director for “Hidamari Sketch”, and have a colorful career in general. Were you often put in charge of the art direction regarding food?

Yoshiaki Ito: That’s right. Cooking scenes tend to take a lot of effort and time, so whenever they came up in a TV series, they were passed along to me. (laughs) I think it’s that kind of history that brought me the title of “Cuisine Coordinator.” In the past, I believe depictions of food always involved getting real-life research materials from planners, who would tell animators to “make it look like this.” If food only showed up every once in a while, that would be fine, but as it was in this series, there are anime where many kinds of food will show up every episode, and animators will all give their personal takes on what the food should look like when drawn. It makes it difficult to unify their approaches and use of color. That’s why someone has to come up with rules and final designs for the materials. That’s what “Cuisine Coordination” is about.

OTAQUEST: Could you show me an actual example of a final design?

Yoshiaki Ito: (pointing to the graphic) Here we have some omurice, the egg part, the toast marks, the chosen colors and highlights, and the sauce, all broken up into different layers. After applying color, we render it all to complete the frame. The picture comes together by carefully following these steps, but it was difficult to get the first seal of approval from Director Shinbo (Akiyuki Shinbo, Director). Every dish started with him saying “It doesn’t look all that delicious like this”, but his only advice ended up being like “Hmm… it’s not quite there yet”. (smiles wryly) So I’d end up returning to the source material with color key artist Watanabe (Yasuko Watanabe) and cinematographer Aizu (Takayuki Aizu) to trial-and-error our way through the colors and photography methods, and I’d have to have processing textures created and modified. It was touch-and-go from the beginning, so I took a heavy hand to each frame back then, but apparently that didn’t get the “depth” we needed, so I upped the number of layers to a fair amount and added processing methods to each, which finally got the director’s seal of approval.

OTAQUEST: I see, drawing something as a single image didn’t get enough depth.

Yoshiaki Ito: That’s right. Without enough layers, we couldn’t adjust colors or lighting effects individually, so at the beginning, it was all about adding layers to layers.

OTAQUEST: So to summarize the explanation up to now, with only real-life photographs to work from, each animator applies a different point of view and drawing style, creating discord. That would create a lot of work for the animation director to smooth over, so that’s where your “cuisine coordination” came in to direct the appearance of food. Did you show the animators these sorts of design diagrams?

Yoshiaki Ito: Yes. Each design diagram was approved ahead of time before being distributed, so it took more work than most productions, I think. Modern productions are too detailed to fix color over a whole frame, so I’m confident that other companies are also dividing things into layers and processing each of them.

OTAQUEST: Just as your “Cuisine Coordination” didn’t exist until recently, I feel like these breakdown methods are setting a new style for the current age of anime production.

Yoshiaki Ito: You can see any number of stills online, but until recently these sorts of diagrams didn’t make it into the open much. They’re really the product of trial-and-error with Watanabe and Aizu. I’m confident that the animators grasp design documents and regular old photographs in a different manner. It’s got to be easier for them to start with drawings rather than pictures. Whether or not scorch marks become additional lines or color tracing will vary between animators.

OTAQUEST: What do you personally think has led Japan’s anime industry to put so much effort into their depictions of food in recent years?

Yoshiaki Ito: I think there have always been productions with great scenes of food. This is my personal opinion, but I think the Internet has had much to do with this. In the past, each new cooking scene would require you to go out and buy books or magazines or head to the library to find source material. It was difficult to find just the right kind of picture for the food you wanted to draw. But now we have easy image search, and even videos showing how to make all kinds of dishes. This wealth of documentation has had a huge effect on animators. Then there’s the physical technology. Even smart phones can easily take slow-motion video, so some people use that in their research. Cameras back in the analog days weren’t that flexible.

OTAQUEST: It must be useful to have video to replicate the spread of a cut omelet.

Yoshiaki Ito: That’s right. People these days will upload videos of omurice being split at restaurants these days, and you can search all of them until you find what you feel “looks tasty.” You’ll find really clean splits from video taken with professional chefs. Such research tends to make one hungry, so it often leads to going out to eat some research of your own. (laughs)

Yoshiaki Ito: I’d pass my drawings to Watanabe, who would pick and fill in colors to suit her preferences,  then we’d print it off for further input and texturing from end-product artists and camera experts. There’s a whole lot of entrusting work to other departments and their various skills.

OTAQUEST: So before color tests like that, it’s you who draws the line-art. Do you have an idea for what colors to use by that point?

Yoshiaki Ito: That’s right. I use reference photographs to figure out which parts to highlight, and which colors to leave out. This is my own way of working, but I actually try turning the reference photo monochrome. From there, changing the saturation and brightness helps me figure out how to setup my breakdown diagram.

OTAQUEST: I see. That makes it easier to figure out where to use darker and lighter colors. So once the designs are approved, the food scenes are animated. How to things proceed from there?

Yoshiaki Ito: I split the “Cuisine Coordinator” role with Hirotoshi Arai, with me taking the odd episodes and him taking the even-numbered episodes, and we touched-up the food scenes in the episodes we were each responsible for. We also told keyframe animators about what layers to use from the diagrams. For very short cuts, it wouldn’t be worth drawing in every little detail.

OTAQUEST: As “Cuisine Coordinator”, what did you fix most of the time?

Yoshiaki Ito: The core of our work goes beyond the food. We have to work on the animations for any scenes of eating. Our number of fixes depends largely on the number of keyframes our animators can draw. With enough of them, it because easy enough to imagine the final result, and we’ll only have to make periodic adjustments, but when we’re handed poor-quality stuff, we sometimes have to re-draw the frames from scratch. 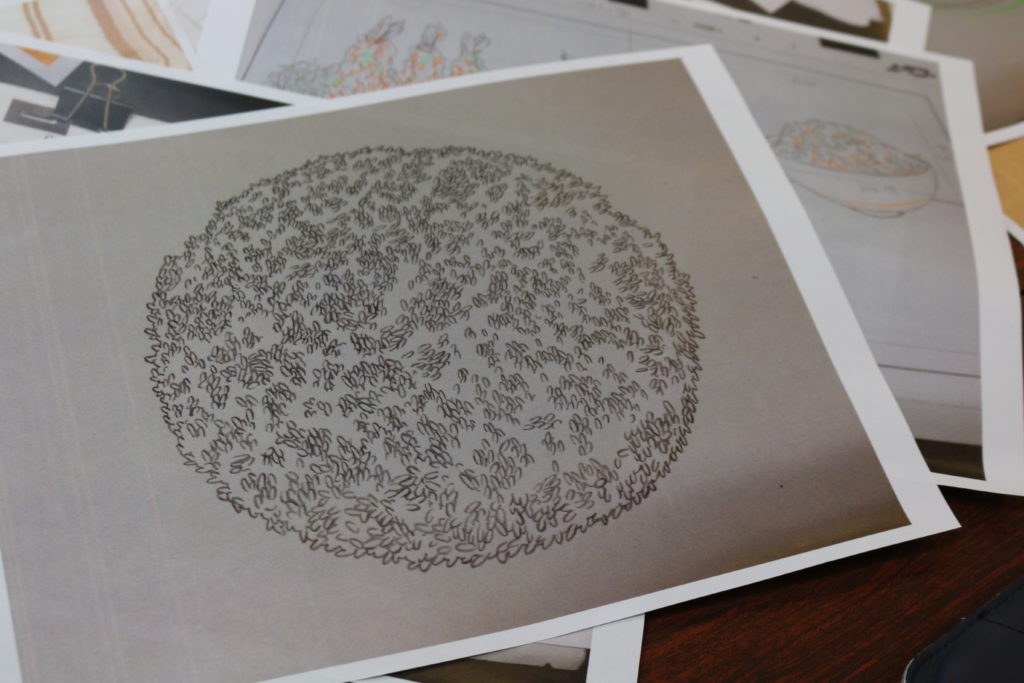 OTAQUEST: It must be a difficult to task to judge what needs fixing. There’s no need to fill in all of the whitespace here, but this, at least, needs to be drawn.

Yoshiaki Ito: That’s right. Without enough lines, you can’t tell that the rice has individual grains. Talented animators probably won’t need to go this far. Many of them pick points to form lines and shadow that have much of the same effect. Good keyframe animators will perform a lot of subtraction, and if they’re good enough, then their frames will be approved. I’m not the best at that kind of abstraction, so I can’t keep myself from scratching in the details.

OTAQUEST: Were there any animators who were tasked with mostly food scenes?

Yoshiaki Ito: As I recall, Mina Ootaka was like that. In the first episode, she was responsible for the scene where Kirin eats soba-flour udon noodles, but the movements were so good, Suzuki (Ryosuke Suzuki) on the production staff asked her to work on the important scenes for all the other episodes, I believe.

You can read the second part of this tasty interview here!

Animator and character designer for Shaft. Debuted as a key animator for “Thumbelina: A Magical Story” (1989-1992). Animation Director for titles such as “Mahoromatic”, “And Yet the Town Moves”, “Puella Magi Madoka Magica”, the “Monogatari” series, and character designer for titles such as “Gakuen Alice” and “Hidamari Sketch”.  In “Gourmet Girl Graffiti”, he became the anime industry’s first “Cuisine Coordinator”, working with color key artist Yasuko Watanabe and cinematographer Takayuki Aizu to ensure food depicted in the production looked “delicious.”