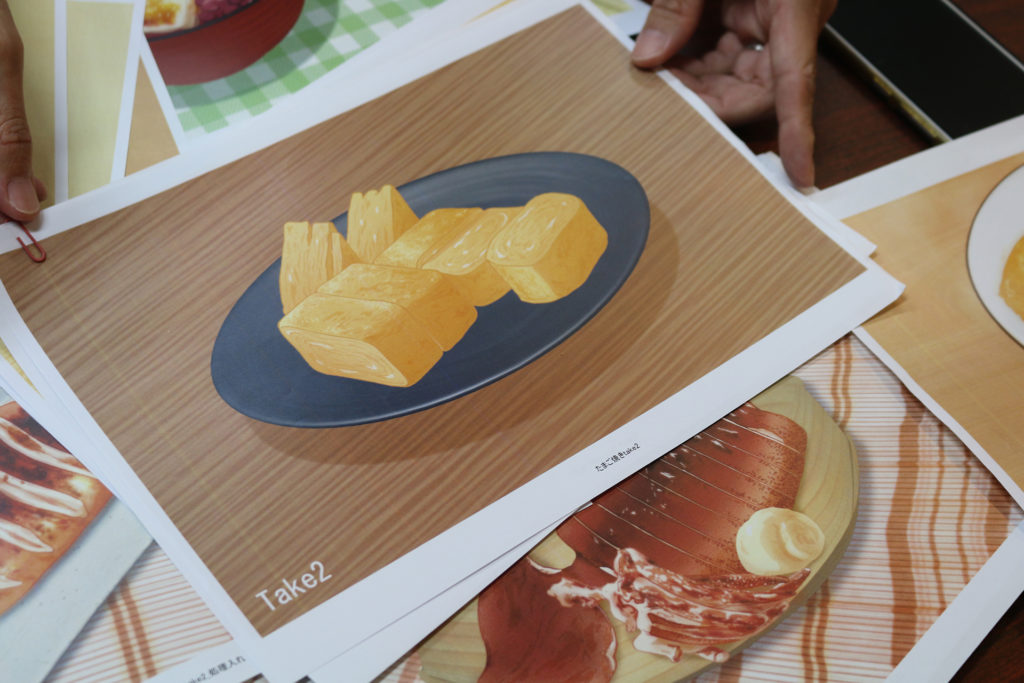 The Art of Animating “Delicious”: Interview With Yoshiaki Ito Pt. 2

As we learned in the previous segment, it took a surprising amount of trial-and-error to bring about the food scenes of “Gourmet Girl Graffiti.” In this latter half, our guest Yoshiaki Ito tells us about the real heart of drawing food scenes. Drawing appealing meals requires far more than a single, detailed image: the act of eating also requires great attention. What surprising “food anime” does Mr. Ito mention regarding this?

OTAQUEST: What do you pay close attention to when drawing scenes with food?

Yoshiaki Ito: As detailed as I’d like to be, the biggest thing I watch out for is the schedule for the TV series. Delaying things puts pressure on the touch-up artists and cinematography. At Shaft, people tell of a certain legend. In a series’ second episode, there was a scene with a rolled egg omelet that, with all its layers compiled, went from layers A, B, C…. to Z… then ZA… all the way to ZF, and had thousands of frames in just one scene, and the production staff were angrily told to reduce the number of frames they were using. (laughs)

OTAQUEST: For character and robot design, experience tells us how to estimate how many lines or stills will be necessary, but when it comes to food design broken into layers, people accidentally put too much effort into it. (laughs)

Yoshiaki Ito: That’s why we used lots of layers for close-ups of food, even more so than we had planned on, but reduced layers to two or three when the scene put the food distant from the camera.

OTAQUEST: Has there been any change at the studio regarding the design of food scenes since “Gourmet Girl Graffiti”?

Yoshiaki Ito: I handled a scene where Rei from “March Comes in Like a Lion” eats a pork cutlet bowl, and I made sure that people used “as few layers as possible”. (laughs) This was a different series, and if keyframe animators put too much effort into the layering, the other animators wouldn’t be able to keep up with the in-betweening like those who worked on “Gourmet Girl Graffiti”. So we kept the food to two or three layers for “March Comes in Like a Lion.”

OTAQUEST: Lately, there’s been some talk in Japan of a certain “food anime.” It’s “Cinderella Chef”, produced by Hangzhou Wawayu Animation, a Chinese studio. What did you think upon seeing it?

Yoshiaki Ito: It was a shock when I saw it. Chinese studios have long been involved in the production chain of Japanese series, so it’s no surprise that big talent is emerging from China. Our company isn’t the only one accepting interviews with people who have graduated from animation schools from outside of Japan, but even amongst their young ranks, many of them have drawing talent that astounds. That brings me back to our discussion of documentation. For my generation, we had to look to videotape to see awe-inspiring animation, but young people these days can see movies from great animators all over the internet, and even breakdown diagrams, timesheets, and publications are a click away online. It’s truly become a remarkable environment, I think.

OTAQUEST: One thing that made “Cinderella Chef” look delicious was how it brilliantly colored its Chinese cuisine and ingredients with strong colors that might be muted in Japanese cuisine. What other points are there to making something look delicious?

Yoshiaki Ito: I feel that one’s first impression, the first frame of the food is something special. It’s astounding how detailed each frame of the animation is, the number of colors. Anyone can tell how much effort was put into it, and I think that’s important. And as important as it is to make the food itself look good, the motions involved with eating it, if it looks delicious to those eating it, is just as important to making something appear even more delicious.

OTAQUEST: Like how you can stylize the eating of things like rice bowls in anime to look cleaner and more delicious than how someone might eat it in real life. What’s your thought process for these kinds of eating motions when you’re animating a scene?

Yoshiaki Ito: This is a huge throwback, but I realized something watching the food scenes in “Manga Nippon Mukashi Banashi.” This series truly was some old-fashioned animation and compared to modern productions, there wasn’t much to say for its colors and scene complexity, but the scene where some simmered daikon radish is eaten really looks delicious. That means that the appearance of deliciousness, as I see it, requires just as much good animation and voice acting. Thinking back on my memories from childhood, everyday scenes of eating in World Masterpiece Theater from Nippon Animation looked delicious to me. That shows how important the processes of storyboarding and direction are.

OTAQUEST: Of all your past series, which food scene is most memorable to you?

Yoshiaki Ito: There used to be an anime about kids making new forms of sweets and food called “OH! MY Kombu” (1991), but every new food in that series was first cooked up in real life by us animators. (laughs)

OTAQUEST: That makes sense. As you said, you didn’t have the cooking videos of YouTube back then, and you probably wouldn’t find what you were looking for in a library. (laughs)

Yoshiaki Ito: No kidding. (laughs) That idea came from the directors. As it turned out, none of it tasted all that great. (laughs) But it was an interesting experience. (laughs)

OTAQUEST: What about food scenes from anime you’ve seen?

Yoshiaki Ito: When I got involved with “Gourmet Girl Graffiti”, I touched upon all kinds of food anime, but among them, I was astounded by how delicious the oden in “Hoka-hoka Oden no Uta” (a LAWSON commercial for oden in 2017) appeared despite how few colors it used. It was produced by Shingo Yamashita, who was involved with series like “NARUTO”, the kind of animator that puts in a lot of movement with great action and form. As simple as his drawings were, they looked amazing. I couldn’t help but think, talented people, can make anything look great. (laughs) I already mentioned World Masterpiece Theater from Nippon Animation, but there’s also the sukiyaki scene from the 145th episode of the second “Lupin the Third” series, directed by Hayao Miyazaki. These days I’m often impressed with the motion from Kyoto Animation productions.

OTAQUEST: So in the end, character motion is important?

Yoshiaki Ito: That’s right. Every single frame could look incredible, but if the motions don’t look right, it will leave viewers feeling put-off. To go all the way from grasping one’s chopsticks, flipping them over, and eating with them, is a pain to animate. But watching Kyoto Animation’s productions, you’ll find each series puts a great deal of effort into these motions. “CLANNAD” is good too, but I want to point out how cute “Kanon” depicts the character of Shiori eating curry with a spoon. Her return of the spoon to the plate was also well done. Good animators always surprise you with good motions you might not think up yourself. There’s also the importance of scale: it would be strange for a bowl to be minuscule in one’s hand. For an animation where someone is drinking water from a cup, if the water level doesn’t match their mouth, that would also look weird. This applies to studios with more realistic depictions too, like Production I.G. Everyone polishes it like it’s the natural thing to do, so viewers might not realize it, but I can’t help but marvel at animations like these.

OTAQUEST: I see… As important as the appearance of the food is, the motion is critical. So, even if the food looked great, you could ruin the whole deal with poor motion quality?

OTAQUEST: Like, it would be strange for a character who normally eats with poise to suddenly start pigging out.

Yoshiaki Ito: That’s right. The motions have to match the character. That’s tough for realistic depictions, but it can be funny to show a gap in character by suddenly jumping to “pigging out”.

OTAQUEST: As an animator and artist, what do you think is fun about drawing food in animation?

Yoshiaki Ito: As for me, I find satisfaction in getting viewers to feel like “that looks good” or “I’d like to eat that.”

OTAQUEST: We at OTAQUEST intend to go on explaining that makes Japan’s “cuisine anime” great to people around the world. Thanks for talking with me today.

Animator and character designer for Shaft. Debuted as a key animator for “Thumbelina: A Magical Story” (1989-1992). Animation Director for titles such as “Mahoromatic”, “And Yet the Town Moves”, “Puella Magi Madoka Magica”, the “Monogatari” series, and character designer for titles such as “Gakuen Alice” and “Hidamari Sketch”.  In “Gourmet Girl Graffiti”, he became the anime industry’s first “Cuisine Coordinator”, working with color key artist Yasuko Watanabe and cinematographer Takayuki Aizu to ensure food depicted in the production looked “delicious.”