Yoshitaka Amano: The Name of the Concept Art Final Fantasy 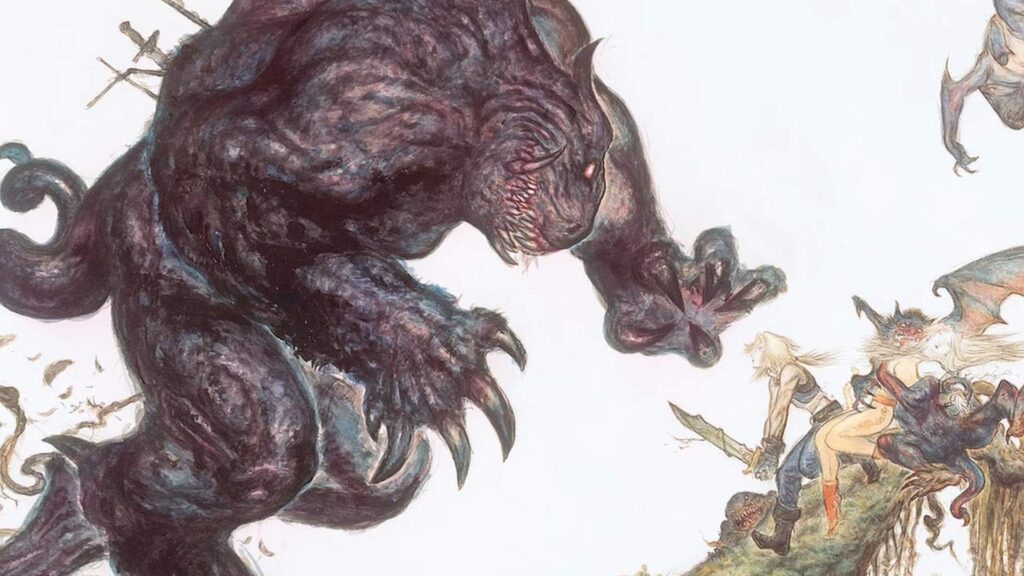 If you’ve ever seen the cover art or logo of an early Final Fantasy game, you are probably familiar with the watercolor painting-like illustrations that adorn them. These are the work of Yoshitaka Amano, a Japanese illustrator who has done concept art for Square (before they were SquareEnix) since the 1980s and had beforehand enjoyed an extensive career as an illustrator, creating many well-known anime characters.

Amano’s signature style is best characterized as a combination of watercolor painting and ukiyo-e – woodblock paintings from Japan’s Edo period. Traditionally, ukiyo-e paintings have featured portraits and characterizations of Japanese men and women, or sometimes folklore concepts; as Japan was still mostly closed off to the rest of the world during this period, the source material and inspiration was limited.

However, Amano has blended this style with science fiction and comic influences as he gradually became exposed to them. The result is a unique, modern take on an important part of Japanese art history and culture.

Westerners Know Amano Mostly Due to Final Fantasy, but Amongst his Earlier Works are many Anime Icons

Amano got his start at Tatsunoko Productions, working on the iconic anime Speed Racer, and later on Gatchaman and Tekkaman, among a long list of titles throughout the 70s. While at Tatsunoko, Amano was constantly exploring different forms of art throughout history to refine his personal style. During the 70s, he studied turn of the century European Art Nouveau, which undoubtedly added another layer of complexity to his illustrations moving into the 80s.

As Amano moved into freelance work, he ended up focusing on the fantasy genre. In the first half of the 80s, he did the illustrations for the Vampire Hunter D series of novels, written by Hideyuki Kikuchi, and character designs for the anime movie adaptation of said series which came to be well known in the West during the 90s as the popularity of anime began to spread at a rapid pace. It was in the late ’80s that Amano joined up with Square.

Final Fantasy was an ambitious project, said to be Square’s potential last hurrah at the time, but was met with immediate positive reception and invigorated the company. The continued success of the franchise meant that Amano would become a household name in the world of video game illustrations for several years to come. Amano continued to do promotional art and character concept art for each of the Famicom and Super Famicom games.

Following Final Fantasy VI for the Super Famicom in the mid-90s, Amano took a less active role in the artwork of Final Fantasy, however, he continued to provide promotional artwork and the logo art for subsequent Final Fantasy games. The logos, in particular, are a part of Final Fantasy that will forever be Amano’s brainchild.

Amano Eventually Collaborated with Writers in the Western World

As the 90s progressed, Amano became more involved with the West, and his work began to gain recognition with new audiences through international exhibitions. This would signify the beginning of an era where Amano would find himself collaborating with a number of different creators seeking his unique illustrations found all throughout the world.

In 1999, Amano did the artwork for The Sandman: Dream Hunters, a novella that was written by Neil Gaiman and published by DC Comics (under the Vertigo label), including 8 pages worth of illustrations in a gatefold.

The work went on to win the Bram Stoker Award for Best Illustrated Narrative for that year and was also nominated for a Hugo Award. Amano would also illustrate a work for Marvel Comics in the coming years: a series of graphic novels under the title Elektra and Wolverine: The Redeemer.

Amano has always worked with a degree of freedom that has allowed him to take on many different projects and work with people from many different industries, and he has often remained close to those he has worked with, in a professional capacity.

Hironobu Sakaguchi, the creator of Final Fantasy, has called upon Amano many times in recent years for various projects here and there. One of Sakaguchi’s recent projects, a mobile game called Terra Battle launched a campaign that promised additional content as the game reached download milestones, featuring different types of content from different creators.

For the 1.5 million download mark, Amano did the artwork for the character Invincible. To this day, he continues to provide promotional artwork for Square, including for some of its mobile titles, like Final Fantasy: Brave Exvius.

Even though he got his start in Anime, his artwork has transcended something that could fit into such a broad category, and he has established himself as one of the most well-known artists in the modern world.

In 2019, Amano even collaborated with Wizards of the Coast of Magic: The Gathering fame to produce alternate art for the Liliana, Dreadlord General Planeswalker card that appears in The War of The Sparks expansion set.

The alternate artwork version of the card appears in the Japanese release of the set, although the standard art is also present, so pulling Amano’s version is not a guarantee. This does make the card rare, but if you ever needed proof of Amano’s fame, just look up an eBay listing for the foil version of the card; it is often listed for $2000 USD or more!