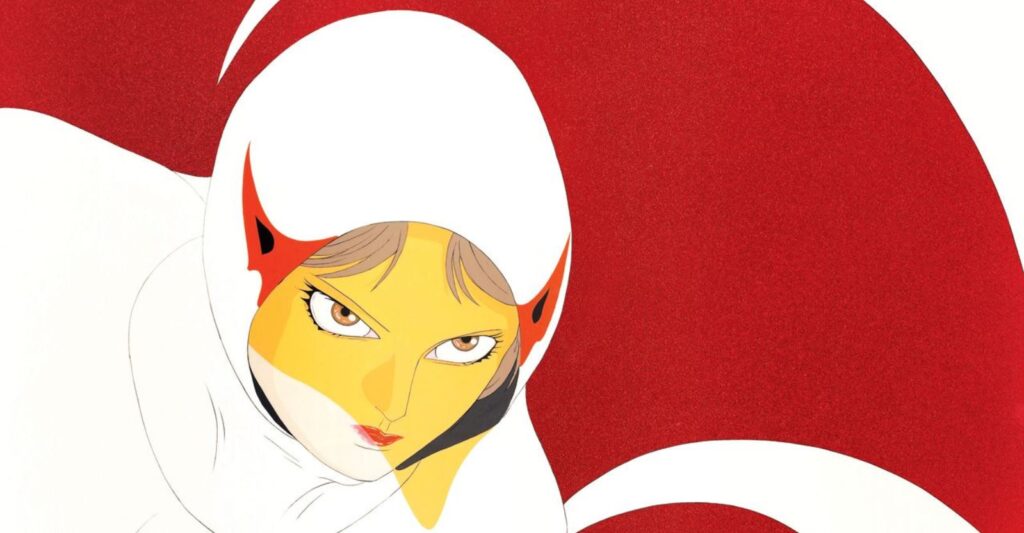 When I was first seriously getting into anime (and by seriously I mean making the leap from passively watching Toonami shows to discovering unforgettable dreck like Love Hina) my well-meaning father surprised me with a Yoshitaka Amano Gatchaman artbook. Being but a pre-teen in the year 200X, and well before I’d become an occasional Japanese Pop Culture writer in 2021, I had no idea that Yoshitaka Amano was the Final Fantasy illustration giant, much less Gatchaman being a foundational anime. Chances are my Dad went to some specialty store and asked for a gift recommendation, the sweetheart. While 1X-year-old me could only appreciate the gift for all its cool pictures, now-me retroactively appreciates that gift more than ever knowing its history, and you should too! Well before Yoshitaka Amano became the front-face of Final Fantasy and worked with the likes of Neil Gaiman, he sure was helping make anime.

Yoshitaka Amano spawned a richer and more varied career than most artists and animators, the most recent addition being a particularly sophisticated rendition of the DC Movies take on Joker’s lover Harley Quinn. While he was never a manga artist, Amano’s illustration of a DC character brings him back to his roots, as early on he cited Batman artist Neal Adams as a huge influence, often buying books just with his cover art. He got his start in anime working on the Speed Racer, and from there, his career raced through TV animation, character design, book illustration, and eventually concept art for Square Enix. Now, he gets to live life as a cushy freelance illustrator who puts on exhibitions all over the world, but that’s what happens when you create a wholly unique art style that only got more awe-inspiring as it evolved. Keep in mind though, even the most Haute Couture of his art was mired in the fires of anime and comic books.

That love of American comic books, one which many of Japan’s most successful creators like Dragon Ball’s Akira Toriyama and the head honchos at Studio Trigger share, did Yoshitaka Amano a lot of good at his first big job. As said, he got his start in animation working on the pivotal Speed Racer when he was still a teenager at Tatsunoko Productions. Clearly he must have impressed someone, because within five years he had become one of their top character designers. What was Tatsunoko making at the time that naturally lent itself to both the talents and the particular interests of the then young artist? As the header just above this paragraph has already hinted at, you could deduce the answer to the question being ‘superheroes’. Of course, we’re not talking about Batman or Superman here, but a Japanese version of heroes that has more in common with Power Rangers than the Marvel Cinematic Universe.

Yoshitaka Amano was churning out character after character in costume after costume from 1967 through 1982 at what we can now call a legendary stint at Tatsunoko. Aside from Speed Racer himself, Amano’s responsible for the vast majority of their iconic 70s characters who were synonymous with kids in Japan at the time. You have the Science Ninja Team Gatchaman pictured above, still a household name, but Amano also brought us the robot hunter Casshern, Doronjo and the Yattermen, and several other nostalgic creations. To this day, due in part to the Final Fantasy God’s contributions, those shows remain such mainstays in people’s hearts that decades and decades later, they are still reconfigured for modern audiences. We wrote about the series of excellent Tatsunoko reimaginings here, if you’re interested.

Vampire Hunter D, and other times Yoshitaka Amano turned his own book-illustrations into anime.

Yoshitaka Amano decided to part ways with Tatsunoko Production in 1982 and quickly embark on the journey known as ‘freelancing’. While he had a good reputation professionally, this was well before the artist would obtain Final Fantasy levels of immortality. What we’re trying to say is, the man had to hustle to make it on his own. He was still contributing to anime of the time, like Genesis Climber Mosspaeda, something called Radio City Fantasy, and most surprisingly the notorious Twilight of the Cockroaches, which combines live-action footage and animated cockroaches. Yes, I’ve seen it, but didn’t realize until researching this piece that Amano worked on the title, as Kefka does not look like a Cockroach. In addition to animation work though, Amano had been doing a lot of book illustrations, like for The Guin Saga and The Legend Of Arslan, as even big boy books in Japan often come accompanied with pictures. Early on he got hooked up with Sci-Fi / Horror other Hideyuki Kikuchi and provided him with drawings for Demon City Shinjuku and more notably, Vampire Hunter D.

If you want to impress an old school anime fan, name drop ‘Vampire Hunter D‘ in conversation. When they inevitably ask you ‘which one is better?’ answer ‘Bloodlust, but the original is good too.’ Hideyuki Kikuchi’s long-running future dystopian Vampire series (don’t see that combination of words together too often) has enjoyed beautiful Yoshitaka Amano illustrations since its very beginning in 1983. On two occasions that series got feature film adaptations, Vampire Hunter D in 1985 and Vampire Hunter D: Bloodlust in 2000, and both times Amano contributed designs for the film versions. They’re both classic anime horror films in their own right, but if you’ve ever wanted to see beautifully preserved Yoshitaka Amano art prance about the screen, they’re both essential watch. With their film budgets, they were really able to keep to his original designs more than the weekly made-for-kids Tatsunoko stuff could ever.

Angel’s Egg: The Most Amano Anime (with help from Mamoru Oshii)

The director of both Ghost In The Shell, and more impressively Patlabor 2, Mamoru Oshii usually receives the credit for the one-of-a-kind 1985 experimental OVA film Angel’s Egg. As the artistically ambitious film’s director, he’s well owed that credit for nailing its particularly cold atmosphere and successfully animating those detailed visuals. Yoshitaka Amano, who was allowed to explore some of his more out-there illustrative affectations for the film, provided those detailed visuals. Amano did character design and concept work for Angel’s Egg, and he also co-created the story hand in hand with Oshii. The largely silent film is not for everyone certainly, even by Oshii’s already dry standards, but it remains one of the most haunting cinematic experiences ever birthed from pen and paper, thanks in no small part to Amano.

Amano started contributing art for Final Fantasy just two years after the 1985 Angel’s Egg and Vampire Hunter D film combo, and the rest d history. For a while, he still kept up with book illustration gigs but largely fell off his anime work as he became more interested in the potential of Capital I illustration. He earned it though, intrinsically refining comic book illustrations into superhero anime designs and that into fancy RPG denizens. In each stage of his career, he designed unique characters and put to paper lavish artworks that would stun audiences for many tens of years. At 68 he’s not working as hard as he used to, but his fingerprints can be still found smudged all over pop-culture, forever altering its image for the better.

Yoshitaka Amano: The Name of the Concept Art Final Fantasy