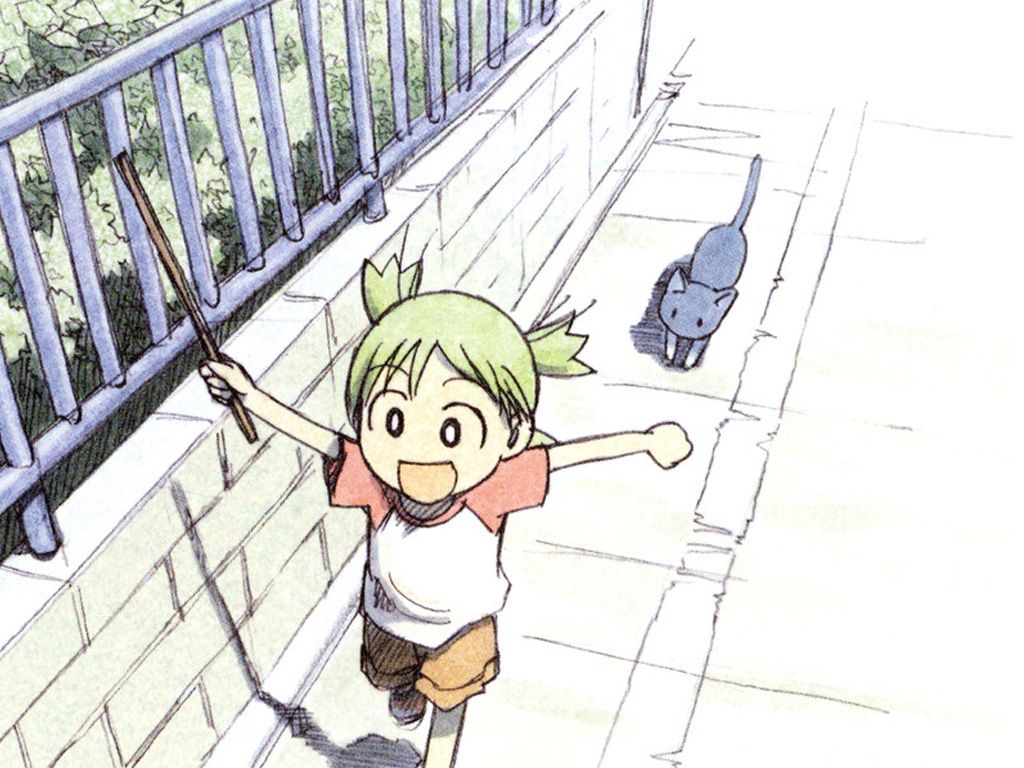 Yotsuba& is something of a miracle. Every single volume, every single chapter, every single page is guaranteed to put a smile on your face. No matter what happened to you earlier in the day, everything from small annoyances to huge traumatic events can be completely cured by Yotsuba and her four-leaf clover reminiscent hair.

Okay, maybe that’s a little much but we can definitively say this series is a delightful read every step of the way. Plus, if you’re interested in learning Japanese it’s great for beginners! Although the comic is readily available in English thanks to Yen Press who rescued the title after ADV folded in 2008.

Yotsuba&, possibly the purest slice of life manga in existence, is the masterpiece of one Kiyohiko Azuma. Before striking platinum with this series, he had already struck gold with Azumanga Daioh, a series that eventually led to the likes of K-On!, Hidamari Sketch, and the other daily life favorite. Not sharing Azumanga Daioh 4 panel strips limited format, Yotsuba& reaches new heights.

Azuma decided to take what he learned about portraying daily life, leveled up his illustrative abilities, and unleashed the green-haired little terror around the world. While volumes only come out once every couple of years now, the girl’s basically a national treasure.

Everyone Should Read The Yotsuba Manga

Look. I’m going to keep it real for a second. I don’t care if you only like reading manga that has weirdly angsty teenagers trying to kill other weirdly dressed angsty teenagers. It doesn’t matter that your favorite anime is Puella Magi Madoka Magica. Really, I don’t need to hear about your Konosuba and your RE:Zero obsessions.

Regardless of what type of anime and manga you usually prefer, whether it’s seinen or shoujo, old or new, Yotsuba& is such a bright, one of a kind title that there’s nothing like it in any other artistic medium much less manga.

Yotsuba&, or Yotsubato in the original Japanese, has won a number of awards and accolades over the years like the 2016 Osamu Tezuka Culture Award and deservedly so.

Kiyohiko Azuma captures childhood wonder as well as the magic we all take for granted in everyday life and blends these two in such a way that even the most hardened, jaded adult will be moved to tears. The way Azuma depicts simple scenes like a child whose dancing in the rain for no other reason than to dance in the rain is, as we said, a miracle.

The series has been running since 2003, shortly since the end of Azuma’s previous Azumanga Daioh, but so far they’re only 14 volumes. They read quickly too so you can catch up now, because who knows how long it’ll be until the next one.

There Will Never Be A Yotsuba Anime

For years, for years, a Yotsuba& anime has been one of the biggest collective desires of the otaku fandom worldwide. Fans want to see Yotsuba draw on her dad, go shopping with neighbors, and argue with the notorious Yanda live and in color! Unfortunately, however, Kiyohiko Azuma has said time and again that there will never be Yotsuba& anime. He says conceptually the story’s made to exist in the manga format and that something would be lost if it was made into full production.

While we can’t blame the creator for being protective of his darling child, we wonder if that is just conceit. The Azumanga Daioh anime is every bit as charming as its manga, and we’re sure there’s someone out there that could do the Kowai family justice with the proper budget. Could be too much of a good thing though, as the saying goes.

The Koiwai Family and Close Friends

Of course, Yotsuba herself is the main character of Yotsuba& but just as important to the series are her father and his old friend who are close enough to be family. After all, we do need some adult supervision for this particularly adventurous child.

The title character, the main attraction, the real reason we’re all reading this comic. The wide-eyed Yotsuba wears a smile constantly, being a delightful, charming 6-year-old girl who finds the wonder and magic in everyday life. Even the most jaded reader will crack a smile when reading about her exciting exploits.

With hair that resembles a four-leaf clover, Yotsuba is an instantly recognizable character. Despite never making the leap to animation, she’s known to everyone in Japan with her manga always selling copy after copy. If only Yotsuba& volumes came out more than once every two to three years.

Yousuke, as he puts it, sort of took Yotsuba home with him one day when visiting some other country. Her adopted father, Yousuke Koiwai works at home and prefers to just wear boxers all day if he can get away with it. While often tired you can occasionally still spot vestiges of his youthful outlook bubble to the surface.

An old friend of Yotsuba’s Dad, Jumbo’s around often enough that he’s practically her uncle. Nicknamed Jumbo for being tall, if you can believe that, he’s a kind soul who runs his family’s flower shop. A genuinely nice guy, but nervous around women.

Another old friend of Yousuke and Jumbo but he lacks the maturity of his adult pals. Yanda’s the type of guy who will antagonize the six-year-old Yotsuba, but that’s also why he gets along with her. He’s not bad at heart but sometimes takes the joke too far when he does encounter Yotsuba.

As important as the Koiwai family to the story are the Ayases who live next door. Quickly befriending Yotsuba, they more or less become the sisters and mother she never had in her single dad only child household. For real, Yotsuba essentially has free reign of their house.

The first neighbor Yotsuba meets after moving to her new home. Fuuka’s a plucky high school girl who means well but is a little embarrassed about her pudge. She’s taken to Yotsuba and is always happy to hang out with her new little sister.

The smarter younger sister. down to earth and filled with natural curiosity. Despite being more studious and more confident than her older sister Fuuka, Ena is also always happy to take time out of her day and play with Yotsuba. She often brings her more abrasive and tomboyish friend Miura along for the ride.

Asami rounds out the lovely Ayase trio as the trendy older sister. In her early 20s, she does less hanging out with Yotsuba than Fuuka or Ena but she’s good at entertaining the young lady in a punch. Jumbo has a huge crush on her, but can’t seem to get the words out.

Yotsuba doesn’t have a Mom of her own and so she’s taken to calling the neighbor girl’s mother ‘Mom’. Mrs. Ayase’s first name has yet to be revealed so it’s just as well. She’s a considerate soul who lets Yotsuba do as she pleases out of the kindness of her heart.