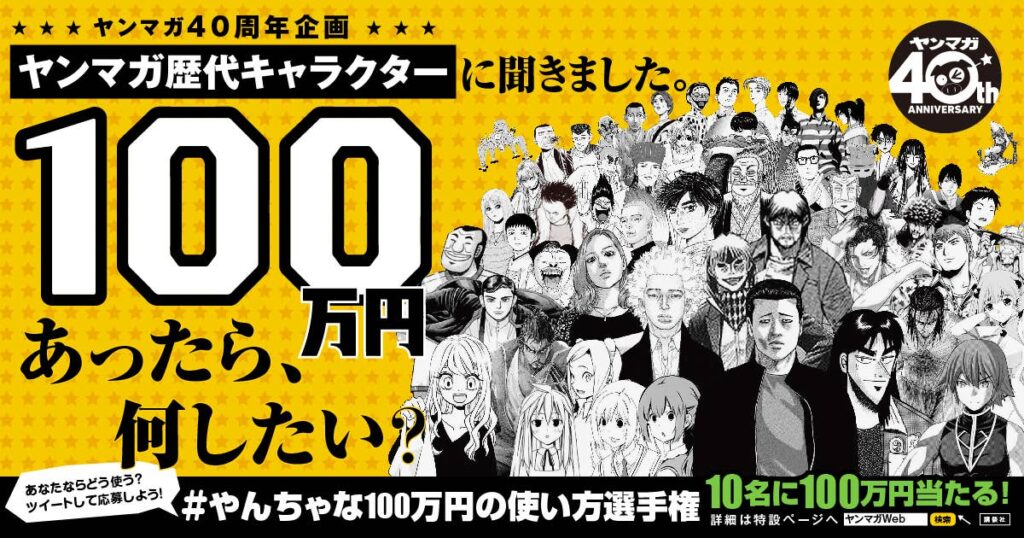 The Young Magazine 40th anniversary is the gift that just keeps on giving. Aside from the strange focus on gravure, we recently got news that Dr. STONE and Sun Ken Rock creator Boichi would be returning to Weekly Young Magazine with an original story for the first time in four years. And now, you could be in with the chance of winning some cash, as Young Magazine is asking the question: “If you had 1 million yen, what would you do?”

You can submit your answers via Twitter by using the hashtag #やんちゃな100万円の使い方選手権 (lit. Cheeky 1 Million Yen Usage Championship) and following the official Young Magazine account. You will then be entered into the prize draw to win 1 million yen, which is roughly $9500 USD. Ten people will be chosen, so you do have a fair shot.

There is also a large billboard on display right now over Shibuya Station, featuring many different Young Magazine characters. The inclusion of characters from Kaiji – the titular protagonist, as well as Ootsuki (Hanchou) and Hyoudou – is pretty hilarious as that series has already long since surpassed the measly sum of 1 million yen, currently attempting to make it out alive with 2.4 billion yen (around $22 million USD). 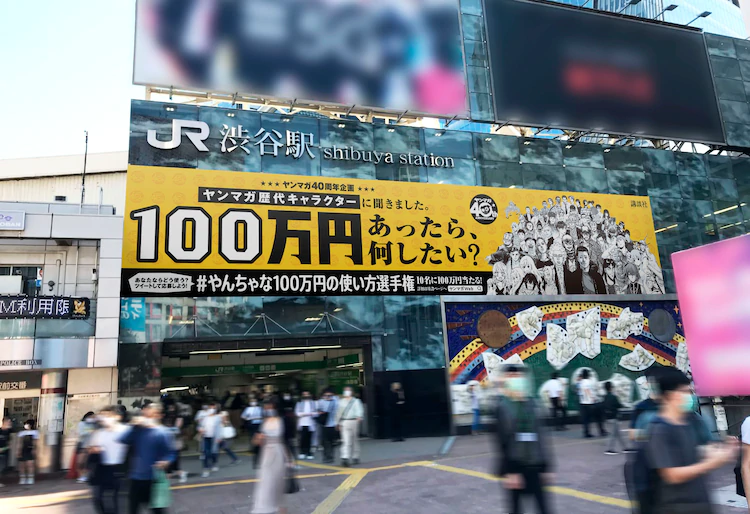 Still, this is one hell of a way to draw attention to your 40th anniversary, and large numbers of people have already submitted their entries to Young Magazine’s 1 million yen campaign. @hukumizon says that they would “Give 100,000 yen to 100 people every day” while @TzCNjhNhXorGQ4X (inventive username, I know) says that they would “Turn it all into one yen coins and stone someone to death.” Very cool and normal.

Unfortunately, Young Magazine’s 1 million yen campaign is only applicable to those living in Japan, so overseas fans can’t take advantage of Kodansha’s generosity. But it is still entertaining to think what one would do with such an amount of money: I’d probably put it towards my next trip to Japan, whenever that can happen.

You can win 1 million yen by entering Young Magazine’s 40th anniversary campaign. Check out the official website for more details.