Hello there, and welcome to the inaugural edition of Your Manga Week. With all the manga that realizes on a weekly basis, keeping up with everything can be a pain. That’s why I’ll be here every week to highlight what’s worth taking time out of your busy schedule for, as well as discussing story developments as they come. This week, we’re chatting My Hero Academia chapter 245, Mitama Security: Spirit Busters chapter 6, Samurai 8: The Tale of Hachimaru chapter 21, and Double Taisei chapter 20.

Last week’s My Hero Academia left on a bit of an unusual cliffhanger. Deku, Todoroki, and Bakugo had arrived at Endeavor’s hero agency for their work placement, only to find themselves thrust into action against a supervillain. Then, the two-faced number two hero Hawks suddenly appeared out of nowhere – making coded overtures to Endeavor that something was very, very wrong. 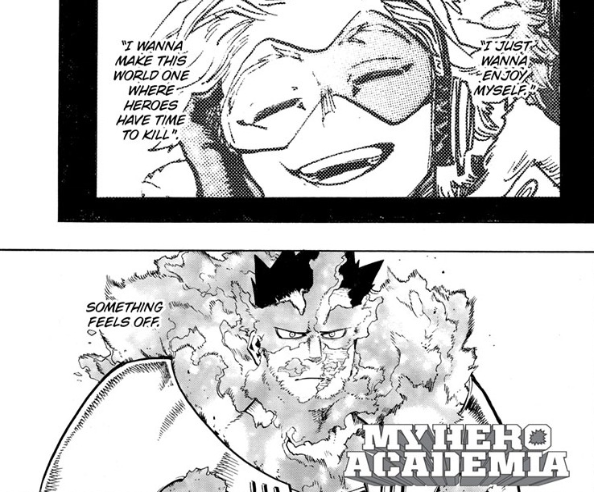 This week’s chapter 245 clues us into what’s about to hit the fan in the My Hero Academia world. Through clever word usage and a coded message delivered through highlighted portions of that book on the history of the Meta Liberation Army that started the whole last arc off on its wild ride, Hawks manages to tell Endeavor not only that has the League of Villains taken over the Meta Liberation Army, but that they’re planning a massive attack very soon. 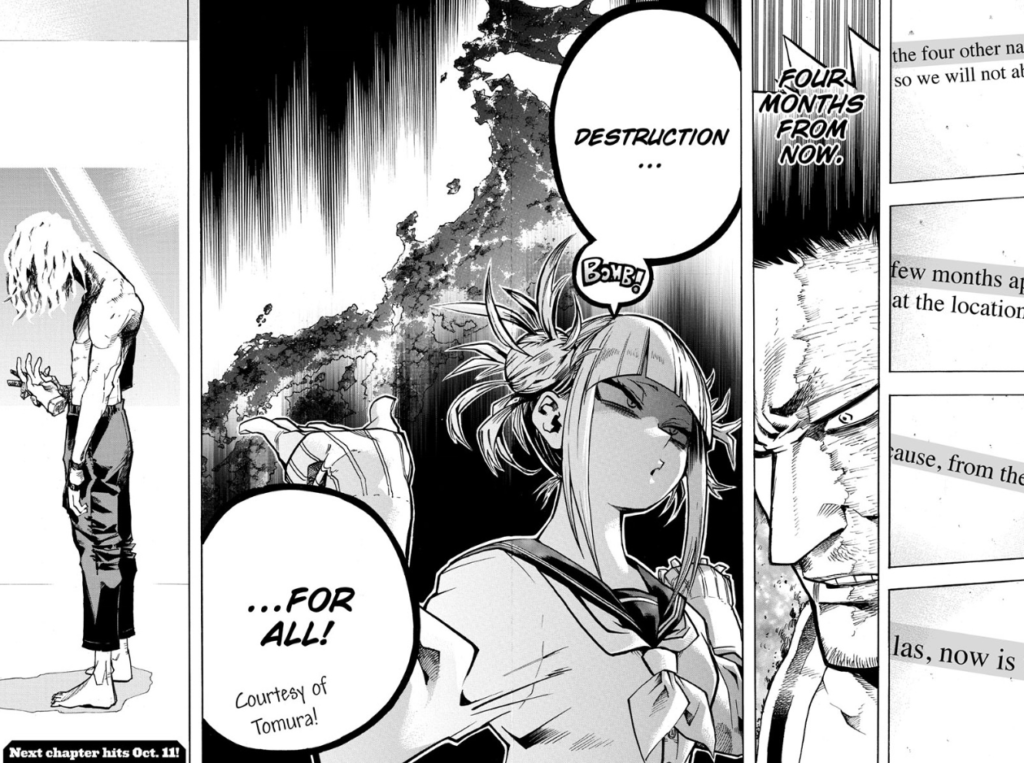 With the last arc hinting that ‘Super-Nomus’ were a thing, I wouldn’t be surprised if author Horikoshi Kohei is gearing up for another arc of carnage to rival the lauded Kamino incident. There’s also Toga’s hint that Shigaraki has somehow leveled up his destructive power even further – consequently begging the question of whether Deku might see a change in his ability during this arc, in turn. Either way, it’s safe to say that I’m very excited to see what’s to come.

Now here’s a series that has really reversed its fortunes in recent weeks. When Mitama Security first began in September, each chapter fell flat and I was seriously unamused. Chapter 6, however, stands as a testament to how fast things can change in a serialized medium.

Much like last week’s chapter, Mitama Security: Spirit Busters chapter 6 forsakes the loose, gag-heavy narrative that bogged down early chapters and instead together strings a comedic narrative based on escalating stakes.

This time, Mr. Mitama finds himself in an unusual situation where he wants to take his ‘client’ Rena Haze to eat some tapioca – it’s quite in vogue in Japan right now – but there’s a ghost hanging about the store trying to nab some. Their dying wish was to be oshare (in fashion), it seems. 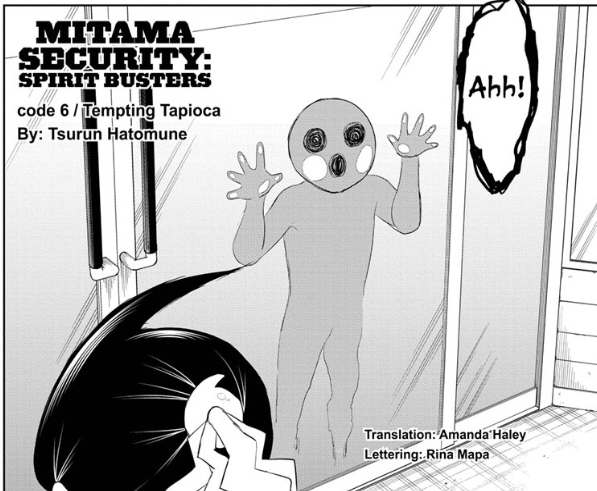 Naturally, Mitama’s aversion to all things ethereal means that he’s too scared to go in, but at the same time, he really wants to show Rena how delicious the store’s tapioca really is. That premise is already absurd enough, but what gives it wings is how the stakes constantly rise throughout the chapter as the number of ghosts first multiply, then Mitama is attacked by a robber, then his rival Soya arrives to goad him, then… you get the idea.

This kind of structured approach gives the series something to fall back on other than gags, which author Tsurun Hatomune doesn’t seem to have a keen affinity for. In actual fact, what ends up happening is that the gags arise from the narrative itself, making them much more natural. They also naturally come from the characters’ contrasting personalities, which are developing in wondrous ways. I especially like how Rena Haze has essentially become the straight man of the unhinged group. Needless to say, I’m very happy with the way that the series is developing and I’m looking forward to reading more.

Samurai 8: The Tale of Hachimaru chapter 21

We now pass from the positive into the negative. Safe to say, I haven’t been impressed with Masashi Kishimoto’s new series Samurai 8 ever since it launched in May, and this chapter doesn’t do much to get me back on its side.

Truth be told, last week’s chapter left off on a positive note. After a fight between Hachimaru and new characters Ryu and Kotsuga, the ragtag crew then landed on a mysterious planet in search of one of the ‘keys’ to Pandora’s Box (don’t worry too much about the jargon). But not long after they stepped foot on the planet, they suddenly came under assault by a giant group of samurai – learning that they had become unwitting participants in a battle royale. 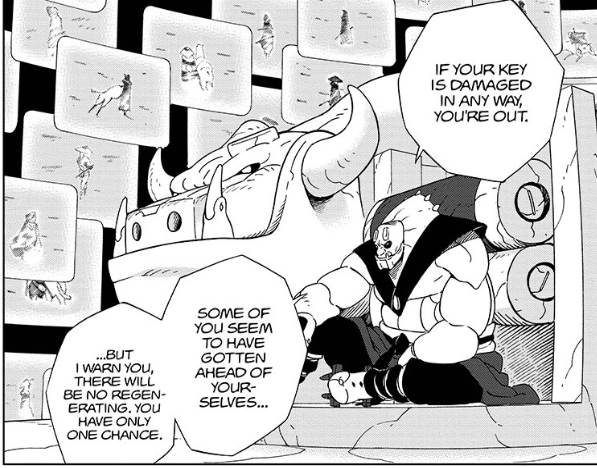 I don’t know about you, but a samurai battle royale sounds pretty awesome. In between chapters 20 and 21, I was thinking about all the ways in which Samurai 8 could deliver on this cool premise, especially given how much I jived with Sword Art Online Alternative Gun Gale Online.

Unfortunately, chapter 21 showed that this was not to be the case. Hachimaru and crew defeat the assaulting samurai with ease, then a series of panels show them defeating other participants in a sort of montage. Then, the chapter ends with Hachimaru facing up against yet another samurai in yet another one-on-one duel. 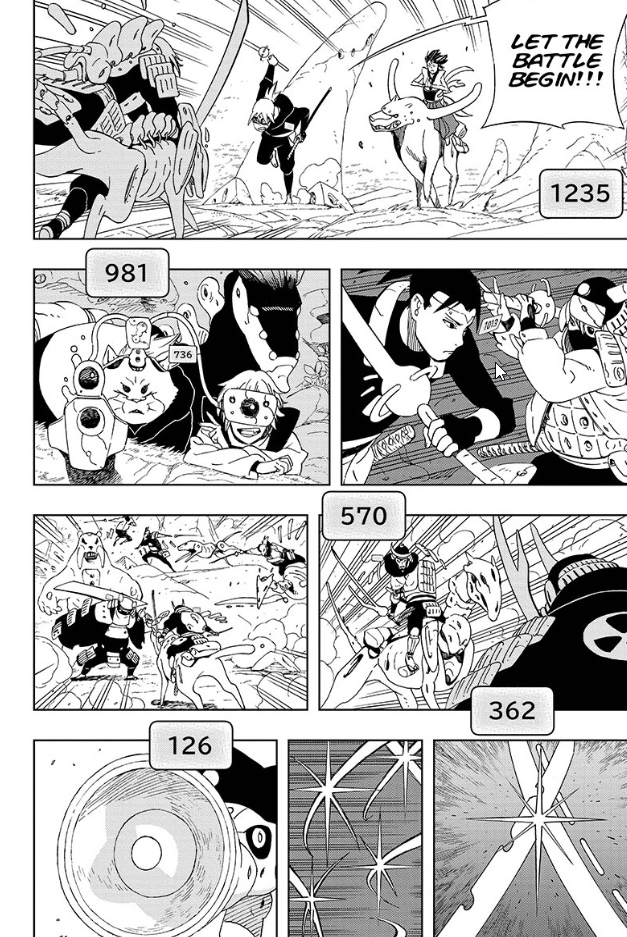 Not only did Kishimoto already do a samurai duel the week before, but he also opted to do this once more in favor of what could have been a seriously cool arc. My only question is: why?

Is Kishimoto simply out of touch? Or is he taking the wrong advice from the wrong people (eg. his editor)? I don’t know the specifics, but what I do know is that chapter 21 of Samurai 8: The Tale of Hachimaru demonstrates that the series isn’t getting better any time soon.

Finally, we come to chapter 20 of what I would consider the current plucky underdog of Weekly Shonen Jump: Double Taisei.

Since I reviewed the series in September, things have gone off the rails just a little bit. The series got stuck into a rather shogi-centric arc around chapter 12, going against everything I praised it for based on the initial chapters. While the art for the various matches has been pretty decent, both the story and characters haven’t been all that compelling. Thus, I went into chapter 20 with very low expectations. 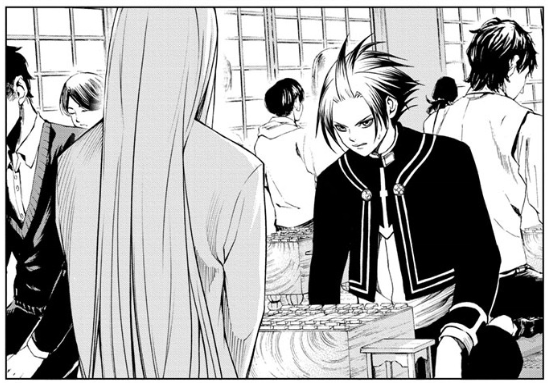 Things start off as typical as ever. Sei is playing off against Meguru Dodo in the final shogi pro qualifying match, which is used as an opportunity to explain the opponent’s backstory. Essentially, by some miracle, all boys in the Dodo family end up living the same lives as their ancestors: they are all born on the same day, die on the same day, follow the same career path and even end up with the same hair. Don’t think too hard about it, you’ll tie yourself up in knots.

This provides a little bit of context to why Meguru has been harping on about ‘destiny’ for the past couple of chapters – but then, a bombshell. Wanting to escape his destiny, Dodo poisons himself during the match and the chapter ends with what appears to be Sei mourning in front of his gravestone. 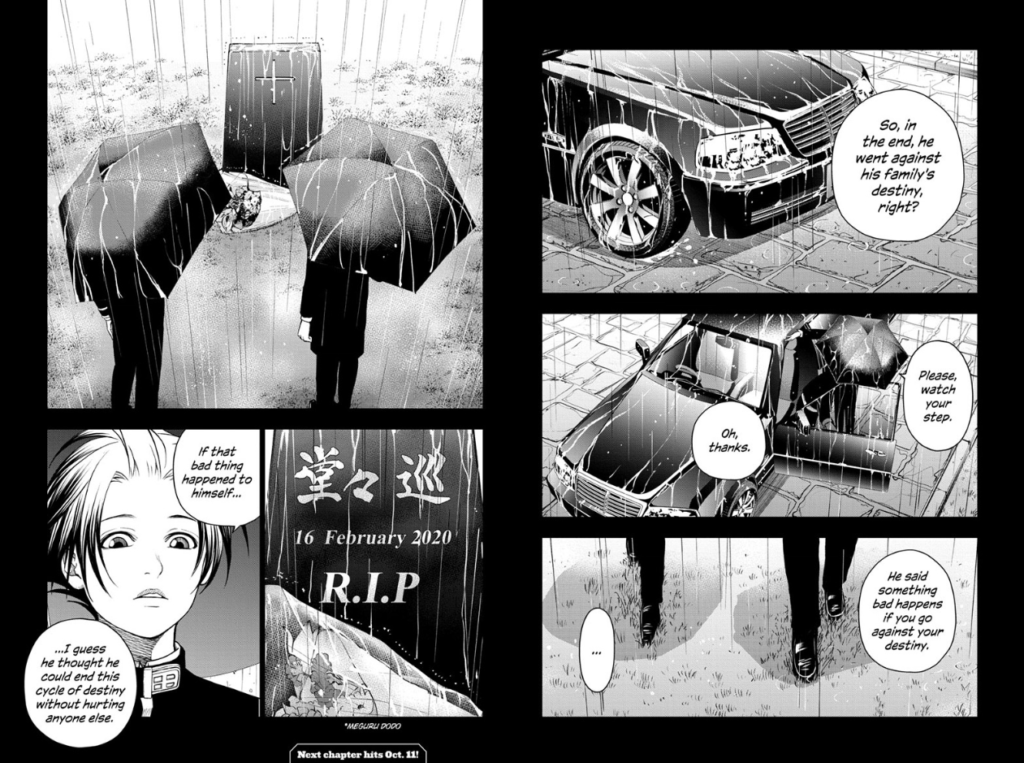 Talk about an unexpected development. Double Taisei has always been a little unusual, but chapter 20 really does come straight out of left field.

That being said, whether or not the series will stick with this bombshell ending is uncertain – the background of the aforementioned mourning scene is rendered in black, suggesting that it is a memory. Given this, we could very well be looking at the death of another Meduru Dodo, perhaps one of his ancestors.

Nevertheless, that’s certainly one way to get people paying attention to your series once more. I’ll be looking forward to seeing the long-term repercussions of this ending (if any) when chapter 21 launches next week.